"You're a man on an island by yourself," Smith said. "How long can you stay there?” 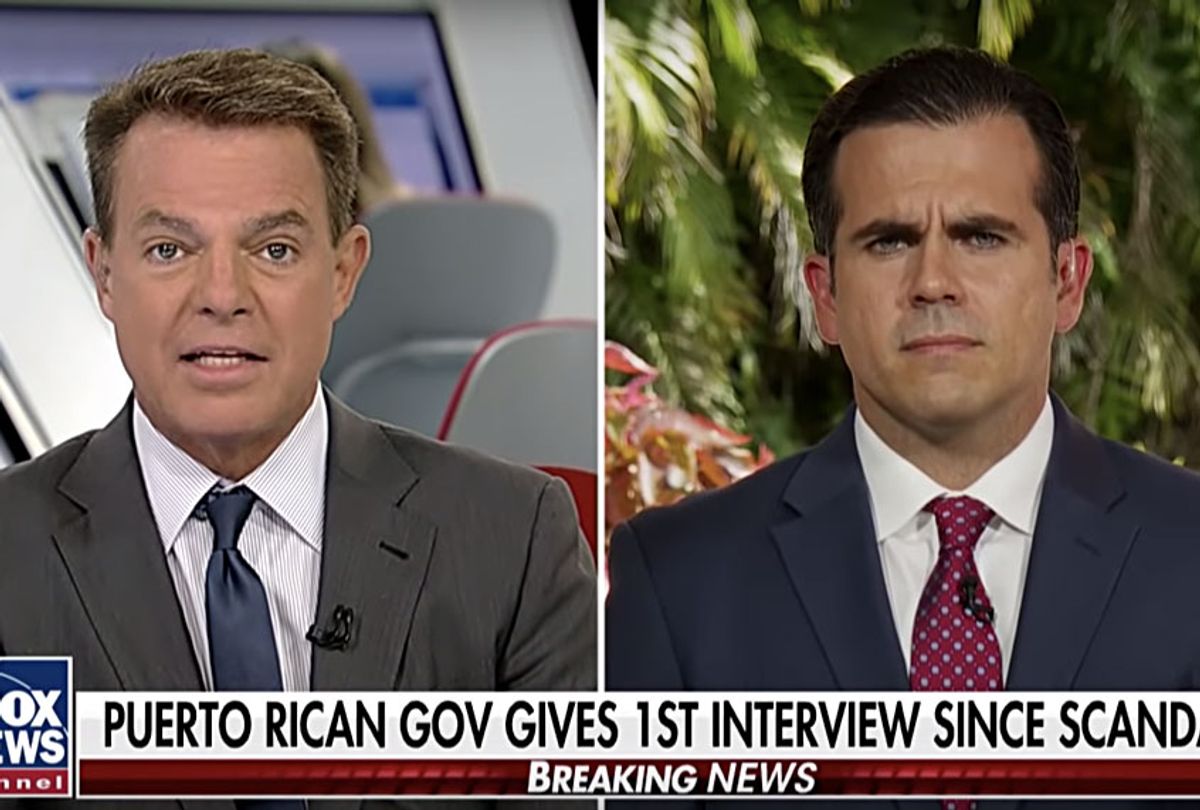 Fox News host Shepard Smith grilled embattled Puerto Rico Gov. Ricardo Rosselló over his refusal to step down from office as hundreds of thousands of the island's residents have demanded.

Protesters took to the streets of San Juan and other parts of the island on Monday, waving the Puerto Rican flag, banging pots and pans and chanting "Ricky, renuncia!" (Ricky, resign!) as part of the "March of the People" — the island's largest protest in recent history.

"The corruption is rampant in Puerto Rico," Smith said Monday in an interview with Rosselló that lasted more than 20 minutes.

"Economically, there's a fiscal crisis," Smith continued. "Attacks on women, gays, dead relatives on your own island. And, after that, who is left to support you? And is it even safe for you to continue to attempt to govern?"

"I've apologized for that. I'm making amends for all those efforts," the governor replied, arguing he was committed to tackling the extensive corruption that has thrived under his leadership.

Rosselló is facing mounting pressure to step down amid a corruption scandal involving former members of his administration and leaks of hundreds of profanity-laced, homophobic and sexist private chat messages exchanged between the governor and members of his inner circle.

Protesters have said they will not stop until Rosselló resigns. Rosselló has maintained that he will not seek reelection but at the same time vowed to finish out his term. He has also resigned as President of the New Progressive Party.

The governor on Monday acknowledged that mistakes had been made but reiterated his plan to stay in office.

"Mistakes are things you do that you didn't mean to do — or that you did by accident or in error — and then you go back and you correct them," Smith responded. "Nine-hundred pages of attacks on people of your own island are arguably not mistakes."

"They no longer trust you and your leadership," Smith said.

In the leaked chats , Rosselló mocked an obese man he had posed with in a photo; called former New York City Council Speaker Melissa Mark-Viverito a "whore"; made homophobic remarks about pop star Ricky Martin; and argued that San Juan Mayor Carmen Yulín Cruz must be "off her meds" for running against him for governor in 2020.

The group chat members also joked about the casualties caused by Hurricane Maria, which tore through Puerto Rico in September 2017.

Many see the scandal, which some are calling "RickyLeaks" and "Chatgate," as the last straw for an island that is still reeling from the destruction of Hurricane Maria, which killed thousands of people and left even more without power — all amid a decade-long financial crisis.

"The corruption was in your own administration," Smith told Rosselló on Monday. "And five people who were on those chats — you got rid of all of them. They are now out of the government, but you remain. Doesn't the buck stop with your office, governor?"

Still, the governor did not back down from his plans to govern for the remainder of his term, pointing out that Puerto Ricans elected him, despite the thousands of demonstrators who are now calling for his immediate ouster.

"You're a man on an island by yourself," Smith said. "How long can you stay there?”

Again, Rosselló argued that he needed to remain in office in order to fight the very corruption that thrived under his leadership and "follow through on some of the efforts that I established for the people of Puerto Rico."

However, pressed repeatedly by Smith to name a single person who supports him remaining in office, the governor could identify just person ― San Sebastián Mayor Javier Jiménez.

“It’s not true that I support the governor,” the mayor later told Fox News.