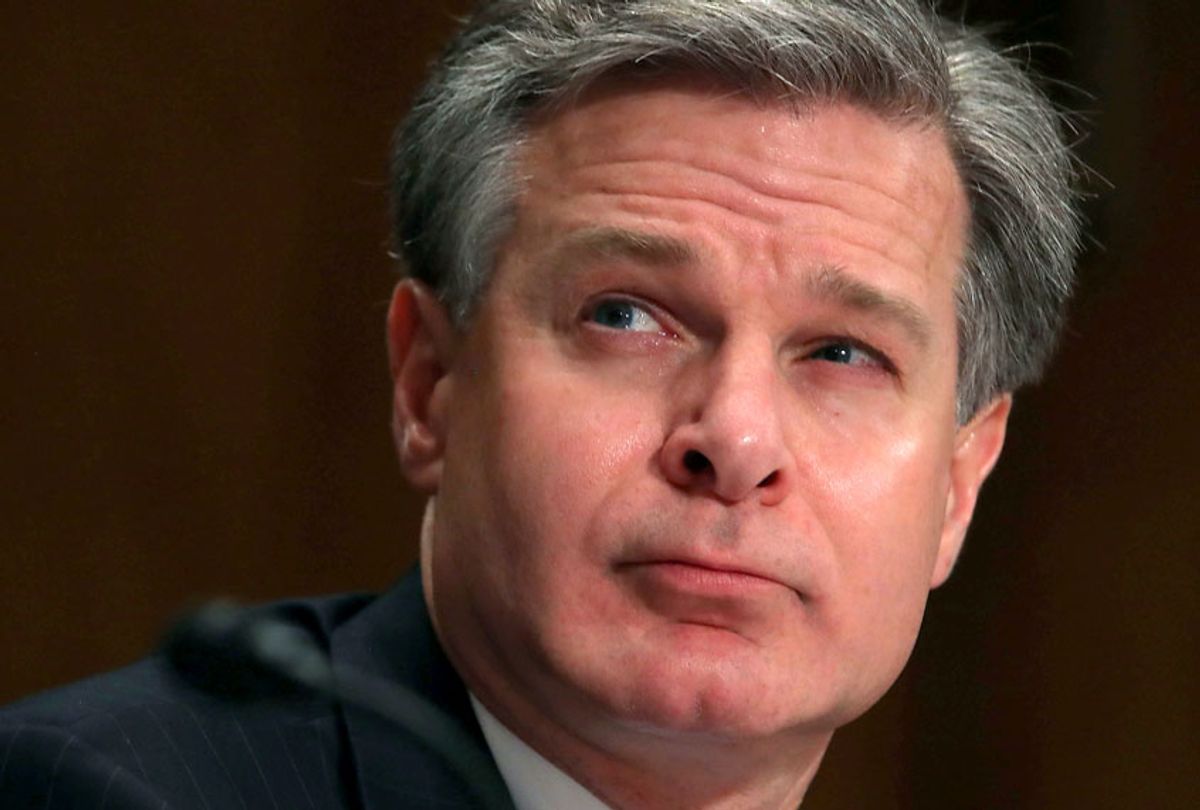 FBI Director Christopher Wray told Congress on Tuesday that the agency has seen an increase in the number of domestic terror arrests this fiscal year, a majority of which have been motivated by white supremacy.

Wray told the Senate Judiciary Committee that the FBI has recorded about 100 domestic terrorism arrests in the last nine months. “A majority of the domestic terrorism cases we've investigated are motivated by some version of what you might call white supremacist violence,” he told the panel.

Wray’s testimony followed a House Homeland Security Committee hearing in May, where FBI counterterrorism chief Michael McGarrity testified that the bureau was investigating 850 potential domestic terrorism cases. McGarrity said that nearly half of the cases involved racially motivated extremists, most of whom were white supremacists.

During Tuesday’s hearing, Sen. Dick Durbin, D-Ill., pressed Wray on concerns that the bureau was not prioritizing white supremacist domestic terrorism under President Trump. Trump has previously said there were “fine people” marching with neo-Nazis during the Charlottesville violence of 2017 and denied that white nationalism was on the rise after a deadly attack at two New Zealand mosques killed 51 people.

“There is a concern that this is not being taken as seriously as it should be as one of the real threats in our country,” Durbin told Wray.

“We take domestic terrorism or hate crime — regardless of ideology — extremely seriously, I can assure you, and we are aggressively pursuing it using both counterterrorism resources and criminal investigative resources and partnering closely with our state and local partners," Wray replied.

Durbin questioned whether the bureau was treating homegrown terror threats as seriously as it treated international terrorism.

“What you have just said is significant, if the number of people arrested this calendar year when it comes to this extremist conduct, is about equal between those who were inspired by foreign actors, ISIS, al-Qaida, whatever it might be, and those who were inspired by white supremacy or at least some version of race,” Durbin said, before asking Wray if he considered them equal threats.

Wray said he did not, explaining that he believes homegrown violent terrorism was the single biggest threat to the country.

Despite the rise in arrests this fiscal year, domestic terrorism arrests fell during the first two years of the Trump presidency. The FBI arrested about 150 terrorism suspects in 2017, which fell to 120 last year, where it is on pace to hit again this fiscal year, the Washington Post reports.

While the FBI may again be increasing its arrests of violent white supremacists, few are actually charged with terrorism, unlike suspects of foreign origin or with overseas links.

Out of about 100 domestic terrorism arrests in 2018, just nine defendants faced terrorism charges, according to the Post.

“Unless the public understands that terrorism cases don’t necessarily mean terrorism charges or convictions,” he said, “you don’t get a sense of the scope of the threat, whether it’s domestic terrorism or international.”