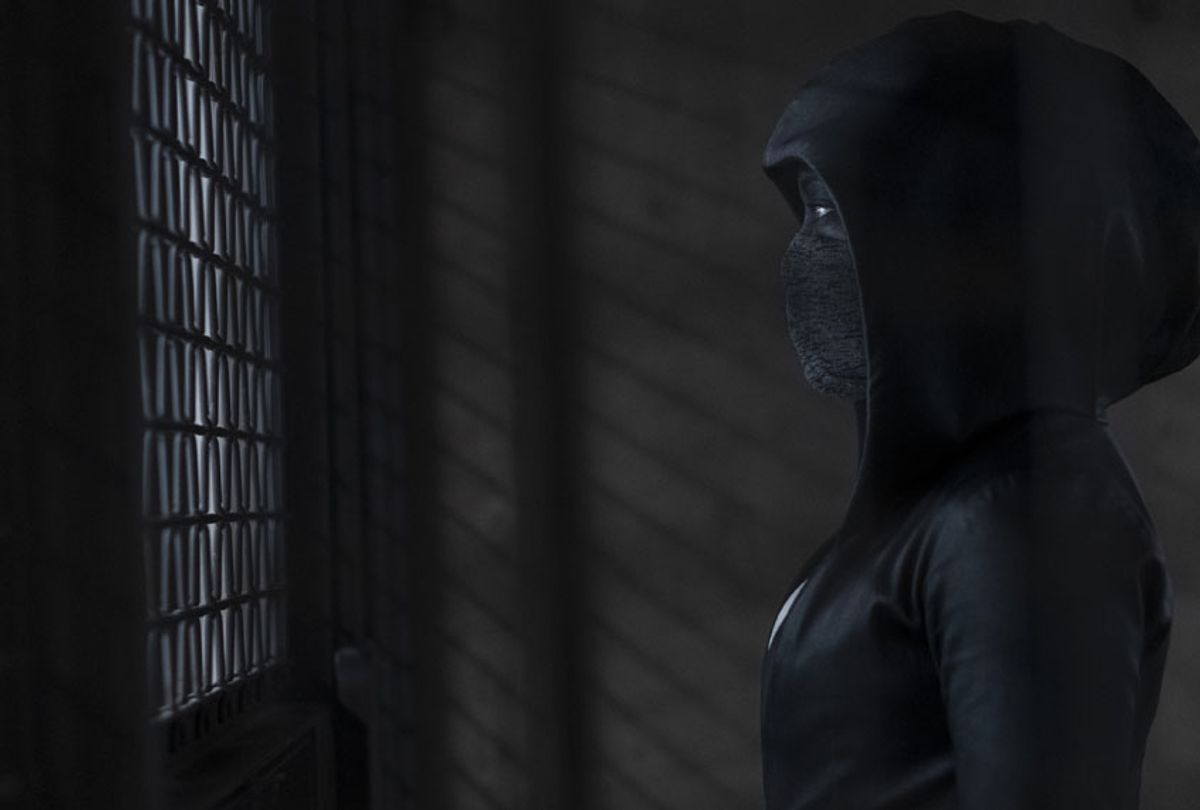 Those anticipating HBO's series adaptation of “Watchmen,” the classic comic book series co-created by Alan Moore and Dave Gibbons, may have divided opinions of the 2019 version conceived by Damon Lindelof, co-creator of "Lost" and "The Leftovers."

The first episode, the only part of the nine-episode season HBO made available to critics,  introduces the story's ostensible protagonists: Tulsa's Police Force. And the enemy? It’s a white supremacist organization whose members wear masks inspired by the iconic "Watchmen" character Rorschach.

“What, in 2019, is the equivalent of the nuclear standoff between the Russians and the United States?” Lindelof posited Wednesday during a press conference, referring to one of the key political flashpoints examined in the original comic. He answered, “It just felt like it was undeniably race and policing in America.”

Until now HBO has kept the details of “Watchmen” cloaked in mystery, teasing audiences with disconnected snippets. Reporters assembled for HBO’s press conferences at the Television Critics Association’s summer press tour screened a preview of the first episode on the condition that we refrain from posting reviews until the drama’s scheduled premiere in October.

You won’t find smartphones or references to social media in the story, either — a thoughtful detail from Lindelof, the man who quit Twitter after he’d weathered enough vitriol over the "Lost” finale.  Also absent, at least initially, are direct descendants of The Comedian, Nite Owl or other familiar heroes from the original’s 12-issue arc. Jeremy Irons has apparently taken on the mantle of Ozymandias, although HBO’s press notes only describe him as “the aging and imperious Lord of a British Manor.”

We can, however, describe Oscar winner Regina King’s role. She plays Angela Abar, a devoted wife, mother of three and bakery owner who ostensibly has retired from the Tulsa Police Force. But in this new world, cops hide their faces for their own protection (with the beat cops outfitted in colors associated with Silk Spectre) making Angela’s job as a lead detective a secret identity.

This aligns with the alternate history of Moore’s original “Watchmen” comics, released between 1986 and 1987, in which people with superhuman abilities emerged between World War II and the 1960s, changing the trajectory of history and granting the United States the upper hand during the Cold War.

Vigilantes and unaffiliated heroes are outlawed, and a few superheroes that haven’t retired go to work of the government. In Moore’s reality, America wins the Vietnam War, and Richard Nixon was never forced out of office. Term limits are abolished, in fact, allowing Nixon’s presidency to last well into the 1980s.

In presenting white supremacy as the main antagonist of these new chapters, Lindelof told the industry reporters assembled for HBO’s presentations at the Television Critics Association’s summer press tour, currently underway in Los Angeles, that he’s selected a crisis to which there is no simple answer or grandiose solution.

“In a traditional superhero movie the bad guys are fighting aliens. And when they beat the aliens, the aliens go back to their planet and everybody wins,” Lindelof said. “There’s no defeating white supremacy. It’s not going anywhere. But it felt like it was pretty formidable foe.”

The Watchmen are an inversion of Golden and Silver Age archetypes, revised to fit a dystopian extreme of what Moore and Gibbons imagined America could become with but a few minor tweaks to the timeline. It’s an incisive vision of unchecked imperialism that questions our culture’s reverence of might.

Lindelof stressed that the new “Watchmen” will not alter the original series in any way: “We explore the past…but it’s canon,” he said. “Everything that happened in those 12 issues could not be messed with.”

Instead, he contemplated how the history kicked off in those comics might have progressed from where the story leaves off. Lindelof explained that he was inspired by Ta-Nehisi Coates’ story in The Atlantic, “The Case for Reparations,” which lead him to read about Black Wall Street and the massacre of black families by white racist mobs in Tulsa, Oklahoma in 1921.

As a result, he connected Moore and Gibbons’ “Watchmen” past to his version of that world’s present. He explained to critics  that Nixon remained president through the late ‘80s and died in office. Then Gerald Ford assumed the presidency, only to be defeated in ’92 by Robert Redford, who remains in office in alt-2019.

“One of the things that we’re interested in exploring is what would happen if a very well-intentioned white man, a liberal white man, was president for way too long?” Lindelof said, referring to the fictional Redford presidency.

As Lindelof explained to critics, racism isn’t presented as a simplistic evil in “’Watchmen” but rather as a strain of white supremacy born out of a white liberal version of good intentions. Later in a conversation with a small group of reporters, Lindelof put a finer point on it.

“Watchmen” isn’t merely interested in flaming racists, he said.  "This show is trolling the white savior.”

For these reasons and others, it probably goes without saying that a segment of viewers will be predisposed against embracing his vision.  Foremost among them would be Moore, but that's to be expected. Moore has a reputation for being against any adaptations of his work, and not even Lindelof’s reverence for the source material enables him to win an exception.

“I have made personal overtures to connect with [Moore] and explain to him a little bit of what we were doing, and he made it clear that he didn’t want that to happen. And I want to respect that as well,” Lindelof said.  “… So, the wrestling match will continue.”

Lindelof added that he admires Moore’s “punk rock spirit,” saying that he imagines that “if you told Alan Moore in 1984 or ’85 or ’86, 'You’re not allowed to do this because Superman’s creator or Swamp Thing’s creator doesn’t want you to do it,' he would say, ‘F**k you, I’m doing it anyway.’”

He added in conclusion, “And so I’m channeling the spirit of Alan Moore to tell Alan Moore, ‘F**k you, I’m doing it anyway.’”