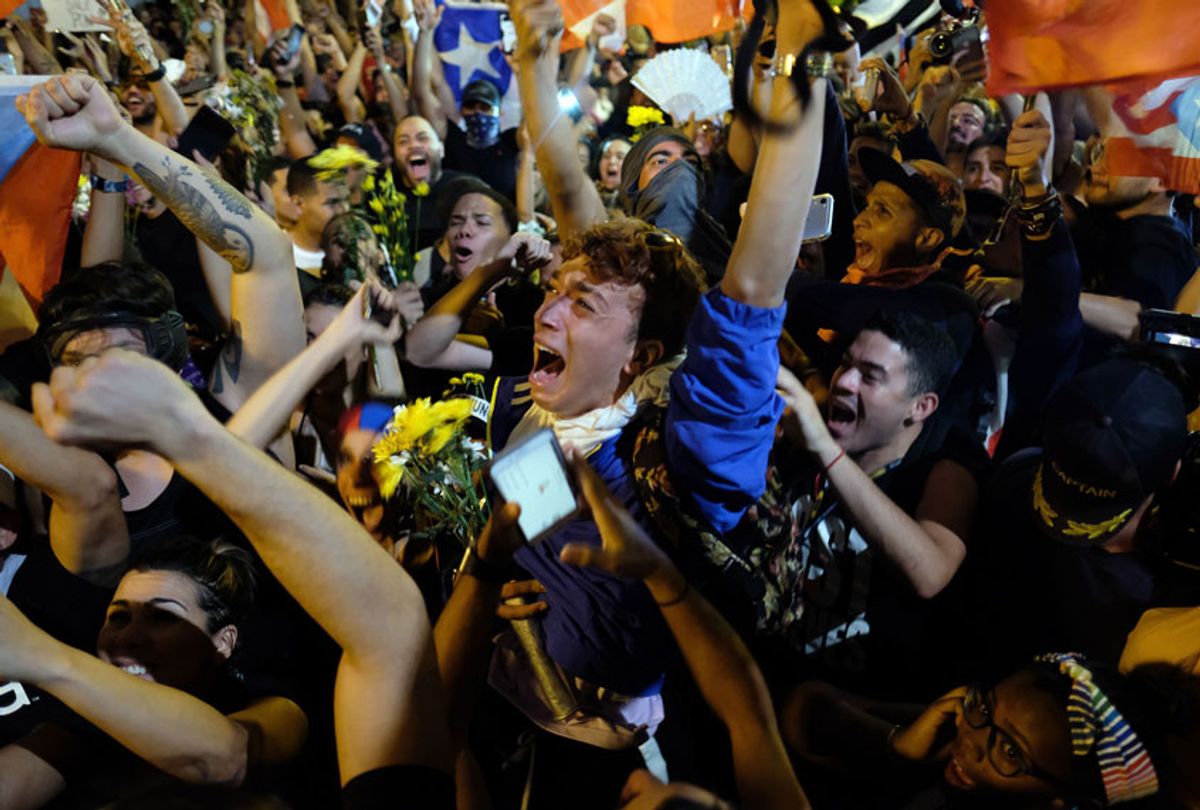 Demonstrators celebrate after the resignation message of the governor of Puerto Rico, Ricardo Rossello in front his mansion known as La Fortaleza in San Juan, on July 24, 2019. (Getty/Ricardo ARDUENGO)
--

Puerto Rico Gov. Ricardo Rosselló announced his resignation Wednesday, days after hundreds of thousands of the island's residents and other politicians called for his ouster amid a scandal involving leaked private chats and a widening corruption investigation.

His resignation, effective Aug. 2, came late Wednesday night on a recorded video published on Facebook. In the message, Rosselló said his "only priority has been the transformation of our island and the well-being of our people. The demands have been overwhelming, and I've received them the highest degree of humility."

Thousands protested outside of the governor's mansion, and video footage of the scene shows crowds in the streets immediately erupting in cheers and joyous chants after Rosselló's announcement.

"Ricky, te botamos!" ("Ricky, we threw you out!") the crowd exclaimed after the governor's announcement.

René Pérez Joglar, the acclaimed Puerto Rican reggaeton star also known as Residente, appeared to be in tears as he spoke to reporters about Rosselló's resignation.

"After my son's birth, this is the happiest day of my life. This is incredible. I've been waiting for this moment since I'm a little kid with my father," Joglar said outside the governor's mansion. The beloved island celebrity rallied thousands of people to protest against Rosselló.

Rosselló is the first governor to step down in the history of Puerto Rico. His resignation came after Carlos Méndez Núñez, the leader of the island’s House of Representatives, said Wednesday afternoon that an impeachment inquiry by three attorneys unanimously concluded there were legal grounds to begin the process to remove the governor.

Hundreds of thousands of Puerto Ricans protested for 12 consecutive days, demanding Rosselló's ouster. The demonstrations on the island continued to grow after Rosselló announced Sunday that he would not seek reelection but vowed to finish out his term. He also stepped down as president of the pro-statehood New Progressive Party.

On Monday, more than a half-million people took to the streets of San Juan and across one of the island's main highways, waving the Puerto Rican flag, banging pots and pans and chanting "Ricky, renuncia!" (Ricky, resign!) as part of the "March of the People."

The protest — the island's largest in recent history — came despite heavy rain showers and ended late in the night as police fired tear gas and pepper spray into crowds of demonstrators in an attempt to clear the streets.

The protests were triggered amid a corruption scandal involving former members of Rosselló administration and the leaks of 889 pages of profanity-laced, homophobic and sexist private chat messages exchanged between the governor and members of his inner circle.

Under the island's constitution, the secretary of state is first in line to succeed Rosselló, but Secretary of State Luis G. Rivera Marín, who was part of the chat scandal, resigned July 13 amid the uproar.

Justice Secretary Wanda Vázquez is set to succeed Rosselló at the moment.

"We will be working together to have a responsible and transparent transition process," she said in a statement. "Once the resignation is official, if necessary, I will assume the historic mandate that the Constitution of Puerto Rico commends."

Vázquez, who was appointed in 2017, is seen as a close ally of Rosselló. The hashtag #WandaRenuncia (or "Wanda, resign") started trending on Twitter immediately following Rosselló's announcement.

She initially described the leaked chats as "incorrect" but not illegal. She later announced that she would recuse herself from any investigation, because she had been mentioned in the chats.