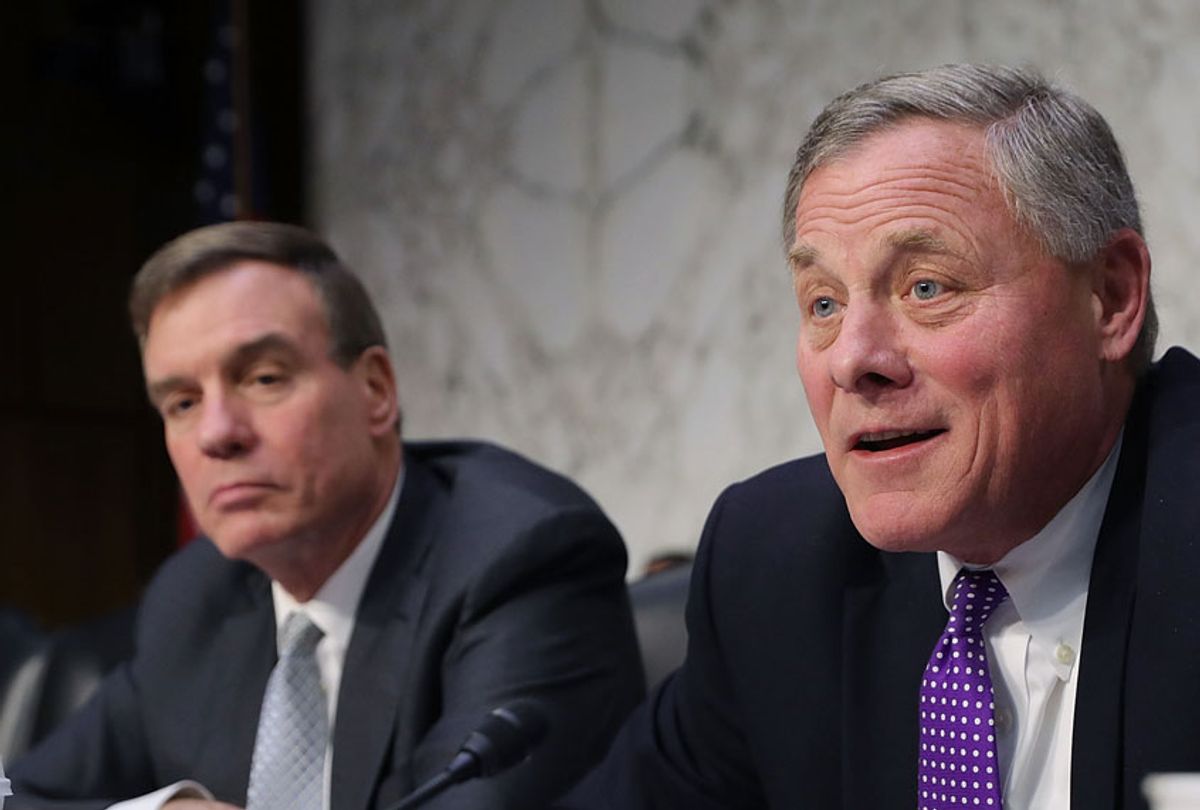 Senate Intelligence Committee ranking member Sen. Mark Warner (D-VA) and Chairman Richard Burr (R-NC) make statements at the close of a hearing with intelligence officials, including the heads of the FBI, CIA and NSA, in the Hart Senate Office Building on Capitol Hill February 13, 2018 in Washington, DC. (Getty/Chip Somodevilla)
--

The Senate Intelligence Committee on Thursday released a sweeping bipartisan report concluding that election systems in all 50 U.S. states were targeted by Russia in 2016 — an effort that was far more widespread and intense than previously acknowledged and one that largely slipped through the cracks by state and federal election officials at the time.

The report was published a day after former special counsel Robert Mueller warned U.S. lawmakers he believes Russia will seek to interfere in the 2020 elections and that "many more countries" are developing similar capabilities.

The report found that "neither the federal government nor the states were adequately prepared" to tackle "extensive activity" by Russia that began in 2014 and carried on at least into 2017.

"In 2016, the U.S. was unprepared at all levels of government for a concerted attack from a determined foreign adversary on our election infrastructure," Sen. Richard Burr, R-N.C., chairman of the Senate Intelligence Committee, said in a statement. "Since then, we have learned much more about the nature of Russia's cyber activities and better understand the real and urgent threat they pose."

The committee described "an unprecedented level of activity against state election infrastructure" in an effort to search for vulnerabilities in the U.S. election infrastructure. Although no evidence was found that any votes were changed or that any voting machines were manipulated,  it concluded that "Russian cyber actors were in a position to delete or change voter data" in Illinois' voter registration database.

The report found that the Russians took advantage of the nation's decentralized voting system and "exploited the seams" between federal and state election systems. It also found that election cybersecurity was "sorely lacking" during the 2016 election cycle and that warnings from the Department of Homeland Security (DHS) and the Federal Bureau of Investigation (FBI) about potential security breaches "did not provide enough information or go to the appropriate people." Twenty-one states said they found out about possible election interference from the press or the Intelligence Committee's hearing on the topic in 2017.

Election databases "were not as secure as they could have been" and aging voting machines with no paper trail were especially vulnerable, the report said.

In one state, which was not named and identified solely as "state 7," some of the passwords to voting machines were as simple as "ABC123, and the testers were able to flip the machines to supervisor mode, disable them and 'do enough damage to call the results into questions.'" Similar machines were used in "State 21" and "State 24."

The report also says that investments, including $380 million in grants to states to bolster cybersecurity and replace vulnerable voting machines, helped secure the election system but noted that lawmakers "should evaluate the results and consider an additional appropriation to address remaining insecure voting machines and systems."

The 67-page report — the first volume of several to be released from the committee's investigation into Russia's 2016 election interference —was based on interviews with state election officials, officials in former President Barack Obama's administration and government and intelligence community officials. It includes multiple pages filled with recommendations on how to bolster the nation's election infrastructure to prevent future interference.

"There's still much more we can and must do to protect our elections," Sen. Mark Warner, D-Va., the top Democrat on the committee, said. "I hope the bipartisan findings and recommendations outlined in this report will underscore to the White House and all of our colleagues, regardless of political party, that this threat remains urgent, and we have a responsibility to defend our democracy against it."

While the U.S. expelled Russians in the past for election meddling, President Donald Trump has repeatedly cast doubt on whether Russia interfered in the election despite Mueller's conclusions and assessments of U.S. intelligence agencies.

Although the report was bipartisan, it was released on a day when Senate Majority Leader Mitch McConnell, R-Ky., moved again to block the consideration of an election security bill in the upper chamber put forward by Democrats.

"It's just a highly partisan bill from the same folks who spent two years hyping up a conspiracy theory about President Trump and Russia and who continue to ignore this administration's progress at correcting the Obama administration's failure on this subject," McConnell said of the Democratic legislation.