In "Skin," a neo-Nazi turns from hate: Good intentions can't redeem this disaster of a film

"Skin," about a racist's journey out of the white power movement, is too misguided to be truly effective 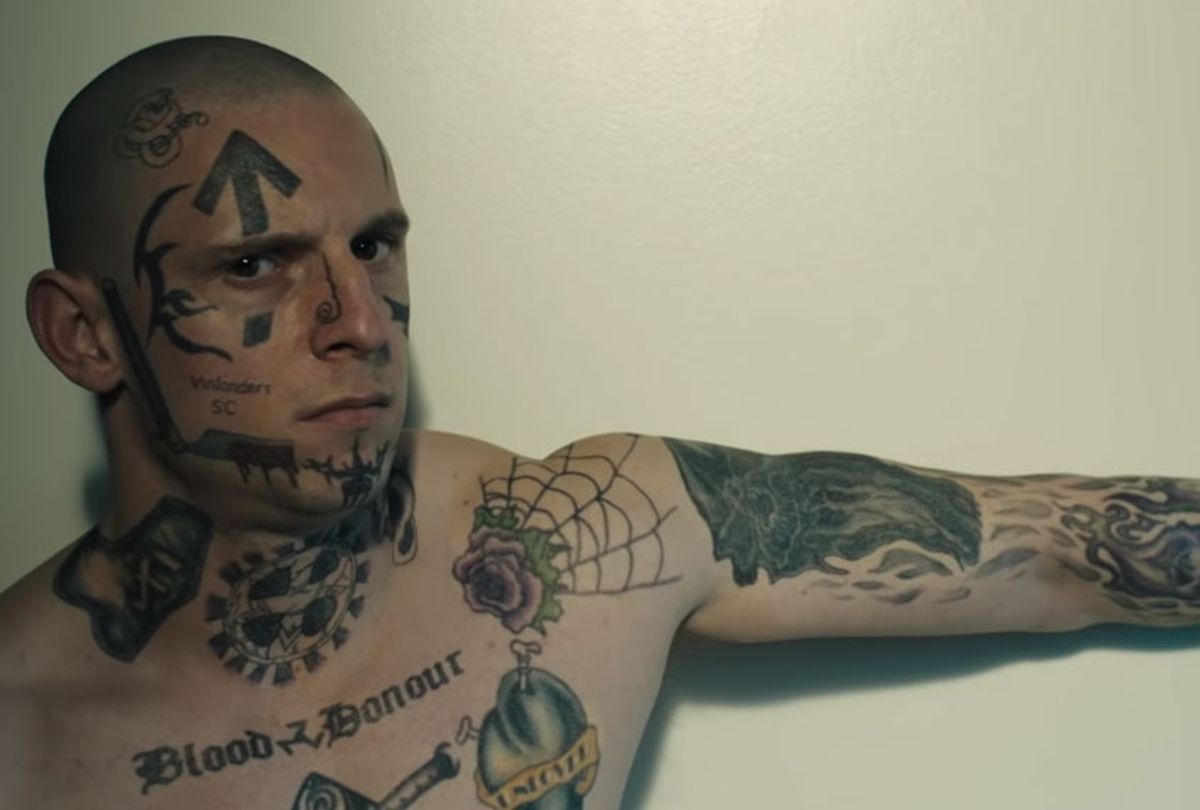 Given the racism erupting all over in America right now, a film like “Skin” — about a man exiting the white power movement — might seem timely. Or prudent. Or perhaps calculated. But who exactly is a film like “Skin” made for? Can this drama actually change any minds? One might hope, but this head-scratching feature, inspired by the true story of Bryon Widner, is too misguided to be truly effective.

Widner (Jamie Bell) is a midwestern skinhead with racist facial and body tattoos. He turned his back on the movement after falling in love with Julie (Danielle Macdonald) and her three daughters. He cooperated with the FBI and the Southern Poverty Law Center, informing on his “social club” and benefitting from an anonymous woman’s largess that allowed him to undergo numerous tattoo removal treatments to start “a new life.” It is an inspiring story about a person changing. An 2011 MSNBC documentary, “Erasing Hate,” previously told Widner’s story.

“Skin,” however, while well-intended, is an unholy mess. The film is poorly written, conceived, and directed by Guy Nattiv, who won an Oscar earlier this year for his exasperating, manipulative short film, also titled “Skin,” about a white supremacist. But the feature and the short have almost nothing in common (aside from a few cast members, Macdonald among them). Both the short and the feature, “Skin,” are jaw-dropping, confounding experiences that aim to make grand statements about race, but do so clumsily and without insight or depth.

The pre-title sequence of Nattiv’s feature opens in Columbus, OH, with a riot. White supremacists chanting “Blood and Soil!” as they approach a group of African Americans, including Daryle Jenkins (Mike Colter), whom we later learn is an activist and founder of the One People's Project, a real hate group-monitoring organization. “F**k off back to your porch, Jenkins!” commands Bryon “Babs” Widner. Bryon soon chases and violently beats a 14-year-old black child, cutting him in a horrific act. This scene, shot in silhouette, dilutes its impact. Nattiv often soft-peddles the more upsetting aspects in this film, which is something a story about hate crimes should not do. The racist characters’ repugnant behavior should be disturbing, not downplayed.

A few scenes later Bryon is arrested and interrogated by Agent Jackie Marks (Mary Stuart Masterson) who has “so precious little patience with meathead racist motherf**kers like [Bryon].” She wants a full detail of the code of his tattoos, as well as names and numbers of his colleagues. If he provides all that, she will move him away. His response is priceless. While handcuffed, the cocky, shirtless Bryon giddily drops his pants, covers his junk, and reveals the tattoos on his inner thighs that read, “Snitches get stitches” in “Mein Kampf” typeface. It seems an extreme act of defiance, even for a meathead racist motherf**ker. (But oh, the irony, considering Widner eventually did give everyone up to the cops!)

Meanwhile, Jenkins is lecturing about taking “human garbage and turning it into a human being.” He continues to talk about “taking one of these fascist assholes [and making them] see the error of their ways.” But the film never shows him doing this — his role is frustratingly relegated to helpful bystander. In contrast, the mother of the teen Bryon assaulted confronts Bryon outside the police station, with physical and verbal threats that get her handcuffed.

Oddly, “Skin” is not really interested in playing black against white here, as the story in the short did. Instead of contrasting the supremacists with the activists, alternating their actions until Bryon and Jenkins meet in the middle, the film goes off in other underdeveloped directions.

First, there is a scene where Bryon and Fred “Hammer” Krager (Bill Camp), the leader of the group, picks up Gavin (Russell Posner) to show the insidious way white supremacists lure alienated youths to join their movement. The scene lacks real seduction. When Gavin later suggests he got in Fred’s truck “to keep American white,” he later concedes he was just hungry. Is this the banality of evil? Hate in exchange for a white-bread sandwich? Gavin disappears for long stretches, returning briefly in two pivotal, predictable scenes that should shock and tug at heartstrings, but do neither.

As for the way the white supremacists indoctrinate youth, a later scene with Bryon’s Ma (Vera Farmiga) enticing Julie’s eldest daughter Desiree (Zoe Colletti) is far more troubling. It too, leads to a later confrontation that is infuriating, but not in the dramatic way Nattiv intends.

One of the ugliest, most confounding episodes in the film has Fred breaking up a dog fight and subsequent fist fight between Bryon and Slayer (Daniel Henshall). He doubles — no, triples — down on his hate speech here. Perhaps Nattiv, who insists on using a hand-held camera and bad editing to immerse viewers in this subculture may think he is making a heavy-hitting drama by showing hate, but too much of “Skin” is ridiculous when it should be unflinching and serious. (An early, outlandish scene has Bryon clubbing a disrespectful white supremacist with the business end of a microphone stand.)

The other storyline depicts Bryon’s relationship with Julie. It really could be a whole other feature for basic cable entitled, “Redeemable White Supremacists and the Women Who Love Them.” The couple meet at a Viking Club Social gathering where her children perform. (It’s curious how or why she got the young-girls-singing-for-skinheads gig, but never mind, there are far more distressing things to ponder about “Skin.”) Bryon drives hours to hang out with Julie, and they talk about their tattoos. He gets all romantic, saying something about cutting her and licking the blood off her. This is foreplay?! Bryon falls in love and he devotes himself to Julie. They fight when Fred calls him at 3:00 a.m. to go burn down a mosque with worshippers inside. Suddenly, however, Bryon has an unexpected change of heart and saves the people he is supposed to kill. “Skin” shifts gears again, as Bryon seeks out Jenkins’ help so he (and Julie) can exit from the white power movement.

From here, the film goes off the rails in ways that will make viewers’ heads spin. Fred and Ma track Bryon and Julie down to confirm he let the Muslims go free. Things go sideways and there’s shooting, and an unintentionally hilarious hospital room scene between Fred and Bryon. There is an attack on Bryon and Julie’s home with crude spray-painted slogans and animal cruelty that bests any depictions of violence toward humans in the film. And then there is a crazy encounter at a hotel pool between Bryon and Desiree that escalates in to some startling physical violence.

Throughout all of these mind-boggling moments, Nattiv keeps intercutting sequences of Bryon undergoing 612 days of an excruciating tattoo removal process. Sitting through “Skin” is painful enough without hearing Bryon’s screaming and seeing closeups of the treatment.

Nattiv really wants to rub the viewer’s nose in all this. But to what end? The film feels completely disingenuous. Jenkins’ One People's Project is important, but the film does not show how Jenkins “turned” Bryon. Nattiv suggests it was the skinhead’s his love for Julie that made him change his mind about being racist. Jenkins only helped him find an exit strategy.

To his credit, Jamie Bell gives a fully committed performance as Bryon despite being sabotaged by Nattiv’s feeble script and direction. Likewise, Danielle Macdonald is best in fierce mama bear mode. In support, Vera Farmiga is coolly sinister in her thankless role.

“Skin” is a superficial and disappointing look at a person, a topic, and an organization that deserve a better, more nuanced portrayal than what Nattiv delivers. This is why “Skin” is so enraging. It can only be hate-watched.