Mueller made one thing clear: Republicans are a national security threat

How did Republicans react to Robert Mueller's testimony? By lying, deflecting and blocking election security bills 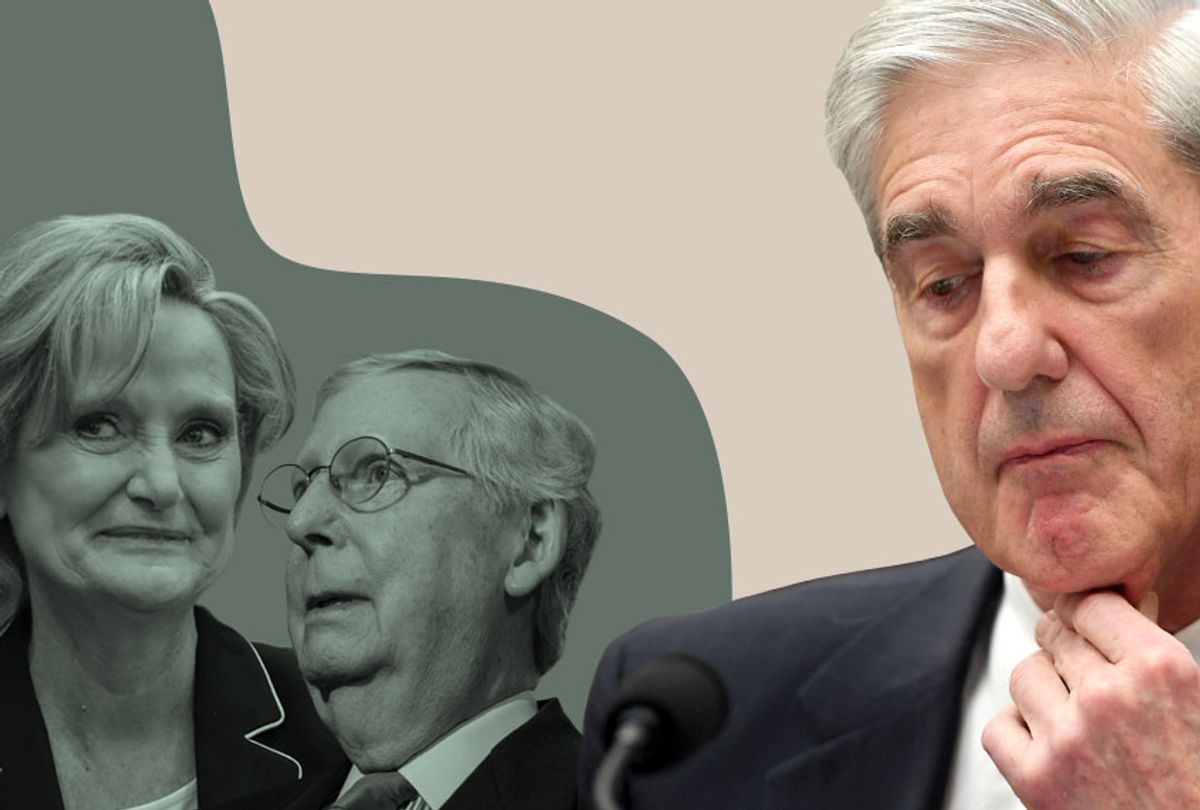 The integrity of American elections was compromised long before Donald Trump’s shocking victory in 2016, but former special counsel Robert Mueller’s testimony before Congress on Wednesday made clear that one political party is actively subverting attempts to protect our democracy.

"Over the course of my career, I've seen a number of challenges to our democracy," Mueller said in his opening remarks. "The Russian government's effort to interfere in our election is among the most serious. As I said on May 29, this deserves the attention of every American."

Muller told the committee that the Russian effort “wasn’t a single attempt. They’re doing it as we sit here, and they expect to do it during the next campaign.”

He later told lawmakers that "much more needs to be done in order to protect against these intrusions — not just by the Russians, but others as well.” Researchers have already reported suspected Iranian disinformation campaigns on most major social media platforms this year.

What Mueller said, coupled with his report — which found that the Russian government interfered in the 2016 election in “sweeping and systematic fashion” — is breathtaking. Russia's disinformation campaign in 2016 spent more than $1 million a month, as Mueller reported in an indictment last year. When given an opportunity to question Mueller, however, some Republicans on the Intelligence Committee actually challenged him on his findings, complaining that he was baselessly defaming the Kremlin.

Even beyond their evident lack of interest in preventing election interference from happening again, Republicans seem to be defending it. This is no surprise when you recall that President Trump said as recently as last month that he'd be fine with accepting damaging information on an opponent from a foreign government.

"I think you might want to listen," Trump said in an interview with ABC News. "There isn't anything wrong with listening." The next presidential election is less than 16 months away.

“The Russians are absolutely intent on trying to interfere with our elections,” FBI Director Christopher Wray told the Senate Judiciary Committee on Tuesday.

The next day, only hours after Mueller testified to the same effect, Sen. Cindy Hyde-Smith of Mississippi, a Republican, blocked two election-security bills and a measure regarding cybersecurity for Senate staff.

Democrats had hoped to pass a pair of bills requiring campaigns to alert the FBI and the Federal Election Commission if they received offers of assistance from abroad. Another bill would allow the sergeant-at-arms to offer voluntary assistance to help secure the personal devices and accounts of senators and their staff.

Hyde-Smith blocked all the bills without offering any explanation for her action or stating whether she made the motion by herself or on behalf of her party. Her move is generally in keeping with Republican arguments that Congress has already responded to election security issues, which primarily fall on state officials. Under Senate rules, any one senator can ask for consent to pass a bill but any individual senator is able to object.

That tweet is empty theater, as her actions prove. She talks of "moving on," as if the alarm bells Mueller has raised were solved merely by being rung, and mentions "Russian meddling" to cast an apolitical scrim over a nakedly partisan effort.

Senate Intelligence Committee ranking member Mark Warner, D-Va., condemned Hyde-Smith’s motion: “Mueller’s testimony should serve as a warning to every member of this body about what could happen in 2020, literally in our next elections.” But the committee's chairman, Sen. Richard Burr, R-N.C., defended Hyde-Smith on Wednesday, saying he did not think Congress needed to take further action to mitigate the threat of foreign interference.

When Republicans controlled the House last summer, they eliminated new funding for states to strengthen election security. After years of unsuccessfully trying to defund the federal Election Assistance Commission (EAC), Republicans defeated a bill to extend funding for a state grant program meant to ensure that the voting process is secure.

The EAC is the sole federal agency that exclusively works to secure the integrity of the democratic process. It has worked with the FBI to examine an attack on the agency’s computer systems by a Russian-speaking hacker after Trump’s election.

Late last month, the Democratic House majority passed an election security measure that authorized an additional $600 million to states as well as $175 million every other year to bolster election infrastructure. The bill would also require voting systems to use paper ballots as a backup to electronic systems, and would require that all 50 states conduct audits after elections. A recent analysis by the Associated Press found that many of the 10,000 election jurisdictions nationwide use old or outmoded operating systems to create their ballots, program voting machines, tally votes and report counts.

All but one Republican in the House opposed the bill. The day after Mueller’s testimony, Senate Majority Leader Mitch McConnell blocked the bill in the Senate.

“Clearly something so partisan that it only received one single solitary Republican vote in the House is not going to travel through the Senate by unanimous consent," McConnell said on Thursday.

McConnell is suggesting that Democrats are seeking a political advantage by trying to stop foreign election interference. He also blocked the Duty To Report Act, which would require candidates, campaign officials and their family members to notify the FBI of any offers of assistance from foreign governments.

By blocking these bill McConnell’s giving the Republicans, who face a generic seven-point disadvantage in polls of voter preference, a political benefit. Recall that when Barack Obama raised concerns about possible foreign meddling in 2016, McConnell threatened that if the then-president went public, the Senate leader would claim that Democrats were merely playing politics.

At least a dozen Republican congressional campaigns used materials stolen from Democrats by Russian hackers during the 2016 election. Several other Republican campaigns received millions in contributions from an oligarch with close ties to Russian President Vladimir Putin. In 2018, the Democratic Congressional Campaign Committee called on the National Republican Congressional Committee to make a bipartisan pledge not to use stolen or hacked information in House campaigns. After months of negotiations, last September Republicans backed out, refusing to sign the pledge.

In the last few months, we have seen Republican voter fraud in North Carolina so severe that it invalidated a House election, a GOP staffer arrested for election fraud in Virginia, a Republican Texas mayor arrested for rigging an election, and Texas’ Republican secretary of state forced to resign after his botched attempt to purge voter rolls.

The Senate’s rejection of election protection efforts this week suggests that the GOP’s frequent complaints about "voter fraud" were a farce. As Salon’s Heather Digby Parton has written, “when the history of this bizarre era is written, it may very well be said that McConnell was the man behind the curtain who made it all happen.” If and when the Democrats win control of the Senate again, this issue will suddenly leap back to prominence, under the amorphous and amoral set of Republican rules.