Mueller untangles the Russia web: Trump's not the only Republican to welcome election meddling 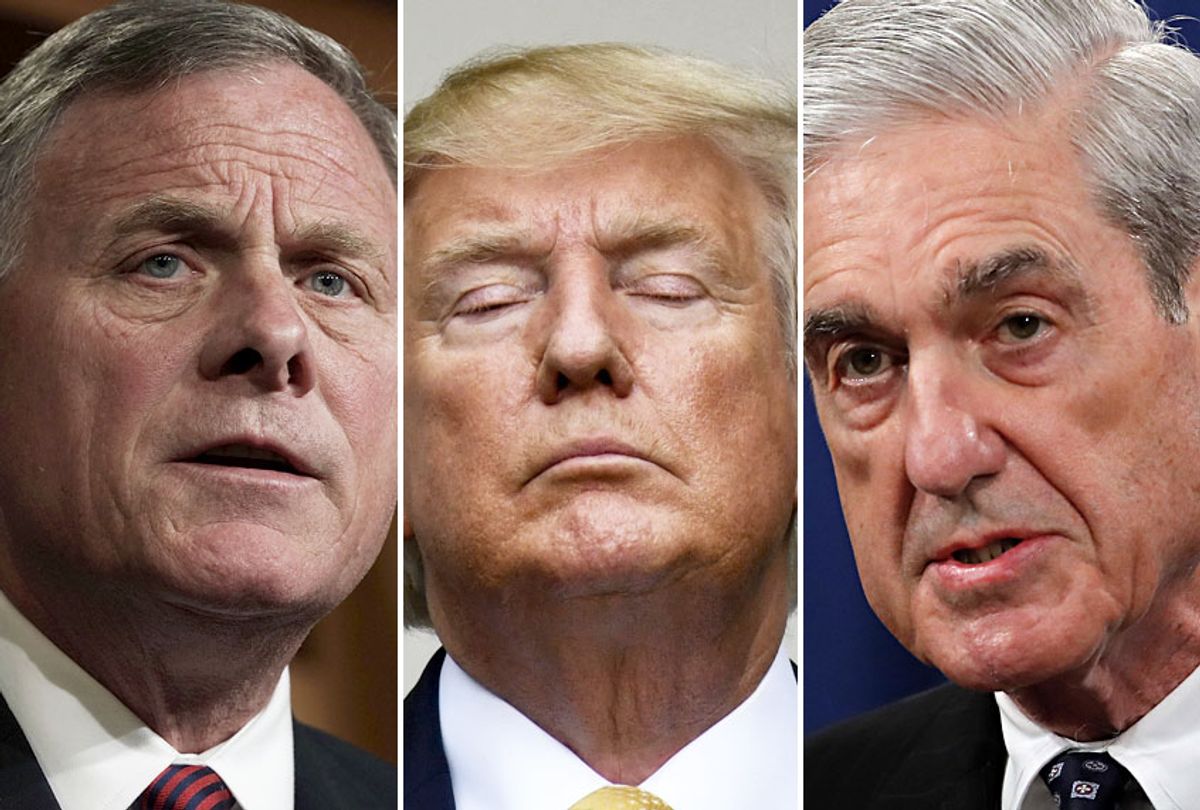 Now that a couple of days have passed and we've all had a chance to digest the testimony of special counsel Robert Mueller and shake off the media's predictable theatre criticism and sports analysis, it's easy to see that the man's focus in the investigation was on the Russian sabotage of America's electoral system rather than Trump abusing his power to cover it up. And after the Senate Select Intelligence Committee released its report on the same subject on Thursday, it's easy to see why.

Mueller obviously didn't want to get into the obstruction case with the committee and for understandable reasons. He was hamstrung from the beginning with that ruling by the Office of Legal Counsel that holds that a sitting president cannot be indicted and the infuriating precedent James Comey set when he foolishly went outside established Department of Justice guidelines to discuss his decision not to prosecute Hillary Clinton in the infamous email case. Mueller and his team know very well that the president obstructed justice but since they couldn't indict him they undoubtedly felt that boldly asserting Trump had committed crimes would be seen in the same light.

The Judiciary Committee did what they could but those charges, being in that prosecutorial legal and ethical gray area, made that hearing only marginally fruitful. And, in any case, it was clear that Mueller was far more concerned with the issues raised in the second hearing before the House Intelligence Committee. And that's because the national security implications are extremely serious.

Mueller reiterated the findings of all the intelligence agencies that have said the Russians interfered in the 2016 election on Donald Trump's behalf. And he alluded to the classified counterintelligence investigation that was outside his narrow criminal purview during a line of questioning with Raja Krishnamoorthi, D-Il:

KRISHNAMOORTHI: Individuals can be subject to blackmail if they lie about their interactions with foreign countries, correct?

Krishnamoorthi said, "Flynn’s false statements could pose a national security risk because the Russians knew the falsity of those statements" and Mueller replied that there are many elements of the FBI that are looking at different aspects of that issue.”

Trump had to fire Flynn for possibly being compromised under these exact circumstances — only Trump's lies were much more consequential. And, as we know, Trump's behavior toward the Russian president is downright sycophantic.

SCHIFF: The need to act in an ethical manner is not just a moral one, but when people act unethically it also exposes them to compromise, particularly in dealing with foreign powers, is that true?

SCHIFF: Because when someone acts unethically in connection with a foreign partner, that foreign partner can expose their wrongdoing and extort them.

SCHIFF: And that conduct — that unethical conduct can be of a financial nature if you have a financial motive or elicit business dealing, am I right?

SCHIFF: It could also just involve deception. If you are lying about something that can be exposed, then you can be blackmailed.

Mueller's mandate didn't include this line of inquiry which is apparently still being investigated by the FBI counterintelligence division. (Or, at least it was. Trump's henchman Bill Barr may have closed it down by now.) But it didn't take any kind of super-spy to see that Trump's behavior toward Vladimir Putin, particularly at that shameful summit in Helsinki, is abnormal, even for him.

Nobody asked Mueller about Helsinki.  But one imagines that with all he knew, that had to have been an especially unnerving spectacle.

Immediately after the hearing Republicans blocked two bipartisan election security bills that would require campaigns to alert the FBI and Federal Election Commission about foreign offers of assistance. On Thursday, Senate Majority leader Mitch McConnell blocked two more, one to require a paper ballot back-up and the other to fund the Election Assistance Commission saying that Democrats wanted to give themselves a "political benefit" which is actually true. They would like the benefit of free and fair elections.

At this point, it is impossible to ignore the fact that Donald Trump isn't the only politician willing to accept foreign interference in our elections. The entire Republican Party now welcomes it as well.

The Senate Select Committee on Intelligence released the first volume of its report on the 2016 election interference Thursday and it contained a fairly shocking revelation. The election systems in all 50 states were targeted, a far bigger attack than we knew and apparently something that went almost completely undetected at the time. The report says that they did nothing with the information they gleaned but darkly suggest that its possible they may have been collecting information for a future date. This is, apparently, fine with President Trump and the Republican leadership.

Former solicitor general Walter Dellinger appeared on All In with Chris Hayes on Thursday night and made the important point that not all crimes are impeachable offenses, "nor does it need to be a technical violation of federal criminal code." But he noted that a president who consciously fails to defend the US against a foreign military intelligence attack for his political benefit is surely impeachable. But the Democratic leadership is convinced that the best course for dealing with Trump's high crimes and misdemeanors is not to impeach but to beat him fair and square at the ballot box.

Considering all we have learned from both the Mueller Report and the SSCI about Russian election interference and sabotage, as well as the continued unwillingness of the president and Republicans to do anything about it, that seems willfully naive.