Lessons from the Puerto Rican insurrection: "When tyranny is the law, revolution is the order."

What happens when you turn up the heat under a cauldron of racism, economic deprivation & political corruption? 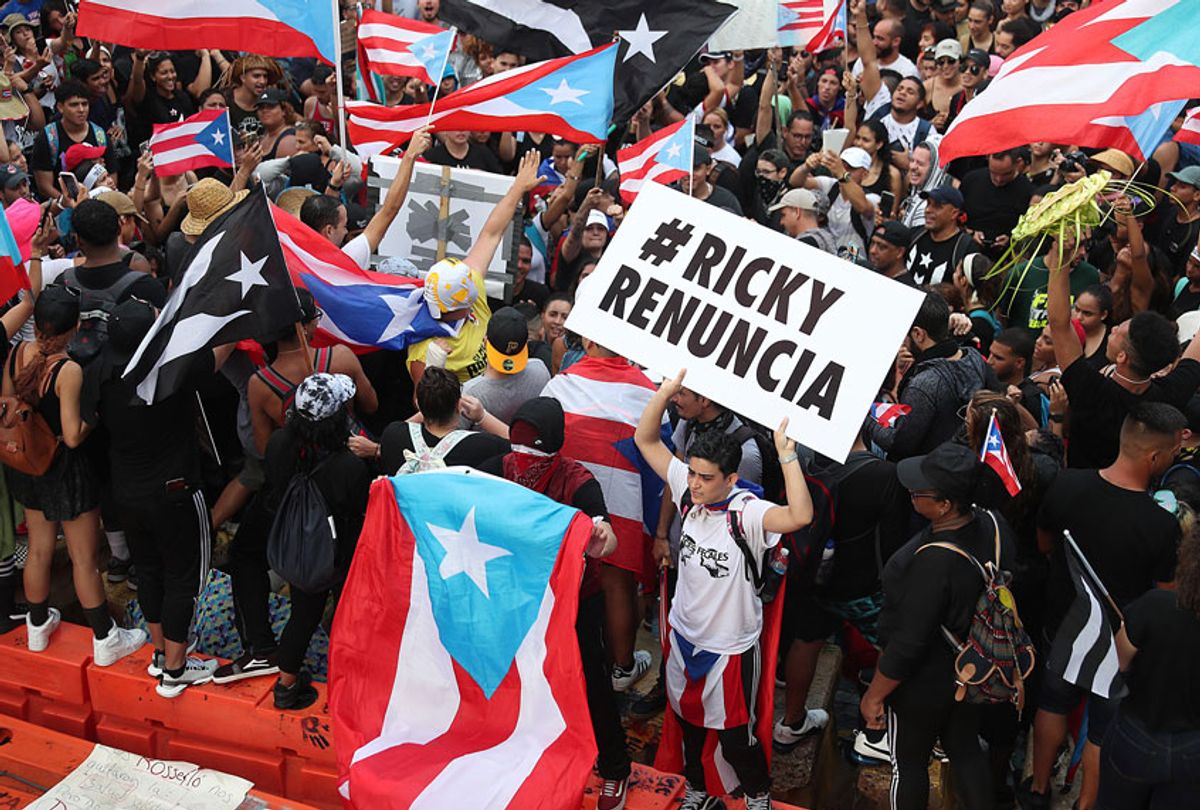 Protesters demonstrate against Ricardo Rossello, the Governor of Puerto Rico, near police that are manning a barricade set up along a street leading to the governor's mansion on July 22, 2019 in Old San Juan, Puerto Rico. (Getty/Joe Raedle)
--

"When tyranny is the law, revolution is the order."

It couldn’t be a more radical contrast.

On the island of Puerto Rico hundreds of thousands of activists took to the streets to depose Governor Ricardo Rossello, while here on the mainland we have Speaker Pelosi hoping that gravity can do the heavy lifting of holding Donald Trump accountable for his high crimes and misdemeanors.

Puerto Ricans have been simmering in the economic crucible of poverty, racism, and endemic political corruption for generations.

How do you really feel?

According to the BBC it finally boiled over after 880 pages of group text messages between Rossello and several of his male colleagues were leaked. Some of the male banter including joking about using the corpses of the dead from Hurricane Maria “to feed our crows” referencing the administration’s political opponents.

In his comfort zone with his pals, the Governor said that he wanted to see someone beat up the former New York City Council Speaker who he called “that whore.” Another member of the Rossello junta said he was “salivating to shoot” San Juan’s Mayor Carmen Yulin Cruz.

As the island’s top educator, Keleher was getting paid $250,000 which, as Forbes pointed out was “ten times more than the average Puerto Rican teacher, three times more than Puerto Rico governor Ricardo Roselló, and 25 percent more than Secretary [of Education] DeVos.”

Your local schools as a resort?

After Hurricane Maria, Keleher, a charter school partisan, closed 263 public schools, one-fifth of the island’s inventory, firing 5,000 teachers in the process. In at least one case, the government sold off a local elementary school treasured by the community because it was a symbol of surviving Maria.

But these kinds of abuses of power are compounded by the structural elements traced back to the island’s colonial status. Despite generations of dedicated U.S. military service, as well as making major intellectual and cultural contributions to our nation, they are denied the liberty and autonomy required to improve their own circumstances by a 19th-century arrangement.

The United States got the Caribbean island as part of the spoils from the Spanish American War in 1898 when it used the pretext of Spain’s oppression of Cuba and the mysterious sinking of the U.S.S. Maine, to prosecute a war that won it dominion over Puerto Rico, Guam and the Philippines.

Before this latest mass uprising, the biggest crowds in the street had surfaced in 2004 when Puerto Ricans came out in force to demand that the Pentagon stop bombing Vieques.

Skin in the game?

No doubt, mainland folks who don’t have any family ties to the island, figure whatever is going on in Puerto Rico is as remote in relevance to their day to day lives as the two million activists who turned out on the streets of Hong Kong to stave off Chinese repression.

That’s the kind of insularity that the mother of a young man who died in the 9/11 World Trade Center attack told me she felt when in May of 2001 she saw news coverage of the Taliban’s blowing up of the world’s largest Buddhas just a few months earlier. “I think back now, ‘whoa, did you have any idea that could affect your life?’” she said.

History doesn’t wait until we are ready, and I don’t think there is some invisible hand ready to rescue us from our collective inattention to the big picture.

If you want to survive in a world that has NO guarantees when a street protest gets big enough to see from space its best to pay attention no matter what language the crowd speaks.

The forces of scarcity, racism, repression and despotic political corruption are reaching a critical flashpoint on our planet that’s getting warmer and less hospitable by the day. And there’s a synergy to this.

In reality, what played out in Puerto Rico is something that can be traced back to the same soulless forces that profit off financial calamity and scarcity where ever it crops up. In fact, they usually take first-class flights into a place just before the financial meltdown and manage to escape in the dust of the collapse leaving no fingerprints.

Just read up on the Greece debt crisis.

It’s really all about the predations of Wall Street’s vulture capitalists who had already ransacked the island years before Maria, thanks to billions of dollars in corrupt bond deals that left Puerto Ricans with a mountain of insurmountable debt and just their usually wonderful weather.

Do we have a payment plan?!
When that failed with Maria’s landfall the island was cast into medieval darkness and the shit really hit the fan in the days, weeks and months that followed as more than 3,000 people died when the infrastructure failed. It had long neglected by local corrupt officials and ignored by Congress.

As documented thoroughly by National Public Radio and PBS’s Frontline, the crisis has its beginnings in the 1996 decision by Congress to phase out a huge tax break to pharmaceutical and manufacturing companies to locate on the island that over the years had helped build up the island’s middle class.

With the loss of the billions in what amounted to subsidies, the multinationals did the same disappearing act, shuttering their factories and leaving the toxic waste behind, just as they had done a generation earlier in the American Rust Belt

As the good-paying jobs disappeared and the economy shriveled, the island’s political leadership opted to not cut government spending or raise additional tax revenue but to borrow its way out of the squeeze play.

Enter the new age pirates of the Caribbean, the same crew that figured how to build a pyramid scheme that enriched themselves and crushed millions of American homeowners in the Great Recession.

The bankers helped float billions in Puerto Rican government bonds that had the added benefit of paying slightly higher interest rates and generating income that would be tax-free.

Just as they did with their toxic mortgage-backed securities, they marketed these products that they sliced and diced for pension funds and retirement accounts making money hand over fist with every transaction.

Public debt grew exponentially from 2000 on. By 2011, the smart money on Wall Street knew that Puerto Rico’s public finance was a Ponzi scheme with a flag.

“Many of the bonds were specifically designed to be sold to Puerto Ricans, packaged into special funds that were less transparent than anything regulators would allow on the mainland,” reported NPR. “Regulations against things such as banks recommending their own bond deals to investors didn't apply on the island.”

Ahead of the curve

But in 2014 the Wall Street wise guys had one more deal to go that could insulate them from the ruination their speculation had wrought.

Even as the Commonwealth’s economy was in tatters with massive youth unemployment and a 58 percent of its children living in poverty the obliging Puerto Rican government would float a $3.5 billion dollar bond issue of which almost a billion went to Barclays, Banco Santander, JPMorgan, and Morgan Stanley.

By May of 2017, the Commonwealth declared bankruptcy with $74 billion in bond debt and almost $50 billion in unfunded pension obligations.

But before we develop some condescending attitude about how Puerto Ricans lost control of their own destiny to debt and the corrupt predations of their elected leaders, we should reflect on our own sorry circumstance.

We have an authoritarian despot in the White House, and he’s got the national credit card and Congress is his “minder.”

Congressional leaders and the Trump White House struck a budget deal to spend $2.7 trillion over the next two years including a $738 billion appropriation on the military that will make us less secure and does not address the real threat to our collective existence, global warming.

According to the Pew Research Center the nation's $22 trillion government, debt exceeds the nation’s gross domestic product and servicing it will cost taxpayers $593.1 billion in Fiscal Year 2019 that ends Sept. 30.

Talk about a pyramid scheme.