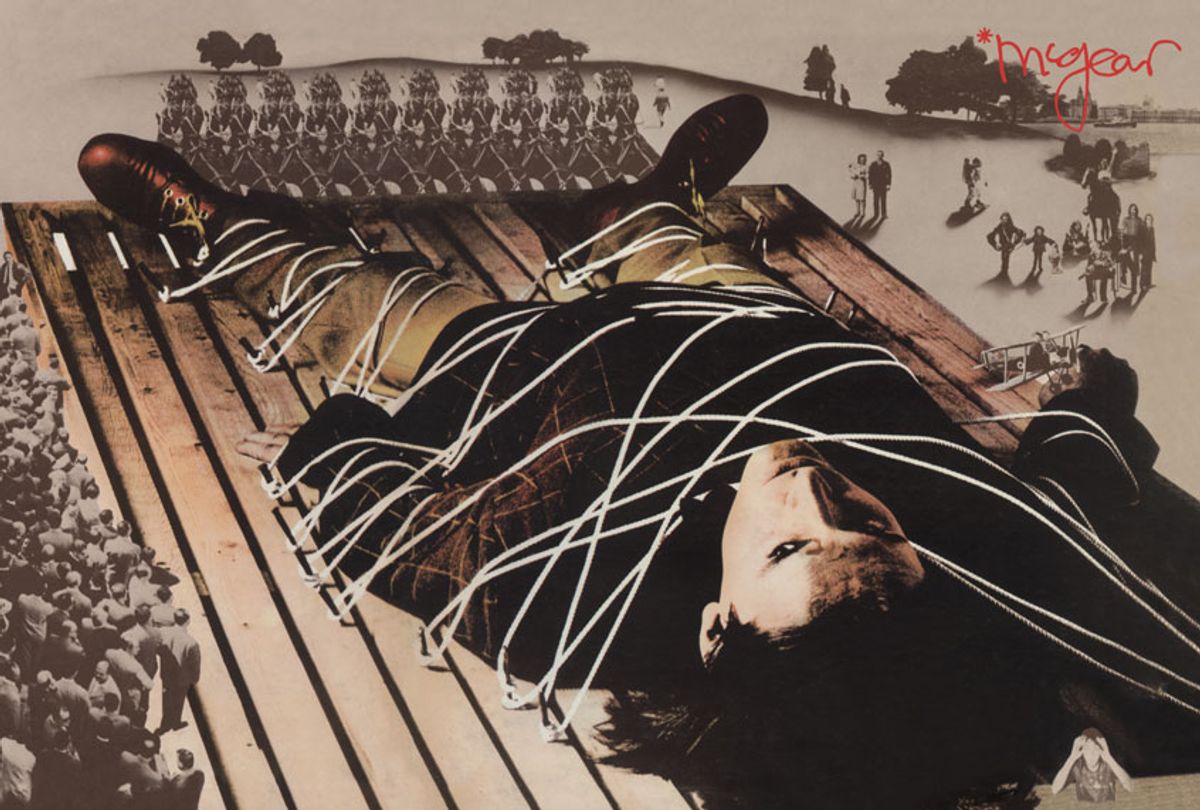 As the younger brother of pop virtuoso Paul McCartney, Mike McCartney enjoyed a bird’s-eye view of his Beatle sibling’s formative years. Later, as the Fab Four conquered the global music charts in the early 1960s, Mike left his job at a salon and took his own stab at greatness via the Scaffold, a group of the younger McCartney’s Liverpool mates bent on taking a humorous approach to the Mersey Sound. For Mike, it was the beginning of an unusual journey on the road to musical stardom.

Indeed, the Scaffold made for one of British pop’s most whimsical acts, a tradition that Mike (working under the stage name of Mike McGear) continued in fine style with an eponymous solo album, originally released in September 1974 and recently remastered in a deluxe triple-disc version. McCartney had originally considered “Mike Blank” as his nom de plume in order to avoid any suggestion that he was trading on his famous brother’s surname, but he adopted the root word “gear” instead so as to draw upon its Scouser connotations of being “fab” or “cool.”

As the culmination of Mike McCartney’s manifold musical and comedic talents, "McGear" offers a memorable work of 1970s rock in its marvelous, unvarnished heyday. With contributions from his vaunted brother Paul, wife Linda, and various members of Wings, the LP’s remastered version brings "McGear" vividly back to life for new generations of listeners. While the music is invariably top-rate—as produced by Paul McCartney with an array of top players on board—"McGear" sparkles with the younger McCartney’s brilliant sense of wordplay and musical eccentricity. While "McGear" may have sounded right at home among the pop sensibilities of the mid-1970s, the album seems positively refreshing and lighthearted—innocent, even—within the context of today’s vexed sociocultural moment.

Mike McCartney’s verbal hijinks and musical sophistication with the "McGear" LP owes much to his upbringing in a single-parent household helmed by his father Jim McCartney in the wake of mother Mary’s untimely death in October 1956. In the 1920s, Mike’s father led the Jim Mac Dance Band, who made a name for themselves on Liverpool’s party and dancehall circuit. In his own way, Jim’s interest in period music later exerted a sizable influence on the Beatles’ multifaceted musical directions, not to mention Mike’s own penchant for musical variety.

But as Mike was quick to point out during my recent conversation with him, Jim Mac’s influence didn’t end with his musical background. “My dad used to do the crossword,” McCartney recalled, “and he had a great love of words and puns, which is very Liverpool. My family and people in Liverpool were into surrealism before the surrealists,” he joked. “While we may have been Liverpool working-class people, we had a natural love of wordplay, along with our Liverpudlian sense of humor, and my dad would stimulate it at home with the crosswords, which he shared with me and ‘our kid’,” Mike’s warmhearted euphemism for his world-famous brother.

McCartney’s yen for puns and rhetorical games manifested themselves in a series of hits with the Scaffold, who formed in 1964 and consisted of Mike (as McGear), John Gorman, and Roger McGough. In 1966, they received their first big break, courtesy of Beatles manager Brian Epstein and producer George Martin, who was attracted to the group’s comedic stylings, especially their unusual experiments with weaving comedy and poetry—a bizarre admixture of genre-bending that was well ahead of its time.

The Scaffold, who drew their name from the UK title of a Louis Malle film, seemed to be on the verge of breaking out. “We were satirists,” Mike recalled. “Our main thing was to comment on life. A ladies’ barber, a Post Office engineer, and an English teacher, jobs for life.” But they were also satirists in need of spectators with whom they could share their peculiar brand of humor. “We realized that when comedy got to a wider audience, it would be good to include music,” said McCartney. “We couldn’t do rock ‘n’ roll because we couldn’t sing or play instruments.”

At Martin’s encouragement, the Scaffold signed with Parlophone, the producer’s erstwhile label. As McCartney recalled, “George Martin was the Scaffold’s producer, not because of my brother and his chums, but because of his work with Peter Sellers and Spike Milligan. George had recorded 'Songs for Swingin’ Sellers,' and Paul and I had fallen about laughing to those nice little sketches.”

With Martin on their team, the Scaffold naturally gravitated towards lobbying for Epstein to be their manager, given the long string of successes that George and Brian had enjoyed together. “Now that we were involved with George Martin and EMI,” Mike recalled, “we went to Brian Epstein and said, ‘You’ve got all the pop groups, but can you do a theatre comedy group?’ He goes, ‘My dear boy!’—‘cause he was a failed actor—‘Of course. We’d love to have you aboard.’ So we thought, with his enormous NEMS agency, we had nothing to lose.”

By the time that they had started working in the studio with Martin, the Scaffold had a number of “nice little sketches” ready for their new producer’s consideration. Chief among them were “2 Days Monday,” for which Martin was quite partial, and “3 Blind Jellyfish.” As McCartney remembered, the producer had a penchant for comedy recordings that dated well into the 1950s, and they were eager to try their hands at going national. Martin’s score for “2 Days Monday,” which he had selected as the A-side of their first single, began with the Scaffold’s singers rotating their vocal parts against, of all things, a solo tuba.

While “2 Days Monday” failed to chart, Martin and the novelty troupe regrouped to record “Thank U Very Much,” which proved to be their breakthrough number. Released in November 1967, “Thank U Very Much” b/w “Ide Be the First” had been Mike’s brainchild. As he recalled, “There was this other song I’d written where we’d thank the audience for coming along: ‘Thank you very much for keepin’ the seats warm,’ and so on, just to close our show. So we recorded ‘Thank U Very Much,’ a good strong track. We had a hit there—it was [Prime Minister] Harold Wilson’s favorite record, and it got us on the telly in a major way [with] 'Top of the Pops'!”

While the Scaffold never reached such heights again, Mike succeeded admirably in cementing his vision for pop whimsy with "McGear." With songs like the hilarious “Givin’ Grease a Ride” and “The Man Who Found God on the Moon,” McCartney shrewdly marries the pop sensibilities of his namesake with the wordplay of the Scaffold during their heyday. In “Norton,” McCartney’s rhetorical gifts and punning Englishness are on full display, with Mike singing blithely about Norton, “a daddy’s boy” who “joined the army. / He thought they’d make a man of him—he must be bloody barmy!”

While "McGear" may sound quaint, at times, to our twenty-first-century ears, the sterling sound of the remastered LP will send listeners on a nostalgic journey back to rock’s 1970s dream factory. With his masterful lyrics at their level best, Mike McCartney reminds us of pop’s ineffable power to transport our senses to another time, another place.