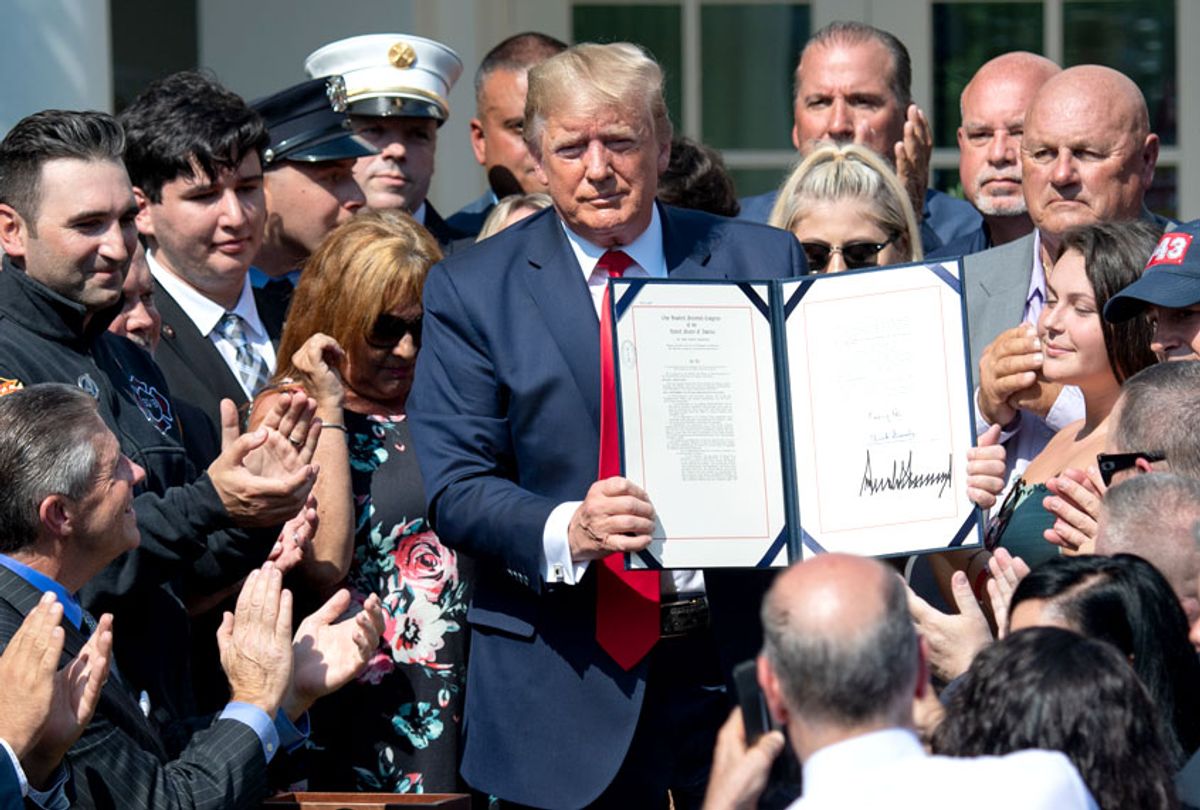 People applaud as US President Donald Trump, surrounded by September 11 first responders and family members, signs HR 1327, an act to permanently authorize the September 11th victim compensation fund, during a ceremony in the Rose Garden of the White House in Washington, DC, July 29, 2019. (Getty/Saul Loeb)
--

President Donald Trump on Monday signed a bill ensuring that a fund to secure the 9/11 Victim Compensation Fund is permanently replenished — but he did not invite the bills lead author and sponsor, Democratic Rep. Carolyn Maloney of New York, to the signing ceremony.

"Today, we come together as one nation to support our September 11 heroes, to care for their families and to renew our eternal vow: Never, ever forget," Trump said before signing the legislation into law at the White House Rose Garden.

Speaking to the the numerous 9/11 first responders in attendance for the signing, Trump said, "Over the last two decades, you have endured hardship with amazing grace and incredible grit."

"You lift up our communities, and you remind us what it means to all stand united — one nation under God," he said. "Today, we strive to fulfill our sacred duty to you."

"The whole world witnessed the might and resilience of our men and women in the New York Fire Department and New York Police Department," he said. "They answered terror with the emotional strength of true American warriors."

"The love and loyalty of our 9/11 responders knows no bounds," he added. "We pledge to stand by the families of those affected today, and every day we will stand with you."

Trump also made a series of unsubstantiated claims about his personal involvement with the victims and the recovery effort.

There is scant evidence of Trump's involvement. In fact, hours after the Twin Towers collapsed, Trump bragged to a New Jersey TV network that his own Financial District property was not the tallest in the neighborhood.

The president later came under mounting scrutiny after he commemorated the anniversary of the attacks in 2013 by extending his "best wishes to all, even the haters and the losers, on this special day." And, as president, the first thing Trump did on the 17th anniversary of 9/11 was send a tweet attacking members of the Department of Justice and the FBI, suggesting they had colluded with "foreign spies & Russians."

Indeed, Trump has a long history of making controversial statements about the deadliest terrorist attack on American soil. He also boasted that he delivered CBS its best ratings "since the World Trade Center came down"; argued that he "predicted" the 9/11 attacks; and inexplicably claimed that he could see people leaping to their deaths from the towers from his Midtown apartment more than four miles away. During the 2016 campaign, he infamously claimed that he witnessed thousands of Muslims in New Jersey celebrate after the 9/11 attacks.

Trump on Monday reauthorized money for the 9/11 Victim Compensation Fund through 2092, essentially making it permanent. Prior to the signing, the $7.4 billion fund was rapidly being depleted, and administrators recently cut benefit payments by as much as 70 percent.

The signing followed weeks of intense lobbying from ailing 9/11 first responders, including one who died shortly after testifying before Congress last month.

Congress passed the James Zadroga 9/11 Health and Compensation Act in 2010 in the face of opposition from some Republicans over its $7.4 billion price tag. The fund was most recently reauthorized in 2015 for 90 years, but a portion of the law — the Victim Compensation Fund — was only funded for five years, through the end of 2020. The fund's leadership said in February that it would reduce compensation decisions due to "funding insufficiency."

The fund was created to provide health care and financial assistance to first responders, volunteers and survivors who are now experiencing subsequent health problems, including cancer and respiratory disease, following the 2001 attacks.

In attendance at the White House for the signing were Vice President Mike Pence; Rudy Giuliani, the president's lawyer who was the mayor of New York during the attack; and Deputy Attorney General Jeffrey Rosen.

No Democrats were in attendance, including Maloney, whose office said the congresswoman was not invited to the Rose Garden ceremony. It is not clear if any Democrats received invitations.

Comedian Jon Stewart, one of the most vocal advocates for 9/11 responders, did not attend the signing.

During an emotional appearance before Congress last month, Stewart lashed out at lawmakers for what he called their "callous indifference" and "rank hypocrisy," accusing them of campaigning on the challenges faced by first responders and applauding their heroism but refusing to take legislative action to support them. Stewart, alongside ailing first responders, has traveled to the nation's capital on several occasions to use his bully pulpit to convince lawmakers to fund the the legislation.

The former late-night host begged lawmakers to take the issue seriously alongside an ailing Luis Alvarez, a retired New York Police Department bomb squad detective who worked to clean up Ground Zero after the fall of the Twin Towers. Just weeks after the hearing, Alvarez died from cancer that had been linked to the time he spent searching the site's toxic rubble for survivors and for remains of fellow first responders.

"I should not be here with you, but you made me come," Alvarez told the lawmakers last month. "You made me come because I will not stand by and watch as my friends with cancer from 9/11 like me are valued less than anyone else because of when they get sick, they die."

"It is my goal and my legacy to see what you do the right thing for all 9/11 responders," he continued. "You said that you would never forget. Well, I'm here to make sure that you don't."

Trump on Monday praised Alvarez for his efforts in advocating for the bill.

"We really want to thank him, he was really something," Trump said.

Advocates of the bill, including Sen. Kirsten Gillibrand, D-N.Y., applauded Trump for signing it.

"I am grateful to every single person who helped pass this bill and to President Trump for signing it quickly into law," Gillibrand, who is seeking the Democratic presidential nomination in 2020, said in a statement.