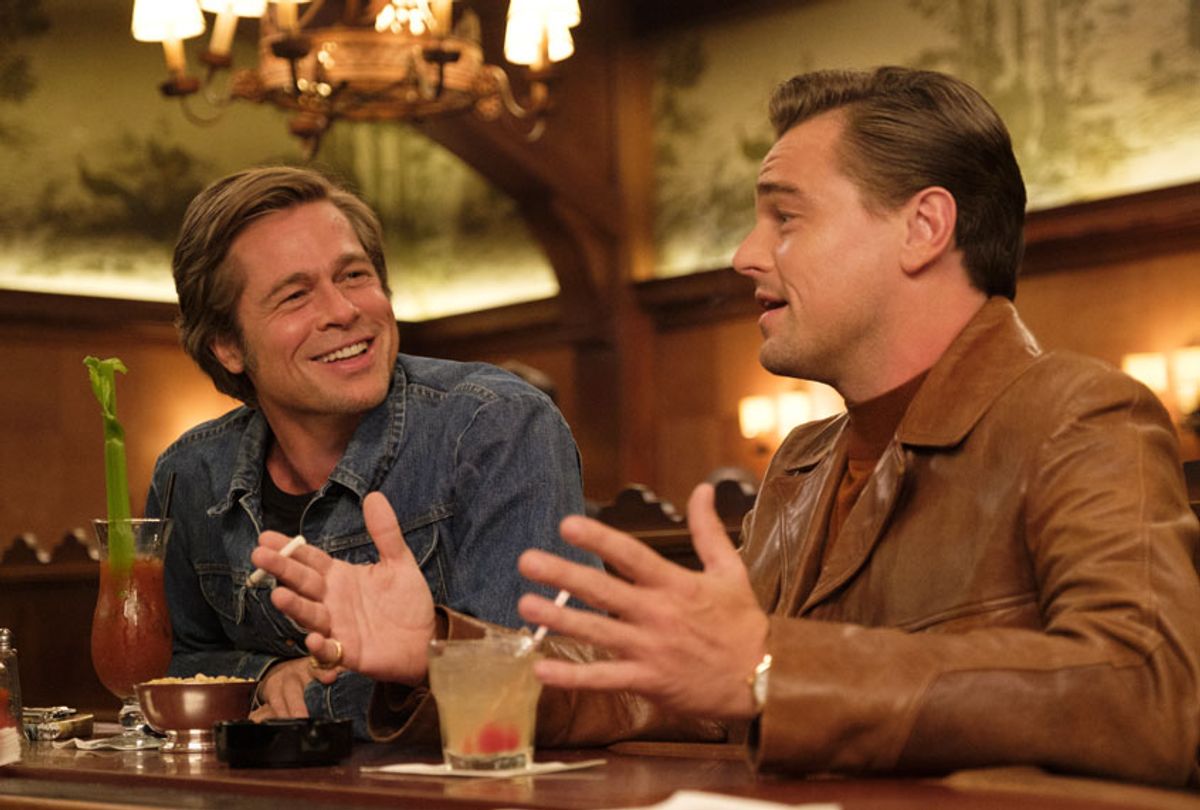 "Once Upon a Time in Hollywood" (Sony Pictures)
--

Spoilers ahead for "Once Upon a Time In Hollywood" You have been warned!

It's official: In addition to being a filmmaker, Quentin Tarantino wants to be a historian . . . with decidedly mixed results. More specifically, Tarantino wants to be the guy who rewrites history, either erasing past atrocities or allowing the victims to achieve the exploitation movie equivalent of justice. In the 2009 film "Inglourious Basterds," he did this by having Jews terrorize Nazis and ultimately assassinate Adolf Hitler himself, thereby bringing an end to World War II and avenging the Holocaust.

In the 2012 movie "Django Unchained"Tarantino had a former slave destroy a plantation, murdering its owner and employees before blowing up the estate itself. (While this technically doesn't alter any set historical events, if something like this had happened in the real antebellum South, it would have at least been on par with the uprisings led by Nat Turner and John Brown.)

Now we have "Once Upon a Time in Hollywood," which ends with a classic Tarantino bloodbath. Instead of Charles Manson cult members Susan Atkins (Mikey Madison), Linda Kasabian (Maya Hawke), Tex Watson (Austin Butler), and Patricia Krenwinkel (Madisen Beaty) breaking into Sharon Tate's house and murdering the young actress along with her friends Jay Sebring, Abigail Folger and Voytek Frykowski (as well as bystander Steven Parent), they wind up getting derailed by the plotlines of main characters Rick Dalton (Leonardo DiCaprio) and Cliff Booth (Brad Pitt). After many unexpected twists and turns, they wind up being murdered themselves instead of committing the murders. The movie ends on a high note as Booth goes to the hospital for his wounds and Dalton joins Sebring and Tate for drinks.

There are three major problems with this.

The first is that, while the alternate histories created in "Inglourious Basterds" and "Django Unchained" create fantasies that rectify heinous injustices, the looking-glass world of "Once Upon a Time In Hollywood" deals with a specific crime. "Inglourious Basterds" is at its heart a revenge fantasy for Jews who have been victimized by anti-Semitism in general, and the Holocaust specifically; "Django Unchained" does the same thing for victims of racism in general, and slavery specifically. Yet while there were other victims of the Manson family murders, they didn't create systemic injustice or widespread social evils on the same level as Nazi Europe or the American South. As a result, rewriting the history of the Tate murders doesn't offer the same level of catharsis.

The second problem is that the story of "Once Upon a Time In Hollywood" doesn't earn the plot twist in the same way that the other two movies do by working so hard. In "Inglourious Basterds," viewers witness the horrors of Hitler's anti-Semitic policies, and see multiple characters attempt to fight back against those horrors before the narrative culminates in the assassinations of Hitler and other Nazi higher-ups. In "Django Unchained," Tarantino shows how slavery destroyed the lives of innocent people and establishes how racism was embedded into the society and culture of the South. When that story climaxes with the titular character obtaining vengeance, even audiences who weren't well versed in the history of this period understand where it was coming from.

"Once Upon a Time In Hollywood," on the other hand, has a more meandering plot. Tate is presented in the film as the embodiment of what Tarantino clearly views as the halcyon days of Hollywood — the carefree, spiritually liberating apex of the 1960s — but the entire story doesn't revolve around either Tate or the Manson family. It is, at its heart, the story of an aging actor who needs to reinvent his career and his close friendship with a stuntman suffering his own subtle existential crisis. Their eventual ability to save Tate isn't the inevitable result of their narratives, but comes out of nowhere, feeling shoehorned in rather than organic.

Finally, the twist in "Once Upon a Time In Hollywood" deprives the chief victim of her agency, something that Tarantino's previous alternate histories do not do. While sexism was not the chief factor in Tate's murder, it undeniably played a role in it, and so a proper parallel to Tarantino's previous pair of alternate history movies would have had her save her own life. Instead, Tarantino's movie has two men who barely know Tate come in and save the day, rendering her character an observer in her own narrative. In a movie that is supposed to give her life back to her, she barely factors into the equation.

Perhaps the worst part of all this is that it's symptomatic of deeper issues in "Once Upon a Time In Hollywood." While it contains much of the same intelligent dialogue and engrossing universe-building as the best Tarantino movies, this film lacked the same compelling storytelling that made earlier Tarantino works like "Reservoir Dogs," "Pulp Fiction," and "Jackie Brown" classics. It feels like Tarantino is so wrapped up in indulging in his own filmmaking style that he loses sight of what made his best movies work. The result is a film that, though entertaining, feels a bit like a missed opportunity.