What "Moscow Mitch" wants: An election overrun by trolls and plunged into chaos

Russian hackers invaded all 50 states. Trump and McConnell want it to continue. The media ponders "who wins" 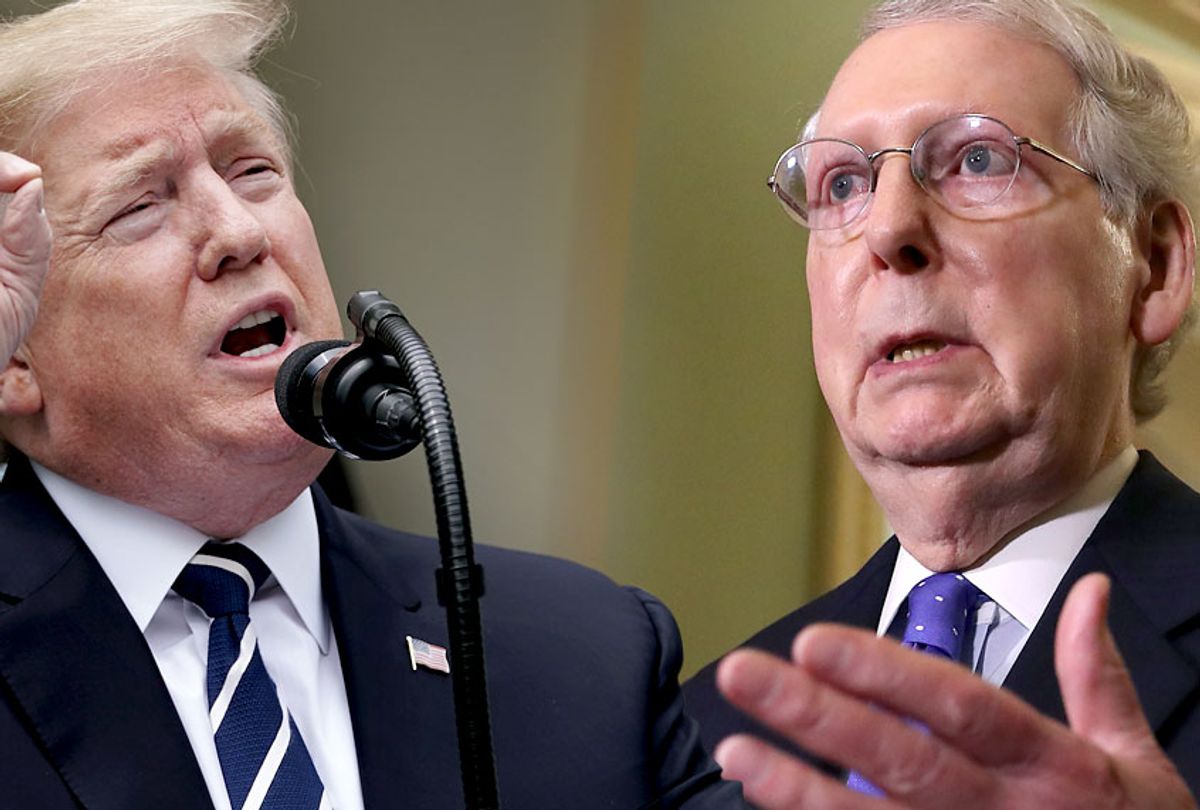 Unusual times demand unusual measures. If you value Salon's original reporting and commentary, please take a moment to support our writers directly. Right here, right now, you can make a direct contribution to Bob Cesca to help make his work possible. Every dollar you give goes directly to writers — Salon doesn’t take a cut.

In the interest of big-picturing the past week or so, we learned from the Republican-controlled Senate Intelligence Committee that Russian hackers successfully infiltrated election systems in all 50 states during the 2016 election cycle. We also learned that the accused felon who was installed as commander in chief as a likely consequence of that cyber-attack spent all weekend blurting racist gibberish on Twitter while cable-news talking heads wonder how it will play among the Midwestern diner crowd. Meanwhile, the Republican Senate majority leader refuses to pass any legislation safeguarding future elections.

It’s like finding out you have cancer, only to discover your surgeon is a shaky-handed drunken clown with a malfunctioning weed-whacker, and no one seems to notice.

The truth about what really happened in 2016 has been a slow drip, to put it mildly. Since Nov. 8, 2016, the extent of Russian infiltration of the American democratic process has been routinely and frustratingly underestimated and lowballed, with details gradually expanding from nothing to a few states to 39 states and now, with the 2020 election 15 months away, we’ve reached a full 50 states and, according to the Senate report, “an unprecedented level of activity against state election infrastructure.”

With every horrifying new revelation, investigators keep saying there’s no evidence any votes were changed — no evidence yet — but given how our knowledge of the attack’s extent is growing broader, I’m expecting such news to drop eventually. The trendline is surely moving in that direction, though proof that votes were changed isn’t entirely necessary to prove a catastrophic, election-altering invasion by the Russians.

The social media agitprop front of the attack alone clearly changed the minds of American voters long before ballots were cast. Likewise, the Senate report determined that “Russian cyberactors were in a position to delete or change voter data.” In other words, it might be a red herring to look for votes that were artificially flipped from Hillary Clinton to Donald Trump, or, for that matter, in down-ballot races. If Russia could change enough minds via thousands of trolls equipped with marching orders that micro-targeted Facebook users ripe for being duped, combined with perhaps altered or eliminated voter registrations, then it’s totally unnecessary to actually change votes.

But it’s anyone’s guess about the full arsenal of weapons they’ll deploy next time.

Accordingly, it’s terrifying to note ahead of the colossally important 2020 election that the Senate report, along with analysis from the NSA and other intelligence agencies, indicates that the Russian invasion into all 50 states was intended as a sort of reconnaissance effort to blaze a trail to be exploited “at a later date.” That could mean 2020, or literally any election from today forward.

And we’re only talking about one prong of one enemy’s attack. The social media front will surely grow in sophistication, perhaps involving new technology such as "deep fakes," and trolls will grow less obvious to the point where it’s almost impossible to weed them out. Experts, including Robert Mueller himself, believe other nations will borrow Russia’s strategy and muster their own knockoff attacks.

Of course they will. We were ripe for it, and we continue to leave ourselves vulnerable, almost deliberately so. Bear in mind that the Russian attack required unwitting footsoldiers on the ground inside the United States. Every voter who shared a dubious meme or changed his or her vote because of the Russian bombardment of Facebook with bogus ads, paid for in rubles, unknowingly volunteered to become combatants for the enemy. There’s very little indication we’ve learned our lessons, evidenced by the fact that our Facebook newsfeeds continue to be juiced with ludicrously obvious propaganda — each false item circumnavigating the world before the first commenter pops in to note it’s fake.

It’s aggravating enough that the cable news media is casually bending the jaw-dropping news of this crisis into its substance-free horserace script, whittling everything down to who won the week. We also have Mitch McConnell, who controls the agenda in the Senate, apparently believing it’s more important to allow foreign nations to game our system than to pass a House bill to protect that system.

Wait. Correction. McConnell blocked not one but two election security bills last week. The second required campaign officials to report contacts from foreign actors to the FBI. Neither bill will ever see the light of day, prompting MSNBC’s Joe Scarborough to appropriately nickname the Senate leader “Moscow Mitch.”

A Democratic bill passed in the House that would "direct $600 million in election assistance to states and requirebackup paper ballots."

Abipartisan bill imposing sanctions on any entity that attacks a U.S. election.

A bipartisan bill with severe new sanctions on Russia for its cybercrimes.

No alternatives have been introduced by the Senate Republicans. Meanwhile, McConnell successfully lifted sanctions against Rusal, a company linked to Russian oligarch and Paul Manafort associate Oleg Deripaska. Shortly after the sanctions were lifted, we learned that Deripaska is investing $200 million in Kentucky, McConnell's home state (where he faces a potentially difficult re-election battle next year). Coincidence? Not a chance in hell.

Imagine for a moment it’s the days after 9/11. Imagine if we heard that al-Qaida had infiltrated all 50 states preparing for another terror attack, and investigators had determined the next attack was imminent. Now imagine if then-Majority Leader Tom Daschle (a Democrat) had refused to hold a vote on the 2001 AUMF or the Patriot Act. Now imagine cable news and GOP heads exploding, rage-crying and targeting everyone responsible as “with the terrorists.”

As of right now, Mad King Donald and his co-conspirators in the Senate are making sure the door is wide open for continued attacks against our elections, the centerpiece of our representative democracy, with the ultimate damage being greatly diminished confidence in the integrity of the vote while the wrong candidates are artificially installed per the wishes of foreign invaders. Simply put: We face total chaos. And the party that controls the Senate, the White House and the Supreme Court is letting it all happen.