Is John Ratcliffe another Trump distraction or a terrifying sign of an authoritarian purge? Yes 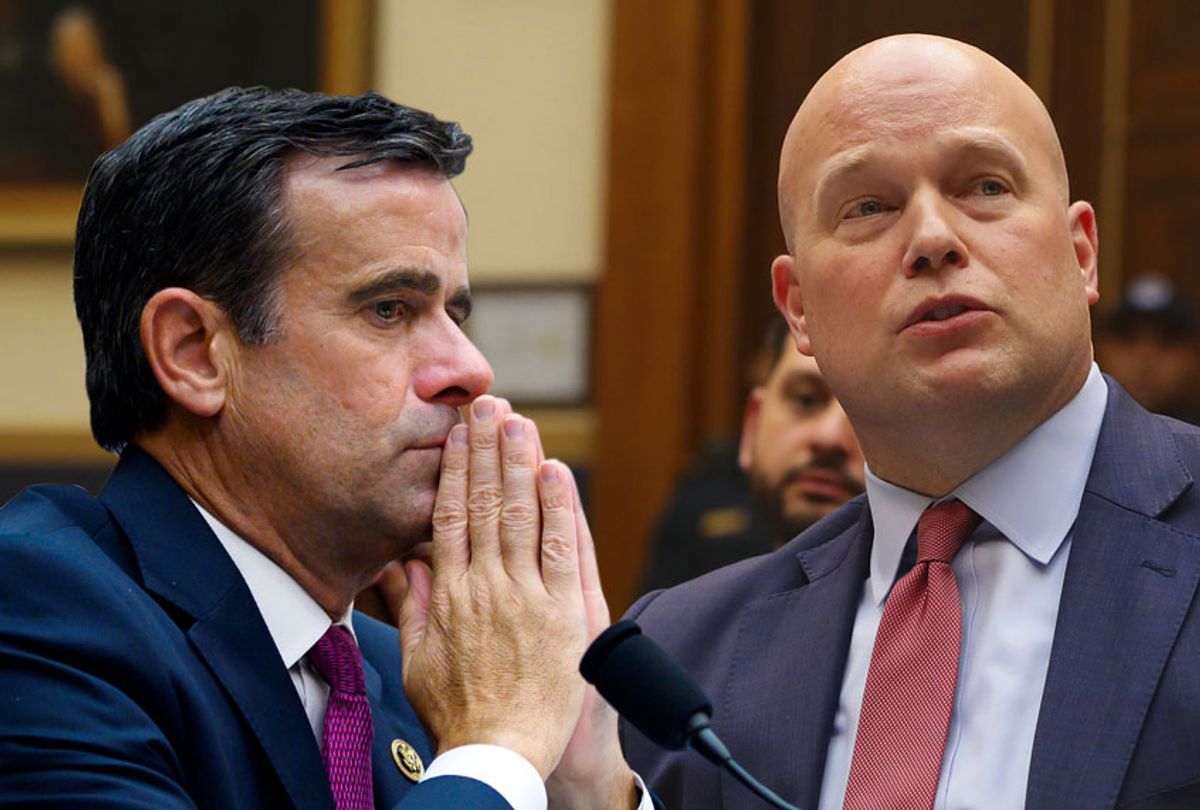 By this time no one should be surprised when Donald Trump hires a partisan hack to do a previously independent job in a vital government agency. After all, that's been his habit from the beginning. To the extent there were ever any nonpartisan Cabinet members or top advisers, it has been because he simply didn't know what the job entailed.

Trump fired both former FBI Director James Comey and Attorney General Jeff Sessions for being insufficiently loyal. Secretary of State Rex Tillerson, National Security Adviser H.R. McMaster and Defense Secretary Jim Mattis were effectively forced out for failing to properly toe his line. Since Trump really doesn't have an agenda beyond harassing immigrants and economic intimidation, the only real criteria at this point in his presidency is whether or not officials will do whatever it takes to protect him personally from myriad legal scandals and possible electoral defeat. Basically, the only job of the Trump administration for the next 15 months is to perpetrate a full-time cover-up.

Robert Mueller's report followed by his live testimony to Congress last week, made one thing very clear: The Russian government interfered in the 2016 election to benefit Donald Trump in a number of ways, from propaganda to stealing personal emails and dumping them on the internet to probing the election systems in all 50 states. All of this was based upon information gathered by U.S. intelligence agencies and allies across the globe.

Despite Trump's repeated caterwauling about "no collusion!"  Mueller made clear what we saw with our own eyes: Trump "welcomed" the election interference from Russia and has said that he would do it again if the same opportunity presented itself. In order to preserve the illusion that all this doesn't add up to a president who has betrayed his country and benefited from foreign sabotage, Trump and his accomplices in the media and in Congress have been forced to create a ludicrous alternate narrative that the investigation was a partisan witch hunt based on false information from the beginning.

That's why Trump has finally pulled the trigger and dismissed Dan Coats, the independent-minded director of national intelligence. Trump has announced he will replace Coats with one of his chief congressional henchmen, Rep. John Ratcliffe, R-Texas. It was reported last week that Trump consulted with his most slavish loyalist in the House, collaborator, Rep. Devin Nunes, R-Calif., about whom to appoint to the position. Ratcliffe is their thoroughly unsurprising choice (although there was initial speculation it might be Nunes himself). He's been an architect of the hard right's "investigation origins" conspiracy theory from the start.

As Will Sommer at the Daily Beast reminds us:

One of Ratcliffe’s biggest contributions to the Republican pushback on the investigation came in January 2018, when he claimed he had seen text messages between [Lisa] Page and [Peter] Strzok that suggested the existence of a “secret society” working against Trump. But Ratcliffe’s claims, which were subsequently amplified by pro-Trump media outlets, fell apart when the fuller text exchanges became public.

That was possibly the most embarrassing moment of the House Intelligence Committee's work under Nunes' chairmanship. But the willingness to make a fool of oneself in service of the president is considered a resumé builder  in Trump's Washington. Ratcliffe is now being nominated to what is arguably the most powerful intelligence job in the world.

There are many objections to Ratcliffe's appointment, starting with the fact that he is almost comically unqualified for the job and appears to have seriously embellished his resumé. It's not clear Ratcliffe has any actual experience in investigating or prosecuting terrorism cases, and he only held the post of U.S. attorney in Texas in an interim capacity for bout a year. There are serious reasons to doubt that he will provide the president with independent, unvarnished intelligence, and strong reasons to believe he will instead politicize the information to fit Trump's needs.

These are serious concerns to be sure, reminiscent of the ill-fated appointment of Matt Whitaker as acting attorney general. Indeed, one way to interpret this appointment is as a temporary placeholder, more or less in the Whitaker vein. Even the chairman of the Senate Intelligence Committee, Sen. Richard Burr, R-N.C., has reportedly warned Trump that naming a bomb-thrower like Ratcliffe is a mistake.

But there is actually a much bigger problem with Ratcliffe — and likely with anyone else Trump would nominate to that job if he goes down in flames.

Attorney General William Barr has already taken it upon himself to investigate the U.S. intelligence community for alleged partisan motives in initiating the original investigation into Russian interference (something that Burr's Senate committee ruled out in the first volume of its report.) Trump has also given Barr permission to allow Nunes access to classified information related to the investigation, telling Fox News' Sean Hannity that "this was a coup attempt ... we have some very great people, but we also have some very bad people. And I think we caught them." (This is part of the GOP's Bizarro World theory that Hillary Clinton somehow colluded with the intelligence agencies and the Russians — to help the Trump campaign. I know it doesn't make sense.)

Following that daft line of reasoning,  Trump has spelled out clearly what he expects Ratcliffe to do — purge the intelligence services of anyone who participated in collecting information about Russia and Donald Trump.

This is no longer a case of Trump ranting incoherently on Hannity and Twitter. He has his hatchet man Barr in place at the Justice Department, and is about to put a partisan toady in charge of the 17 sprawling intelligence agencies some of them so secret we barely know who works there or what they do.

Greg Sargent of the Washington Post asked the question this way: "[C]an President Trump and his loyalists continue to organize large swaths of the government around the single, overarching goal of shielding his corruption, misconduct and wrongdoing from any and all accountability?"

It would certainly appear that's the goal.

There are some indications that Ratcliffe may be too wild a choice even for the Republican Senate and Trump will end up naming someone more in the vein of Barr — a seasoned partisan warrior who the press will see as an "institutionalist," but who will nonetheless do the president's bidding. Considering how many veteran Republicans have eagerly fallen in line to serve Trump, it won't be hard to find someone to fit that bill.

But whether it's Ratcliffe or someone else, it's obvious that Trump is placing loyalists in the top law enforcement and intelligence agencies of the federal government, in advance of an election we have repeatedly been assured is likely to be penetrated by foreign actors. Senate Majority Leader Mitch McConnell is refusing to pass election security legislation, and having a mini-tantrum over the fact that critics are calling him out for it. When the law enforcement, criminal justice and national security apparatus is led by officials who are loyal to a single leader, and not to the people, that's the fundamental basis of authoritarian government. And that is exactly the goal of Donald Trump's administration.