“I don't think there's anything he has to apologize for,” the former vice president adds of his boss 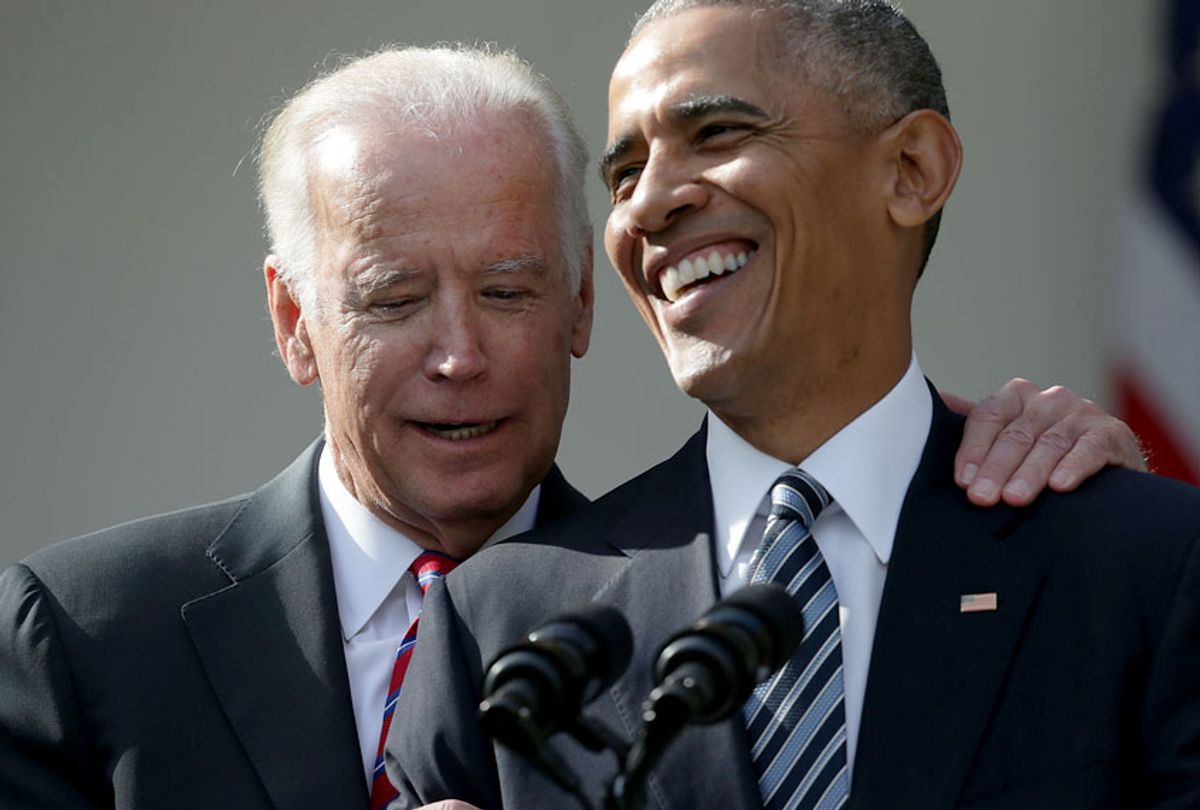 "I was a little surprised at how much incoming there was about Barack — about the president," Biden said, adding: "I'm proud of having served him. I'm proud of the job he did. I don't think there's anything he has to apologize for."

Biden also strongly defended Obama’s record and called comparisons of the former administration's policies on issues such as immigration to Trump's "absolutely bizarre."

"He changed the dialogue. He changed the whole question. He changed what was going on. The idea that somehow it's comparable to what this guy is doing is absolutely bizarre," Biden added as he contrasted Obama with Trump.

His strong defense of his former boss came one day after some Democratic presidential candidates appeared to criticize a number of Obama-era policies Wednesday night, including immigration and his signature legislation, the Affordable Care Act (ACA) or Obamacare.

Although Obama remains widely popular — and not just with Democrats in his own party, but with Americans across the political spectrum — the progressive wing of the party has long argued it will take a candidate with big and bold ideas to beat Trump in 2020.

Calls for a candidate with such progressive ideas can be seen by looking at the candidates' various proposals to reform the nation's health care system.

Presidential hopefuls like Sens. Elizabeth Warren, D-Mass., and Bernie Sanders, I-Vt., want to completely overhaul and revamp the nation's current health care system with "Medicare for All," while Biden has offered a full-throated support for building on the most popular tenets of Obamacare with the addition of a government-sponsored public option that was considered — and ultimately jettisoned — by some conservative Democrats in Congress during the ACA debate.

On Tuesday night, Warren denounced the current health care system as a "corrupt, rigged system that has helped the wealth and the well-connected and kicked dirt in the faces of everyone else," while Sen. Kamala Harris of California argued the following night that Biden's plan "will keep and allow insurance companies to remain with the status quo, doing business as usual, and that's going to be about jacking up co-pays, jacking up deductibles."

Obama's record on deportations and immigration also came under scrutiny during the debate at a time when Trump's "zero-tolerance" immigration policy has sparked international outcry.

New York City Mayor de Blasio pressed Biden on whether he thought the 3 million deportations which occurred under Obama's leadership were a good idea, while former Obama Housing and Urban Development Secretary Julian Castro told the former vice president that when it comes to immigration, "it looks like one of us has learned from the lessons of the past — and one of us hasn't."

Biden also came under fire after he declined to share the details of conversations he had with with Obama over immigration deportations, only offering that the former president "moved to fundamentally change the system" but that "much more has to be done." His comment prompted Sen. Cory Booker of New Jersey to argue Biden "can't have it both ways."

"Mr. Vice President, you can't have it both ways," Booker said Wednesday. "You invoke President Obama more than anybody in this campaign. You can't do it when it's convenient and then dodge it when it's not."

On the campaign trail and on stage at events, Biden has frequently touted his work with Obama, who remains a highly popular figures within the Democratic Party.

"Am I only one who misses Barack Obama in this room?" Tom Perez, the chairman of the Democratic National Committee, asked the audience before the second night of debates Wednesday as the crowd erupted into roaring applause.

Booker, on the other hand, defended his criticism on Thursday, but noted: "Heck, if [Obama] was running for president for a third term, I wouldn't be running."

"The reality is we have a situation right now where the president is doing things to this country that are perverting our very values and ideals, and talking about what our plans would be — different from the previous president, different from the current president — is not a bad thing," Booker said.