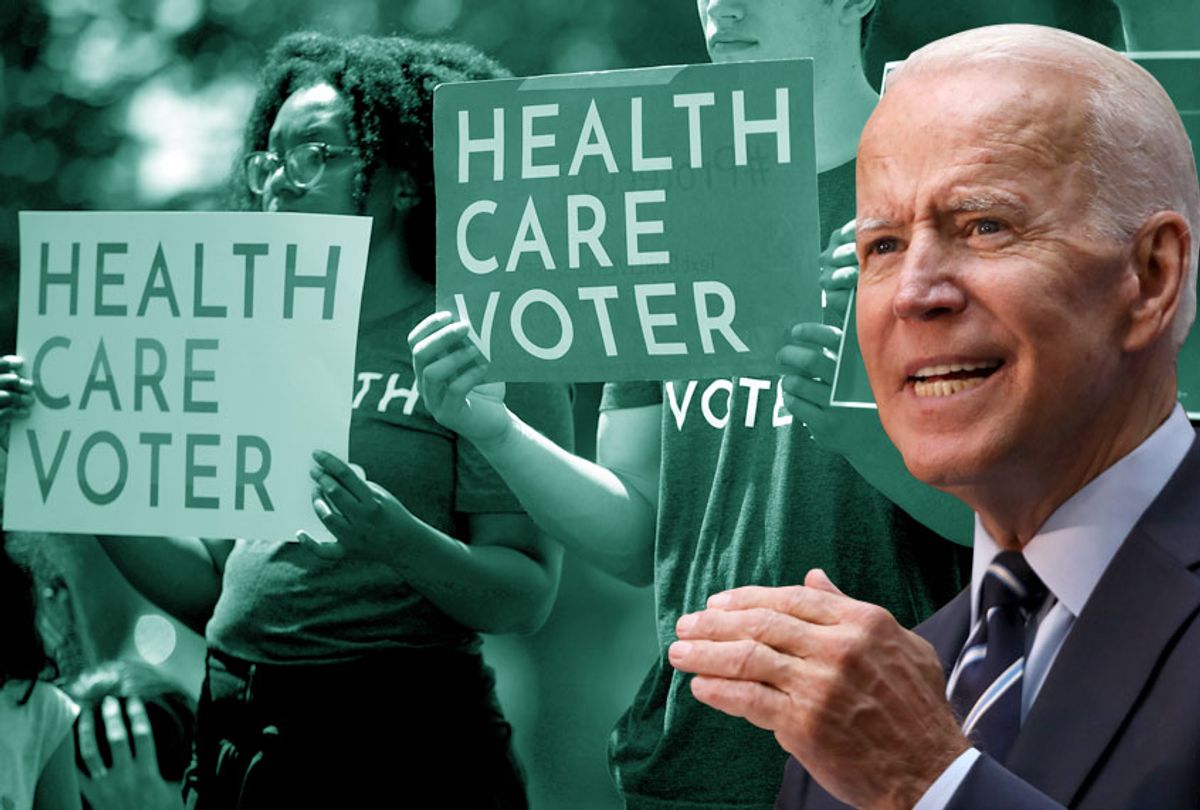 The former vice president's plan would develop on the most popular tenets of Obamacare— from Medicaid expansion to protections for patients with pre-existing conditions — by allowing Americans to purchase a new government-sponsored public insurance option such as Medicare.

The measure would enable Medicare to directly negotiate drug prices, allow the importation of prescription drugs from abroad and increase the value of tax credits to lower premiums and extend coverage to more Americans. Biden said families that make between 100 percent and 400 percent of the federal poverty line may receive a tax credit to reduce how much they have to pay for insurance. In addition, Biden would also eliminate the 400 percent income cap on tax credits to lower costs for working-class families.

The plan also seeks to expand coverage to low-income Americans in 14 Republican-led states that have refused to expand Medicaid under the ACA. The roughly 5 million people who would qualify for Medicaid if their states had expanded the program could enroll in the Biden Plan without paying any premiums. States that expanded Medicaid could enroll Medicaid recipients in Biden's premium-free public option as long as they continue to pay their current share of the cost covering those individuals. Biden's proposal would also automatically enroll individuals making below 138 percent of the federal poverty line into his plan by interacting with public schools and low-income programs like SNAP.

It also includes proposals to reduce the costs of prescription drugs. His plan would repeal the law that allows drug corporations to avoid negotiating lower prices with Medicare. It would also limit launch prices for drugs that face no competition. The Secretary of Health and Human Services would establish an independent review board to assess their value. The board would recommend a reasonable price based on the average price in other countries or set the price at the Medicare rate if the drug is entering the U.S. market first. The Biden Plan would allow private insurers to access a similar rate.

Price increases for brand, biotech and generic drugs would be limited to inflation. Drug manufacturers that increase drug prices over the general inflation rite would face a tax penalty. In addition, consumers would be allowed to purchase prescription drugs from other countries.

Biden's plan would prohibit pharmaceutical companies from taking a tax break on their advertising of prescription drugs, as proposed by Sen. Jeanne Shaheen, D-N.H., earlier this year. The U.S. and New Zealand are the only two countries that allow direct-to-consumer pharmaceutical advertising, and economists have estimated that increases in drug spending can be partly attributed to an increase in advertising for prescription drugs. Additionally, Axios reported last year that top drug companies were using a reported $50 billion in savings from tax breaks on buyback programs and executive bonuses.

The Biden Plan, which the campaign estimates would cost $750 billion over a decade, would be paid for in part by reversing some of Trump's tax cuts. It is less radical than the new "Medicare for All" proposal rolled out by presidential hopeful Sen. Bernie Sanders, I-Vt. in April. Several top Democrats vying to take on President Donald Trump in 2020 have embraced the measure since Sanders first popularized it during his first presidential run in 2016.

The Sanders bill is essentially an expanded version of Medicare, the federal insurance program that now primarily serves roughly 44 million people age 65 and older and some with disabilities. It proposes eliminating private insurance and moving the country to a government-run plan, in which almost every individual would be covered by Medicare.

"I understand the appeal of 'Medicare for All,' but folks supporting it should be clear that it means getting rid of Obamacare," Biden said in a video announcing his plan. "And I'm not for that."

Progressive Democrats, on the other hand, have argued that a public option does not go far enough.

Sen. Elizabeth Warren of Massachusetts and New York City Mayor Bill de Blasio have offered full-throated support for Sanders' "Medicare for All" proposal, which would eliminate private health insurance. While co-sponsors of Sanders' bill — Sens. Cory Booker of New Jersey, Kirsten Gillibrand of New York and Kamala Harris of California — have made the case for making a government plan available to all Americans, they believe private insurance should still play a role in providing coverage — although it is unclear what that role would entail.

Such a plan — "Medicare for All" alongside private health insurance — has received support from Reps. Tulsi Gabbard of Hawaii and Tim Ryan of Ohio, entrepreneur Andrew Yang and South Bend Mayor Pete Buttigieg, who dubbed the proposal "Medicare for All who want it."

The division among the candidates on how to reach universal health coverage was seen clearly at the first primary debate of the 2020 race.

Indeed, the road to universal coverage in the U.S. has been long and complicated. Health care reform was a prominent issue in the 2008 election cycle, and the passage of Obamacare in 2010 brought sweeping changes to the nation's health system. The number of uninsured Americans fell dramatically since the law passed, dropping from 48.6 million people in 2010 to 29.7 million in 2018. Studies have found that the ACA caused fewer people to struggle with medical bills; avoid or delay treatment because of cost; and that medical debt has declined.

Still, health insurance in the U.S. remains one of the most expensive in the world, and coverage remains increasingly out of reach for millions of Americans. The health care system is still difficult to navigate, meaning many consumers struggle to get the care they need in a timely fashion, make sense of medical bills and understand insurance plans filled with abstruse cost calculations and bureaucratic jargon. The U.S. also remains an outlier among developed countries by not having universal health insurance.

In the announcement video for his health care plan, Biden said: "I believe we have to protect and build on Obamacare . . . I was very proud the day I stood there with Barack Obama when he signed that legislation . . . I know how hard it is to get that passed — I watched it. Starting over makes no sense to me at all."