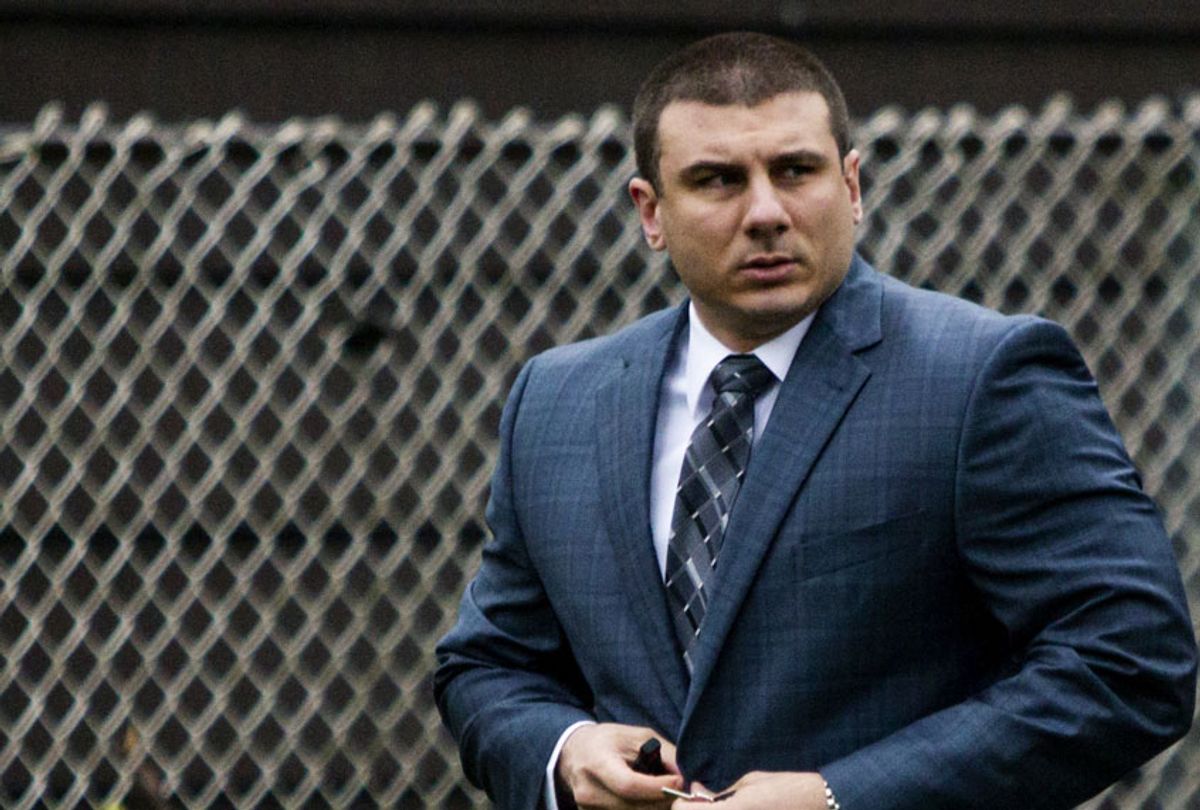 The white New York City Policy Department officer accused of fatally choking unarmed black man, Eric Garner, has been suspended — a turning point in the case that captured the nation's attention and prompted protests from coast to coast over the use of excessive force by police.

The development came just hours after a New York administrative judge recommended that Pantaleo be fired.

Maldonado's long-awaited recommendation marks the latest move in an internal disciplinary process that will determine Pantaleo's future with the NYPD. Officials with the Civilian Complaint Review Board, the city agency charged with police oversight, and Pantaleo's lawyer now have roughly two weeks to draft responses, according to CNN. O'Neill will ultimately decide the final outcome.

Maldonado's recommendation follows a departmental trial earlier this year, in which Pantaleo declined to take the stand to explain his role in Garner's death in July 2014.

Pantaleo has been accused of using a prohibited chokehold on Garner while attempting to arrest him for selling untaxed cigarettes — a low-level misdemeanor. Video footage of the encounter appears to show Pantaleo holding Garner in a chokehold for 15 seconds, as Garner can be heard repeatedly uttering, "I can't breathe." During that time, another officer can be heard shouting, "He's down." However, Pantaleo did not let go.

Garner, a father of six, gasped and wailed that he could not breathe 11 times before going into cardiac arrest. He was later pronounced dead at a nearby hospital.

In August 2014, Garner's death was ruled a homicide by the New York City medical examiner's office, and the medical examiner testified that Pantaleo's alleged chokehold caused Garner to have an asthma attack, which was "part of the lethal cascade of events."

Still, a grand jury on Staten Island declined to indict Pantaleo in late 2014, and the officer has remained on paid desk duty since Garner's death.

Pantaleo has maintained he used approved an approved technique called the "seatbelt" on Garner.

De Blasio would not say if he believes Pantaleo should be fired from the NYPD at a press conference Friday, but he called the recommendation to fire Pantaleo the "beginning of some peace."

The mayor then assailed the U.S. Justice Department (DOJ) for declining to bring federal civil rights or criminal charges against Pantaleo following an extensive five-year investigation.

"Until today, the Garner family has been failed by this entire process," the New York City mayor said.

"Today, we finally saw a step towards justice and accountability. We saw a process that was actually fair and impartial," he continued. "I hope this will now bring the Garner family a sense of closure and the beginning of some peace."

"We have a lot more work to do. We'll be at this a long time," de Blasio added. "But we all have a sense of common mission: There can never be another tragedy like this."

Donoghue called Garner's death a "tremendous loss" but said "the evidence does not support charging police officer Pantaleo with a federal civil rights violation." He said there was insufficient evidence to prove beyond a reasonable doubt that Pantaleo "willfully" used excessive force to violate Garner's rights, as required under the law.

Garner's mother, Gwen Carr, decried the decision not to pursue charges against Pantaleo during an emotional press conference held in the wake of the DOJ's decision. She invoked her son's dying words, "I can't breathe," which have become a rallying cry for police reform activists around the nation.

"We're here with heavy hearts because the DOJ has failed us," she said. "Five years ago, my son said, 'I can't breathe' 11 times. And today, we can't breathe, because they have let us down."

"We might not never know justice in the DOJ. But I think there will be justice, and we’re going to keep fighting," she said. "We're not going away, so you can forget that."

"We are asking the commissioner to make the right decision — that officer Pantaleo and all the officers who was involved in my son's death that day need to be off the force," she continued. "The streets of New York City are not safe with them walking around."

Carr was joined by the Rev. Al Sharpton, who blasted the ruling as a "moral disgrace" and "judicial malpractice."

Federal investigators investigated the circumstances surrounding Garner's death beginning in 2014, after a grand jury in New York declined to criminally indict the police officer. In 2015, the city of New York paid out nearly $6 million to Garner's family in a settlement.