Inside the downfall of Dean & DeLuca, a once dazzling luxury food store dims its lights 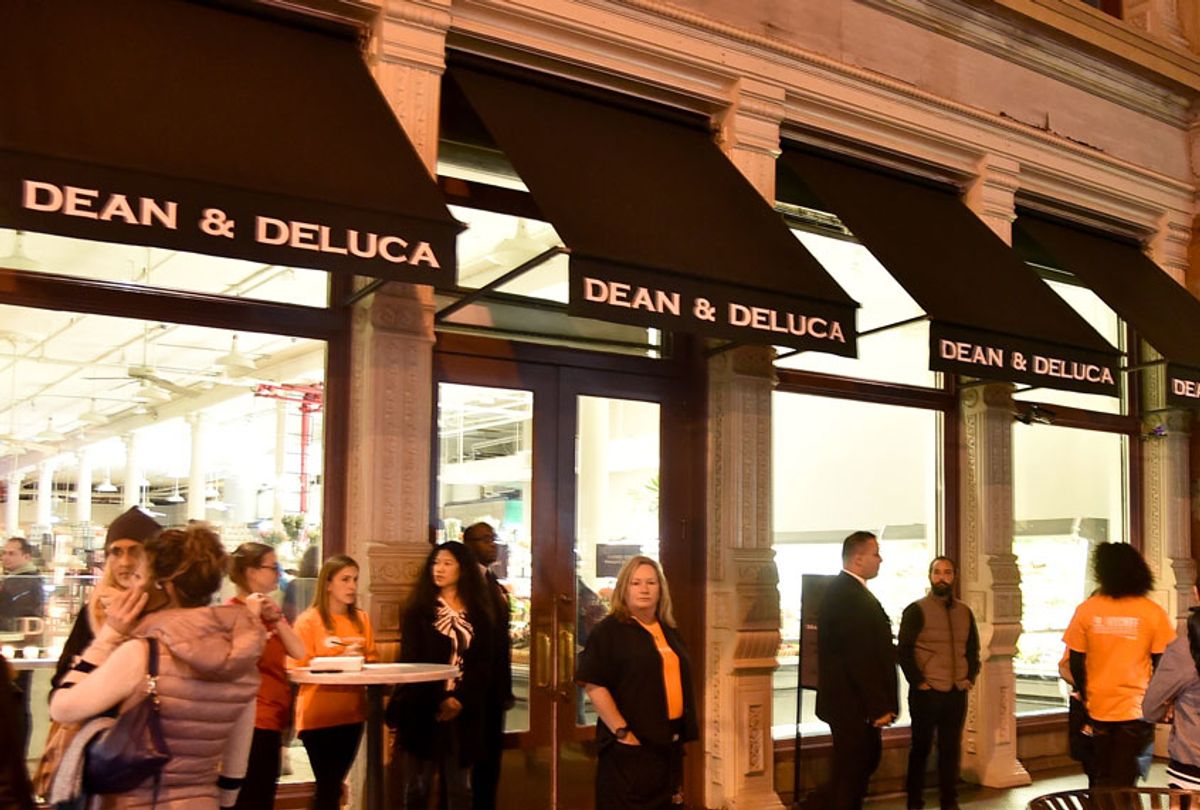 The fancy grocer Dean & DeLuca has been in a downward spiral for some time. Earlier this month, the New York Times published a story that confirmed what those of us close to the company knew for a few years — Dean & DeLuca is in serious trouble. They’re mired in lawsuits from vendors who claim that the store owes them hundreds of thousands of dollars. They’ve closed locations in Kansas City, Georgetown, the Upper East Side, and Napa, along with their new concept store “Stage,” which opened just over three months ago in Manhattan’s Meatpacking District. At their flagship in SoHo, the shelves are embarrassingly empty.

I wasn’t surprised. Those close to the store have been watching it struggle and falter years. Finally, it seems the end is near.

Before I was an employee of the company, I was a fangirl. When a recruiter called me looking for a copywriter for a specialty food store in 2016, I wasn’t too excited. I had worked, writing copy for Fairway Market and Murray’s Cheese, and I wasn’t interested in more of the same. But then they mentioned the name of the company: Dean & DeLuca. And my heart fluttered a little.

Joel Dean, Giorgio DeLuca, and Jack Ceglic opened their first store in an old warehouse in 1977 in SoHo, at the time an arty, edgy neighborhood. “They were immediately famous because of how fucking cool they were,” says Steven Jenkins, one of their first employees who went on to be a bigwig in the specialty food world, writing “The Cheese Primer” and helming cheese and olive oil at Fairway Market. They created a temple to fine foods that were “gobsmackingly amazing,” according to Jenkins. Early Dean & DeLuca changed the New York foodscape by being the first to import exciting ingredients that would become foodie staples, like sundried tomatoes and balsamic vinegar from Modena. Their store was gorgeous and aspirational, stocked with lovely and extraordinarily pricy food. To me, it always felt like a sort of fancy food museum.

I did it; I took the job. I was the Senior Copywriter — the only copywriter — for the company from March 2017 until nearly the end of that year, when my job was the casualty of a sweep of layoffs. Working for Dean & DeLuca was a pretty great gig. I got to write about — and sometimes enjoy — grass-fed Tomahawk steaks and tins of caviar.  It was the second round of layoffs since I started, and in those ten months seemingly everything changed at Dean & DeLuca.

In March, the New York staff moved into a stunning new office on the 37th Floor at 3 Park Avenue. In May, Dean & DeLuca hired a new President, Laura Lendrum, who had previously held the same position at Ralph Lauren Corp. We had a shiny new kitchen and highly Instagrammable views of NYC. It was in sharp contrast to the other food stores where I had worked, whose offices were in cramped, shabby quarters in or near warehouses (My dad told me my shared office over the cold room at Fairway in Harlem looked like a low-security prison). I was told repeatedly by Dean & DeLuca leadership that we were different. We were better. We were luxury.

Eleni Gianopulos, owner of New York City bakery Eleni’s Cookies, has supplied Dean & DeLuca with intricately decorated custom cookies for over 15 years. “I’ve always been paid late but I’ve always been paid in full,” Gianopulos told me of her company’s relationship with Dean & DeLuca when we spoke last year. Then at the end of 2017, that changed. “We negotiated our terms from net 60 to net 30 [days], but then sixty days passed, then more. We were calling and calling and getting no response; we couldn’t get a hold of anyone in accounts payable.” Eventually, Gianopulos received an email that promised she would be paid in full  — and another, and another. But the check never materialized.

Eleni’s claimed Dean & Deluca owed them $86,000 for never-paid-for-cookies. And they are not alone. Ceci Cela Patisserie sued the company for the $70,000 it alleged they were owed. Countless other vendors are no longer doing business with the grocer, afraid they’ll never recoup payment. “They owe so many vendors so much money,” says Gianopulos. “I own a small business. For us, this is an insane amount of money.”

It was a source of constant frustration and shame in the office — how were we supposed to do business when we couldn’t pay our vendors? How was I supposed to write odes to these gorgeous chocolates that we couldn’t actually afford?

At the same time, we were spending money on things that seemed definitely questionable and potentially crazy, like flashy sponsorships for the US Open tennis tournament and a PGA Tour golf tournament in Fort Worth that was called the Dean & DeLuca Invitational. The company spent a lot of resources launching a snack bar called the Dean & DeLuca Bio Nutrition Bar that was supposed to be revolutionary even though it tasted like chalk.

There was also a team of people who worked for what we internally called “Small Format” and would eventually become “Stage” — the short-lived fast-casual Meatpacking restaurant was supposed to be a pilot for a larger concept. The “Small Format” folks got to spend weeks traveling around Europe to seek inspiration from culinary adventures. We were never jealous at all, of course. Perhaps those funds could better be spent salvaging Dean & DeLuca’s core retail business.

Then employees started leaving. There were lay-offs, including legacy food experts that brought decades of passion and knowledge (and my own, too). Plenty of employees quit of their own volition — the writing was on the wall — and they were not replaced. The posh offices were feeling very empty. “There was nobody left to run the company,” said a former coworker who asked to remain anonymous. “The IT department left. The head of catering left. The merchants left. Our corporate chef left. We had a bunch of consultants helping us, but we haven’t been using them because they didn’t get paid.”

“Everything is drying,” a former coworker told me 2017. “But the worst thing is that they don’t have any plans in motion to make things better.”

What went wrong? How could an iconic brand reach so high and fall so low? The recent struggles follow a long history of financial trouble. Pace Development Corp., a Thai property developer, bought Dean & DeLuca Inc. in 2014 for $140 million. Before that, it had been owned by Leslie Rudd, an entrepreneur from Kansas. “There were a whole bunch of owners,” says Jenkins. “The store soon became a parody of what it was before.”

The foodscape has changed radically in the 40 years since 1977, when Dean & DeLuca was a pioneer. Now there are dozens of places to purchase caviar, fine cheese, and quality olive oil in stores and online. From Whole Foods to Fresh Direct, these products are more ubiquitous than ever before. Retailers are facing debilitating challenges across sectors. But for years, Dean & DeLuca seemed to be able to ride on the coattails of its former glory. It was a sort of sad rallying cry in the office: “The brand is still so great!”

“The owners got disgruntled with a business plan that didn’t make any sense, and the original owners never made any money at all” Jenkins says. He called Dean & DeLuca’s prices “the most ridiculous in the world.” Last summer, they were selling a simple cake for $95 and a whole hog for $7850 online. Now their entire e-commerce operation is shut down. That fancy office I loved is long gone, as are pretty much all of the people I worked there alongside.

A former head executive at another grocer offered another explanation: “It makes sense that Dean & DeLuca is successful in New York City, where there is a high density of sophisticated and educated customers with money to spend,” he posited. But as the market expanded to more and more locations, there were fewer potential customers. He also suggested that a leveraged buyout was a “flawed model for a grocer…you have to keep borrowing more and more money to get out from all that debt. The amount of debt is practically insurmountable.”

For small businesses like Eleni’s, a spot on the shelves at Dean & DeLuca was a big deal. It was a placement that once represented a real shot at success for artisanal food businesses. Over the years, it came to mean lining the pockets of a multibillion-dollar conglomerate at their own expense. Dean & DeLuca helped usher in today’s specialty food renaissance; as consumers became more educated, they demanded more while the once great store offered less and less. I mourn Dean & DeLuca on a personal level, too. Oh, how I loved gazing into the cheese case and admiring the three-figure-price-tagged bottles of olive oil. The store seemed like a delicious dream. But as the dream slowly withered, I changed, too. Beautiful packaging and museum-piece displays don’t capture my heart the same way they once did. I like style just fine, but it’s not enough to replace the substance that Dean & DeLuca has increasingly lost.

After all these years of writing about food, what matters to me is the people who work their asses off to make it — the farmers, cheesemakers, bakers, and butchers. Any place that sabotages these artisans instead of supporting them doesn’t deserve our money or a place in our culinary imagination. I still have big food dreams, and I’m taking them elsewhere.