The requirements for voting in Florida has put up limitations for many low-income voters. 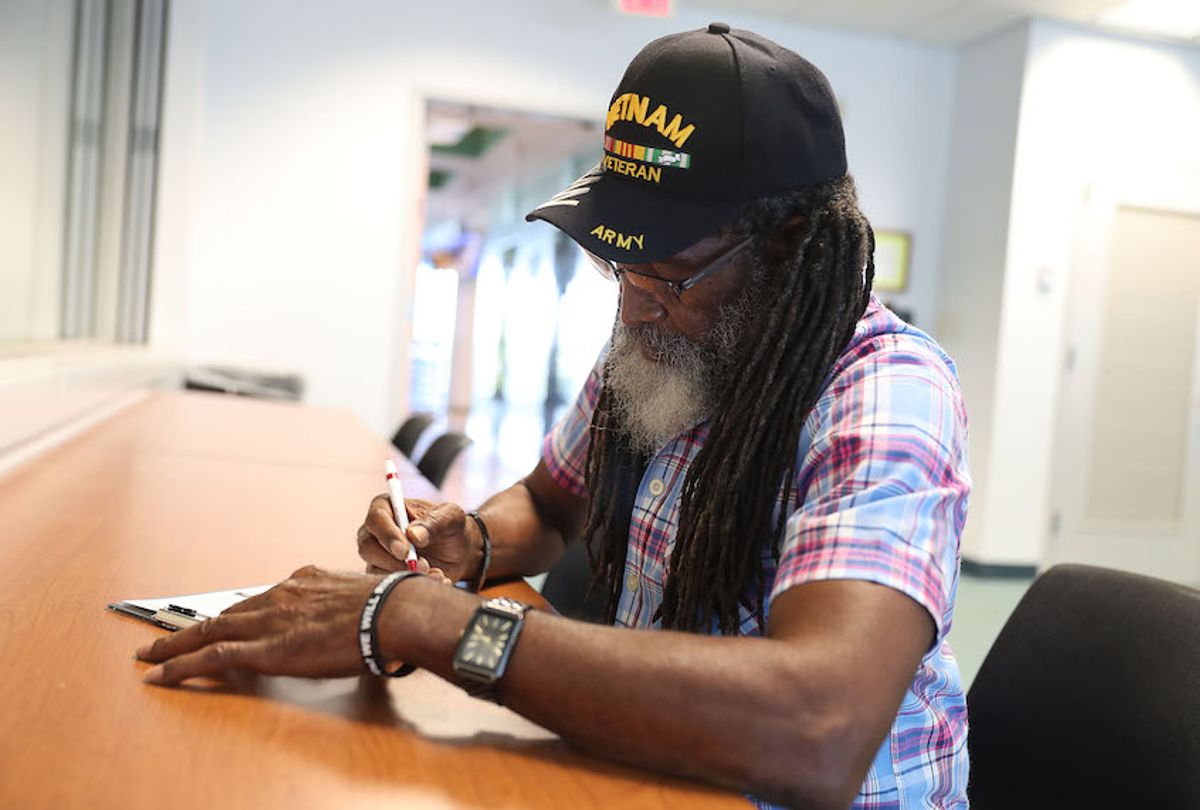 Clarence Singleton registers to vote at the Lee County Supervisor of Elections office on January 08, 2019 in Fort Myers, Florida. Mr. Singleton is able to register to vote for the first time after his right to vote was taken away in 2008 as a new constitutional amendment took effect, which automatically restores voting rights to most people who have felonies on their record. The referendum overturned a 150-year-old law that barred people with felony convictions from voting. (Photo by Joe Raedle/Getty Images) (Joe Raedle/Getty Images)
--

In 2018, Florida voters made history by approving an amendment to the state constitution restoring the right to vote to formerly incarcerated people with nonviolent felony convictions, overturning a Jim Crow-era law that disenfranchised an estimated 1.4 million potential voters. Low-income people and people of color are disproportionally criminalized, and Florida incarcerates more of its people than any single country on Earth. As a result, one in five Black citizens and 10 percent of the state’s adult population had lost the right to vote under the law — more than any other state in the nation.

The ballot initiative was a major victory for voting rights and racial justice groups, but Republicans in the Florida legislature quickly put up roadblocks for aspiring voters. To “implement” the new law, state lawmakers passed a bill requiring people with felony convictions to pay off all court fines, fees and restitutions related to their sentence and parole or probation, which can include medical debts incurred while in prison and legal costs imposed on low-income people relying on public defenders. A wealthy person found guilty of a crime such as financial fraud may be able to easily afford the cost of regaining their voting rights, but many people who are criminalized cannot. A 2010 analysis of more than 22,000 people on probation, parole or community supervision in Florida found that they owed an average of $8,195 as a result of their sentences, but the average Floridian returning from prison only earns $1,559 a month. Advocates argue this creates an unconstitutional precondition to voting based solely on wealth.

Voting rights groups quickly began calling the requirements a modern-day “poll tax,” a reference to unconstitutional fees imposed at polls in the South to prevent poor Black people from voting. Poll taxes were abolished in the 1960s. Florida is far from alone. For millions of people who have interacted with the criminal legal system in 30 states across the country, the right to vote often hinges on their ability to pay fines and fees related to their sentences, according to a report released today by the Campaign Legal Center and the Civil Rights Clinic at Georgetown Law School. The racial and economic disparities within the criminal legal system are well-known, so these modern-day “poll taxes” are disproportionately imposed on people of color and low-income people who are likely to face additional barriers to employment due to their legal records. Such voters are also more likely to support Democrats and progressive causes.

As of 2016, one in 13 Black citizens had their right to vote revoked compared to one in 56 non-Black voters, a stunning disparity rooted in both the criminal legal system and state laws governing access to the ballot. The report draws a link between today’s debt-related voter disenfranchisement and “Black Codes,” such as poll taxes and literacy tests, instituted in the decades after slavery to prevent Blacks from voting. The Civil Rights Movement of the 1960s successfully fought to eliminate many of these historical barriers to the ballot, but laws barring felons from voting remained. Today, more than half of those who have lost the right to vote are no longer incarcerated and live in a state that could deny them the right to vote based on their wealth, according to the report.

“With these laws in particular, they are not race neutral,” said Chiraag Bains, director of legal strategies at Demos, in a call with reporters. “These laws are deeply rooted in an attempt to exclude Black people from our democracy.”

Today, only Vermont and Maine do not revoke any voting rights for people with felony convictions: They are the only states in the nation where people in prison can vote. In 16 states, voting rights are typically restored automatically after release from prison. Thirty states provide paths toward regaining voting rights after incarceration, but these paths are often blocked when would-be voters are unable to pay off their criminal legal system debt. In Florida, Alabama, Arizona, Arkansas, Georgia and Tennessee — all states with some of the highest incarceration rates on the planet — state law explicitly demands that convicted felons pay off “legal financial obligations” before regaining the right to vote. In 20 states, people convicted of felonies can regain the right to vote after completing parole or probation, which requires full payment of fines and fees. In Iowa and Kentucky, only clemency granted by the governor will restore voting rights, and this typically requires paying any outstanding legal debts to the system — otherwise, people with felony convictions are disenfranchised for life.

“If you are going to refer to voting as a right … then why should money ever come into the equation, period?” said Aderson Francois, professor and director of the Civil Rights Clinic at Georgetown Law. “We don’t say [formerly incarcerated people] can’t get their right to free speech back unless they pay.”

Are these “legal financial obligations” actually debts to society that should be paid before entering the ballot booth? That question is sure to come up as voting disenfranchisement regimes are challenged in court. In some cases, sentences include “restitution” payments to crime victims. However, the criminal legal system often requires defendants to pay for their own prosecution and even incarceration, parole and probation. Additionally, judges may impose fines as a form of punishment.

Most courts and many probation and parole offices also collect fines and fees, including late fees if other fines are not paid on time. In fact, late fees can stand in the way. After voting in the 2008 and 2012 election, Alfonzo Tucker Jr. of Tuscaloosa, Alabama, received a letter informing him that he had been purged from the state’s voter rolls because of a 20-year-old conviction. Tucker, a Black man, was told to pay $1,515 in fines and fees; he signed up for a payment plan and paid $1,511. The state imposed a $135 late fee over the last $4 and later used this debt to prevent Tucker from voting in the 2018 midterms. Under the law in Alabama, at least, late fees cannot be used to disenfranchise a voter, but right-wing myths about ballot fraud have made voter purges common in many states. With help from the Alabama Voting Rights Project, Tucker has since paid the $4 and regained his right to vote. However, late fees continue to disenfranchise untold numbers of people.

“They are keeping mainly Black people from voting here,” Tucker said during a conference call, adding that his son also received a letter from the state about losing his right to vote due to criminal charges, even though he has never been arrested for a crime.

Where is the money from all these fines and fees going? In many jurisdictions, this revenue is used to fund court and police operations and even to pad unrelated municipal coffers, according to the report. Consider Ferguson, Missouri, where a 2014 uprising in response to the police killing of an unarmed Black teenager turned the city into a poster-child for racist policing and excessive force. Federal investigators determined that the city government (made up mostly of white folks) had set a target for $3 million in revenue from criminal fines and fees — revenue that was raised by targeting Black residents for tickets and arrests.

For many, the cost of being criminalized quickly adds up. Finding a job can be difficult after incarceration, and families often must help with lingering costs. In one survey, the average family owed about $13,600 in fines and fees alone. Among low-income families, 58 percent were unable to afford theses costs, and 67 percent of formerly incarcerated family members were still unemployed or underemployed five years after their release. Nationally, 10 million people in the United States owe more than $50 billion in fines and fees related to criminal convictions, according to the report. This explains why so many people complete their sentences but remain too poor to regain their voting rights. Some states do provide waivers for those who are unable to pay all of their “legal financial obligations,” but the application process varies widely from state to state and is often confusing and onerous, according to the report.

However, thanks to the work of activists and formerly incarcerated people, some states are moving toward reform, unlinking voting from payment of fees. Colorado and Nevada changed their laws this year, and now people convicted of nonviolent felonies in those states regain voting rights automatically after incarceration. Restoring the right to vote automatically following a prison sentence is the most effective way to end modern-day poll taxes, according to the report. Of course, states could also pass laws assuring the right to vote to everyone — whether they are incarcerated or not.