The price of a leaderless Democratic Party 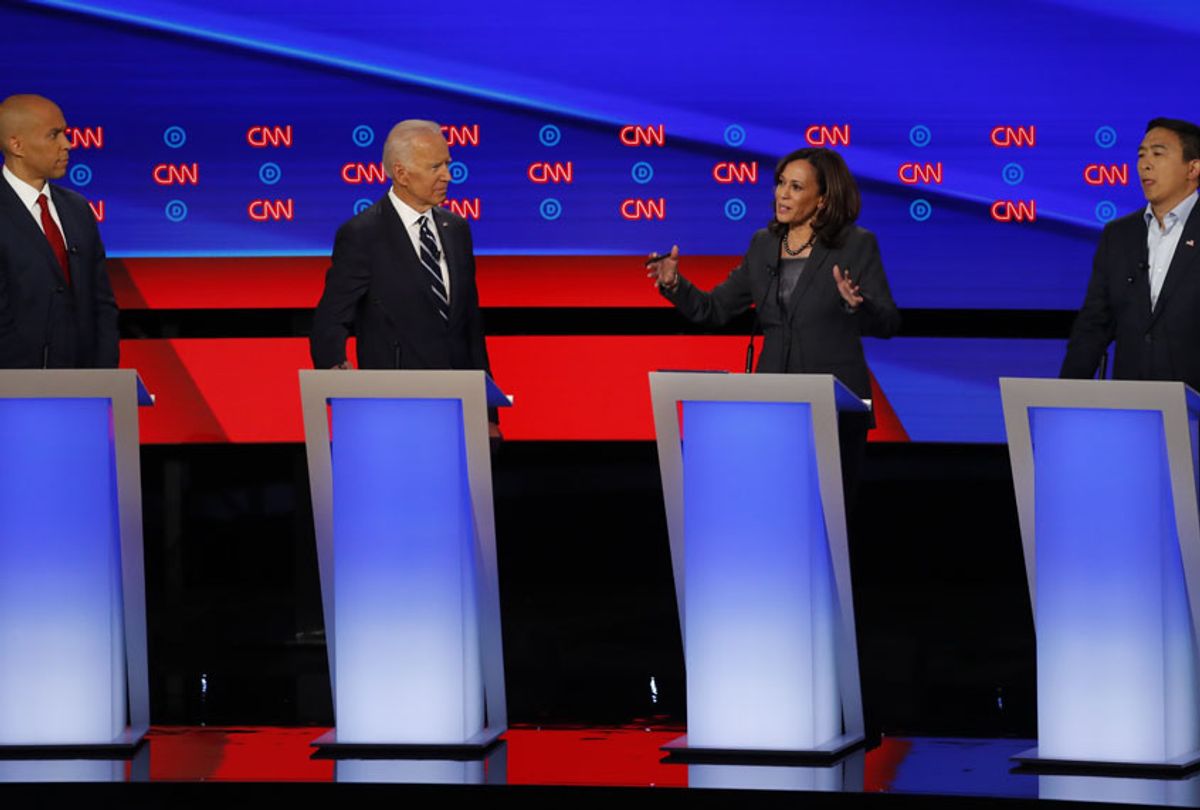 Did you survive the second round of the Democrats’ presidential primary debates this week? I didn’t. I had to switch channels about the third time one of the candidates used “failures” of the Obama presidency to attack poor Joe Biden, who looked snake-bit every time it happened. Who were they running against, anyway? Donald Trump must have been picking up the phone and ordering another Big Mac by the time they were half-finished. The debates each night looked and sounded like a reality show he could have hosted.

Instead, they had three fools from CNN treating the whole thing like a lightning round on “Jeopardy.”

Could it have gotten any worse? The CNN hosts seemed to be reading their questions off a tip-sheet from the Republican National Committee, playing a game of “gotcha” with the various candidates’ health care plans. Someone should have told Jake Tapper to call the White House and ask Trump most of the questions he was firing at the Democrats. The answer every one of them should have given was simple: 20 states controlled by Republicans have sued to end Obamacare, and the Trump justice department has joined them. Ask the White House what it’s going to do when 20 million Americans are dropped from their health care plans, and a hundred-plus million will no longer be eligible because of pre-existing conditions. We’re going to take care of Americans’ health care. That’s all you need to know.

We called the 2015 Republican debates the clown car, remember? That was when the likes of Trump, Marco Rubio, Rand Paul, Chris Christie, Mike Huckabee and Ben Carson took the stage in prime-time. The junior varsity, including Carly Fiorino, Lindsey Graham and Rick Perry, were consigned to a slot at 5 p.m.

This is the price we’re paying for a leaderless Democratic Party. We’re essentially copying the Republican 2015 debates. Twenty candidates met the minimum qualifications, so two debates were held on successive nights instead of one, and a lottery determined who got which night. Whoop-de-doo. Democrats are treating their field more fairly than the Republicans did in 2015. That should go a long way to winning in 2020, don’t you think?

And the real crime is, the Democrats are letting the cable news networks run the damn things. Did you see those sets for the debates? They were so busy with flashy backgrounds and gleaming podiums they looked like, yes, a goddamned game show. They weren’t debating. They were competing. It’s got to stop.

Here’s an idea. How about Tom Perez, Chairman of the Democratic National Committee, calls together the 20 or so men and women who say they want to run for the nomination of the Democratic Party for president. He should sit them down and ask them a simple question: what are we doing here? Are we burnishing our brands and stroking our egos, or are we trying to run Donald Trump out of the goddamned White House? Nobody is going to remember in November of 2020 what the rules were for the 2019 Democratic debates. Nobody is going to give a flying fuck how “fair” we were. All they’re going to be thinking about is one thing: beating Donald Trump. Saving this country. It’s about time for some of you to bite the bullet and decide what you care about more: your brand, or your country.

Where is it written that the cable networks should hold the debates? How about the Democrats hold their own debates? What if the Democratic Party named its own moderators — say, several distinguished professors from prominent colleges — and the Democratic National Committee comes up with a list of questions the moderators could choose from. Hold the next few debates in large venues in front of thousands of voters. Invite the news networks to cover them. Erect a platform for their cameras, and let them treat the debates as the news events they are. The cable networks could cover them live if they wanted, or run them anytime they wanted on tape, or run excerpts from the debates on their news shows. Set up a spin-room for their correspondents to wring more news from the event, and let their pundits beat their gums as long as they want doing “analysis.”

Whatever you do, please don’t let Jake Tapper and Chris Mathews and Dana Bash and Andrea Mitchell sit there and play “gotcha” with their down-in-the-weeds questions that have left everyone, including policy wonks, wondering what the hell the candidates were talking about.

Get rid of the game-show sets. Put the candidates behind simple T-shaped wooden lecterns. Line up 10 or 12 American flags behind them and turn on the stage lights. Play up the patriotism. Play down the whiz-bang and the gimmicks.

Make new rules to put some limits on who gets up there. Who the hell is this John Delaney guy, anyay?  Marianne Williamson and her feel-good self-help ministrations about “love” don’t belong on the stage. The same goes for some of the other minor candidates who are said to be working on burnishing their “brands.” I don’t care about the size of Tom Steyer’s or Andrew Yang’s egos or brands. Neither of them has a smidgen of a chance to be nominated. If they want to push their ideas, let them spend their big bucks and buy some ad time.

Hold a meeting of the Democratic National Committee and set some reasonable qualifications for the next debate and each one thereafter. Two percent in the polls is going to put eight candidates on the stage, and according to recent estimates, the number could climb to ten by the time the debate is held in early September. l That’s too many. Do we want to beat Trump, or do we want to be remembered for how wonderfully we treated all our presidential primary candidates?

Somebody in the Democratic Party needs to show some leadership and take charge of this campaign. If Tom Perez isn’t willing, then Barrack Obama should call the candidates together and ask most of them to do what’s best for the party and for the country. We don’t need 10 candidates debating in September of 2019. We need to beat Donald Trump in November of 2020.