How to build a clock that detects gravity 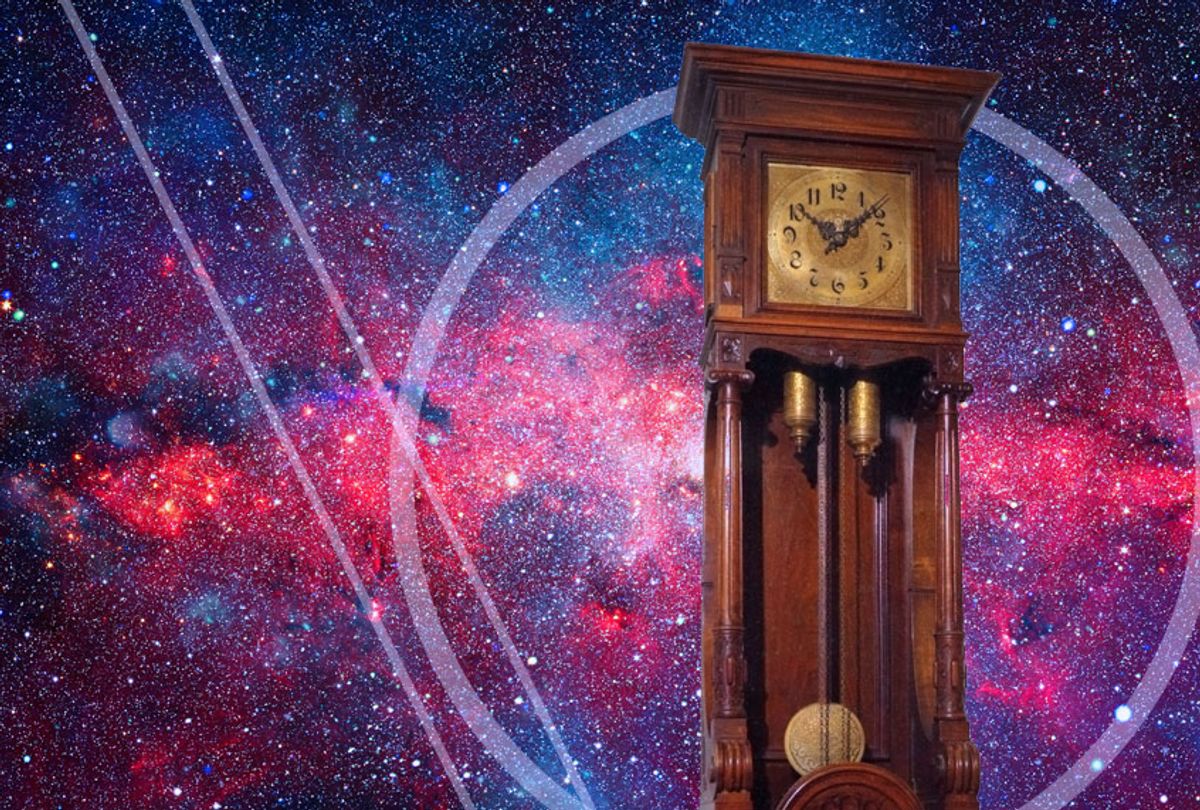 At Tokyo University, Katori Hidetoshi is building clocks that demonstrate Einstein’s idea that space-time warps near massive objects. The atomic lattice clock: an instrument accurate to within a second of the birth of the universe.

Katori’s clocks are housed like animals in cages; like the menagerie in a mechanical zoo. Each zone’s air has its own taste; its own music, the base thrum of its cooling systems. In a single clock, there are trellised black cords vaulting between breadboards, a small colony of blue lasers, an oven where the strontium atoms were trapped. Inside the porthole window, which was the size of a human heart, a violet blue haze: strontium atoms, fluorescing.

The day I met Katori, he was wearing wire rimmed spectacles, a cream knitted waistcoat over a pin-striped shirt, jeans, and trendy New Balance trainers. I noticed the trainers as I bowed. I studied them for some time.

Inside Katori’s office a print of Salvador Dalí’s "The Persistence of Memory" hung opposite the door: pocket watches drooping – one over a withered branch, another over a block of stone, and a third over skin-covered bone. A fourth watch faced downward, spattered with jet-black ants. Katori gestured toward a round table, where we sat. His secretary poured tea from a Royal Albert porcelain service.

I had brought a diagram of a caesium fountain clock (also known as ‘the single ion clock’), the instrument that is still used for setting the international definition of time: the ‘second’ is currently defined as the time it takes for a caesium atom to move between two energy levels. But caesium fountain clocks rely on a technology that dates back to the 1950s. Even the best fountain clocks are slower, and far less accurate, than the optical lattice clocks Katori is building.

Katori frowned at my diagram.

“In the abstract, the single ion clock is excellent, but in reality, it takes ten days to tell the time.” Katori paused, delicately, raising his eyebrows. “That’s not so impressive. But when we can measure relativistic time within a minute, then we can feel time as it is actually happening, not ten days later. With optical lattice clocks, I get millions of atoms ready, and I measure them in a single second.”

Katori seemed to feel that question made no sense; I had to repeat it several times. “But I want to surpass old technologies! I’ve never wanted to chase somebody else’s ideas.”

Katori twisted around to look at "The Persistence of Memory." “We’re on the brink of realizing Dalí’s vision.”

I glanced up at "The Persistence of Memory": eroded escarpments, barren plain, ants swarming over a watch’s case. The watch’s face, if the watch even had a face, was invisible.

“The way those clocks droop is sinister. They don’t scare you?”

Katori laughed. “No! I want people to have a new way of seeing reality. Right now nobody cares about relativity: only scientists understand how gravity can change time and space. My dream is to change that, to make everyone understand Einstein’s concept of time.”

“How would you do that?”

“If you put two of my clocks, far apart from each other, and something heavy moves, the two clocks could detect it — ”

“ — because the clock nearer the heavy thing would run slower —”

“Yes! Or think about the magma chamber under Mount Fuji: if lava moved, my clock could see what was happening. It’s like how radar works, but in this case, we are observing disturbances, the distortions, of space-time.”

I glanced back at Dalí’s print.

“So in the future, one of the two clocks would be able to tell time before things happen; but yet, that clock would still be a clock, just… not a clock… of the present moment…”

Katori grinned. “I want to put my clocks in gas stations, and in antennae for mobile phones…”

An invisible web stretching like ganglia all over Japan, over Asia, the world. The clock would become one vast organism, something almost alive.

Anna Sherman was born and raised in Little Rock, Arkansas. She studied Greek and Latin at Wellesley College and Lincoln College, Oxford. She worked as an editor at Millennium Journal of International Studies, Financial Times Energy, and then, after moving to Asia in 2001, for Hong Kong University Press and other imprints in Hong Kong and Tokyo. Her new book, "The Bells of Old Tokyo: Meditations on Time and a City," is to be released from Picador on August 13th, 2019.