"Those who perished in Toledo," he said, referring to a city 134 miles away from Dayton, where the shooting occured 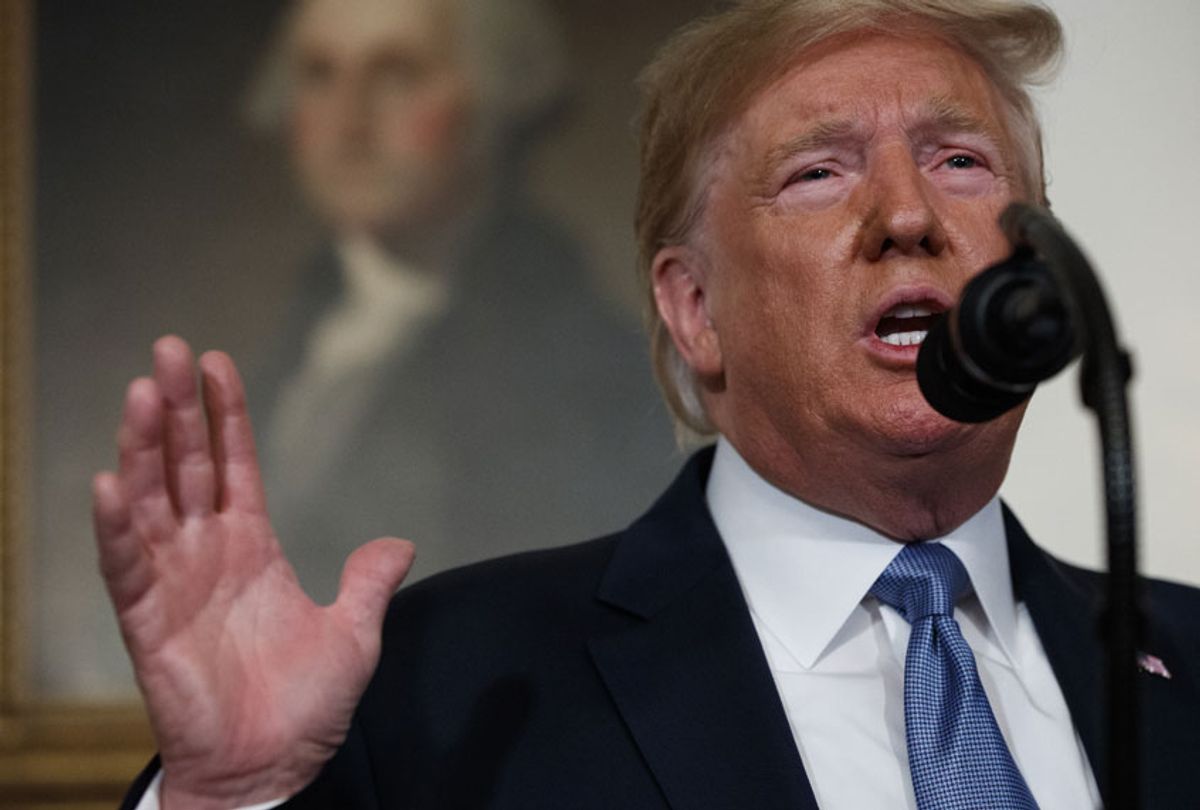 President Donald Trump speaks about the mass shootings in El Paso, Texas and Dayton, Ohio, in the Diplomatic Reception Room of the White House, Monday, Aug. 5, 2019, in Washington. (AP/Evan Vucci)
--

President Donald Trump addressed the nation for roughly nine minutes on Monday after two mass shootings in Texas and Ohio, which left at least 29 people dead and 53 injured over the weekend.

As the country reeled once again from devastating scenes of gun violence and death, the president demanded that "sinister ideologies" be defeated and condemned "racism, bigotry and white supremacy."

"Hatred warps the mind, ravages the heart and devours the soul," Trump said in a nationally-televised address from the White House.

But, in his first address to the nation following the pair of horrific mass shootings over the weekend, the president mistakenly named the wrong city in Ohio.

In a transcript of Trump's remarks released by the White House later Monday, the president's reference to "Toledo" was crossed out.

"Toledo. Fck me," Democratic Rep. Tim Ryan of Ohio, who is vying to take on Trump in 2020, tweeted in response to the president's remarks.

In a statement shared to Twitter, Toledo Mayor Wade Kapszukiewicz, a Democrat, said that it is "pretty obvious" that Trump misspoke, adding that he prays that "leaders in Washington finally summon the courage to stop the senseless mass slaughter that continues to occur in our country."

"We remain the only country on Planet Earth where mass shootings continue to happen on a regular basis. This doesn't happen frequently in other parts of the world," the mayor added. "Why do we allow it to happen here?"

Former Vice President Joe Biden, who is also running to challenge Trump in 2020, made a similar mistake when speaking out about the shootings on Sunday night. He incorrectly referred to "tragic events" in Houston and Michigan before correcting himself.

Trump's Monday remarks came after mass shootings rocked the nation for the second weekend in a row. The first of the two weekend shootings occurred Saturday afternoon when a gunman opened fire at a Walmart in El Paso, Texas, leaving 20 people dead and 26 injured. Less than 13 hours later, another shooter attacked a crowd outside a bar in Dayton, Ohio, killing 9 people and injuring 27.

Federal prosecutors are treating the El Paso massacre as a case of domestic terrorism.

Trump on Monday also called for Congress to pass "red flag laws," which would focus on better identifying mentally-ill people who should not be allowed to purchase firearms. Democrats are likely to call for more expansive gun control measures.

"Mental illness and hatred pulls the trigger — not the gun," Trump said.

The president also called for cultural changes, including stopping the "glorification of violence in our society" in video games and elsewhere, adding that the Internet provides a "dangerous avenue to radicalize disturbed minds."

"The Internet, likewise, is used for human-trafficking, illegal drug distribution and so many other heinous crimes," Trump added. "The perils of the Internet and social media cannot be ignored, and they will not be ignored."

Earlier on Monday, the president wrote on Twitter that lawmakers must "come together and get strong background checks" and suggested combining such legislation with "desperately needed immigration reform." Trump did not elaborate on his call for stronger background checks during his televised remarks.