We are exhausted: Yet another TV series faces claims of sexual harassment, assault and racism 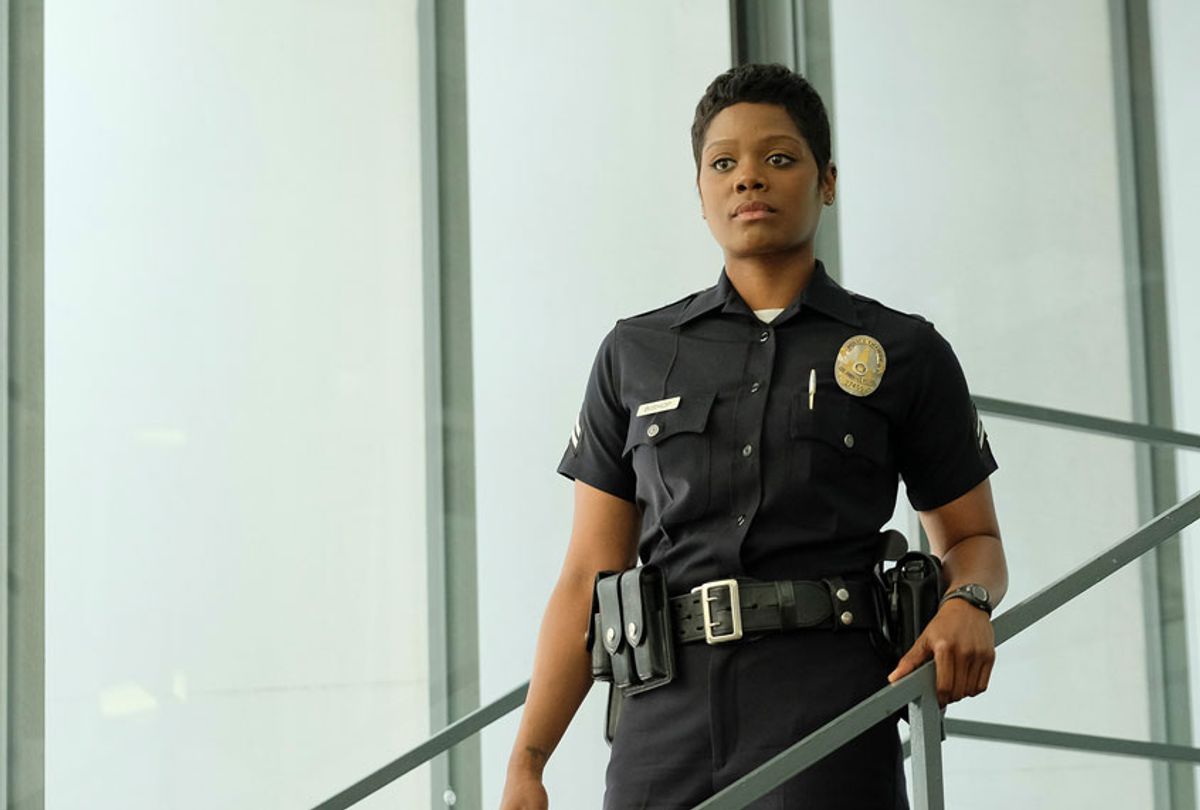 Afton Williamson in "The Rookie" (ABC)
--

Please appreciate how tiring it is right now for people in marginalized communities to get through the day with their collective sanity intact. A huge chunk of the population feels like this, but recognize how uniquely draining the world is right now for women of color, LGBTQ people, immigrants and children of immigrants.

And it’s not merely the directed threats of violence hanging in the air, as thick as late summer humidity. The sad fact is that many of us were raised to be aware that in public spaces and even some private ones, our bodies are targets.

But now this vitriol is a loud, constant drumbeat with us at all times. It’s there when we shop for groceries, when we walk down the sidewalk. It’s also in our homes, our supposed safe spaces, because it has always been in our escapism. Keeping up with nearly every popular mainstream film and TV series asks us to compromise some part of ourselves...the more we think about it, that is.

As such, most of us choose not to ponder the racially and culturally problematic storylines or casting in most TV shows. If we did, we wouldn’t be left with much of anything to watch, since nearly every TV series contains such flaws. But some are impossible to ignore, especially  when the sudden  disappearance of a major co-star calls attention to the notion that something might be wrong.

On Sunday Afton Williamson, a co-star on ABC’s Nathan Fillion vehicle “The Rookie,” announced her departure from the series on her verified Instagram account, explaining that she quit due to claims of sexual harassment and racial discrimination at the hands of multiple parties, including the head of the series’ hair department.

Her character Talia Bishop, the training officer to series star Fillion’s John Nolan, is part of the central ensemble. Therefore regular viewers are sure to notice her absence in season 2.

Only a few years ago Williamson’s disappearance from “The Rookie” might have escaped significant coverage, aside from outlets dutifully reporting the official network version of her exit and perhaps a few fans who might have started to notice longer gaps between this job and subsequent ones on her resume. So, please understand that this may be why she decided to get ahead of any potential whisper campaigns or corporate spin about her sudden disappearance from the ABC cop show.

“Throughout the filming of the pilot, I experienced Racial Discrimination/Racially Charged inappropriate comments from the hair department and bullying from Executive Producers,” Williamson claims in her Instagram post. “During the Season, it continued along with Sexual Harassment from a recurring guest star and the racist commentary & bullying from the Hair Dept. Head escalated into Sexual Assault at our Wrap party.”

Williamson said she reported the harassment to “Rookie” showrunner Alexi Hawley, who worked on the final season of Fillion’s previous ABC hit “Castle,” and it eventually became clear to hear that Hawley never passed her complaints to human resources.

According to her account, the head of the production’s hair department was fired only after the alleged assault, even though the employee demonstrated what Williamson describes as “outward racism/racially charged language and bullying behavior in and out of the Hair and Makeup trailer.”

“The only time I was asked to participate in an investigation was after a meeting I called in June following our Season 2 announcement,” the actor said. “This meeting included the Showrunner and two other producers as well as my agent and SAG-AFTRA Union Rep. It was clear to all present in the meeting that the Showrunner had not shared my reports with ... any of the producers.”

Williamson also says that in the end, although she was assured that the recurring guest star who harassed her would be fired, Hawley said he admitted to her that the unnamed actor had not been fired and that he had not taken her complaints to human resources.

By the time season 2 had begun filming, she said, the promised investigation had not even started. So she walked. Williamson bio is already gone from ABC’s press site and Entertainment One, the lead studio on the production, says it has launched and has an ongoing investigation into Williamson's claims.

At this point it must be stressed that this is all hearsay. On Monday morning at Television Critics Association press conference, ABC Entertainment President Karey Burke stressed that the investigation is ongoing and that she only became aware of Williamson’s allegations at the end of June, but would not comment beyond that.

“I can trust the investigation because it's being done by an independent hired party. I’m hopeful that those results will be independent and trustworthy,” Burke told assembled reporters. “At that time, those answers and those conclusions will help guide us about how to handle those situations in the future, if in fact there has been some sort of communication breakdown. ”

One draining fact of life women of color contend with is knowing that they are more likely than their white peers to be tarnished by rumors that risk their future employability if they report harassment or even speak up about adverse working environments to their bosses. In Hollywood that almost always translates to a slowdown of work.

Williamson is a black actor who has been steadily employed on TV over the last decade. "The Rookie" was her first series regular role. She’s well aware of the extra risk that comes with going public with these allegations on a show run by and starring a pair of men who have more power in this industry to effectively sideline or end her a career. Fillion has an executive producer credit on “The Rookie,” by the way, although as yet he’s made no public comment about this matter.

But to some viewers who take comfort in the drama's outward appearance of diversity, Williamson's story breaks any spell of its perception as a blameless hour-long escape hatch.

And the more you think about her allegations, the angrier you might get — especially black women who have navigated a lifetime of squeamish reminders that their hair and bodies are objects of curiosity, fetishizing and denigration.

This is especially true for women having to explain for what seems like the millionth time that they understand why Williamson didn’t go directly to human resources to report her harassment, and why doing so is especially perilous for black women in any industry.

They might explain that a woman of color raising her voice to power opens her up to a higher risk of being dismissed as not only hard to work with, but outright crazy by people with official titles who have far more power than you, who are usually white men. The very same people whom marginalized employees rely upon to stand with them, to use that power to help our calls for justice and safety to be heard and taken seriously.

Even then, we have to explain why Williamson didn’t simply gut it out to get a settlement, like $9.5 million payout like Eliza Dushku negotiated for being fired from CBS’s “Bull” after reporting sexual harassment at the hands of star Michael Weatherly. We have to further explain that Williamson likely had far fewer career opportunities and many, many more hoops to jump through than Dushku, to even land a regular series role like this on a major network.

But although Dushku is considered a name in the TV business, even she was not immune to harassment that was enabled and co-signed by the showrunner of the series she was slated to join as a series regular. Even she acknowledges that Weatherly would have gotten away with his harassment entirely if his behavior hadn’t been caught on tape that CBS lawyers inadvertently shared with her legal counsel.

“Reflecting on the whole ordeal, it often makes me think with sadness of the majority of victims who do not have the benefit of the fortunate evidence — the tapes that I had,” Dushku wrote in the December 2018 Boston Globe opinion piece in which she went public about her ordeal.

As far as we know Williamson does not have the same dead-to-rights evidence, or else she probably wouldn’t have told her account via Instagram with zero guarantee of recompense. After all, despite Dushku’s widely-publicized account of  harassment and retaliation, a new season of “Bull” is returning in a few weeks. And CBS is having Weatherly and the man who fired her, “Bull” showrunner Glenn Gordon Caron, undergo “leadership training.” That’s the extent of their penalty.

When asked on Aug. 1 what makes “Bull” such a valuable show that it’s worth continuing despite this situation, CBS entertainment president Kelly Kahl told reporters, “Michael is loved by our audience. And even after these allegations came out, people continued to watch. So it’s a popular show that we want to keep on our air, and it’s a very good show as well.”

Please remember that the “Roseanne” reboot was ABC’s most popular series in many years, and execs took it off the air after its troublesome star made a racist remark. That was the right thing to do. So how will ABC’s executives, now reacting to a black woman’s allegations of being subjected to racist verbal abuse and sexual assault for a full year without a guarantee of or hope for recourse? Season 1 of “The Rookie” averaged less than 4.2 million viewers.

Depending on the results of eOne’s investigation, how will a network square continuing to air a series under such a cloud on the same schedule that includes a reboot of “Kids Say the Darndest Things” starring Tiffany Haddish, and potentially an eight-episode anthology series currently known as “Women of the Movement,” described as “a chronology of the civil rights movement as told from a black woman’s point of view”?

We have to keep asking these questions and living with the answers. It’s all so very exhausting.