Haddish, McCarthy and Moss take charge in "The Kitchen," which gleams through the grit 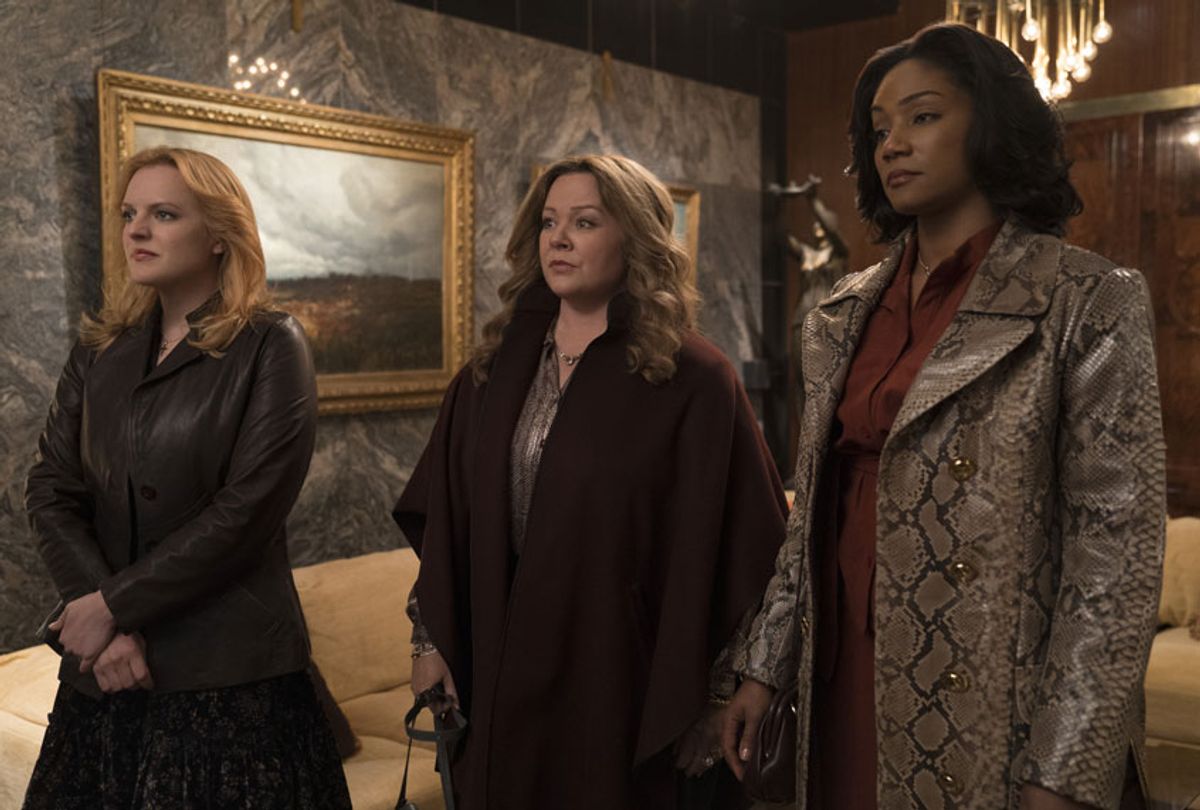 “It’s a Man’s Man’s Man’s World” plays ironically over the opening shots of “The Kitchen,” writer/director Andrea Berloff’s undemanding crowd-pleaser about a trio of female gangsters in the late 1970s. Although it is adapted from a DC Vertigo comic, watching how these women take over the Hell’s Kitchen section of New York and become empowered in the process, one wishes it was based on a true story.

The song sets the mood as the three protagonists are introduced and defined by the issues — and men — that they will overcome over the course of this briskly entertaining film. Kathy (Melissa McCarthy) is a mother of two, married to Jimmy (Brian d’Arcy James) who takes her for granted. Ruby (Tiffany Haddish) is the “lazy” wife of Kevin (James Badge Dale), whose powerful mother (Margo Martindale) does not like her. And Claire (Elisabeth Moss) is the abused spouse of Rob (Jeremy Bobb).

When the three husbands are sent to prison for multiple crimes, the women are told “not to react.” However, Claire cannot suppress a smile at being free from her husband for three years. Viewers will likely be smiling too because it is easy to root for these women.

Alas, while Ruby, Kathy, and Claire are told by crime boss Little Jackie (Myk Watford) that they will be taken care of, when they don’t get enough money to pay the rent or feed their kids — and jobs are scarce for these women with no degrees — they decide to take matters into their own hands. In talking to mostly female business owners, they learn that the neighborhood protection money being paid to Little Jackie isn’t really buying anything.

So Ruby, Kathy and Claire use their smarts to provide the necessary services and earn some income. Cut to a montage of money coming in and the women dancing at a night club. Berloff (who also co-wrote "Straight Outta Compton") films these and other scenes in the style of the genre, but she only alludes to other women-centric crime films, never copying them. This approach helps “The Kitchen” go down smoothly as it nods to fare like “Coffy” (minus the Blaxploitation) or “Gloria” without feeling like a rip-off. It is enjoyable to just lean into the '70s vibe, with split screens and shots of 42nd Street marquees, and not be distracted by playing “guess the homage.”

Another reason for the film’s success is that both Haddish and McCarthy, who can bulldoze their way through comedies, deliver nicely restrained dramatic performances. Haddish is fantastic as Ruby, who doesn’t say anything she can’t back up. Watching her handle herself is a thing of beauty; she oozes confidence and sass. And she was born to wear her character’s period costumes. Likewise, McCarthy infuses Kathy with heart as the film’s moral center. Moss may be saddled with the weakest role, and while Claire does get a bit too giddy brandishing a gun, Moss is infectious regardless. In support, Margo Martindale chews the scenery with élan.

Viewers come to care about the three protagonists; they even achieve a surprising poignancy at times. When Ruby has a cup of tea with her mother, who tells her why she “beat the soft” out of her, it is oddly gratifying. Likewise, when Kathy tries to gain her father’s approval, or stand up to him, there is a real friction in their relationship.

“The Kitchen” also features moments of dark humor. Claire’s transformation from mousy victim to gun-toting gangster overnight may strain credulity, but it is rewarding to see her fend off a harasser on the street. Moreover, Claire gets a romantic partner in Gabriel (Domhnall Gleeson), who saves her from an assault, and later teaches her how to carve up a dead body and dispose of it in the Hudson River. Their relationship is actually quite sweet.

“The Kitchen” delivers because it goes right up to the line and pulls back before crossing it. Berloff shows considerable blood being spilled in the film, but despite a high body count, the violence never feels gratuitous.

It is telling when Claire beats herself up for not being able to defend herself against an attacker, but to counterbalance that vulnerable moment, there are references to Gloria Steinem, and a remark about women being able to use their looks in some cases to get what they want. As Ruby, Kathy, and Claire gain some respect and a sense of self-worth, they each start dressing better. Berloff may go broad with the feminism, but that does not make the points any less important or worthwhile. When Claire gets the not-unexpected opportunity to stand up to her abusive husband, viewers will likely break out in applause. Even ideas about motherhood versus “working women” are aired, albeit bluntly. In fact, Jimmy’s fragile male ego factors into the plot although his and Kathy’s kids are used largely as pawns to make a point.

But the film’s transparent moments can be forgiven because there are some nifty twists — and at least one curve ball thrown in — as various crosses and double-crosses occur. If the first half of “The Kitchen” depicts the women’s rise, the second half shows how they maintain their pole position. While, Ruby, Kathy and Claire demonstrate their moxie in a meeting with a Brooklyn gangster (a scene-stealing Bill Camp) whose turf they invaded, they also must contend with their husbands getting out of jail and the FBI agents (Common, and E.J. Bonilla) who are taking an interest in the ladies’ criminal activities.

Tensions rise, hard choices have to be made, and hits are put out, all requiring some serious negotiations as well as a consideration of the value of what all this effort is worth. As these determined women grapple with a series of sticky situations that test their sisterhood, “The Kitchen” is not unlike an episode of TV’s “Claws.” It can’t stop to think too hard about any of its serious issues — and neither should viewers.

“The Kitchen” is also buoyed by a fabulous soundtrack of upbeat ‘70s songs that keep the film's feel-good vibe going even when someone is being violently murdered. Berloff’s film isn’t subtle, but it sure is fun.