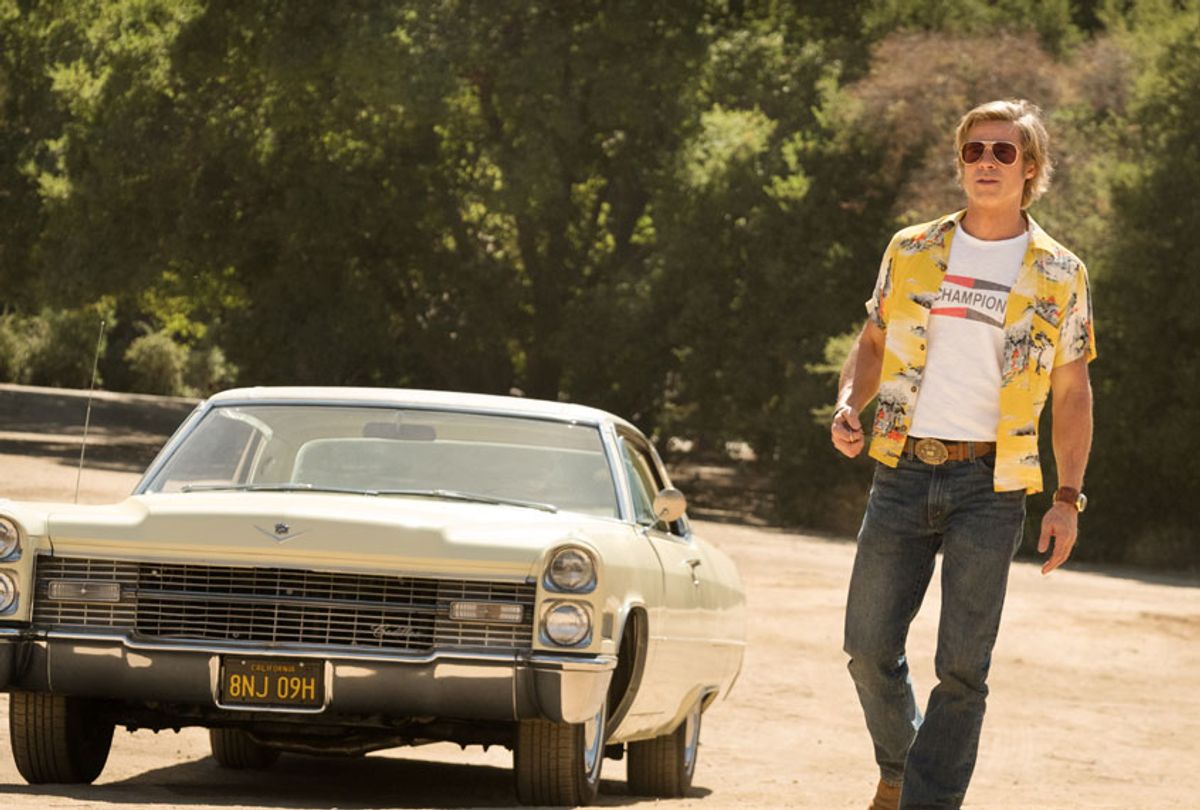 Brad Pitt in "Once Upon a Time in Hollywood" (Andrew Cooper)
--

The “Once Upon a Time in Hollywood” Bruce Lee fight scene may be getting all of the attention in the wake of the film’s release, but another scene in Tarantino’s latest almost caused a similar level of controversy. One of Tarantino’s biggest set-pieces in “Hollywood” takes place at the Spahn ranch, a former production location for many Westerns that served as the home for the Manson Family cult in 1969. Brad Pitt’s stuntman Cliff Booth visits the ranch after driving the hitchhiker Pussycat (Margaret Qualley) home. Cliff intends to say hello to ranch owner George Spahn (Bruce Dern), an old friend from the movie business, but Pussycat and the Manson Family complicate what should be a simple reintroduction.

In an interview with HuffPo, “Once Upon a Time in Hollywood” production designer Barbara Ling reveals that rebuilding the Manson Family caused some panic among Los Angeles area locals. “They thought it was going to be a movie about the Manson Family,” Ling said. “There was pushback to the [Los Angeles Department of Recreation and Parks], and the park came back and said, ‘Stop. This is just one set of a Tarantino movie.’”

Veteran supervising location manager Rick Schuler previously told Los Angeles Magazine that the “Hollywood” production team rebuilt the Manson Family compound as close to the original location of the ranch as possible. Per Ling, the close proximity of the fake Manson compound to the real Manson compound led many locals with memories of 1969 to have worries about the production.

Read more IndieWire: 'Once Upon a Time in Hollywood': Why the Brad Pitt and Bruce Lee Fight Is Confusing Moviegoers

“We had originally hoped to film at the site of the real Spahn Movie Ranch in Chatsworth, but the property had been completely bulldozed over as if to eradicate it from history,” Schuler said. “Just down the road, however, was the site of the old Corriganville Movie Ranch, now a public park. Like the Spahn Ranch, it had once featured a Western-themed set. The lay of the land afforded our incredible production designer Barbara Ling a chance to position the house of George Spahn (played by Bruce Dern) on a hill at the end of a road near the Santa Susana boulders, helping set up tension for a scene.”

Read more IndieWire: Casey Affleck Speaks Out: 'It Scares Me' to Talk About #MeToo Movement

The locals’ pushback to recreating the Manson Family ranch is certainly warranted. Many moviegoers had similar worries when it was revealed Tarantino would be taking on the Manson murders in his new movie. The director told IndieWire before production that his film would not be about the Manson Family but about 1969 as a whole, which turned out to be the case. The Spahn ranch is only featured in the one scene in “Once Upon a Time in Hollywood.” The film is now playing nationwide.

Read more IndieWire: Burt Reynolds Wrote the Best Insult in 'Once Upon a Time in Hollywood' Bruce Lee Fight Scene