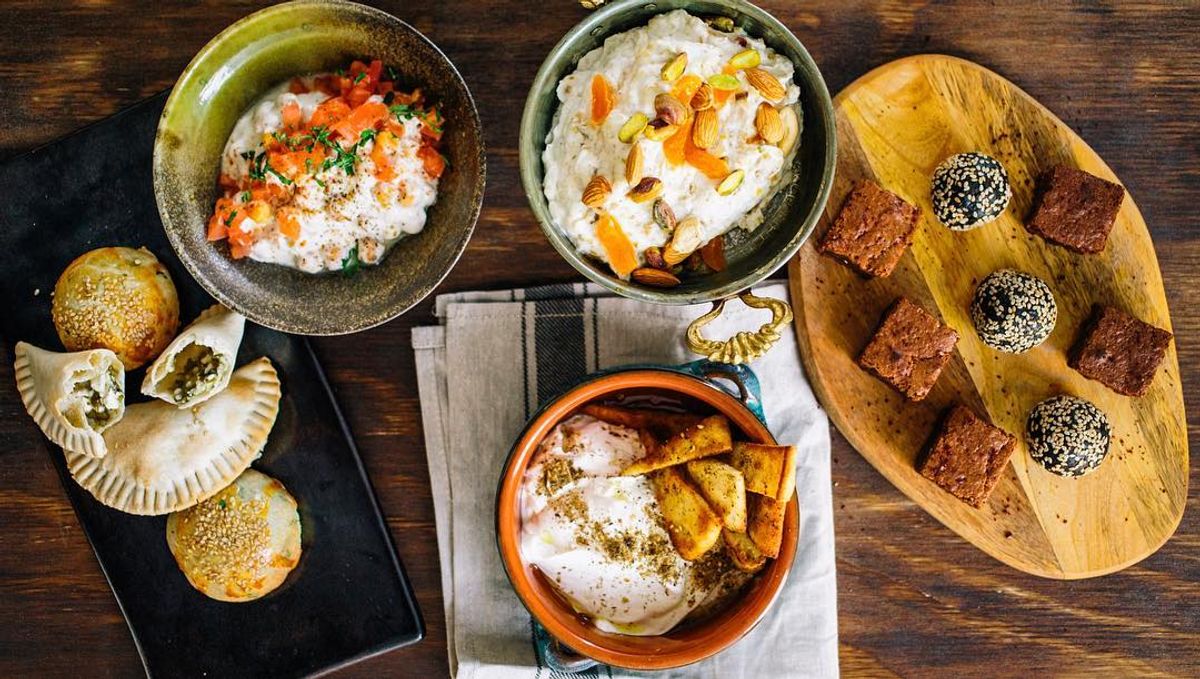 When I visited the Eat Offbeat HQ in a commercial kitchen in Long Island City earlier this summer, tensions were understandably high: everyone was on edge about rumored ICE raids. But it was a busy day, and the catering company was preparing thousands of samosas for an evening event. The smell of them frying was enveloping. Chef Nasrin Rejali, who is from Iran and lives in Jamaica, Queens, still had a few minutes to chat and share her signature baklava cupcakes. They were scented with saffron and cardamom and topped with a crunchy layer of slivered nuts.

"People hear all kinds of things about Iran, and they're mostly pretty bad," she said. "But I can share my food, which is good, which is love."

In Iran, Rejali ran a buffet restaurant that was part of a Tehran gym. But she can’t remember a time she didn’t gravitate towards the kitchen. She’s been cooking since she was a little girl, and all these years later — Rejali has been living in the US since 2014, along with her four children — she loves “all of it, from chopping the onions to frying the onions to sharing the food.” Her signature dish is Chicken Fesenjan, slow-stewed chicken with walnut, pomegranate molasses, and saffron. It’s one of Eat Offbeat’s most requested items.

When Eat Offbeat founder Manal Kahi arrived in New York City from Lebanon to study environmental and international affairs at Columbia, she couldn’t find good hummus anywhere. She was deeply disappointed by what the grocery store had to offer.

“I called my grandmother for her recipe,” Kahi remembers. “I would bring it to parties, and it always got rave reviews.” Her grandmother is from Aleppo, and her hummus became a symbol of what Kahi missed. “It was natural to make a connection to Syrian refugees. There are a lot of Syrian refugees resettled here; they likely make good hummus for their families, and they would probably enjoy sharing that recipe with New Yorkers.”

Eat Offbeat was born. Today, the company goes way beyond hummus. Eat Offbeat employs resettled refugees from Syria, Iraq, Senegal, Afghanistan, Eritrea and beyond to cook the food they grew up with, from Iraqi sumac salad to Nepali momos. "I speak five languages, but it's not enough," says Kahi. The kitchen is full of a lot of languages (at last count, 12) and a lot of flavors —they serve authentic meals that are entirely conceived of, prepared, and delivered by refugees resettled here in New York City.

The dishes include Chef Mariama’s Senegalese Chicken Yassa, slow-cooked with mustard, caramelized onions and green olives. There are those veggie samosas, stuffed with potato, masala, and cilantro, the brainchild of Afghani Chef Bashir. Chef Dhuha, who is from Iraq, makes rich spiced date truffles dipped in coconut flakes. And then there are Rejali’a addictive baklava.

In Kahi’s words: “We hire talented home cooks who happen to be refugees by status, we train them to become professional chefs, then we deliver their food to groups of people all over the city.” Corporate lunches and private parties in New York make up the bulk of the company’s business, but they are primed to grow. Earlier this summer, four of their chefs paired with the restaurants ABCV, Porsena, Il Buco, and Lalito in New York to host popup tasting dinners as part of New York’s Refugee Food Festival. In February, they will publish a cookbook featuring their signature recipes.

Early on, Kahi partnered with the IRC (International Rescue Committee), which supports refugees and displaced people around the world. The IRC introduced her to people who had recently resettled and were looking for work. They had to love food and cooking, but professional cooking experience was not a requirement.

Kahi would ask potential employees to bring her a dish they liked to prepare. One cook brought in food from a street vendor. The candidate misunderstood the assignment, but she had excellent taste. She was hired.

Later, Kahi brought on Juan Suarez de Lezo, a Spanish chef who cooked at El Bulli and Per Se, to oversee the kitchen. He helps with training, menu design, and executing dishes on scales from intimate dinner parties to giant corporate bashes.

Eat Offbeat makes a huge impact on a small group of people. It offers more than a well-paid job, more than training and opportunities. A job with Eat Offbeat entails pride and a real sense of agency, an especially powerful thing for people who have been forced to leave their countries.

For some cooks, it’s a place to find their feet in a new country before moving on to their own projects. Syrian Chef Diaa Alhanoune owned restaurants in Syria, Sudan, and Jordan before coming to New York. He cooked at Eat Offbeat before opening his own spot in south Williamsburg called Sakib earlier this year. The Eat Offbeat crew was there to cheer him on (and help wash windows) on opening night.

As for Kahi, she didn’t come to New York with food dreams. “I had never even been in a walk-in fridge before,” she says. But she’s not looking back. The world of food has become her home.

That’s what food is for — to bring us together. It’s a cliché, but it’s never been more important than in a time of ICE raids and anti-immigrant fearmongering. A meal from Eat Offbeat is first totally high quality, crave-able food. Second, it’s cooked with a lot of love from refugees. Our city is way more delicious, rich, and strong because of them.