New deal could force Central American refugees to stop long before they reach the U.S. border 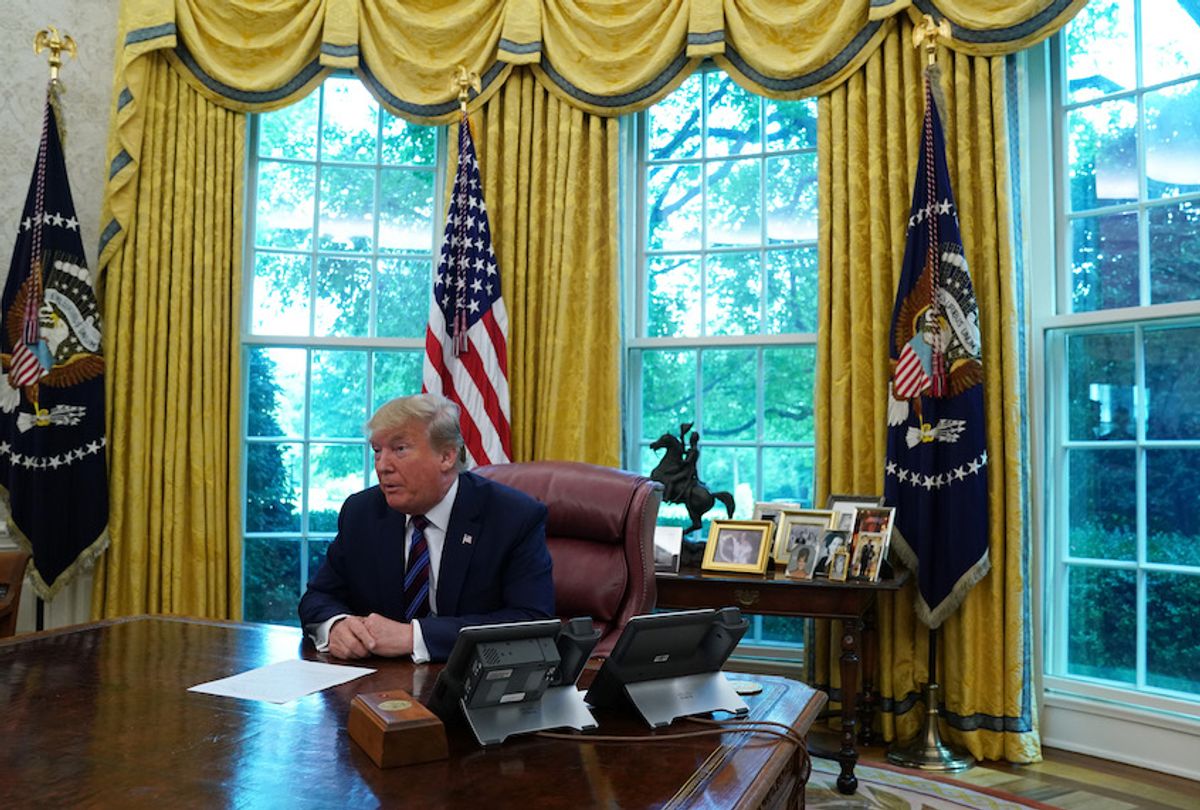 U.S. President Donald Trump speaks to members of the press during a signing of a “safe third country” agreement in the Oval Office of the White House July 26, 2019 in Washington, DC. (Alex Wong/Getty Images)
--

Two weeks after signing a hurry-up deal with Guatemala to siphon off thousands of asylum seekers at the U.S. border from El Salvador and Honduras, no one still quite knows how the systems are supposed to work now.

It was a “deal” in which Donald Trump figuratively held an economic gun to the head of President Jimmy Morales of Guatemala to declare the nation a “safe third country,” making it possible to require migrants passing through Guatemala toward the United States to make their asylum request to Guatemala instead. It also makes it easier for U.S. authorities to deport those who came through Guatemala to that country immediately.

So, it is pretty clear what the United States got in the deal, but from what has been made public, what Guatemala got was a reprieve from a travel ban, on tariffs and a trade snub or unrelated harsh terms on allowing immigrants from Guatemala from sending home money.

In other words, the United States was the bully here.

But what Guatemala also got was a huge headache. No one knows what the processes would involve for accepting returning migrants, or the pace of deportations that can be supported, or how exactly the transportation and housing for returnees would work, especially if they are being returned not to their home country. How to keep them safe would be another unanswered question.

Last year, Guatemala granted 257 asylum requests, per The New York Times. Now they will have tens of thousands of applicants for asylum. Not surprisingly, they have no infrastructure in place to handle that kind of wild increase.

These “safe third country agreements” are rare. We have one with Canada, but that’s about it. The European Union has one with Turkey. The deal, which still must be ratified by a reluctant Guatemalan legislature, would make asylum seekers ineligible for protection in the United States if they had traveled through Guatemala and did not first apply for asylum there. Under the agreement, the American authorities would be allowed to return those migrants to Guatemala, relieving pressure on the American immigration system. Guatemalan and Mexican asylum seekers, however, would not be affected.

The Times has found that “It appears that no such agreement has been signed with a nation that is as ill-equipped as Guatemala to deal with asylum seekers and keep them safe, experts say. Though homicide rates there have fallen sharply in the last decade, the country remains among the deadliest in the world. Crime, impunity and corruption are rife, and critics argue that it is unable to meet the safety requirements demanded by the deal.” Our U.S. State Department has issued alerts about rampant violence and lousy law enforcement.

The Times found a draft plan circulating among American officials which suggests that initially a limited number of migrants would be sent to Guatemala each week — perhaps several hundred in a month. That would be a tiny fraction of the tens of thousands that have been seeking asylum each month at the border with Mexico. Last year, about 62,000 people from El Salvador and Honduras petitioned for asylum in the United States, according to the United Nations. Most of them entered the country through the southwest border.

Elizabeth Oglesby, a Latin American Studies professor at the University of Arizona, says that “forcing Guatemala into this agreement will jeopardize the lives of tens of thousands of asylum seekers, destabilize Guatemala and the Central American region and drive migration rates even higher.”

She says that draft plan could even be interpreted in a way as to allow deportation there of migrants who did not pass through Guatemala, but could go there to start their process. And, she says that Guatemala is not a safe third country, and it’s ludicrous to argue that it is. Poverty, violence, organized crime and institutional corruption are among the deepest in the hemisphere. In fact, most migrants and asylum seekers who arrive at the U.S. southern border are coming from Guatemala.

This is just the latest battle in the war on migrants. The Trump administration has issued a new — and in Ogleby’s words blatantly illegal — rule declaring asylum seekers ineligible to petition for U.S. asylum if they had passed through any country on their way to the United States.

Some asylum seekers sent back to Mexico under Trump’s “Remain in Mexico” program have been reportedly raped, extorted and murdered at the hands of gangs and organized crime. In Guatemala, it would be worse. The Guatemalan state does not have even a minimal ability to provide safe and secure conditions for asylum seekers — it can’t provide those conditions for its own citizens.

Just what American values were we underscoring in the name of protecting our borders?