Where is downtown? The impact of the internet on work and workplaces in America 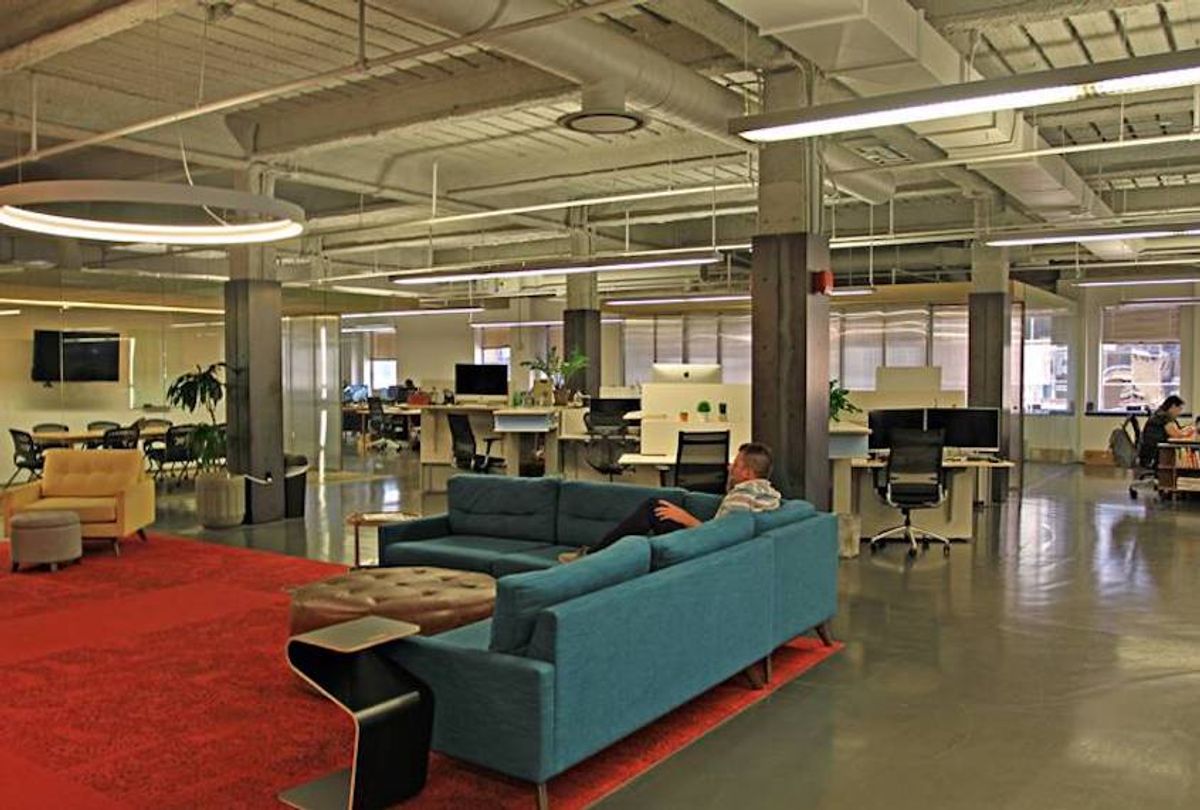 Today more than half of the workforce consists of people born after 1980. Most of them are “digital natives, collaborative, adept at multitasking and their attitudes and expectations will have a major impact on the work environment.” Personal computers and the internet allow them to work from anywhere: home, their own or somebody else’s office, a hotel room, or an internet café. This is one reason the demand for office space has been declining and the number of freelance workers growing. The increase in collaborative tools has allowed different people in different locations to work on the same document, thereby reducing the need for meeting and conference rooms.

It does not take much imagination to understand that the internet has spawned all sorts of new tech industries, many of which have eagerly located downtown. It is less obvious that changes in space utilization caused by using computers and the internet have also spawned entirely new forms of business organization. Co-working facilities, such as WeWork, are just one example of what inventive businesses have done to profit from these changes. Combining technologies, workstations, and equipment that intercommunicate in a single building is now common. One example is Amalgamated Drawing Office in Greenpoint, Brooklyn. For a monthly fee of $600, members have access to “a staffed fabrication lab with tools including 3-D printers, a laser cutter and an etching press.”39

The reverse is also true: Technological changes have made many older office buildings obsolete. In the past 20 years, developers have been purchasing them the same way they used to acquire lofts, warehouses, and multistory manufacturing for reuse as apartment buildings and hotels. Changes in technology (particularly computers and the internet) have substantially reduced the amount and character of space needed by most businesses, freeing up space in class B office structures, manufacturing lofts, and warehouses for reuse as apartment buildings. Initially, the cost of converting these quite different buildings was lower than the cost of acquiring land and building suburban one-family houses. The contemporaneous provision of new transit service rendered the cost of traveling to and from work, shopping, and leisure activities competitive with suburban alternatives.

Computer and internet use resulted in changes in office employment and a major reduction in the amount of space needed for filing, storage, and clerical activity. Accordingly, filing cabinets and filing clerks, type- writers and typists, and even address books are no longer needed, and neither is the space they occupied. In 1970 the typical U.S. office worker occupied between 500 and 700 square feet. By 2017, that number had fallen to 151 square feet.

As a result, firms needed less space per worker and could pay a higher price per square foot for the space they did occupy. However, the space they occupied had to be wired to accommodate the latest technology and provide ready access to the internet. The users of the office space were also changing. In 2018 employment in New York City’s tech industries was estimated at 120,000 (an increase of 60 percent since 2008), while it had fallen to about 180,000 in Wall Street financial and investment services. Naturally, obsolete class B office buildings with mid-20th- century wiring found it difficult to compete for tenants.

Computer and internet use has allowed small startup companies to operate within smaller offices and with much less clerical support. In response, a new form of business office emerged in 2006: co-working space. Each business membership entitles the occupant to rent office space with on-demand access to high-speed internet, printers, meeting rooms, kitchens stocked with snacks and beverages, and often couches and other places in which to take a break from work.

As of 2016, there was a total of 27 million square feet of co-working space in the United States (0.7 percent of the entire U.S. inventory of office space). Nevertheless, despite the hope that co-working facilities would alter downtown America, it represents less than 1 percent of the nation’s office space—not enough to matter. Even where startup companies are thought to have played an important role, such as in lower Manhattan, co-working facilities occupied only 1.13 percent of downtown office space.  Besides, there are too few new startup companies in the United States to have a significant impact on all downtown America:

Downtown isn’t what it used to be. In the Denver Metro Area, when you ask, “Where is downtown?” people reply, “Get on FastTracks, it’ll take you there.” When you ask people in Baltimore, they direct you to the harbor. In Cleveland, they are likely to reply, “Playhouse Square is that way; Progressive Field is in the other direction; if you want to go to University Circle, take the Redline.”

So what’s the answer to “Where’s downtown?” The answer is, “It’s a moving target.”

Alexander Garvin is the author of "The Heart of the City: Creating Vibrant Downtowns for a New Century," published by Island Press. He is currently President and CEO of AGA Public Realm Strategists, Inc., a planning and design firm in New York City that is responsible for the initial master plans for the Atlanta BeltLine, Tessera (a 700-acre new community outside Austin), and Hinton Park in Collierville, Tennessee.