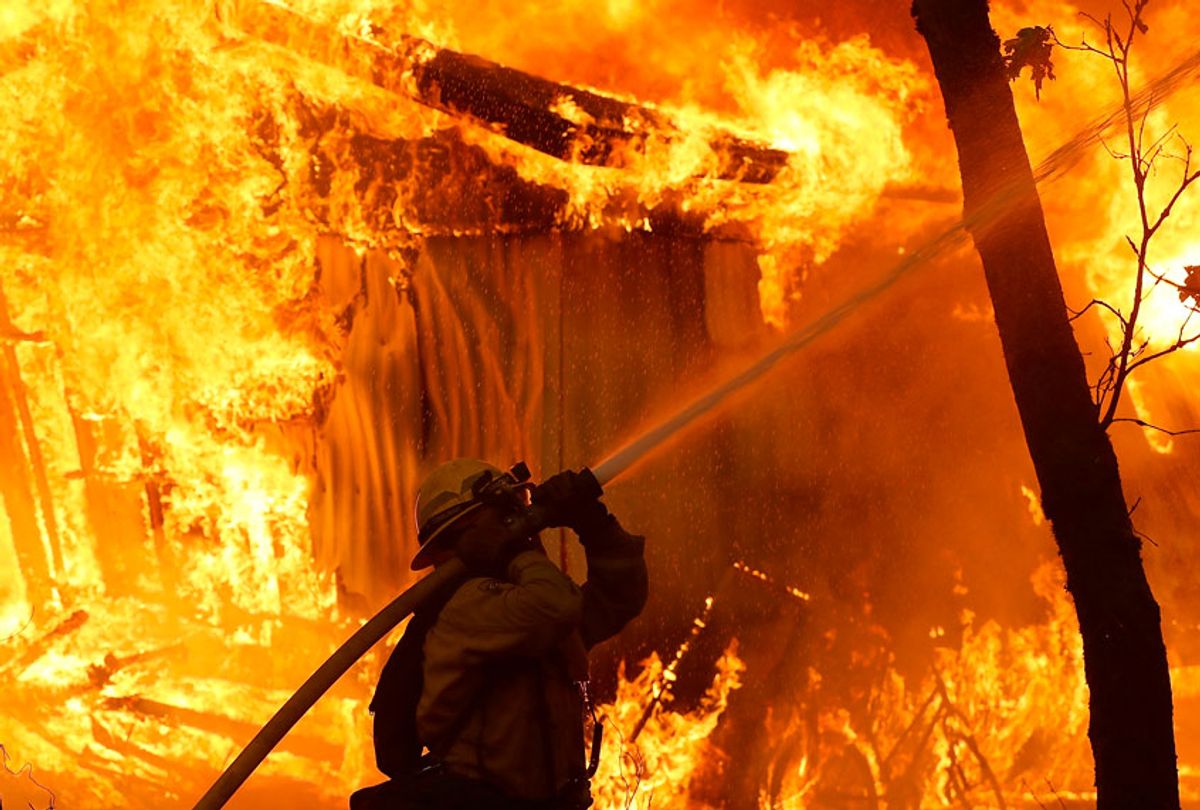 A Cal Fire firefighter monitors a burning home as the Camp Fire moves through the area on November 9, 2018 in Magalia, California. (Getty/Justin Sullivan)
--

As California’s wildfire season gets underway in earnest this month — with crews working to contain a 14,000-acre blaze in rugged Modoc County on the Oregon border — new research underscores the risks that modern wildfires pose to firefighters’ long-term health.

Studies long have linked firefighters’ on-the-job exposure to chemicals and toxins in urban blazes with an increased risk of cancer. More recently, as urban-style development reaches into once remote stretches of California’s mountains and forests, wildfires are decimating not only vast swaths of forest but also whole communities of homes and businesses. That means firefighters are dealing with exposure to the intense heat produced by burning vegetation as well as fuels and carcinogens more common in urban fires. And, wildfire crews typically aren’t equipped with the bulky protective gear urban firefighters wear.

A University of California-Berkeley study released in July underscores the potential risks: It found elevated levels of mercury and other toxins in the blood of firefighters who had battled the deadly Tubbs Fire, which destroyed thousands of homes in Napa and Sonoma counties in 2017.

Tony Stefani, a retired San Francisco Fire Department captain, started the San Francisco Firefighters Cancer Prevention Foundation in 2006 to educate his colleagues about job-related cancers and promote early detection. After 27 years on the job, Stefani was diagnosed with transitional cell carcinoma, a rare cancer of the urinary system, and successfully treated. Stefani, 68, spoke with California Healthline about the cancer risks firefighters face and prevention options. The interview has been edited for length and clarity.

Q: What do we know about the link between firefighting and cancer?

We know there is a definitive link between cancer and firefighting. An important study is the 2010 study conducted by the National Institute for Occupational Safety and Health examining causes of death for more than 30,000 firefighters back to 1950. We’re considered to be a healthier group of people in the workforce — firefighters stay in shape and have good medical coverage. But the study found we had higher rates of multiple cancers, including oral, digestive, prostate and breast cancers. The study also linked the number of fires a firefighter fought with a higher risk of a cancer diagnosis.

Q: The UC-Berkeley study found firefighters deployed to the Tubbs Fire had higher levels of mercury in their blood than crews not deployed. (Mercury is a neurotoxin that can damage lungs, kidneys and other organs; it has not been linked definitively to cancer.) What do you hope comes from this kind of research?

What we want this study to bring about is change to better protect women and men fighting these wildfires. The firefighters from San Francisco and other jurisdictions had severe toxic chemical exposures. They were not suited up for residential fires. They were in lightweight wildfire gear. They did not wear self-contained breathing apparatus, which can weigh 30 to 40 pounds.

Q: How does your foundation work with firefighters?

The foundation provides free cancer screenings and free genomic testing if insurance won’t cover it. We pay for second opinions and medical transport costs — for example, if firefighters are sent to another state for clinical trials. We’ve also been involved in studies that show a direct correlation between cancer and the firefighting profession. We have no paid employees. Our money comes from firefighters.

Q: What changes would you recommend to protect firefighters? How well are government leaders responding?

The current San Francisco Fire Department administration is excellent and making a lot of changes, including cultural change where firefighters are taking better care of themselves before and after fires.

Every firefighter should have a complete blood panel and urinalysis done every year [to look for] indicators of cancer. It’s not easy to get people into the doctor’s office, but if fire departments encourage that and have it covered by insurance, that would be great.

The equipment is changing, but not every department can afford new equipment. A lot of the personal protective equipment that firefighters wear is embedded with fire retardant chemicals that are themselves a problem. Even though firefighters are protected, some of these toxic chemicals can get into a firefighter’s skin.

Departments also have to look at how to better protect their firefighters [traveling to help] during wildfires, including limiting the time they’re in that environment. When these strike teams go out, they can work from 12 to 24 hours at a time, with a 24-hour rest period. That’s a long time to be exposed. I know that departments will run themselves to the bare bones to help another department. That’s the nature of the brotherhood and sisterhood we live in.

Q: There was a time when firefighters saw protective equipment as burdensome or unnecessary. Do you see that culture changing?

When I entered the San Francisco Fire Department in 1974, it wasn’t mandatory to wear self-contained breathing apparatus. You were fighting fires without any breathing apparatus. I thought I was in good shape and didn’t have to wear it. Which was false — even though I was in excellent condition, at 49 I was diagnosed with this cancer.

After the fire’s out and during the overhaul process — looking for hot spots, cleaning out every structure down to the studs — all that stuff was off-gassing, and firefighters were taking a beating.

There’s a new generation of firefighters, and they’re well aware of cancer risks and the downside of firefighting. Firefighters now wear that breathing apparatus. They also do gross decontamination after every fire. You’ll see a firefighter being hosed down and cleaned off. They’ll change clothes and uniforms now.

We used the same turnout coats and pants until they turned into rags. It was about status; it showed you were working hard. It’s slowly eroding, that culture. There’s always going to be a few who still think they’re indestructible, but when they or a friend gets sick, it’s a completely different story.