As tragic as our domestic mass murders are, they're a fraction of the global carnage caused by guns made in the USA 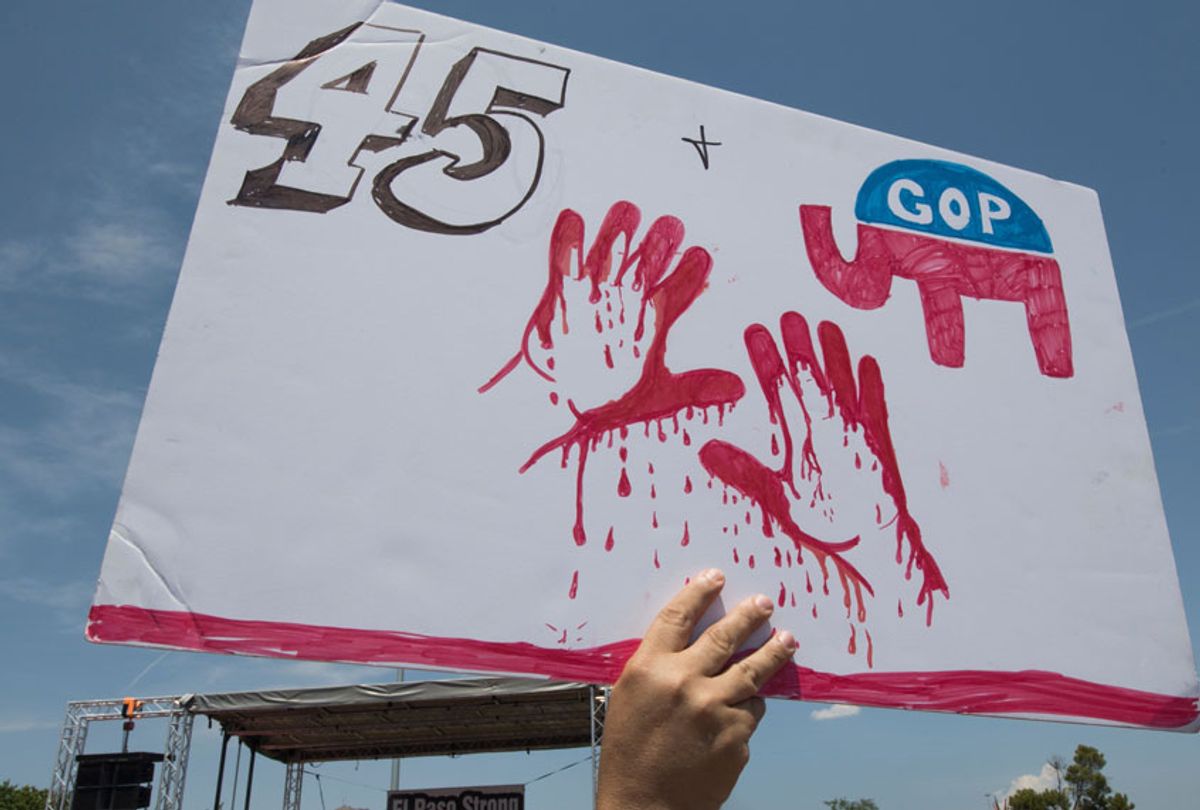 The corporate media fakes soul searching for the root cause of mass murder in a nation that floods the world with weapons of every description and markets violence as recreation and entertainment.

You don’t have to be Marianne Williamson to know that this is another manifestation of late-stage vulture capitalism that has no conscience and feeds off the ever-mounting pile of human carrion it generates worldwide.

As tragic as our domestic mass murders are here, they are just part of the carnage around the world caused by weapons stamped proudly “Made in  America.”

And while our politicians beat their chest about the United States being the bulwark to counterterrorism, we are the chief exporters of its tools out the back door of our loading dock.

Be sure with the billions of dollars the exporters of death have made, they easily bought and paid for the very same politicians who now offer American communities caught in the crossfire of gun violence just thoughts and prayers.

As the Trump administration tortures undocumented families from south of the border, separating children from their parents and putting them all in cages and the El Paso shooter took aim in Walmart, its gunfire from American made weapons used by drug-gangs that have migrants fleeing northward.

That’s the iron ring of death and human misery forged by an economic system bereft of morality that uses just a portion of the vast profits it generates to subvert our politics and our legal system.

In 1994 Congress made it “unlawful for a person to manufacture, transfer or possess” a semiautomatic assault weapon as well as high capacity magazines. The legislation prohibited 19 different models of this class of weapon.

In 2004, President George W. Bush and the GOP, primed with millions of dollars from the gun lobby, let the decade long assault weapons ban expire.

U.S. guns flooded places like Mexico where The Economist reported in May “that 70% of gun crimes in Mexico involve American-bought weapons” and “the share of homicides in Mexico involving a firearm grew from 16% in 1997 to 66% in 2017.”

The Economist continued. “That suggests around half of Mexico’s 33,000 murder victims last year were killed by a gun manufactured in the United States, which had 14,542 gun-homicides in 2017. An American-made gun is more likely to be used in a murder in Mexico than at home.”

While one of President Trump’s first actions was to sign-off on rolling back of an Obama era regulation to keep guns out of the hands of the mentally ill, he also shifted the responsibility for approving gun exports “from the State Department to the Department of Commerce, which applies looser rules,” according to The Economist.

For days now, since the back-to-back mass murders in El Paso and Dayton the corporate news media has pondered ‘just what is it about the American character that lends itself to such random acts of such monstrous violence?’

With panel after panel presented in “special reports” with bloody graphics and 911 calls as an audio scene-setter, the same old talking heads take turns diagnosing the seemingly intractable problem of random gun violence that is so uniquely an American problem.

One expert says it’s the undiagnosed mentally ill, who just happen to be mostly young white men who find succor in the dark recesses of the internet. Another will blame Donald Trump and the resurgence of white nationalism. The on-call ex-FBI and DOJ officials talk about their need for more “tools in their counter-terrorism toolbox” and the need for a domestic “war on terror 2.0.”

Really? We haven’t come to terms with the geopolitical ravages and costs of the initial war on terror, and now they want to bring the concept home. There’s just no sense of the cruel irony that we spent trillions, accelerated global warming and destroyed millions of lives prosecuting the first war on terror and all for what? Live fire drills at Walmart?

On the latest spate of mass murders, the safest ground for pundits to land on in their 30-second answer is to blame the widespread availability of guns in our country that is just five percent of the world’s population but owns 42 percent of the civilian-owned guns on the planet.

That means we are sitting on close to 400 million guns in a country with close to 330 people. Feel safe?

We are captive to the capitalist world view that detaches a product, no matter how potentially lethal, from the consequences of its use as if a commercial transaction where some sort of baptism that absolves the seller from whatever action a depraved customer might take.

Case in point, an economic impact study released in April by the National Shooting Sports Foundation, the firearms industry trade association, that gushed about their sector’s exponential economic growth in “recent years has been nothing short of remarkable.”

Yet, not factored in their cost-benefit analysis is the annual $229 billion in gun-violence related spending as well as the $8.6 billion in direct costs to cover emergency room and overall medical costs attributed to gun violence.

According to the Gifford Law Center, a gun control advocacy think tank, over the past decade 1.3 million Americans have been shot. Close to 36,000 are killed annually, or an average of one hundred a day. There is one mass shooting a day on average in the U.S. — that’s incidents with four or more people killed or wounded by gunfire.