The new West: Smoke in the sky, a purifier at home

Downtown San Francisco was obscured by smoke from the Camp Fire burning about 90 miles north of Sacramento. 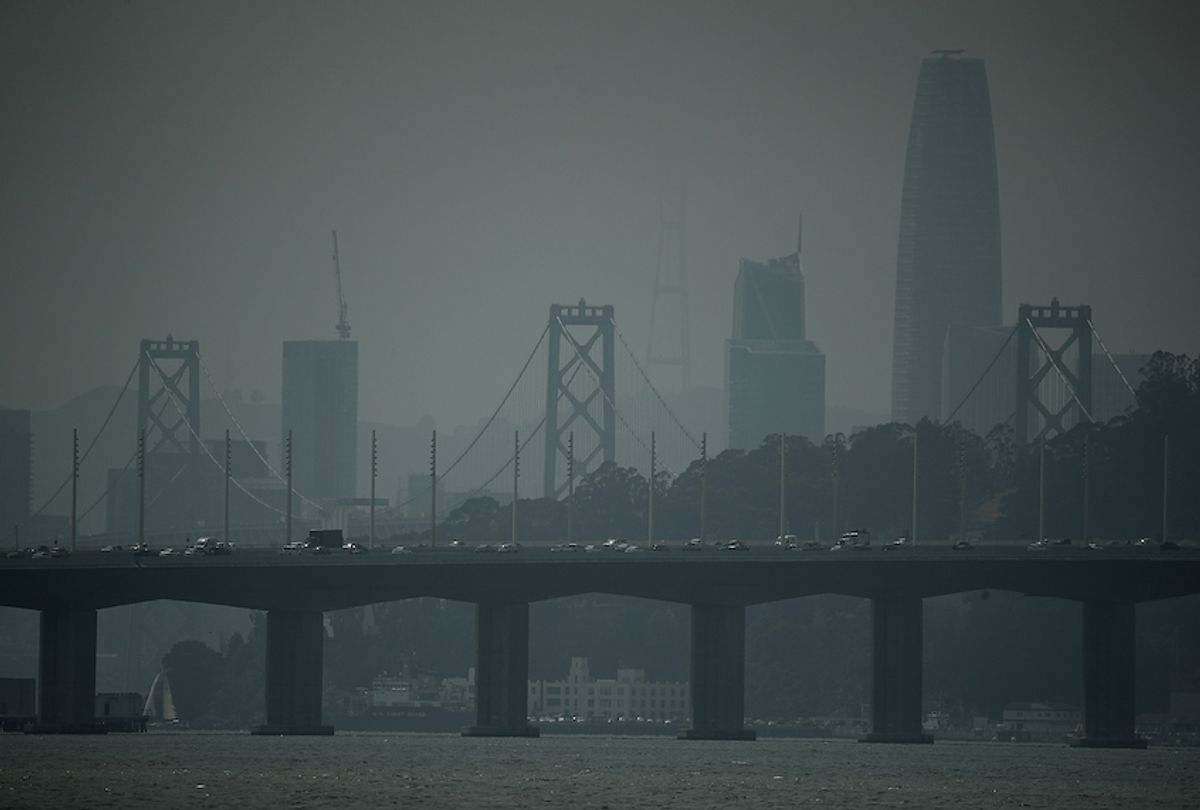 When the Camp Fire began to rage in Paradise, Calif., last November, the owners of the family-run Collier Hardware store in nearby Chico faced a situation unlike any they’d seen.

A business that might welcome 200 customers on an average day, Collier was suddenly dealing with five times that number — “and they all wanted the same thing,” co-owner Steve Lucena said.

Alarmed by dense smoke, shoppers were snapping up portable air purifiers and breathing masks in staggering numbers. Collier Hardware sold nearly 60,000 adult-sized masks in a couple of weeks, and gave away thousands more that were specially designed for children.

“With the purifiers, we had multiple people unloading them from the truck, and they were sold before we could get them all the way into the store,” Lucena said. “People didn’t care what model it was or how much it cost. We’d normally sell four to six in a year, and we sold 100 in a day.”

As hot, dry weather settles upon the West this summer, fears of massive wildfires — and the smoke they produce — are again taking hold. It’s true not only in areas directly threatened by fire, but even those hundreds of miles away where people expect to be shrouded in lung-clogging smoke.

The health risks are real, and they’re already part of a future that public-health experts — and those who sell air-quality products — are anticipating.

“We aren’t depending on wildfire season to make a profit, because we don’t hope for another year of fires,” said Joceline Barron, a spokeswoman for Los Angeles-based Rabbit Air, which makes portable purifiers.

“But we know the market does profit from that season,” she said. “When the wildfires were going on, our phones were ringing all the time.”

Sales of portable air purifiers in California alone are expected to rise dramatically over the next few years, from roughly 469,000 units in 2017 to a predicted 720,000 in 2023, according to a study by TechSci Research presented at a recent meeting of the California Air Resources Board.

Across the country, annual sales of home air filters are expected to cross $1 billion by 2023, according to a report by Research and Markets.

“Interest in effective air purification has significantly risen in recent years due to wildfires,” said Jaya Rao, chief operating officer and co-founder of Molekule, a maker of a $799 purifier. Sales of the unit have doubled each year since it debuted in 2017, Rao said.

“We have seen people buy solely for the purpose of wildfires, whether proactively or in the moment, but we have also seen that the wildfires have raised a general awareness about the need for good air purification every day,” she said.

Workers at Molekule got a close look at the impact of wildfire season last year, when the company was so besieged by orders that it began distributing them out the front of its San Francisco corporate office “to provide relief the fastest,” Rao said.

Researchers from Harvard and Yale in 2016 produced a list of more than 300 counties throughout the West that will be at the greatest risk of dangerous pollution in the coming decades due to “smoke waves” emanating from increasingly intense wildfires. Among the most vulnerable are heavily populated areas such as San Francisco, Alameda and Contra Costa counties in Northern California, and King County in Washington.

Wildfire smoke is dangerous because of its concentration of noxious fine particles, which measure 2.5 micrometers or less (a human hair, by comparison, measures 70 micrometers) and which, unlike common dust, can be inhaled into the deepest recesses of the lung.

In addition to eye and respiratory tract irritation, this particulate matter — PM2.5 in scientific shorthand — can exacerbate heart and lung issues, including asthma and chronic obstructive pulmonary disease (COPD), and may lead to premature death. Children, older people and those with respiratory illnesses are particularly at risk.

“It can be pretty dense. It seeps through the walls and, of course, doors and windows when they’re opened,” said Linda Smith, chief of the California air board’s health and exposure branch.

While much is still unknown about the long-term effects of exposure to wildfire smoke, the microscopic particles are regulated as an air pollutant. A study published last year in the journal GeoHealth found that the number of deaths linked to the inhalation of wildfire smoke in the U.S. could double by the end of the century, to nearly 40,000 per year.

Air purifiers essentially function as scrubbers, removing bacteria, viruses and PM2.5 as the air passes through them. The air resources board recommends their use to limit the effects of wildfire smoke in the home. It maintains a listof devices approved for use in California.

Portable air-cleaning units were once considered specialty purchases, but sales-driven competition has flooded the market, forcing prices down. Where a high-end portable purifier might cost $800 or more, several models now cost less than $100. Shoppers can find models with well-known consumer appliance names like Dyson, Hunter, Honeywell and Whirlpool as well as scores of more obscure manufacturers. Several websites have attempted to evaluate air purifiers, including the size of the room they can effectively clean.

For Jamie Buffington of El Macero, Calif., near Sacramento, the connection was simple enough. Though she had considered buying a purifier because of the pollen in her area, the memory of being inundated with wildfire smoke inspired action earlier this summer.

Buffington said she bought a unit for the master bedroom of her home, and very quickly went back online to order two more, for rooms at a family cabin near Lake Tahoe. During wildfire season last year, she said, “it was terrible down here and terrible up there. It makes sense to have them in both places.”

Indeed, throughout the West and beyond, communities well removed from fires can find themselves fighting through severe smoke and ash, as shifting winds push the plumes hundreds or even thousands of miles.

Oregon’s Department of Environmental Quality recently reported that unhealthy air conditions were on the rise throughout the state, including urban areas like Portland that are far from the wildfires.

Smoke from the Camp Fire was noted across the continent and as far away as New York City.

And while cities and towns will do what they can — officials in Seattle, for example, announced in June the retrofitting of five buildings to use as “clean-air shelters” on smoky days — the choice for many residents will be closer to home.

Back at Collier Hardware, the Lucena family has adjusted its stock. Collier keeps plenty of breathing masks on the shelves, Steve Lucena said, and at least a handful of air purifiers are now in the store at all times. Access to an Ace Hardware supply warehouse in Roseville about an hour and a half away means reinforcements can be obtained quickly.

They are reinforcements the family hopes never to need.

“We know we’ll have fires,” Lucena said. “We just hope they won’t be anything like last year. But we will be ready.”