How the Instant Pot cake maker works: Jenny Dorsey tells us how to get fluffier, moister baked goods 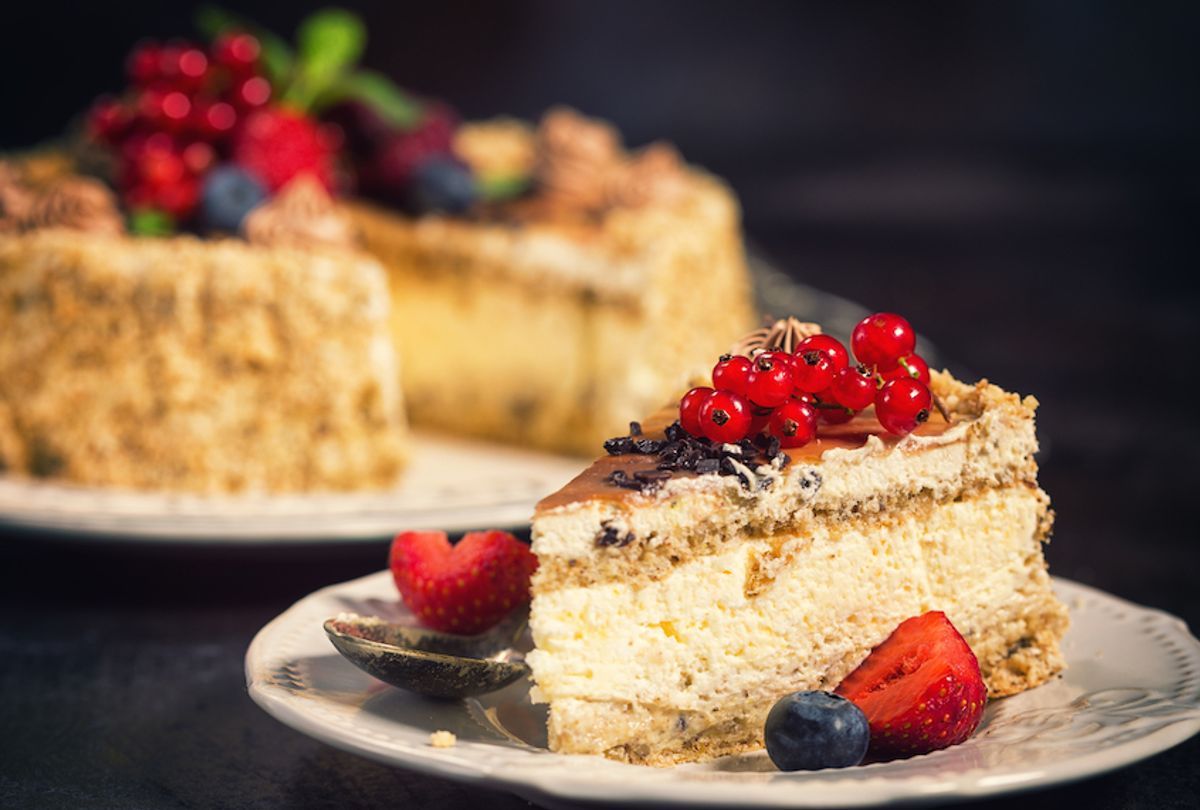 Excerpted with permission from Mastering the Instant Pot: A Practical Guide to Using “The Greatest Kitchen Tool of All Time” by Jenny Dorsey. Copyright 2019 by Skyhorse Publishing, Inc. Also available at Barnes & Noble and your local bookstore.

Before you even purchase your Instant Pot (called “the greatest kitchen tool of all time” by Prevention), Chef Jenny Dorsey’s guide will teach you how to choose the best multicooker for your home, better understand what functions you need, and how to maximize the best aspects of every version of the Instant Pot so you can make the most of your purchase. Dive into each of the seven basic functions and four advanced functions of the Instant Pot—pressure cooker, rice cooker, slow cooker, steam, yogurt maker, sauté/brown, keep warm, cake maker, sterilize, sous vide, and pressure can—with detailed explanations on the science behind each function so you can take charge of creating any recipes you want.

Baking is a dry-heat cooking method that transfers high heat—typically 300°F or above—indirectly from the heat source to the food by containing the food in an enclosed vessel, typically an oven. The heat cooks the food from the outside in, resulting in an exterior that is dryer, firmer, and browner than the inside. The term baking differentiates from roasting, as it refers to food items that start with limited structure (e.g., cake batter) and, through the process of baking, develops a more stable construction. During this process, other important changes also take place within the food item that contribute to the final product: solid fats melt, sugar dissolves, gluten and dairy proteins coagulate, microorganisms (such as yeast) die off, and the Maillard reaction takes place. As discussed on page 64, one of the easiest ways to achieve the Maillard reaction is to cook at high temperatures—past 280°F (137°C)—which is exactly why the outside of foods brown and develop a deeper flavor over the course of the baking process.

The main differentiator of the baking process is the distribution of dry heat over and through the food being cooked. However, some baked items do use a small amount of moisture in the process by placing the baked item in a vessel within a larger vessel filled with water (the bain-marie method). This method is used for more delicate baked items, such as soufflés or custards, as the water acts as an additional temper for the indirect, but still intense, heat inside the oven. The end result is a fluffier, moister baked item that has set more softly than one baked without the water bath.

The Cake Maker setting on the Instant Pot is not “baking” by circulating dry, hot air around the food to cook it. Instead, it is utilizing the same function as Pressure Cook by heating water past its boiling temperature and using the resulting steam to cook the food. Perhaps a better title for the setting would be Cake Steamer. Because of this, cakes cooked in the Instant Pot will not take on many of the typical characteristics of baked goods. Overall, it is advisable to replicate desserts that take well to moist cooking methods or traditionally use the bain-marie in the Instant Pot—steamed cakes, pudding cakes, custards—instead of baked items that prize a crusty, flaky, or crumbly texture, such as baguettes, cobblers, and pies.

When comparing Instant Pot finished cakes to traditional baked cakes, you’ll find significantly less browning to the exterior of the cake. Although the Maillard reaction can happen at lower temperatures with more water, due to the short amount of time and small amount of water being used in most Instant Pot cake recipes, the Maillard often does not occur. The other changes, like fats melting or sugar dissolving, still take place, as there is enough of a temperature increase. Finished cakes are also usually moister than their baked counterparts, due to the fact Instant Pot “baking” requires the addition of water (to create steam) and there is no evaporation throughout the entire cooking process. This could either be a positive or a negative: perhaps a good result for a Bundt cake but not ideal for a crumble. However, it is useful to note that because this additional moisture is being incorporated into the final cake, recipes can use less fats—such as butter or egg yolk—to achieve the same texture.

The Cake Maker setting draws upon the regular Pressure Cook function and thus can be used at two different pressures: High or Low. The vast majority of cake recipes for the Instant Pot calls for the High Pressure setting, allowing users to shave time off a traditional baked cake recipe while still resulting in a moist cake. “Baking” in the Instant Pot will generally need only half the cook time listed in a traditional oven-baked recipe. The Low Pressure setting does not save any cooking time but can be useful for desserts meant to be very soft, airy, and moist—soufflés, sponge cakes, custards—where the High Pressure may deflate the rising process or break the delicate air pockets formed within the cake.

Most Instant Pot cake recipes will use the pot in pot method, where cakes are baked inside of another heat-safe, enclosed vessel while perched on the trivet. This way, the second vessel is not submerged in the boiling water and not directly making contact with the heat source at the bottom of the Instant Pot. It is important to use vessels that can withstand high temperatures, such as oven-safe ramekins and baking dishes, to ensure nothing breaks while being cooked inside the Instant Pot. For certain baking dishes that do not come with a built-in cover, the cake batter still must be covered with foil to prevent condensation from the Instant Pot’s lid from dripping down on the top of the batter and impacting the final consistency of the cake, or many times causing it to not rise at all. It’s particularly useful to fashion an aluminum “sling,” akin to a holding basket, to encase uncovered vessels for easier removal once cooking is complete. All Instant Pot cake recipes will require at least 1 cup of water at the bottom of the inner chamber to start the cook process.

Once the pressure has been selected, you are also able to adjust the temperature to Less, Normal, or More options and select a time range up to 4 hours. The below are general suggestions for the types of cakes best suited for each option, assuming High Pressure has been selected. In Low Pressure scenarios, work from Less to More depending on just how delicate the food is. Make sure your pressure valve is set to Sealing.

Less: Best for lightly cooked desserts, such as pudding cakes, desserts containing delicate ingredients that do not stand up to higher temperatures (e.g., coconut oil), and airier desserts like angel food cake. You will likely need to add some cooking time when using this mode.

Normal: Best for moist but still bouncy desserts of similar consistency as a typical boxed cake or Bundt cake.

More: Best for dense, wetter desserts such as cheesecake, chocolate lava cake, banana bread, and brownies. You may need to remove some cooking time when using this mode.

Once the cook cycle is complete, a good general rule is to use Natural Pressure Release for risen desserts (like cakes) to avoid deflating the food in this last step and Quick

Release for items such as brownies or puddings where the height of the final item is less important. However, for cakes of sturdier construction or desserts easy to overcook, Quick Release could be a better option. Since most cakes will not have achieved the standard browning on its exterior, many Instant Pot bakers will either frost or glaze their finished cakes to mask this effect, or flash-brown the cake in the oven by baking it at a high temperature (450°F or 230°C).

What’s the best kinds of desserts to make in my Instant Pot?

Moist desserts that are traditionally made with the bain-marie method, or are usually steamed, work particularly well in the Instant Pot. Other desserts that are prized for a richer, wetter texture like pudding cakes also make a lot of sense.

What’s the difference between the Instant Pot Cake Maker setting and the regular Pressure Cook function?

The Cake Maker setting uses the Pressure Cook function but offers slightly more control over the final cooking temperature in the inner chamber.

Will my desserts cook faster in the Instant Pot than in the oven?

Some desserts will cook faster in the Instant Pot when cooked on High Pressure, but this is not always the case. A good rule of thumb when cooking on High Pressure is to halve the time allocated to a traditional oven-bake of

that item, then assess its doneness. In Low Pressure scenarios, the cook times in an Instant Pot versus in an oven will be roughly the same.

Can I cook cakes in the Instant Pot without any water?

Can I place the container with the batter directly into the inner chamber without the trivet when cooking in the Instant Pot?

No. This direct contact between the inside vessel and the stainless steel of the inside chamber could be very dangerous when combined with high heat from the heat source at the bottom of the Instant Pot.

Can I pour cake batter directly into the Instant Pot’s inner chamber?

Yes, but this will likely not result in the desired outcome for the cake, because the Instant Pot will be boiling the cake batter to create sufficient steam to cook the rest of the ingredients. It’s also likely there is not even liquid inside the cake batter to boil appropriately, and the entire cake batter may burn.

For cakes where height is important, it’s best to use Natural Pressure Release to ensure the forced venting of a Quick Release does not deflate the cake. Cake batter should also be protected from the condensation of the Instant Pot lid using a cover or aluminum foil. Delicate desserts with limited leavening agents—such as soufflés, which only use egg whites—should be cooked on the lowest, gentlest setting possible: Low Pressure on Less temperature.

My Instant Pot cakes are soggy! Why?

Cooking desserts in the Instant Pot tends to add some moisture to the final product, as they are in a wet cooking environment. If cakes are soggy or too dense, you may need to reduce the amount of wet ingredients or the fat content of your recipe. Alternatively, if only the top of your cake is soggy, it is because the top of the batter was not shielded from the condensation of the Instant Pot’s lid.