One budget line Congress can agree on: Spending billions on the U.S. military

Since WWII, there’s been strong partisan support for military spending

By Rebecca U. Thorpe 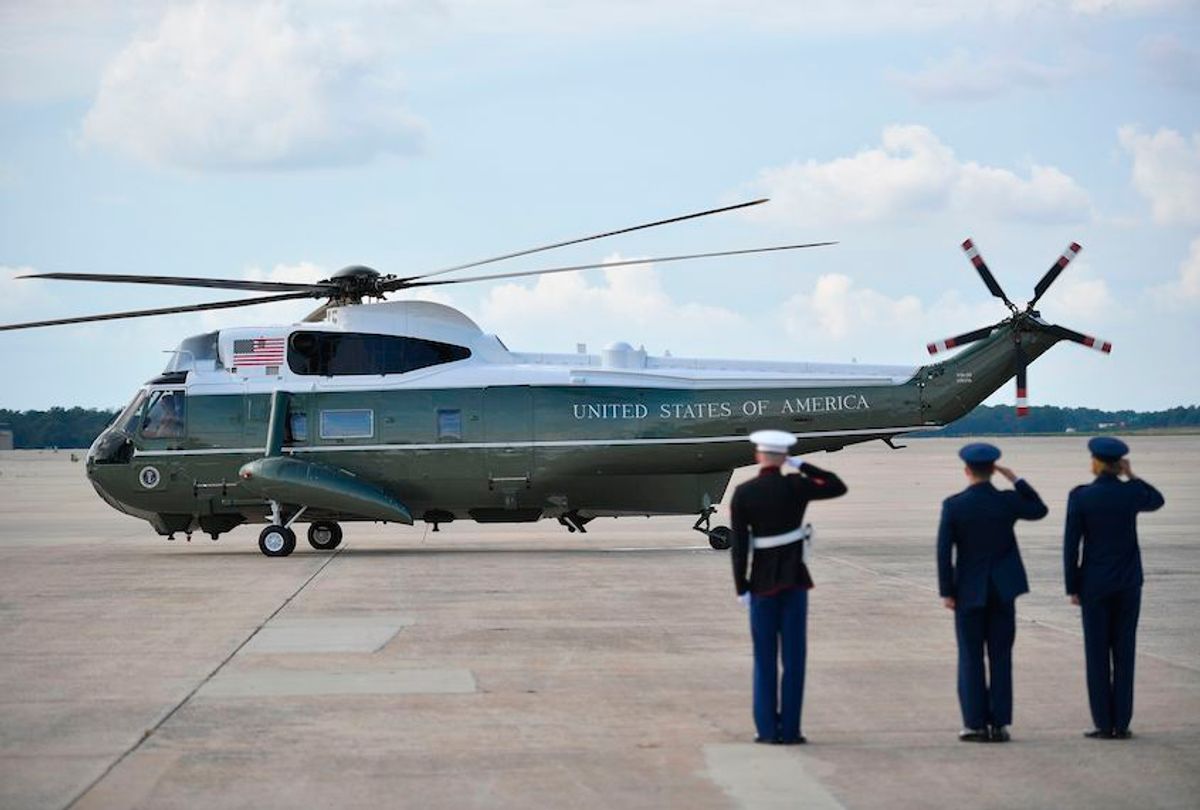 Members of the military salute as US President Donald Trump and First Lady Melania Trump depart on Marine One from Andrews Air Force Base, Maryland on July 7, 2019. - Trump is returning to Washington after spending the weekend at his Bedminster golf resort. (Photo by MANDEL NGAN / AFP) (Photo credit should read MANDEL NGAN/AFP/Getty Images) (Mandel Ngan/AFP/Getty Images)
--

The deal adds US$320 billion over current spending levels spread across defense and non-defense programs, averting the threat of debt default until after the 2020 election and reducing the threat of another government shutdown. To forestall imminent budget crisis, party leaders agreed to pile on to the nation’s $1 trillion deficit by adding another $1.7 trillion to the national debt over the next decade.

Despite stark partisan divisions on deficit spending and social programs, bipartisan support for large defense budgets is not new, nor has it been dislodged in an era marked by increasing partisan animosity.

While the U.S. has the most powerful military machine in history, it is also incomparably the most expensive — and members of Congress work aggressively to maintain it.

The roots of defense spending

As I show in my book, “The American Warfare State,” bipartisan support for large defense budgets and controversial high-cost weapons systems has deep roots in World War II.

During and after the war, defense industries proliferated across the national landscape. Government investments in military technology became an important source of jobs, revenue and capital.

My research shows that, since World War II, Republican and Democratic-controlled Congresses and administrations have routinely spent more on the military than every other item in the discretionary budget added together.

The latest deal raises the baseline defense budget to $738 billion in fiscal year 2020, up from $718 billion this year. This is more than Congress spent on the military at the height of the Cold War after accounting for inflation, and nearly as much money as every other country in the world combined.

Although politicians disagree about how large defense hikes should be and how to fund them, they can rely on a baseline of support from their respective party for defense increases.

The Pentagon is the largest employer in America. Despite steady declines in the nation’s manufacturing sector, U.S. weapons producers continue to generate hundreds of billions of dollars each year while providing a source of reliable employment for more than 4 million Americans.

Defense jobs are spread out across every state and a preponderance of U.S. House districts, including many suburbs, small towns and geographically remote locations that lack diverse economies.

Defense manufacturers and subcontractors for each weapons system deliberately distribute defense dollars across as many congressional districts as possible, specifically targeting defense industries in more remote, rural areas that are inordinately reliant on the defense dollars that they receive.

As a result, many members of Congress view defense spending as a bipartisan stimulus program, where the immediate benefits of continued investment — protecting local jobs — outweighs long-terms costs in strategic trade-offs, waste or inefficiency.

For instance, consider the F-35 joint strike fighter, a stealth aircraft designed to take off like a helicopter, fly at supersonic speeds and manage aircraft-carrier landings. The costs amount to $100 million per plane and $1.5 trillion over life of the program. The F-35 has experienced chronic delays, cost overruns and mechanical problems since its inception.

Yet, F-35 unites unlikely allies from conservative Kay Granger (R-Texas) chairwoman of the defense appropriations subcommittee representing Fort Worth, where a sprawling Lockheed Martin plant assembles the plane and the program is viewed as vital to the economy —- to self-declared socialist Bernie Sanders (I-Vt.) who fought to get the F-35 unit assigned to the Air National Guard in Burlington.

Although the plane has only been used in combat one time, Congress voted along bipartisan lines to spend an additional $10.7 billion for 77 more planes in the FY2020 budget.

During the second Democratic presidential primary debates in late July, the candidates uniformly indicted the Republicans on tax cuts, deficit spending and lack of action on pressing security needs like cyberattacks, election security and the climate crisis. Yet, no candidate mentioned defense cuts or reduced funding for high-tech programs, like the F-35, as a potential source of revenue or strategic necessity.

While large numbers of Americans support an aggressive American military posture, a diminishing percentage of Americans are actually involved with the military.

Americans are increasingly insulated and isolated from the political, economic and human costs of warfare. Selective deferments in Vietnam and elimination of the military draft in 1973 transformed military service from a widely shared civic duty to a voluntary option, which severed most Americans’ connections to the military. Increasing reliance on private military and security contractors in U.S. war zones also reduce the number of volunteers needed to fight wars overseas. Finally, greater use of unmanned technology, like drones, makes it possible to engage in overseas conflicts without placing American lives at risk.

As a result, fewer Americans today serve in the armed forces and fight or die in U.S. wars than any other period in the nation’s history. At the same time, the burden of serving multiple overseas deployments falls disproportionately on the poor, less educated and communities of color.

The importance of defense spending for core Republican and Democratic constituencies and increasing public insulation from war make it difficult to have a national conversation about downsizing or reprioritizing defense budgets. As the latest budget deal reflects, this rare point of partisan agreement is increasingly perilous to a nation facing unchecked budget deficits and new geopolitical realities.

MORE FROM Rebecca U. Thorpe