Retirement security should not be a pipe dream 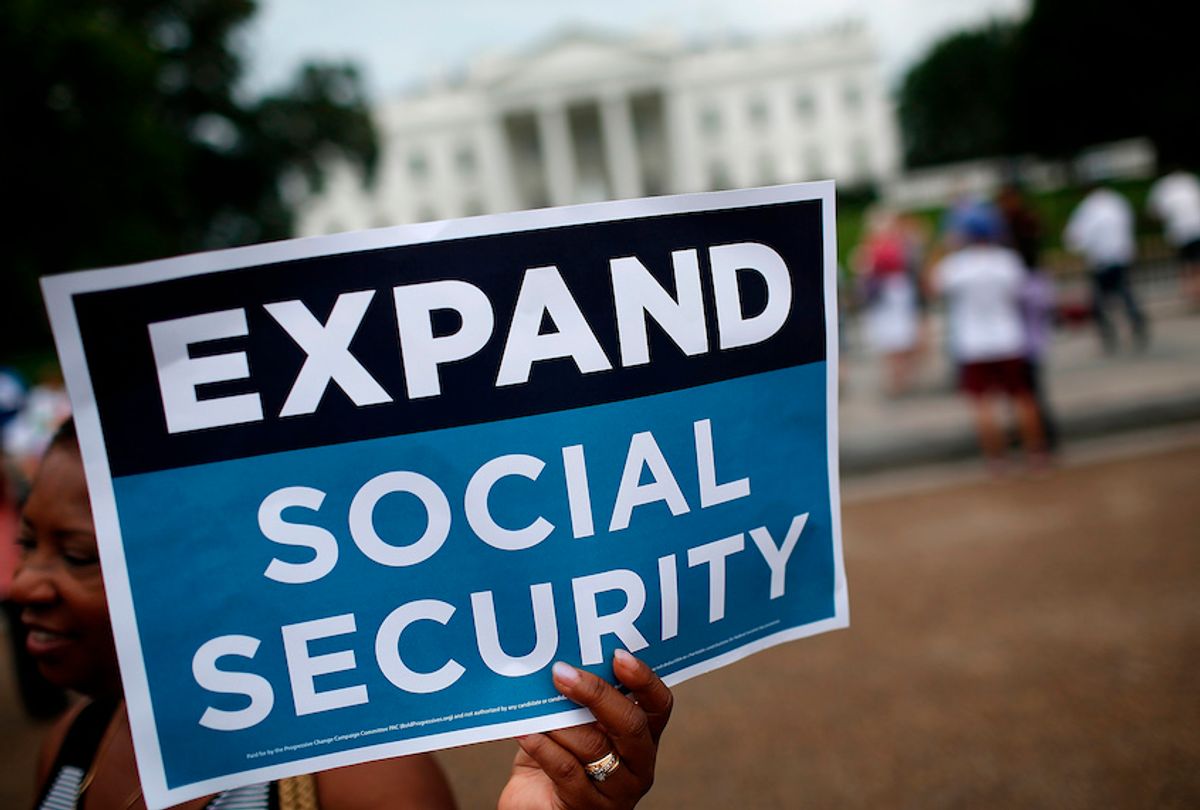 Activists participate in a rally urging the expansion of Social Security benefits in front of the White House July 13, 2015 in Washington, DC. (Win McNamee/Getty Images)
--

For millions of workers, Social Security is all they have to keep them from destitution in old age. Even with Social Security’s guaranteed benefits, they struggle to make ends meet. Fortunately, Congress can easily strengthen retirement security by expanding Social Security. Congressman John Larson (D-CT) has a bill to do just that: The Social Security 2100 Act, which is supported by 90 percent of Democrats in the House of Representatives.

Nearly four in five Americans live paycheck to paycheck. In 2018, the Federal Reserve Board found that four in ten Americans could not afford $400 for an emergency expense. Low wages combined with the high cost of health care, housing and education prevent people from putting aside funds for retirement. The Government Accountability Office reported earlier this year that almost half of households headed by Americans aged 55 and older have no retirement savings.

Equally concerning, most companies no longer offer pensions to their workers — a guaranteed monthly income. Instead, if they are lucky, workers get small financial contributions toward their retirement that do not amount to a whole lot. 401k plans and other so-called “defined contribution” plans do little good if workers are forced to spend their income on basic needs and have no money to save.

After retirement, people often struggle to afford high health care costs. Medicare only covers about half of these costs. (If enacted, Medicare for Allwould cover all of these costs.) According to the Government Accountability Office, there is a high likelihood that many Americans with retirement savings will outlive those savings.

Social Security’s one shortcoming is that its benefits are extremely modest by virtually any measure. Workers earning around $50,000, who retired at age 62 last year, received only 32 percent of their pay — much too little for them to maintain their standards of living.

Social Security today is in strong financial shape. It can pay all benefits in full and on time for the next 16 years, and 93 percent of promised benefits for the nest quarter of a century. The 2019 annual report of the Social Security Board of Trustees shows that Social Security now has an accumulated surplus of about $2.9 trillion. By the year 2100, it will represent just 6.07 of GDP. Social Security’s retirement, disability, and survivor benefits represent a far lower percent of GDP than counterpart programs in other wealthy countries.

The Social Security 2100 Act would strengthen Social Security so it can pay all benefits in full and on time through the year 2100 and beyond. Additionally, it would increase Social Security’s modest benefits for the first time in more than four decades. It would help make retirement security a reality for millions more Americans.

Democrats are fully behind the Social Security 2100 Act. It has 210 co-sponsors, and the plan is to pass it in the House of Representatives this fall. But Republicans have been unwilling to stand behind it. The Republican “plan” is tocut Social Security benefitsby 20 percent in 2035 and jeopardize the economic security of millions of Americans.

Retirement security should not be a pipe dream. Strengthening Social Security, a cost-effective earned benefit, is the smartest way to protect the financial well-being of older Americans.

Diane Archer is president of Just Care USA, an independent digital hub covering health and financial issues facing boomers and their families and promoting policy solutions. She is the past board chair of Consumer Reports and serves on the Brown University School of Public Health Advisory Board. Ms. Archer began her career in health advocacy in 1989 as founder and president of the Medicare Rights Center, a national organization dedicated to ensuring that older and disabled Americans get the health care they need. She served as director, Health Care for All Project, Institute for America’s Future, between 2005 and 2010.