The University of Alaska system's 2020 budget has been cut by 41 percent. 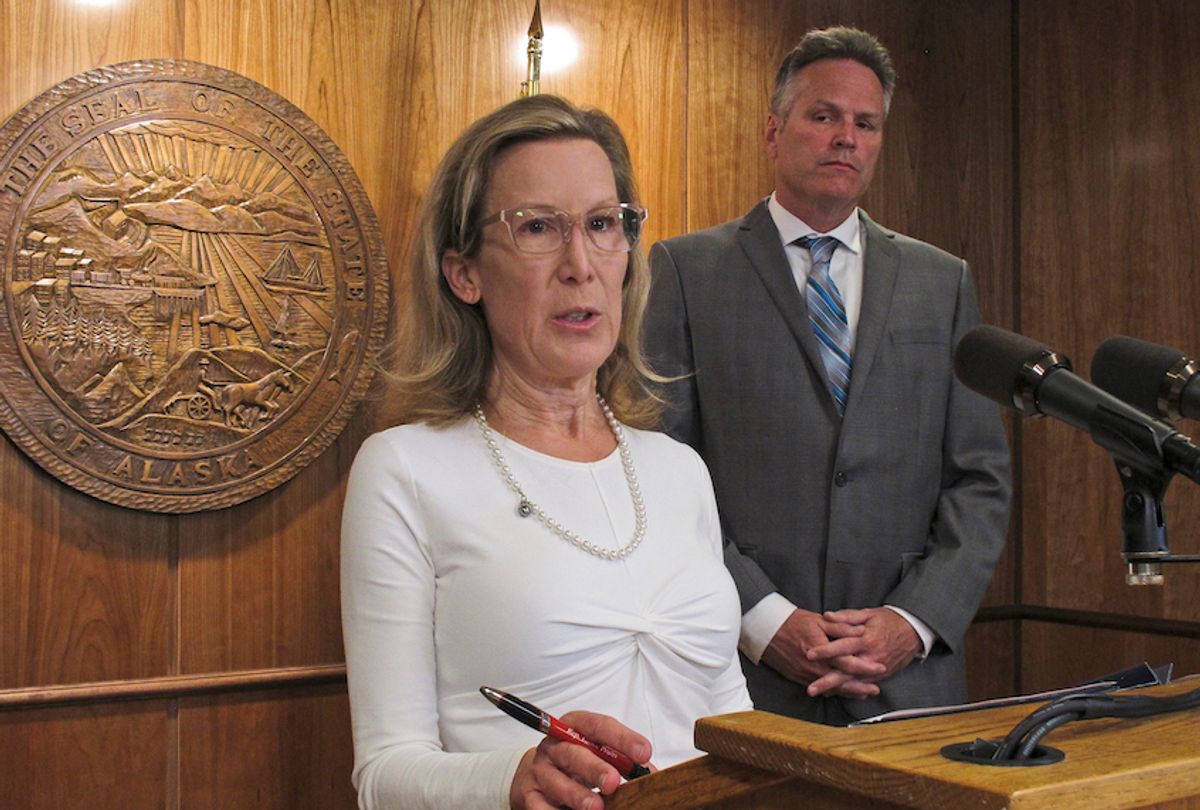 Donna Arduin, director of the Office of Management and Budget, at podium, comments on the governor's state budget vetoes at the state capitol in Juneau, Alaska Friday, June 28, 2019. At right, with Alaska Gov. Mike Dunleavy. The university system, health and social service programs and public broadcasting were among the areas affected by vetoes. The budget agreed to by the House and Senate cut state support for the university system by a fraction of what Dunleavy proposed. Lawmakers have the ability to override budget vetoes if they can muster sufficient support. (AP Photo/Becky Bohrer) (AP Photo/Becky Bohrer)
--

In an attempt to balance Alaska’s books, Gov. Mike Dunleavy (R) cut the University of Alaska system’s 2020 budget by an astonishing 41 percent, to the tune of $130 million dollars. Thus far, the Alaska legislature has failed to overturn this drastic measure.

This is not an isolated incident but rather part of a coordinated effort. In states across the country, one woman is typically present when states start slashing: Donna Arduin.

Arduin has a long history of going state to state to cut budgets — dating back to at least 1995. Therefore, it’s no surprise that she is one of the major players behind the University of Alaska cuts.

When Dunleavy increased the power of Alaska’s budgeting office, Arduin had only lived in Alaska for two weeks. From New York to California, Florida, and now Alaska, Arduin has been cutting budgets under GOP governors.

“She’s basically a mercenary,” Trevor Griffey, historian and lecturer at UCLA, told WhoWhatWhy. Our efforts to get a comment from Arduin were not successful.

Alaska’s budget has failed to recover from oil prices nosediving in 2014. Despite this lack of income for the state government, raising taxes has been off the table for Republicans. In Arduin’s own words, “asking Alaskans to contribute more money should not be an option.” This means that cuts would be made and the Dunleavy administration settled on a target — the university.

The shockwaves will be felt by the entire state, including programs not directly funded by the university. For example, the Alaska Climate Change Adaptation Center is getting money from the United States Geological Survey. Scott Rupp, its university director, predicts that the cuts will still impact the research center.

“Regardless of the end result, I do think it is clear that this crisis will impact our long-term research agenda through the loss of some of our researchers and staff through time — either because people seek other opportunities that provide more certainty and stability, or, in the worst case scenario, because they will lose their position,” Rupp told WhoWhatWhy. “There is really no aspect of research and/or discipline that will not be impacted — from engineering to geophysics to biology.”

University budget cuts like the one affecting the University of Alaska have been getting steadily worse over the past 30 years. According to John Quinterno, the head and founder of the consulting firm South by North Strategies, public education has shifted from a public, common good to one that is primarily funded by tuition costs over the past 30 to 40 years.

“It really accelerated post-2008” following the recession, Quinterno stated. He added that higher education “is the one sort of item in state’s budgets that in some ways is totally discretionary.” And when times get tough, its is often the first thing to go.

This nationwide trend of budget cuts was accelerated in 2011 when the University of Wisconsin system faced a $250-million cut implemented over 2 years.

“Every time there’s an escalation … [and] if that escalation isn’t rolled back, it becomes a new model for this ongoing war against the provision of any kind of public good,” Griffey told WhoWhatWhy. In the case of Wisconsin, “The failure to push [GOP Gov. Scott] Walker out of office” despite his continued attack on labor rights and cutting taxes for the wealthy brought about a manufactured budget crisis, Griffey said.

“Undermining the provision of public goods and some universal access to education and social services became known as the Wisconsin Model.” That model has been replicated in Kansas with the deep tax cuts orchestrated by Arduin’s associate Arthur Laffer in 2012 — cuts that signified a trend of similar austerity shocks nationwide.

But what do these budget cuts mean for the future of higher education elsewhere? Experts believe they could be replicated in other states — although there is something that sets Alaska apart.

“The potential success of Alaska could produce an Alaska model,” Griffey said. “What marks it as especially unusual is that, usually, these tax cuts go to the top 1 percent or top 10 percent, whereas Alaska’s political culture allows for a kind of democratized dividend where every citizen gets a payoff for getting rid of some of their rights.”

The dividend Griffey is referring to is the Permanent Fund Dividend, which gives a couple of thousand dollars a year to Alaska residents to offset the rising cost of living. However, instead of making adjustments to the fund or raising taxes, Dunleavy opted instead to decimate the University of Alaska’s budget. “It buys consent,” Griffey said.

Cuts like these particularly affect many people’s ability to access the middle class, experts say. And as cuts increase, tuition and debt rise. More than ever, college goers are people of color and are often first generation students or come from lower income families, Quintero noted, adding that these students “are less prepared to deal with the financial pressures that come with a shift to a primarily fee-supported, debt-financed approach to higher education.”

Universities are becoming less accessible, and they turn “away from being research centers and into vocational schools that do workforce training but don’t develop critical thinking or power analysis among people who are poor and working class. I think those are the actual goals of this policy,” Griffey explained.

According to Quinterno, it’s no coincidence that presidential candidates like Sens. Elizabeth Warren (D-MA) and Bernie Sanders (I-VT) are popular among student-age voters.

“I think at the national level, you are definitely seeing frustration and pushback,” he said. “And I think it’s getting manifested in the support and popularity of different proposals for either forgiveness of student loan debt or to revisit or reconceptualize how we pay for higher education.”