Donald Trump and the Republican Party hate America: It's time to say it

For all they blather on about patriotism, the unctuous Republicans are the ones who really despise their country 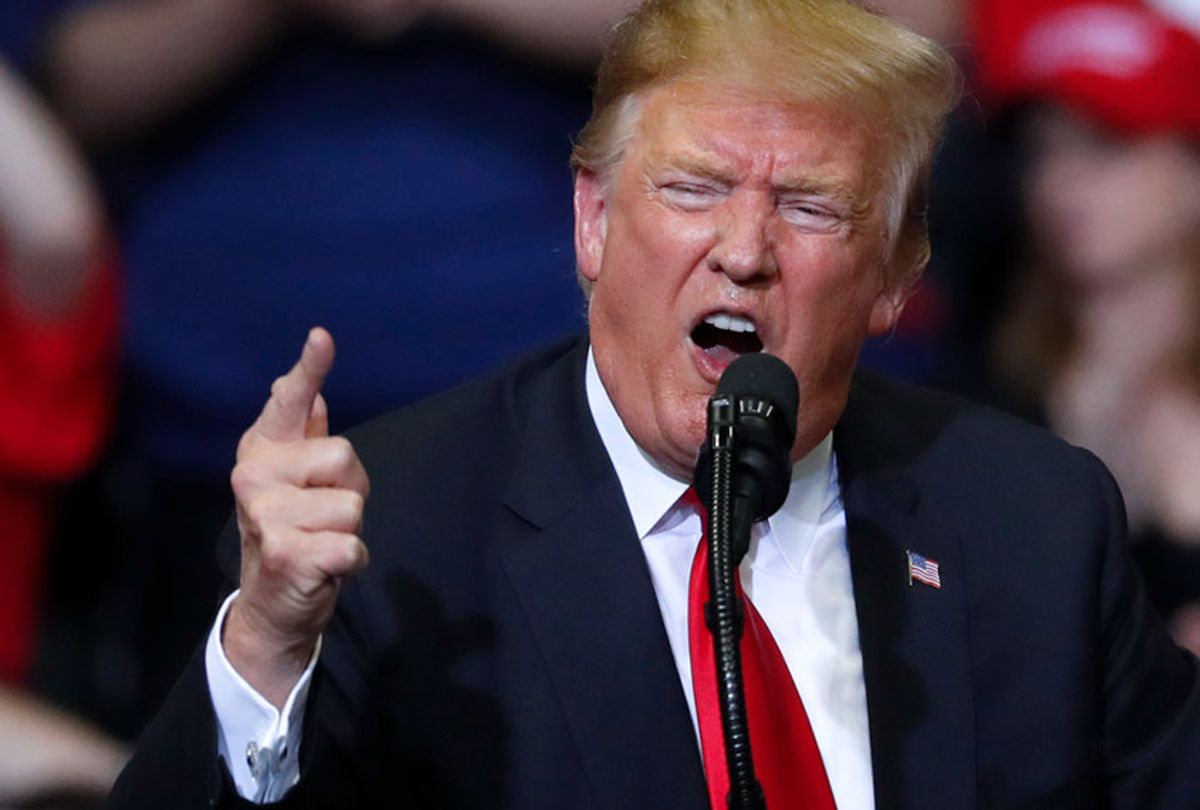 For most of modern political history, the Republican Party has used patriotism — an odd and obfuscating sentimentality — as a weapon to shame critics of American foreign policy, and turn the general public against dissidents who reject the folly of Empire maintenance through violence. Samuel Johnson’s excoriation — made famous by Bob Dylan — that “patriotism is the last refuge of scoundrels” always seemed accurate in both its denunciation of the manipulative emotion itself, and also of those who take advantage of it for political expediency.

America has collapsed into a prone position, however, where the scoundrels are so brazen in their inhumanity, so bold in their indifference to suffering, and so barbaric in their refusal to compromise for the sake of their own country that only their own language can aptly describe them.

President Donald Trump, his enablers in Congress and his most devoted supporters are anti-American and soft on terrorism.

Progressives have suffered through years of maudlin accusations from conservative politicians and pundits that how they “hate the real America,” because they (according to this absurd allegation), have no respect for the small towns that populate the Heartland.

President Trump provides an example of love for country by ridiculing Atlanta as “horrible” and “crime-infested,” claiming that “no human being” would like to live in Baltimore, and maintaining that black residents of Chicago are “living in hell.”

The enlistees of the Trump cult at his bizarre gatherings applaud, cheer and laugh when their high priest derides American cities, and disparages the millions of their compatriots who reside within them.

It does not require the discerning eye of Sherlock Holmes to notice that the geographic objects of Trump’s hatred are always metropolitan areas with high percentages of black inhabitants. If the far right were sincere in their concerns about urban decay, they would use their political power to provide assistance, in the form of targeted public policy, to poor neighborhoods. Needless to say, every Trump budget proposal has recommended the reduction of funding for social welfare programs, from after-school activities for children to public transit subsidies for the elderly.

With Trump’s every incoherent utterance, racism is the elephant dung in the room. One might have noticed that he never disparages the poorest counties in Appalachian West Virginia, Kentucky and Tennessee.

It would appear that Trump and his sycophantic fascists-in-training simply don’t like black Americans, and do not consider predominantly black cities as part of the “real America.” Shocking news, no doubt, for anyone who has spent the majority of their days in a coma, but it makes lectures on patriotism from people who so clearly hate so much of their own country particularly vomitous.

Approximately one-fifth of Americans are Hispanic, and Trump has made it clear that they are also unworthy of patriotic camaraderie. Those who immigrated from Mexico are “bringing crime, bringing drugs, they’re rapists,” and a “few are good people,” but even Gonzalo Paul Curiel, a judge born and raised in Indiana, is a pariah. When he was prepared to adjudicate a case involving Trump’s fraudulent “Trump University,” the current president, and then nominee of the Republican Party, implied that Curiel was unfit for the task because, “he happens to be, we believe, Mexican.”

The anti-Americanism of Trump is not merely a rhetorical device, like ubiquitous “death to America” chants that never go anywhere in Middle Eastern countries, but an intellectual usher of policy responsible for the deaths of his fellow citizens.

Two-thirds of the terrorist incidents in the United States are committed by white nationalists, most recently the mass shooting in El Paso, Texas, where a xenophobic extremist murdered 22 people.

In 2016, Trump, much to the enthusiastic frenzy of his audience, called for a “complete and total shutdown” of Muslim immigrants until we “figure out what the hell is going on.” He has yet to demand the deportation of anyone with white supremacist sympathies, even though their kind has killed hundreds of Americans in the past ten years. He seems sanguine — even indifferent — to the threat his fellow Americans face from Caucasian-fascism.

He cut funding for programs aimed at recruiting young neo-Nazis to leave their hate groups, and Dave Gomez, a former FBI counterterrorism agent, tells the Washington Post that the FBI is “hamstrung” in its attempts to investigate the growing white supremacist movement in the United States. “There’s some reluctance among agents to target what the president perceives as his base,” he explains.

This is not political strategy. It is sympathy for terrorists. Trump, and the operative administration of his political party, have made a cold calculation that dead Americans are collateral damage in the effort to advance their own repugnant ideology.

Absence of all concern for human life also defines the right-wing agenda on gun ownership in America. The obstinacy demonstrated by the Republican Party at the slightest suggestion of any further restrictions on firearm transactions makes it clear that they consider the profits of the gun manufacturing industry and the power of the National Rifle Association more important than the lives of their countrymen.

Nationalism, according to Trump, Steve Bannon and Stephen Miller, purports to place “America First” in its policy orientation. Yet the lives of American citizens appear to rank last when dealing with the danger of gun violence and white extremism.

Meanwhile, the U.S. Senate Intelligence Committee has concluded that Russia hacked into the election system of all 50 states in 2016. Mitch McConnell, the Republican Senate majority leader, and other high-ranking Republicans, have declined to lift a finger to secure American democracy.

Hatred for American cities, racist hostility toward black and Hispanic citizens, the soft-on-terror mishandling of the white supremacist threat, even as it creates a large body count, the coddling of the gun industry, no matter how many innocent Americans die as a result, and the failure to preserve the integrity of free elections all culminate to create a picture of 21st-century anti-Americanism.

At a recent rally, Trump issued the following directive: “I have a suggestion for the hate-filled extremists who are constantly trying to tear our country down — they never have anything good to say — that’s why I say, ‘Hey, if they don’t like it, they can leave.’ Let them leave.”

On that we can agree.