Trump's outrageous claims of voter fraud have a clear goal: Refusing to accept defeat in 2020

There is no voter fraud; no one's ever found any. But Trump is sowing fears he can use to undermine the 2020 vote 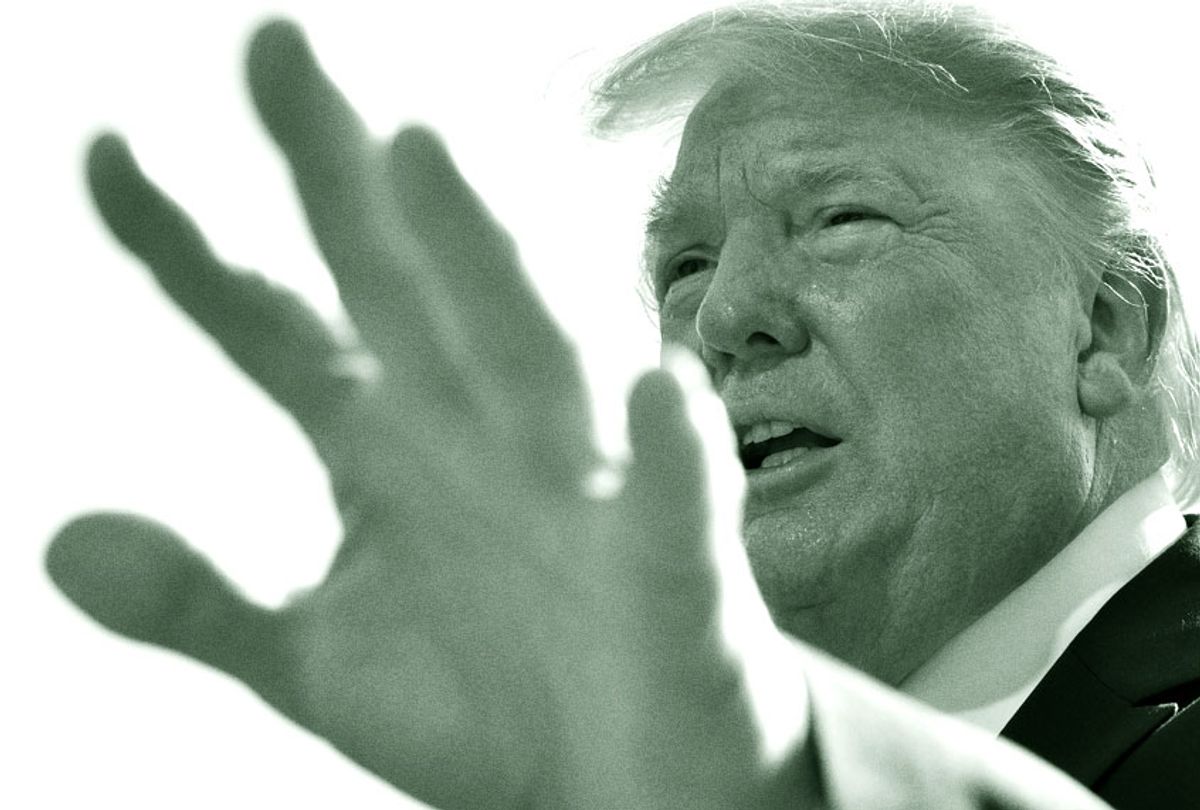 These are difficult times for independent journalism. If you value Salon's original reporting and commentary, please take a moment to support our writers directly. Right here, right now, you can make a direct contribution to Bob Cesca to help make his work possible. All funds donated go directly to our writers — Salon doesn’t take a cut.

A brand new Fox News poll shows Donald Trump well behind the top four Democratic candidates for president, with Joe Biden topping the list at 12 points ahead of Trump. Don’t get happy, though, or else we “tempt the wrath of whatever from high atop the thing,” to quote "The West Wing." We’re still a long way from the 2020 election and roughly a gazillion things could dramatically alter the landscape of the campaign.

Trump, on the other hand, is totally losing his shpadoinkle over the poll results.

He’s becoming so unraveled about the prospect of electoral defeat that he’s beginning to establish a pretext, or a series of pretexts, for challenging the results of the election if the polling turns out to be accurate. Primarily, Trump’s looking at voter fraud and social media as skewing the ultimate results in favor of the Democrats. Yes, the new “unskewed polls” guy is the president of the United States.

Those of us who’ve been paying attention know that voter fraud — at least in the sense the Republicans claim to fear — is statistically nonexistent. Consequently, voter ID is a solution looking for a problem. It's shocking, I know, that Trump would make things up to suit his bizarro-world version of reality. But to be clear, especially for any Red Hats trolls among us today, there is no such thing as in-person voter fraud in America. None. How do we know?

During five of the eight years of the George W. Bush administration, John Ashcroft’s Department of Justice conducted an exhaustive investigation into allegations of voter fraud. During the 2002 and 2004 elections, investigators only managed to pinpoint 26 convictions for actual voter fraud out of 197 million total votes cast. That’s a voter fraud rate of 0.00000013 percent — statistically zero — which no doubt triggers the "Dumb & Dumber" reaction from voter ID zealots: “So you’re telling us there’s a chance ...”

There’s no chance. If I told you there was a 0.00000013 percent chance you had testicular cancer — a 99.99999987 percent chance you were cancer free — would you have your testicles removed anyway? I sure as hell wouldn’t. But we’re living during an era in which our malignant president and his malignant Republican Party are desperately trying to convince millions of voters that what they’re seeing isn’t happening, and that reality is whatever Donald Trump says it is.

The great irony there, of course, is that Trump has a half-century-long history of fabricating “facts” to fit his own criminal agenda. And now, for around 40 percent of American voters, this obvious flimflam artist is somehow the most trustworthy man in politics. The indoctrinated naiveté would be hilarious if it weren’t so destructive.

Back to the evidence. In case the Ashcroft investigation isn’t good enough for Trump and his Red Hats, let’s take a look at Trump’s own voter fraud commission, formerly led by Kris Kobach.

Perhaps this got lost amid the firehose of news, but Trump and Kobach formed the commission because Trump claimed to believe in a ludicrous conspiracy theory that three million votes in California had been illegally cast in 2016, which might (in a thoroughly imaginary hypothetical realm) have meant he didn't lose the popular vote to Hillary Clinton after all, and might (again, hypothetically) have made the president feel as if his penis weren’t as minuscule as everyone says it is.

After less than a year, the Kobach commission was disbanded after not finding any evidence of voter fraud. Most of us Normals knew that would happen before it even launched, mainly because the commission had nothing to do with actual voter fraud and everything to do with massaging Trump’s brittle ego.

Dunlap said the report’s framework was established before the commission even started, suggesting that the results were predetermined. Furthermore, the excuse about state legal challenges, he said, was nonsense: Most federal investigations involve lawsuits and fights over documents and jurisdiction, yet Trump gave up on this one after just eight months. That seems like a hasty exit for such a purportedly serious issue, doesn’t it?

Meanwhile, Trump screeched something he overheard on Fox Business the other day about how Google apparently manipulated “2.6 million to 16 million votes” in favor of Hillary Clinton. Of course that isn't remotely true and he's lying about this one, too.

The Google study Trump tweeted about was conducted by psychologist Robert Epstein, who reported that “search results were, on average, biased to favor Hillary Clinton" on the days he studied. Biased how? It’s possible that reality leaned in favor of Clinton during that time. The "Access Hollywood" tape dropped within the study’s window and there was one debate — a debate Clinton was perceived to have won. As Stephen Colbert once said, “Reality has a well-known liberal bias.” Nevertheless, the sample size of Epstein’s survey was just 95 people. There’s no way “2.6 million votes” could be derived from 95 people.

Furthermore, as the Washington Post’s Philip Bump pointed out:

Google’s search results are specific to users, and there’s no indication in the summary (mentions of using incognito mode, for example) that any effort was made to return unweighed results from the search engine. Nor is there information provided about who participated in the study. Collecting results from a group of well-to-do city dwellers, for example, might help explain any “bias.”

So once again, Trump’s paranoia turns out to be gobbledygook. Yet it doesn’t have to be on-the-level. As long as it feels to his followers like it could be true, and as long as he continuously screams it at his throngs of brainwashed disciples during his rallies, that will be enough to convince millions of voters and more than a few Republican members of Congress to question the results of the 2020 election if Trump loses. Trump is absolutely capable of pulling a stunt like this. In fact, we should prepare ourselves for the very real possibility that he’ll do it.

Don’t forget: If Trump loses, he could face multiple indictments as soon as the new president is inaugurated on Jan. 20, 2021. No one is more aware of that possibility than Trump himself.

There's another great irony here: It's the Republicans who have been tampering with elections in plain sight, whether through welcoming Russia’s active measures or by way of voter-roll purges by red-state officials, to say nothing of the massive gerrymandering of congressional districts in numerous states.

And the most pernicious Republican-led manipulation is voter ID itself. Study after study indicates that far more Democratic voters, especially minorities and young people, are blocked from voting by the various ID laws in different states. That’s what’s so Orwellian about all this: The Republican solution to nonexistent voter fraud is to disenfranchise Democratic voters, thus manipulating the results of elections.

To put it another way: The Republican answer to election security is to make elections less secure — see also “Moscow Mitch” McConnell’s refusal to allow a floor vote on any of the myriad bipartisan election security bills jamming up traffic at the door to the Senate chamber. No matter how loudly Trump shrieks about rigged elections, he himself is the ringleader in a conspiracy to do exactly that. No election or any other form of competition will ever be as rigged as a president who refuses to leave office based on debunked conspiracy theories.

The 2020 election is 441 days away, as of the publication of this article. But it’s not too early to plan for Hong Kong-style protests, and to brace ourselves for the possibility that Trump will not go peacefully. His ungainly drumbeat against alleged voter fraud will only grow louder as the election draws closer, while his already precarious grip on reality grows weaker.