Why are Republicans taking away birth control? Because they don't want women to have it 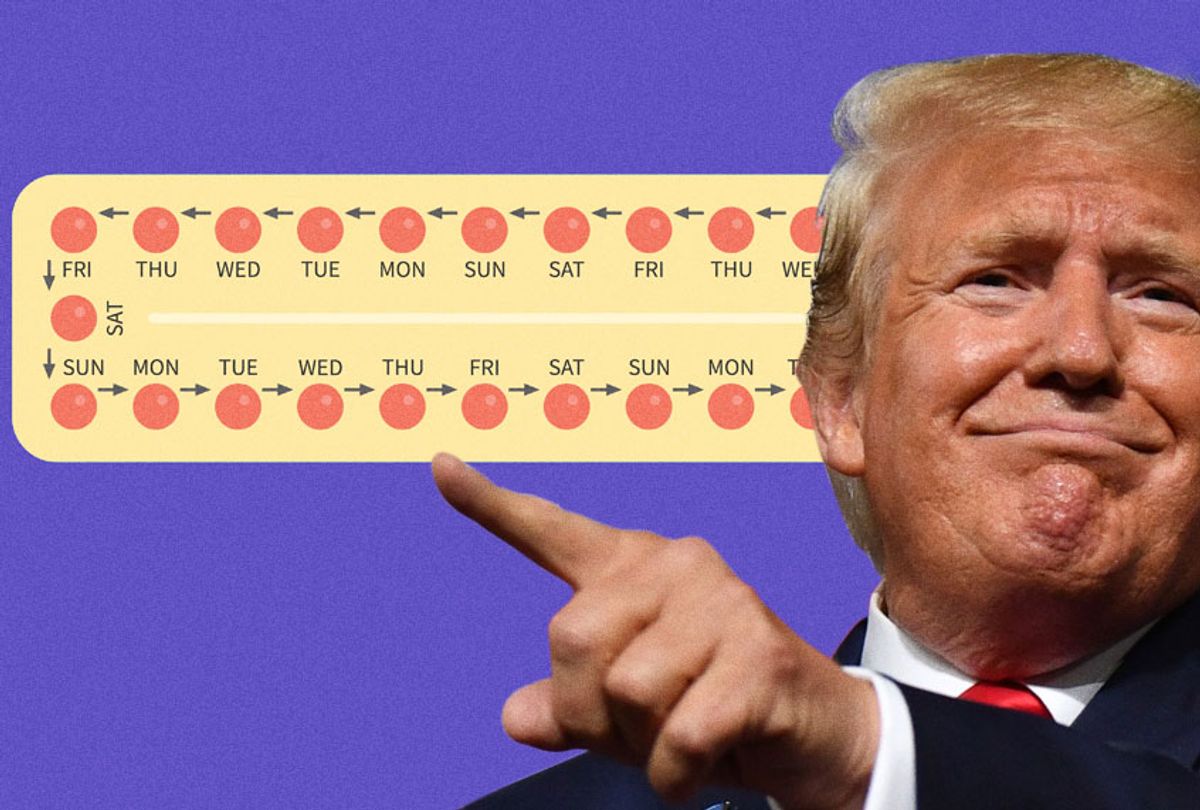 The reason Republicans keep trying to take birth control away from women is simple:  They think birth control is bad and you shouldn't be able to get it.

This should seem obvious, but apparently it is not. Every time Republicans find some new avenue to take away birth control, there is always some elaborate excuse — dutifully repeated by the mainstream media as fact — for why they don't want to take away your birth control, but simply have to for some other reason that is always, they claim, not about birth control. Birth control is never the target, they swear. It's always just the unfortunate collateral damage of some fight over, they swear, something else.

Don't buy it. The reason Republicans keep taking away birth control is because Republicans want to take away your birth control. They hate the power it gives women, especially young women and low-income women.

Conservatives are modern Puritans and, as H.L. Mencken famously said, they are driven by the "haunting fear that someone, somewhere, may be happy."

This fact is getting lost in the coverage of Donald Trump's administration stripping away Title X funding from Planned Parenthood. Title X is a program that covers a lot of reproductive health care — though, importantly, not abortion — but it was mainly set up in 1970 to help low-income women who don't qualify for Medicaid obtain low-cost birth control. But the anti-choice activists who control the Republican Party don't like that this program provides birth control to women who need it. So they are finding ways to slash away at the program until it can no longer accomplish the goal it was set up to accomplish.

The cover story this time is about abortion. The Trump administration passed a new Department of Health and Human Services rule terminating Title X funding for any clinic that offers abortion referrals to patients who might need one. Planned Parenthood, along with any other clinic that follows responsible health care practices, is now facing the loss of this extremely important source of contraception funding.

This is being framed by conservatives as an effort to reduce the abortion rate. That makes about as much sense as taking away measles vaccines from clinics that also treat measles cases.

HHS senior advisor Mia Heck blamed Planned Parenthood instead of the Trump administration for the cut to birth control, saying that all Planned Parenthood needed to go to get Title X funding was to "comply with the regulations that accompany" the grant, which, in this case, means refusing to help women who need abortions.

This is not the first time that Heck has pushed a convoluted excuse for taking away contraception. In her past work for the American Legislative Exchange Council, a Koch brothers-funded right wing think tank, Heck used "religious liberty" as the excuse to separate women from their birth control pills. She argued that an employer's "religious liberty" extends right into an employee's bedroom, and that employers should be able to prevent workers from  using their own insurance plans to cover contraception.

The excuses may change, but the goal remains constant: Chip away at contraception access slowly, so more women lose access and unwanted pregnancy rates trend upward, but so gradually that the public doesn't notice until it's too late.  That's exactly how conservatives stripped away abortion access. Now they're coming for your birth control.

Anti-choice activists tend to be quiet about their anti-contraception agenda, because they know contraception is popular — 99% of women who have ever had sexual intercourse have used birth control — and being too blatant about their attacks would raise the alarm and lead to likely political backlash.

But ye shall know them by their fruits: Not a single anti-abortion organization advocates for contraception, even though it's the only realistic and effective way to prevent abortion. Instead, the anti-abortion groups unanimously promote misinformation about contraception and support legal efforts to restrict birth control access.

Under the radar, anti-contraception forces have been working steadily with the Trump administration to take birth control away. Trump has filled the ranks of HHS with right-wing activists like Valerie Huber,  Matthew Bowman, Katy Talento, Scott Lloyd, Charmaine Yoest and Teresa Manning. They have spread lies about birth control, argued that birth control causes "promiscuity", and claimed that the only legitimate form of pregnancy prevention is abstaining from sex. (One even suggested that birth control is why people get the measles.)

Unsurprisingly, the Trump administration is quietly trying to make Title X as ineffective as possible in terms of its original purpose — to help women prevent unwanted pregnancy. Along with coming up with red-tape reasons for cutting Title X grants to the largest and most popular chain of reproductive health clinics in the country (that would be Planned Parenthood) Trump officials have also tried to rewrite Title X rules with an eye toward further restricting access to contraception.

In 2018, the administration attempted to change the Title X grant-making criteria documents, eliminating all mention of "contraception" or "birth control" and instead favoring groups that pushed abstinence. The idea was clearly to take money away from real clinics and instead give it to groups who would offer women lectures on keeping their legs shut in lieu of prescribing actual birth control.

In fact, one group sent out an email to supporters two months before it got a hefty Title X grant declaring that it would "never provide hormonal contraception" because its focus was "abstinence-based sexual risk avoidance education," which is right-wing jargon for telling women that sex is dirty. Its website also indicated that the group does "not provide contraceptives." While it may now have to have a few birth control packets on the shelves in order to technically comply with Title X regulations, it's a safe bet that women who come there for care will not be met with a compassionate understanding that pregnancy-free sex is a normal and nearly universal human desire.

And that's just one of the many ways the Trump administration has tried to undermine contraception access. New rules require teen pregnancy prevention programs to focus on abstinence-only programs. Employers have expanded rights to impose their anti-sex ideology on employees. Trump has appointed a UN ambassador who claims that "women don't care about contraception." International spending on birth control provision has been cut.

No doubt it's ironic that all this is happening under Trump, a known libertine who has been married three times and seems to have enthusiastically cheated on all his wives. But it's not quite accurate to accuse Republicans of being hypocrites. The anti-choice movement has never been interested in punishing straight men for having sex. Instead, it's about punishing women and LGBTQ people for trying to lay claim to the sexual autonomy that the right believes belongs to heterosexual men alone.

Trump may like having sex with women, but he doesn't want them to have any power. Groping women on a one-at-a-time basis may be fun, but taking away their birth control? That's how you "grab them by the pussy" on global scale.