Sean Spicer joins "Dancing With the Stars": Can he glide away from his legacy of White House lies?

Sean Spicer joins "Dancing With the Stars," of course. But he'll never top his performance behind the podium 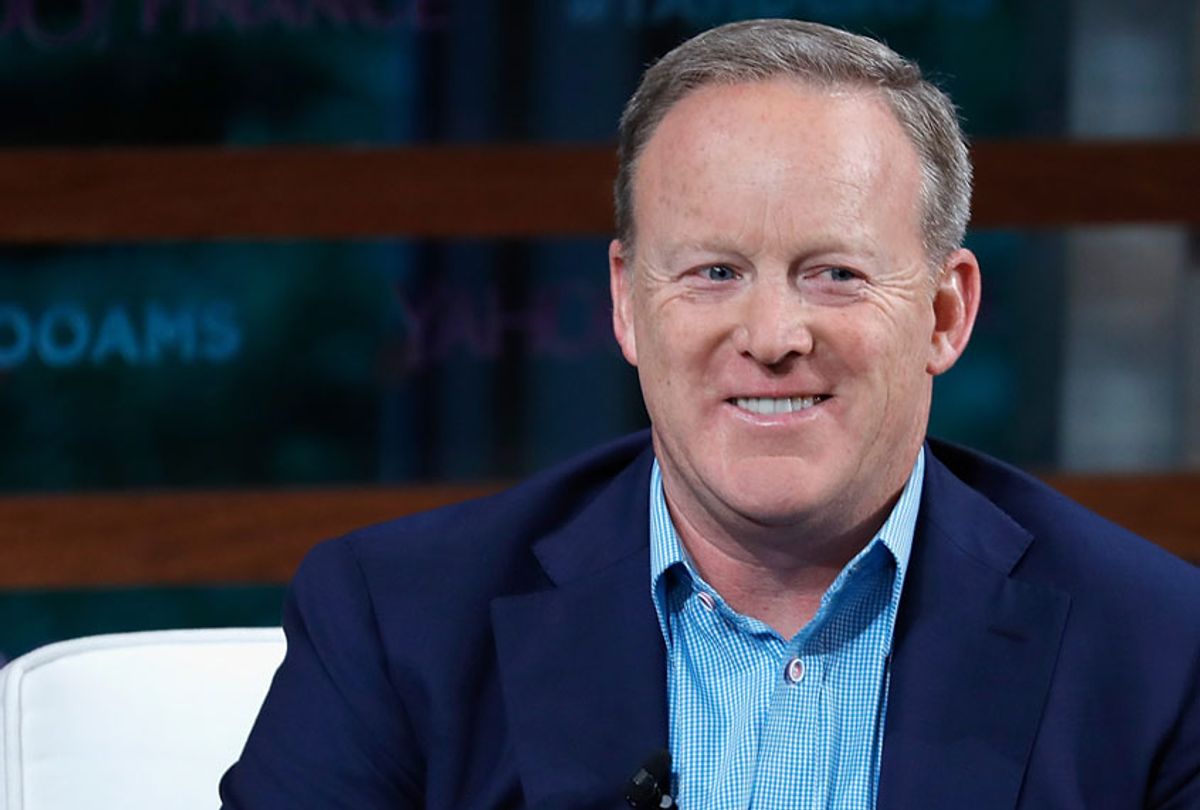 Following his brief tenure working in the Trump White House, former press secretary Sean Spicer has been on something of a weak apology tour — which appears to be reaching a bizarre conclusion on the “Dancing With the Stars” dance floor.

Contestants for the upcoming season were announced today on "Good Morning America." Competitors include “Bachelorette” Hannah Brown, “Queer Eye” host Karamo Brown, “The Office” star Kate Flannery and former NBA player Lamar Odom. Each contestant is paired up with a professional dancer and together they compete for the coveted mirror ball trophy.

When it first premiered in 2005, “Dancing With the Stars” was the show that inspired ballroom mania, as viewers waltzed into local studios for lessons. But now, 28 seasons in, the show has morphed into an equal balance of formulaic glitter and cringe, with only a few truly capable performances each season.

Unlike other competitive dance programs like “So You Think You Can Dance?” that spotlight legitimate talent, “Dancing With The Stars” now grasps at relevance with its choice of contestants. Increasingly, these are people who are connected in some way to the current administration.

In spring 2016, Marla Maples —  the second wife of Donald Trump — made a run on the program. Later that year, just a few months before the presidential election, Former Texas Gov. Rick Perry, who is now the United States Secretary of Energy, appeared on the program, flubbing a Texas-themed cha-cha set to the song "God Blessed Texas."

These contestants appear on the show with only a passing wink given to their political ties and views, a pattern that is already emerging in front of the upcoming season.

“The nice thing is Sean will be in charge of assessing audience size,” "Dancing With the Stars" host Tom Bergeron joked following the announcement on "GMA." He was referring to Spicer’s claim that Trump’s inauguration crowd was the largest in history. (It wasn’t.)

This was the first of many lies that Spicer professed from the White House lectern. In 2017, the New Yorker’s Ryan Lizza predicted those falsehoods would define his legacy.

“It was Spicer’s lies and defense of lies that he will be remembered for,” Lizza wrote. “Spicer defended Trump’s lie about how there were three million fraudulent votes in the 2016 election.”

He continued: “He spent weeks using shifting stories to defend Trump’s lie about President Barack Obama wiretapping Trump Tower. In trying to explain the urgency of the attack on Syria, Spicer explained, ‘You had someone as despicable as Hitler, who didn’t even sink to using chemical weapons.’”

And while some outlets are saying Spicer has “already become the butt of jokes” before even stepping on the dancefloor, Spicer’s appearance on “Dancing with the Stars” allows him to be in on those jokes. In his appearance on "Good Morning America," Spicer already drew some sympathy from the TV audience when he told the story of how he was booted from school band in sixth grade for having "the sense of beat of a steamroller."

Spicer’s turn on “Dancing With the Stars” is also yet another reminder this week that a reality show presidency begets reality show fodder; on Monday, POLITICO reported that Newt Gingrich and an eclectic band of NASA skeptics “are trying to sell President Donald Trump on a reality show-style plan to jump-start the return of humans to the moon — at a fraction of the space agency’s estimated price tag.”

Since this morning's announcement, “Dancing With the Stars” host Tom Bergeron released a statement on Twitter about the upcoming season.

“A few months ago, during a lunch with DWTS’s new Executive Producer, I offered suggestions for Season 28,” he wrote. “Chief among them was my hope that DWTS, in its return following an unprecedented year-long hiatus, would be a joyful respite from our exhausting political climate and free of inevitably divisive bookings from ANY party affiliations. I left that lunch convinced we were in agreement.”

He continued: “Subsequently (and rather obviously), a decision was made to, as we often say in Hollywood, ‘go in a different direction.’”

Bergeron concluded by saying that he hoped that when the new season premieres in September, viewers would recognize the charismatic pro dancers, the unpredictable judges and “the kitschy charm” that has defined the show since its debut in 2005.

Regardless of how the former press secretary presents on “Dancing With the Stars” — and regardless of the potential for devastating Melissa McCarthy "SNL" sketches mimicking his moves on the dance floor — we’ve already seen his defining performance during his tenure in the White House, which was spent lying to the American people.