Evangelicals told Trump he was "chosen" by God. Now he says it himself

Religious right leaders say God anointed Trump as a "king." This week he actually declared himself the "chosen one" 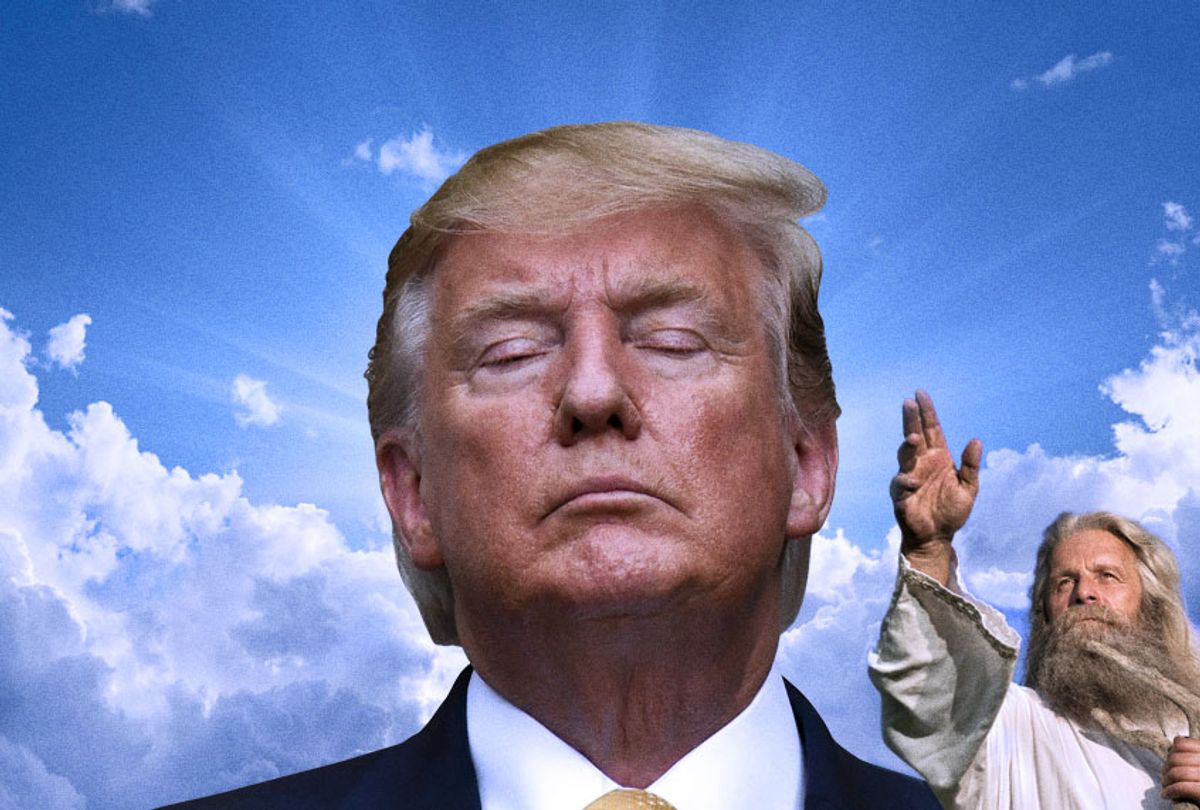 Even for a bottomless pit of narcissism like Donald Trump, Wednesday was an exceptional day for self-aggrandizement. Early in the day, Trump tweeted quotes from one of his more sycophantic — and unhinged — followers, Wayne Allyn Root, calling Trump the "King of Israel" and "the second coming of God." Later that day, when speaking to reporters, Trump embraced the prophet identity again, calling himself "the Chosen One," in response to a question about trade dealings with China.

To be certain, Trump laced in just enough plausible deniability — that he might be joking, that these are just metaphors — to give his supporters grist when accusing liberals of being hysterical for being alarmed about all this. But the grim reality is that Trump is channeling — and in the first instance, directly quoting — the beliefs of evangelical conservatives, a powerful constituency that still holds enormous sway within the Republican Party. And those folks are telling Trump, regularly and in grandiose terms, that he is in fact the Chosen One and has been anointed by God to be the president at this point in time.

While Trump, who worships himself and only himself, probably hasn't given much thought to the deity now or at any other time, one thing is for sure: He loves this idea that he's been chosen by the almighty to be a great leader.

To be clear, white evangelical leaders don't actually compare Trump to Jesus or say he's the son of God or anything like that. But they do use language that compares him to Biblical figures they regard as anointed by God, and speak of him as a prophesied savior come to save America and turn it into the theocratic white-dominated nation-state of their dreams.

As journalist Katherine Stewart, who covers the religious right, explained in a New York Times article last December, the gist of the white evangelical view of Trump is "that he is a miracle sent straight from heaven to bring the nation back to the Lord" and "that resistance to Mr. Trump is tantamount to resistance to God."

Liberty University, run by Jerry Falwell Jr., even helped produce a documentary called "The Trump Prophecy," which was screened in roughly 1,000 theaters before the midterm election last year. In it, a firefighter named Mark Taylor claims he had a religious epiphany in 2011 — when Trump was pushing the racist conspiracy theory that Barack Obama had been born in Kenya — in which God told him that Trump would be elected president.

The word that tends to be commonly associated with Trump in evangelical circles is not "president," however. It is "king." Using numerology arguments, evangelical leaders like Lance Wallnau argue that the 45th president is a modern-day version of the King Cyrus described in Isaiah 45, a Persian emperor the Bible says was anointed by God to free the Jews.

Evangelicals also compare Trump to the biblical figure of King David, particularly when the uncomfortable issue of his frequent adulteries comes up.

"God called King David a man after God’s own heart even though he was an adulterer and a murderer," Falwell said in 2016, defending his choice to endorse Trump. "You have to choose the leader that would make the best king or president and not necessarily someone who would be a good pastor."

In the new Netflix documentary "The Family," which is based on a decade-plus of investigative work by journalist Jeff Sharlet, it's explained that a secretive group of conservative Christian power brokers — including Vice President Mike Pence and former Attorney General Jeff Sessions — preach this idea of the "wolf-king," a leader anointed by God to enact the Christian right agenda. The ruthlessness or immoral conduct of such a leader leaders isn't seen to be at odds with the forgiving spirit of Jesus Christ. On the contrary, these evangelical leaders believe God wants their leaders to be ruthless, because that's what is effective.

As Peter Montgomery of Right Wing Watch has monitored, Christian right leaders speak endlessly of Trump as a chosen vessel for God's will,  saying things like "God has picked him up" and that Trump is "literally splitting the kingdom of darkness right open" and that "the Lord has put His favor upon him."

Some Christian conservative leaders do try to spin a fable in which  Trump is a sinner redeemed by Jesus who now walks the path of righteousness in his personal life. But smarter evangelical pastors understand that while their followers will swallow all sorts of nonsense, that's going too far. Instead, these "king" metaphors allow them to make a different argument: God chooses "imperfect" men to be "vessels" for his will because they have talents — in Trump's case, belligerence and bullying, interpreted as "strength" — that matter more than their sinful behavior.

This reading, perversely, allows evangelicals to interpret Trump's lechery and tendency to curse (they don't really see his racism or encouragement of violence as sinful) as more evidence that he has been chosen by God.

"Cyrus is the model for a nonbeliever appointed by God as a vessel for the purposes of the faithful," Stewart wrote.

Tara Isabella Burton, writing for Vox, explained it this way:

Instead of having to justify their views of Trump’s controversial past, including reports of sexual misconduct and adultery, the evangelical establishment can say Trump’s presidency was arranged by God, and thus legitimize their support for him.

Megachurch minister Jeremiah Johnson gave a sermon in 2015 laying out this argument. Trump "is like a bull in a china closet," Johnson said, but his chaotic nature gives him the power to "expose darkness and perversion in America like never before."

There's no way that Trump — who is always ready to hear that he's the greatest and most important and best and most beautiful person who ever lived — is unaware that Christian right leaders literally speak about him this way, as a vessel anointed by God to do his bidding on Earth. On the contrary, Trump allows these fools into the Oval Office so they can lay hands on him and pray as if they were meeting a great prophet.

Trump, who is as religiously illiterate as a person can get, has little interest in understanding the elaborate narrative that's meant to hold Trump out as "anointed" without quite declaring him a prophet or a saint. (Evangelicals want to keep the option of walking back the Trump worship, if and when the whole thing goes sideways.) But no doubt he loves hearing words like "king" and "chosen" and is now parroting them back — along with not-funny, not-jokes about how he'll still be president in 14 years — as the stress mounts over whether he can recreate the fluke election that got him into the White House in the first place.