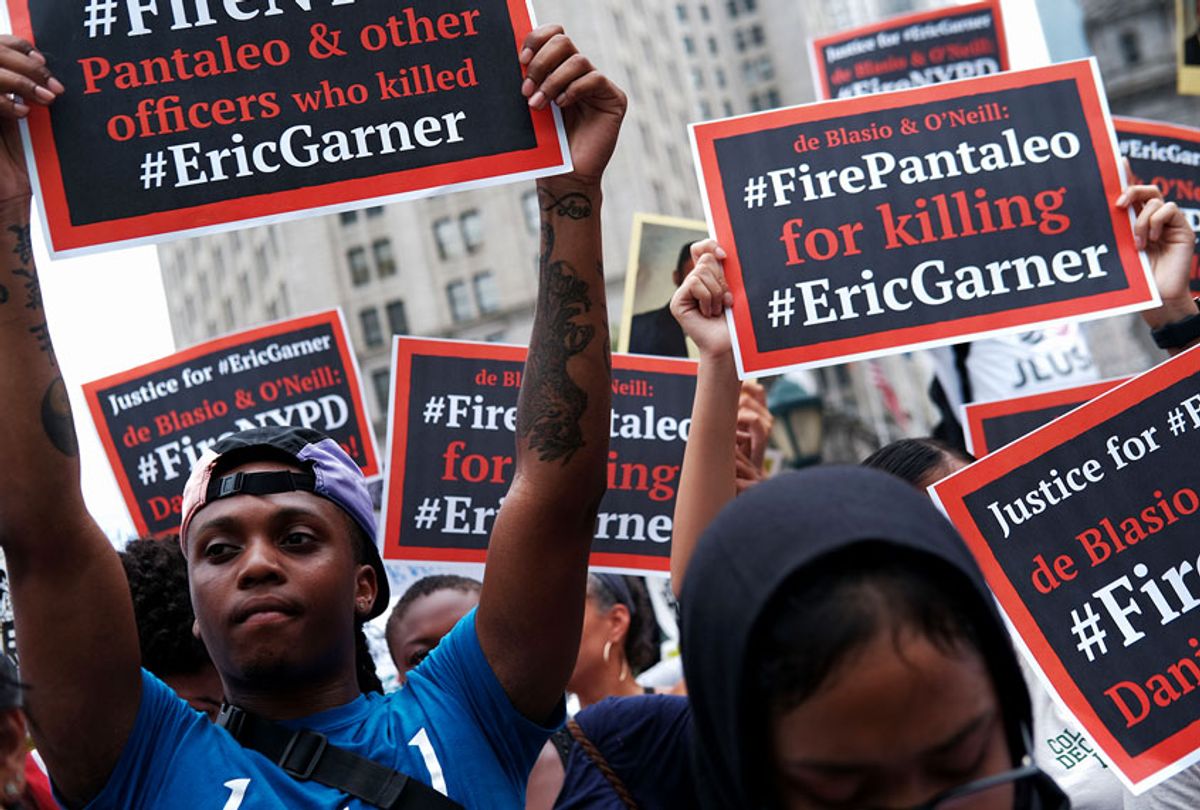 The reaction to the termination of now-former NYPD officer Daniel Pantaleo, the five years it took to see him fired after his chokehold led to Eric Garner's death, and how he was pampered in the meantime by the system that nurtured and coddled his hate, combined with our nation's problems with policing in general, is more proof that black people don’t really matter in America.

Daniel Pantaleo, the NYPD officer whose chokehold killed Eric Garner, an unarmed black man, during an arrest for suspicion of selling loose cigarettes, was fired earlier this week.

"Trials Commissioner Maldonado ruled that Officer Pantaleo’s use of a prohibited chokehold was reckless and constituted a gross deviation from the standard of conduct established for a New York City police officer," NYPD Commissioner James O'Neill said in a Monday press conference.

"I agree with the Deputy Commissioner of Trials' legal findings and recommendations and it is clear that Daniel Pantaleo can no longer serve as a New York City police officer,” O'Neill added.

I wonder, do I live on the same planet as Booker and De Blasio? Are they crazy, or am I?

I keep thinking about the video of Eric Garner’s death. It circulated online to the tune of millions of views and shares. I didn’t re-watch it this week; I promised myself recently that wouldn't be a spectator at any more digital public lynchings. But I remember it vividly: how Garner looked tired and Pantaleo looked like a coward as he squeezed the life out of an innocent man pleading for his survival. I remember how Pantaleo’s gang of craven coworkers did nothing: they watched, which is the same to me as if they had cheered him on. Every cop in that video was involved in Eric Garner's killing; they have innocent blood on their hands.  The only difference is that Pantaleo just lost his job, which is not justice. The rest of them are still working, which is criminal.

BET commentator and Temple University professor Marc Lamont Hill tweeted my exact feelings: “The fact that it took 5 years, international activism, and multiple investigations to get Daniel Pantaleo fired for killing Eric Garner ON VIDEO with a banned chokehold says everything we need to know about the value of Black life in America.”

I’m happy that Pantaleo was fired. He should never be allowed to work again. But this clearly is not justice­. Pantaleo belongs in prison. I’m not a lawyer or a judge, but Pantaleo used a banned chokehold to subdue an unarmed man and it killed him. It’s on film, online, and available for the world to see.

“Our police officers are in distress,” Patrick J. Lynch, president of the Police Benevolent Association, said in a press conference following Pantaleo’s termination. “Not because they have a difficult job, not because they put themselves in danger, but because they realize they are abandoned. The captain has jumped ship. The mayor has told him to do it, and the streets are falling into chaos."

Pantaleo’s life was clearly not in danger. No one abandoned him when he chose to respond to Garner during the arrest with reckless force, setting off what the doctor who performed the autopsy called "a lethal cascade" of events. Pantaleo had a whole group of coworkers in attendance. And within two days of his firing, a GoFundMe set up for Pantaleo had raised nearly $100,000.

I wonder, do I live on the same planet as Patrick Lynch? Is he crazy, or am I?

The Pantaleo news came on the heels of a recent LA Times report by Amina Khan declaring “Getting killed by police is a leading cause of death for young black men in America.”

“About 1 in 1,000 black men and boys in America can expect to die at the hands of police, according to a new analysis of deaths involving law enforcement officers," Khan wrote. "That makes them 2.5 times more likely than white men and boys to die during an encounter with cops.”

“That 1-in-1,000 number struck us as quite high. That’s better odds of being killed by police than you have of winning a lot of scratch-off lottery games,” said Frank Edwards, the study leader and a sociologist at Rutgers University who co-published these findings in Proceedings of the National Academy of Sciences.

This is a reality I have to deal with. It's why I hate it when people act like police are automatically heroes. It's why I, a writer and a professor, am reluctant to sympathize with police, because too many are trigger-happy and see black skin as always guilty. I don’t call the police for help with anything, because they aren’t here to help me. In my life, police have only been good for the reports you need to accompany insurance claims.

There are officers all over the country who act like Pantaleo, who see themselves in Pantaleo, and who don’t value black life like Pantaleo. Delusional police supporters clearly think that there is nothing wrong with taking the life of an innocent black man. Presidential wannabes like Booker and De Blasio call the result of a five-year investigation — which should’ve taken two minutes and yet led to nothing more than a man losing his job — "justice," all in a nation where police killing is a leading cause of death for black men, like diabetes and high blood pressure. Black people clearly don’t matter in America.

I promote assimilation and system infiltration, but I also can’t scold the young people who refuse to vote. Look at the nothingness that our politicians are capable of saying.

Emerald Garner, Eric Garner's daughter, thanked Commissioner O'Neill for finally making the decision to fire Pantaleo, five years after her father's death. But, she pointed out, "I should not be here standing with my brother, fatherless. I should be standing here with my father. But Pantaleo took that away from me on 7/17."

To see Eric Garner’s killer not be charged, to see him keep his job for so long that many forgot about his crime in the first place, to see Freddie Gray's killers go free, on top of all of the other deaths that police were never held accountable for, and through all of that to know my tax dollars still pay police salaries, that all confirms everything I know and believe about America.

I know we don’t matter to this country. We matter to our family, to our friends, and to our community, but not to America. America proves this to us every day.