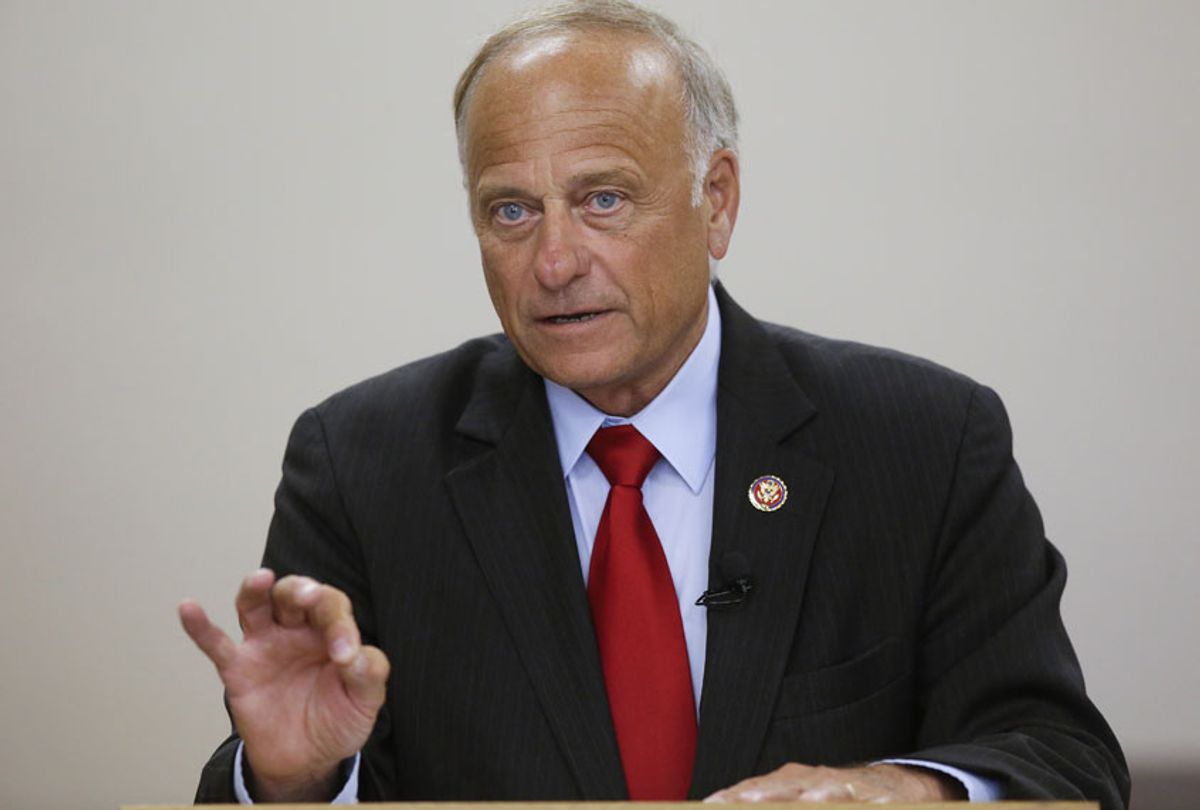 Rep. Steve King, R-Iowa, held a "No Exception to Life" press conference on Friday, where he again offered a passionate defense of his belief that abortion should be prohibited after the detection of a fetal heartbeat — even in cases of rape and incest.

Speaking at a Holiday Inn in Des Moines, Iowa, his home state, the lawmaker defended the controversial comments he made last week when he asked whether there would "be any population of the world left" if you did not count people who were "products of rape and incest."

"The misinformation bounded across the countryside," King said. "It was a misquote. That misquote was retracted. It was replaced with an accurate quote but that didn't stop the epidemic around America."

The Des Moines Register and the Associated Press did issue a correction after they published King's remarks, but his comments about rape and incest were reported accurately. The news outlets said they misquoted King when he said he knew nearly 200 people who oppose exceptions for rape and incest because they understand the fetus is not to blame for such instances. The Des Moines Register also published video of King's remarks, which he made as he defended his belief that abortion should be prohibited after the detection of a fetal heartbeat.

King also defended his remark on Friday, calling it "an objectively honest and accurate statement" that was "willfully misinterpreted."

"I care about all people and I think we should look back at our family trees and wonder. That's why I want all people to ask that question," he continued.

King also took aim at Republicans in Congress who criticized his recent remarks, arguing "those who are pro-life by conviction understand that exceptions are wrong." He argued Republicans who support abortion in the cases of rape and incest are just making a "political calculation that they need for political purposes."

King was joined on Friday by a host of anti-abortion activists, including Save the 1 president Rebecca Kiessling, who said she was conceived by rape and is an advocate against exceptions for rape and incest in anti-abortion legislation.

Others speakers included included Maggie DeWitte, who leads the group Iowans for Life; Tim Overlin, executive director of Personhood Iowa; and Tamara Scott, the national committeewoman of the Republican Party of Iowa.

The speakers also read statements from women who were conceived by rape and incest, railed against late-term abortions.

Ahead of the congressman's press conference, J.D. Scholten, a Democrat who nearly defeated King in 2018 and announced he would challenge him again in 2020, wrote on Twitter: "Really hoping Steve King's press conference today is about: helping farmers get through this crisis, holding Trump accounted for the RFS abuse, a plan to revitalize IA04 depressed rural economy or rural hospitals, final construction for I-29 in Sioux City."

King has a long and documented history of making remarks widely viewed as racist, offensive, or exemplary of white supremacists' political positions.

In the past, he has expressed support for far-right politicians, including Hungary's far-right prime minister Victor Orbán — an outspoken white nationalist who has argued for a ban of non-white immigration to his country — and the Dutch politician Geert Wilders.

King also re-tweeted a statement from well-known British Nazi sympathizer, Mark Collett, who was a subject in the 2002 documentary, "Young, Nazi and Proud." He defended his move by claiming that he did not know about Collett's affiliations.

Earlier this year, House Republican leaders stripped King of his committee assignments after he questioned how the terms "white nationalism" and "white supremacy" had become offensive.

In the wake of King's comments on banning exceptions for rape and incest, House Minority Leader Kevin McCarthy, R-Calif., and House Minority Whip Steve Scalise, R-La., said the lawmaker's remarks underscore why he had been stripped of his committee assignments earlier this year, though both stopped short of calling for further action.

"This isn't the first time I've had concerns with what Steve King has said," McCarthy said last week. "I think this just continues to show why that action was taken."

Asked last week if he believes King should step down, President Donald Trump claimed he was not familiar with "the situation."

"It looked like — I read a statement that supposedly he made. I haven't been briefed on it," the president said. "But certainly it wasn't a very good statement."