Trump may have lauded the Apollo 11 mission, but his administration has launched more than 100 attacks on science 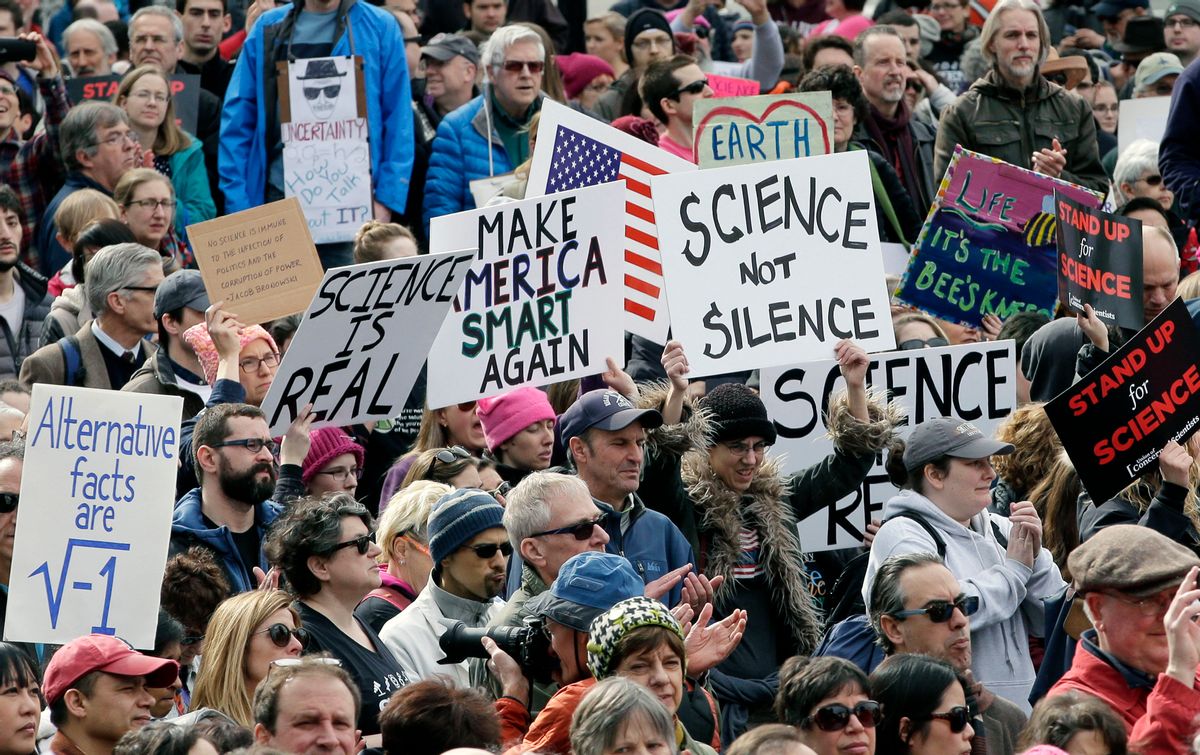 Members of the scientific community, environmental advocates, and supporters demonstrate Sunday, Feb. 19, 2017, in Boston, to call attention to what they say are the increasing threats to science and scientific research under the administration of President Donald Trump. (AP Photo/Steven Senne) (AP)
--

On July 19, President Trump hosted Apollo 11 astronauts Buzz Aldrin and Michael Collins and their families, along with the family of their deceased colleague Neil Armstrong, at a White House event to commemorate the 50th anniversary of the first manned landing on the moon.

Trump’s fractured syntax notwithstanding, the Apollo program was indeed a stunning triumph of federal science, involving more than 34,000 National Aeronautics and Space Administration employees and 375,000 industry and university contractors. It was one of many spectacular achievements by federal and federally funded scientists over the last half-century, such as the creation of the internet, fiber optics and magnetic resonance imaging technology, not to mention the role those scientists played in providing the technical underpinning for health and environmental standards that save lives and protect critical ecosystems and wildlife habitats.

Trump’s lauding of the Apollo 11 mission rang a particularly discordant note given the lengths to which his administration has gone to destroy federal science by censoring scientific findings, gagging agency scientists and fostering a hostile working environment. Since taking office, the administration has launched more than 100 attacks on science, according to my organization, the Union of Concerned Scientists — more than the George W. Bush administration amassed over its two four-year terms.

Just a day before Trump’s Apollo photo op, for example, the Environmental Protection Agency (EPA) announced it would rejectscientific evidence and the recommendation of its own staff scientists by not banning chlorpyrifos, the widely used agricultural pesticide shown to hamper childhood brain development. It was the agency’s second scientifically indefensible chemical-related decision of the year. In April, it overruled the advice of its own scientists who urged the agency to follow the example of 55 other countries in completely banning asbestos, a known carcinogen.

Today’s EPA offers a stark example of the Trump administration’s crusade to dismantle science-based agencies. Nearly 1,600 employees left the EPA during the first year and a half of the EPA administration, while only 400 were hired, according to data obtained by The Washington Post through a Freedom of Information Act request. Of 1,600 employees who left, at least 260 were scientists, 185 were “environmental protection specialists” and 106 were engineers. The total number of employees at the agency today — 14,172 — is the lowest in 30 years.

The EPA is not the only agency pushing scientists out the door. The same day the EPA made its chlorpyrifos announcement, the U.S. Department of Agriculture (USDA) announced that nearly two-thirds of 395 Washington, D.C.-based employees in its Economic Research Service, which provides analyses on a range of issues, and National Institute of Food and Agriculture, which oversees $1.7 billion in scientific funding, will quit rather than relocate to Kansas City.

The department’s dubious rationale for moving the Research Service and National Institute is placing researchers closer to farmers and cutting costs, but its ulterior motive is to hollow out their staffs, hindering their ability to carry out their missions. Mick Mulvaney, acting White House chief of staff, acknowledged as much during a speech he gave at an August 2 Republican fundraiser in South Carolina.

“You’ve heard about ‘drain the swamp.’ What you probably haven’t heard is what we are actually doing,” he said. “I don’t know if you saw the news the other day, but the USDA just tried to move, or did move, two offices out of Washington, D.C…. Guess what happened? More than half the people quit…. What a wonderful way to sort of streamline government, and do what we haven’t been able to do for a long time.”

Some members of Congress are fighting back. Late last month, for example, the House Select Committee on the Modernization of Congress — a temporary committee with an equal number of Democrats and Republicans — unanimously approved a recommendation to resurrect the Office of Technology Assessment, a congressional watchdog agency that then-House Speaker Newt Gingrich killed in the mid-1990s.

The select committee’s recommendation comes on the heels of a draft House spending bill for the 2020 fiscal year that includes $6 million to jumpstart the agency, which provided Congress with analyses on a range of topics, from acid rain to climate change to renewable energy, from 1972 to 1995.

Meanwhile, House Democrats and Republicans alike voiced their support for protecting federal science during a recent Science, Space and Technology Committee hearing on scientific integrity. Two dozen federal agencies have adopted scientific integrity policies since 2010, but they are inconsistent and difficult to enforce, so some members of Congress want to codify protections in a law.

“Allowing political power or special interests to manipulate or suppress federal science hurts, and hurts all of us,” said New York Rep. Paul Tonko at the July 17 hearing. “It leads to dirtier air, unsafe water, toxic products on our shelves, and chemicals in our homes and environment. And it has driven federal inaction in response to the growing climate crisis.”

Earlier this year, Tonko introduced the Scientific Integrity Act, which would guarantee federal scientists the right to share their findings with the public, ensure the accuracy of government science-related communications, and protect scientific research from political interference.

Federal science has taken an unprecedented beating during the Trump administration and remains a long way from its glory days half a century ago when it landed men on the moon. Tonko recognizes that protecting scientific integrity is a critical first step to rebuilding American scientific enterprise and that it deserves bipartisan support.

“Scientific integrity is a longstanding concern that transcends any one party or political administration,” Tonko said. “The abuses directed by this president and his top officials have brought a new urgency to the issue, but the fact remains whether a Democrat or Republican sits in the [House] speaker’s chair or the Oval Office, we need strong scientific integrity policies.”