Products won exemptions for the vague “health, safety, national security and other factors." 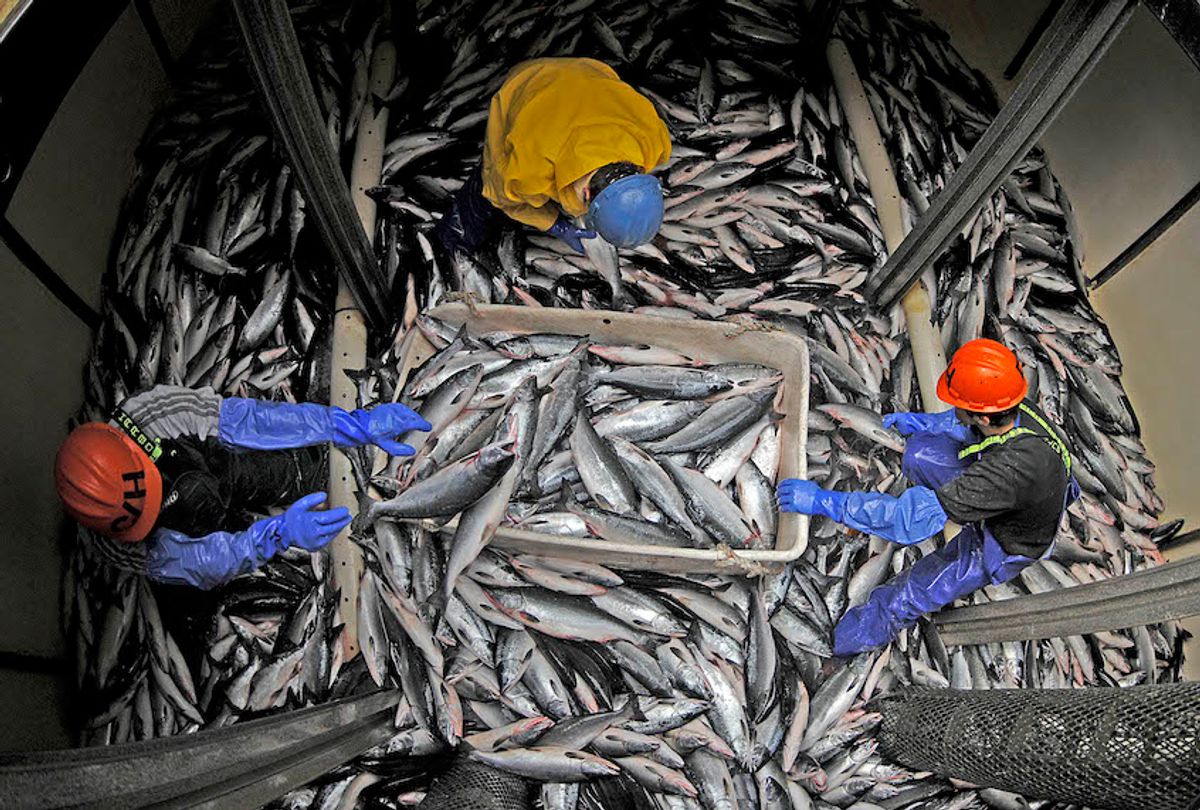 Pink salmon are unloaded from a hold of a salmon seiner in Southeast Alaska Thursday August 7. Pink salmon (humpys) are finally starting to show up in Southeast Alaska waters but salmon seiners and processors say the season is far below predicted catch numbers. While 44,885,000 pinks were harvested in 2007, the number is just approaching the 1 million mark for 2008. Alaska Department Of Fish & Game biologists say the pinks are deep due to cold water and hopefully both the south and the north runs will hit in mid August. (Klas Stolpe/AP Photo)
--

President Donald Trump’s aggressive trade brinksmanship has split the American economy into new castes of winners and losers, with few consistent criteria defining who ends up in which group — as illustrated by the $2 billion in products that won exemptions last week from a new round of China tariffs.

Bibles and other religious texts got a pass after U.S. publishers and Christian groups argued that tariffs would infringe upon the freedom to worship around the globe.

Salmon and cod — caught in Alaska and processed in China — won an exemption after the state’s Republican senators successfully argued that tariffs would pose an “economic security” risk to Alaska’s fishing industry.

Chemicals used in fracking escaped tariffs after the oil and gas industry argued that taxing them would threaten America’s “energy dominance.”

The Office of the U.S. Trade Representative carved out those products from an original list of $300 billion based on what it called “health, safety, national security and other factors.” About half of the original list was delayed until December in order to get past the holiday season, but after that, importers will pay 10% of the value of whatever they bring in from China.

Although the companies that won relief may not be markedly different than the interests favored by other Republican administrations, this cycle of tariffs and exemptions is happening faster and at a larger scale than any remotely similar exercise in the past, giving far more companies reason to protest.

Take religious texts like the Bible and the Quran, which were the only kind of publication exempted by trade regulators. Other written works, from pulp fiction to textbooks, were denied clemency.

In the weeks following USTR’s announcement of a new batch of tariffs ostensibly justified by China’s violation of intellectual property law — this one covering a huge swath of finished goods, since duties had already been assessed on most kinds of intermediate materials — Christian publishers and religious groups made their case for a reprieve.

In letters and testimony, they argued that China had become America’s primary source of Bibles because of its unparalleled proficiency in printing the 800,000-word text, which requires thinner paper and often more ornate, hand-stitched bindings. The U.S. imported almost $140 million worth of religious texts in 2018, 67.3% of which came from China, according to Panjiva, the supply-chain research unit at S&P Global Market Intelligence, a commodities data provider. The world’s largest producer of Bibles, China’s Amity Printing, said it produced 14.15 million copies in 2017.

Those volumes are already more expensive than the average beach read. Biblica, a nonprofit that gives Bibles away around the world, testified that a tariff on religious books would “dramatically affect” the number of Bibles it was able to donate, “impacting the religious freedom of individuals in countries where Bible access is limited and often nonexistent.”

Russell Moore, president of the Ethics and Religious Liberty Commission of the 15.2 million member Southern Baptist Convention, wrote that a tariff on Bibles would require “higher prices incompatible with the high and consistent demand for Bibles in the United States” and affect “all Christians’ ability to exercise their religious freedom in the United States.”

The USTR’s decision wasn’t all good news for churches and religious publishers, however. They produce and consume plenty of religious-themed books that wouldn’t qualify under a strict interpretation of the exemption. Besides, most of them urged a return to the long-standing practice of avoiding burdensome taxation on all publications on First Amendment grounds.

“All books should really be exempt, because that’s been the tradition of the United States,” said Stan Jantz, executive director of the Evangelical Christian Publishers Association. “It was never an intention to only be the Bibles. If anything, I would hope the Bible would help them open up and see the value of all books.”

That was also the hope of independent publishers and bookstores, which already operate on thin margins. Dan Reynolds, CEO of Workman Publishing, which has several nonfiction imprints as well as a line of children’s books, says the focus on Bibles was part of a conscious approach.

“We strategized when this started to happen about which parts of our business would get the attention of the administration, as well as which products that are reliant on Chinese production, with the hope that by making our case with Bibles and children’s books primarily, that that would make all books exempted,” Reynolds said in an interview. “So we’re partially victorious, but it didn’t help all the other categories.”

The tariffs for children’s books were pushed to December, but Reynolds isn’t sure what his company will do after that. Chinese printers are especially good at producing affordable children’s books with all kinds of bells and whistles, like pop-ups and textures. The fixed budgets of schools and libraries won’t expand to pay for tariffs, so Reynolds said he’ll probably sell fewer books. And if he has to move production out of China, he said, he’ll keep costs down by dialing back some of the fun features.

The situation is perhaps more difficult for small bookstores, which don’t have the cash on hand — or the space — to stock up on inventory before the year-end holidays. Jamie Fiocco, president of the American Booksellers Association and owner of Flyleaf Books in Chapel Hill, North Carolina, is resigned to the fact that religious works were protected while others were not.

“I think it’s a statement about the environment we’re working in these days,” Fiocco said.

Books aren’t the only product where the USTR has had to make tough choices about which industries to favor and which to leave hanging. (The agency did not respond to a request for further explanation of why it exempted the products it did.)

The roughly two dozen product categories that escaped tariffs included frozen cod, salmon and haddock, which are often harvested in Alaska and sent to China for processing into fillets and nuggets that are sold in grocery stores and restaurants. A tariff on those reimports would have hurt the fishing industry. Under pressure from Alaska’s congressional delegation, they had been dropped from previous rounds of duties but ended up included again in the fourth batch, which meant having the argument all over again.

A joint letter from Alaska Sens. Lisa Murkowski and Dan Sullivan and Rep. Don Young referred to their “many discussions” with U.S. Trade Representative Robert Lighthizer, and it warned him that failing to exempt salmon and cod would carry consequences. “You risk losing critical congressional support if your actions end up having the result of targeting and harming some of the very Americans we know you want to help,” they wrote.

In response to a question about what seafood tariffs had to do with health, safety or national security, Murkowski spokeswoman Hannah Ray highlighted the part of the USTR notice that said “other factors” could come into play.

“Beyond those explicitly listed, there are additional factors that USTR could consider in deciding to remove items from its final list,” Ray wrote. “This administration broadly interprets ‘national security’ to include domestic economic security. Senator Murkowski shares the administration’s desire to ensure fair and reciprocal trade.”

The lawmakers weren’t against all fish tariffs, however. They advocated for continuing to include pollock, a divisive issue in the seafood industry. There are more American companies that process pollock and also more Russian pollock that comes into the U.S. after processing in China, creating a stronger domestic lobby for taxing imports. But resellers and restaurant chains complain that all tariffs make food more expensive — in this case, pollock fish fingers.

“Compared to the range of outcomes that we could’ve had, it’s certainly better, but it’s still overall a very poor outcome in my opinion,” said Matt Fass, president of the Williamsburg, Virginia-based distributor Maritime Products International. “A couple of the species have been exempted, which is a good thing. The largest volume species has not been — that’s pollock. ... Everything is immediately higher priced when the tariffs hit.”

Beyond fish and Bibles, USTR also spared several types of minerals with defense applications that would meet the “national security” criterion.

That’s also convenient for American industrial conglomerates. For example, zirconium goes into nuclear fuel rods used in the Navy’s submarines and aircraft carriers, according to testimony from Allegheny Technologies and BWX Technologies, which supply zirconium to the military. But it’s also used for civilian airplanes built by aerospace companies.

Other exempted products seem to only be priorities for powerful industries. Aluminum oxide, for example, is critical for steel manufacturers, who had been protected by earlier rounds of tariffs on imported steel but could have been hurt by subsequent duties on chemicals they need in order to produce domestic steel. Various forms of barium are used as a stabilizing additive to fracking fluids, and companies including the oil field services firm Halliburton testified that using alternative products would decrease drilling productivity. Fifty-three-foot shipping containers are essential for trucking and rail transportation, and big companies like J.B Hunt and CSX said that tariffing them would make all kinds of freight shipments more expensive.

No industry, however, got everything that it wanted in the exemptions. Take the juvenile products industry: Child car seats were waved through, but cribs and baby gates stayed on the list. Or oil and gas: Despite the reprieve on barium, tariffs remain in place on more than 100 industrial components used in both offshore and surface drilling, and the steel tariffs have pushed costs higher on everything.

“U.S. energy leadership and global competitiveness are also threatened by the ongoing trade dispute with China as U.S. natural gas and oil exports serve as targets for retaliation,” a spokeswoman for the American Petroleum Institute said in an emailed statement.

And of course, all of this could change in a flash. Previously exempted categories could be put on yet another list, as several were in this latest round, leaving business heads spinning.

“It just has gone so quickly, and it’s so volatile,” said Angela Bole, CEO of the Independent Book Publishers Association. “Everything was thrown in. It was like dropping a house on a fly.”

Haru Coryne contributed to this report.

ProPublica is a nonprofit newsroom that investigates abuses of power. Sign up for ProPublica’s Big Story newsletter to receive stories like this one in your inbox as soon as they are published.