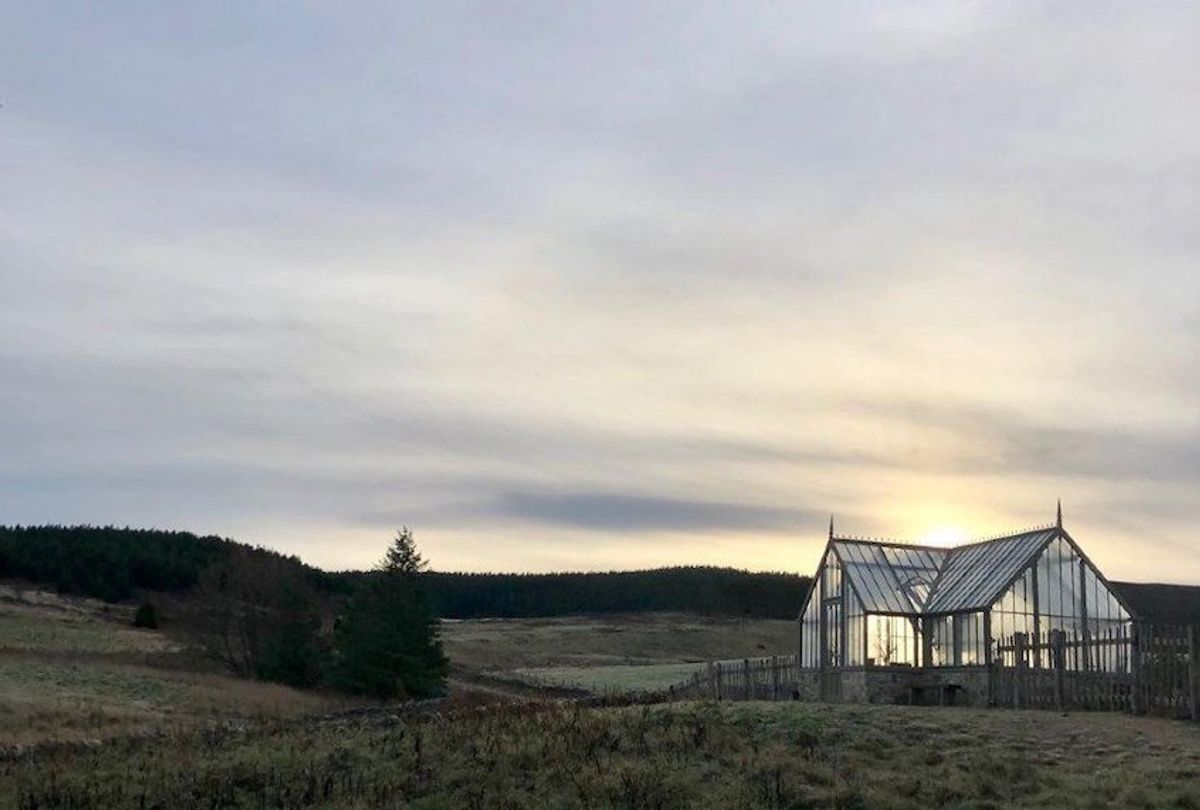 Twilight in the Highlands. (Photo courtesy of Killiehuntly Farmhouse.)
--

Have an appetite for rollicking green hills, covetable cottages, tidy tweeds, and single malts? Natty Fathom contributor Darrell Hartman has his fill on a five-day drive through Northern Scotland.

SCOTTISH HIGHLANDS – I loathe golf. I can live without tartan. Still, I love things Scottish. The gamekeeper look (Shetland sweaters, tattersall shirts, piles of Harris tweed) is a personal favorite, and if Heaven doesn’t have single malt and salmon fishing then I’m not sure it’s worth the price of admission.

I’m lucky to have a wife, Dana, who tolerates some of these preferences of mine and actively shares in others. And so, as we prepared to go to London for a friend’s 30th birthday party, she was more than okay with us tacking on a five-day drive through northern Scotland and calling it a second honeymoon.

We arrived in Inverness, a river town of about 45,000 people. Somehow we scored a window table for two at Castle Tavern, which overlooks the River Ness and had a cozier pub scene than we could have asked for late on a Saturday afternoon, even if the fish and chips were nothing special.

Truth be told, I was impatient to plant my feet on Highland soil — and by the middle of the next morning, we were doing just that: trudging up a 2,800-foot hill called Morrone at the southern end of Cairngorms National Park. The brushy first mile or so gave way to chocolate-colored tundra above tree line, where we overtook a gentleman who must have been in his mid-eighties, bent into the wind and walking with the careful determination of a tortoise en route to water. 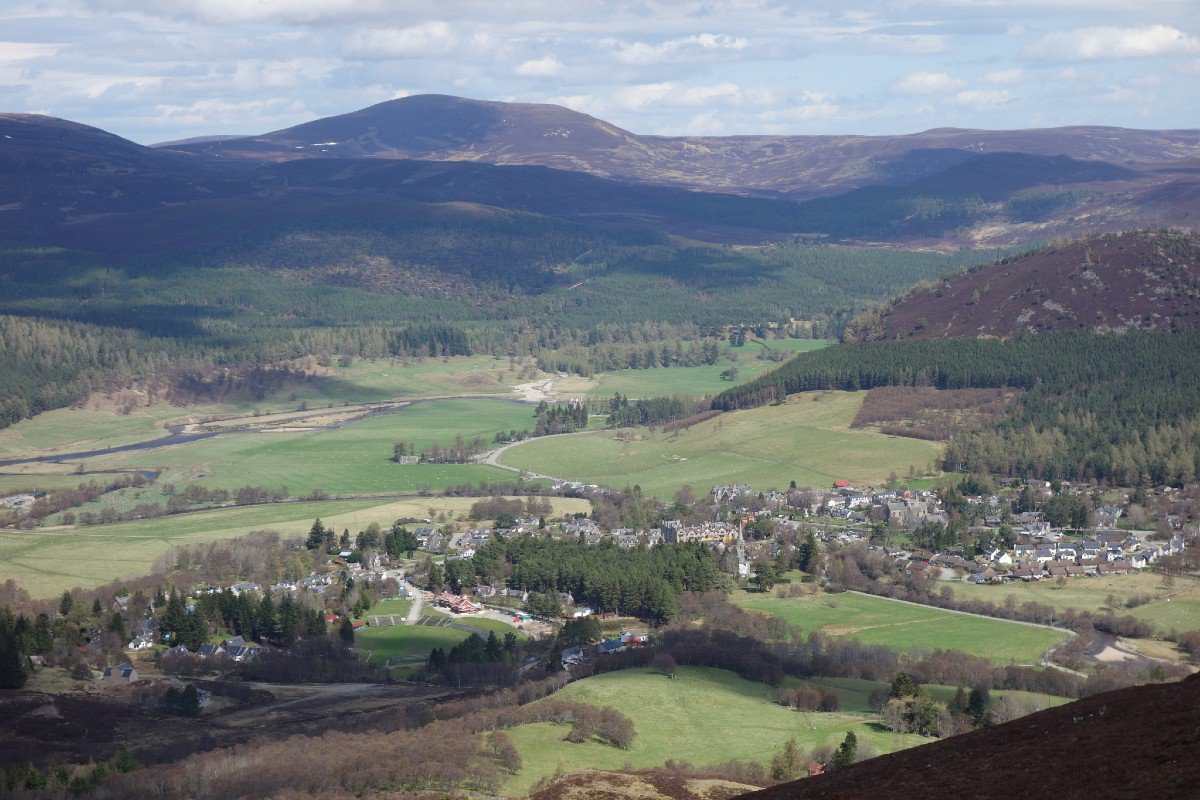 From the top of Morrone. Photo by Dana Drori. 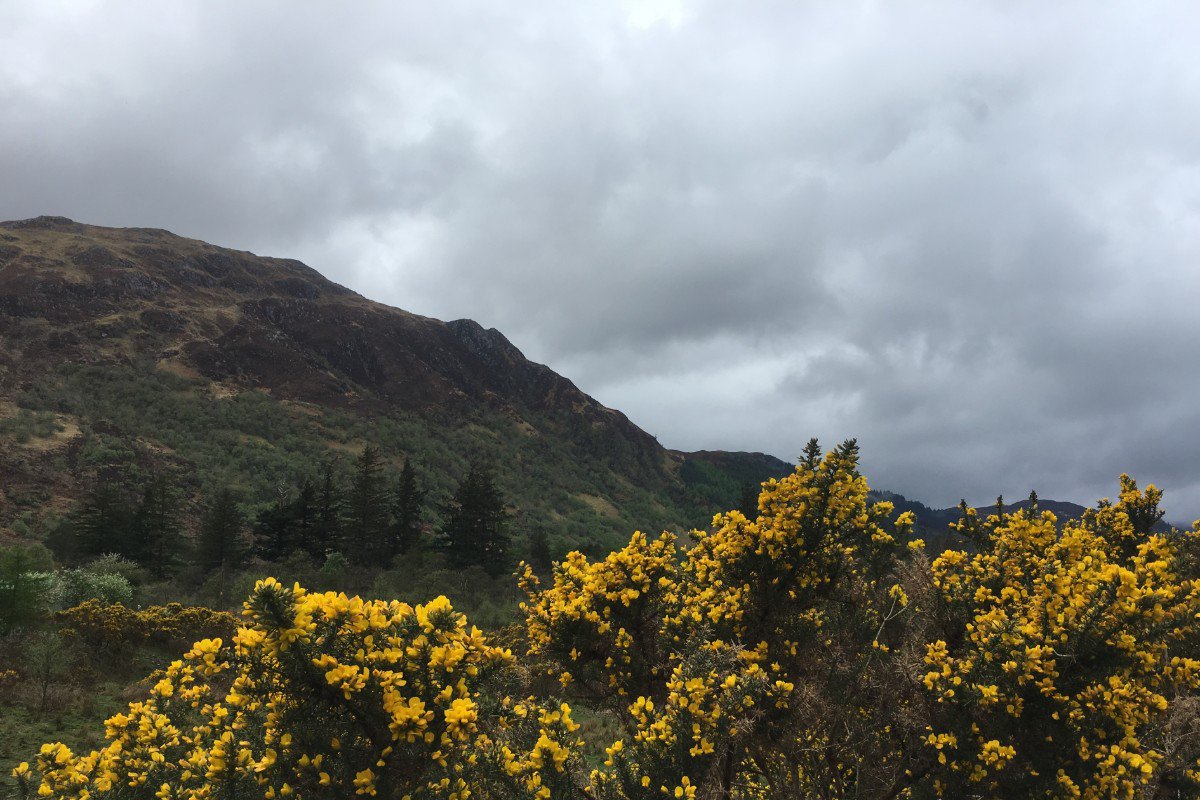 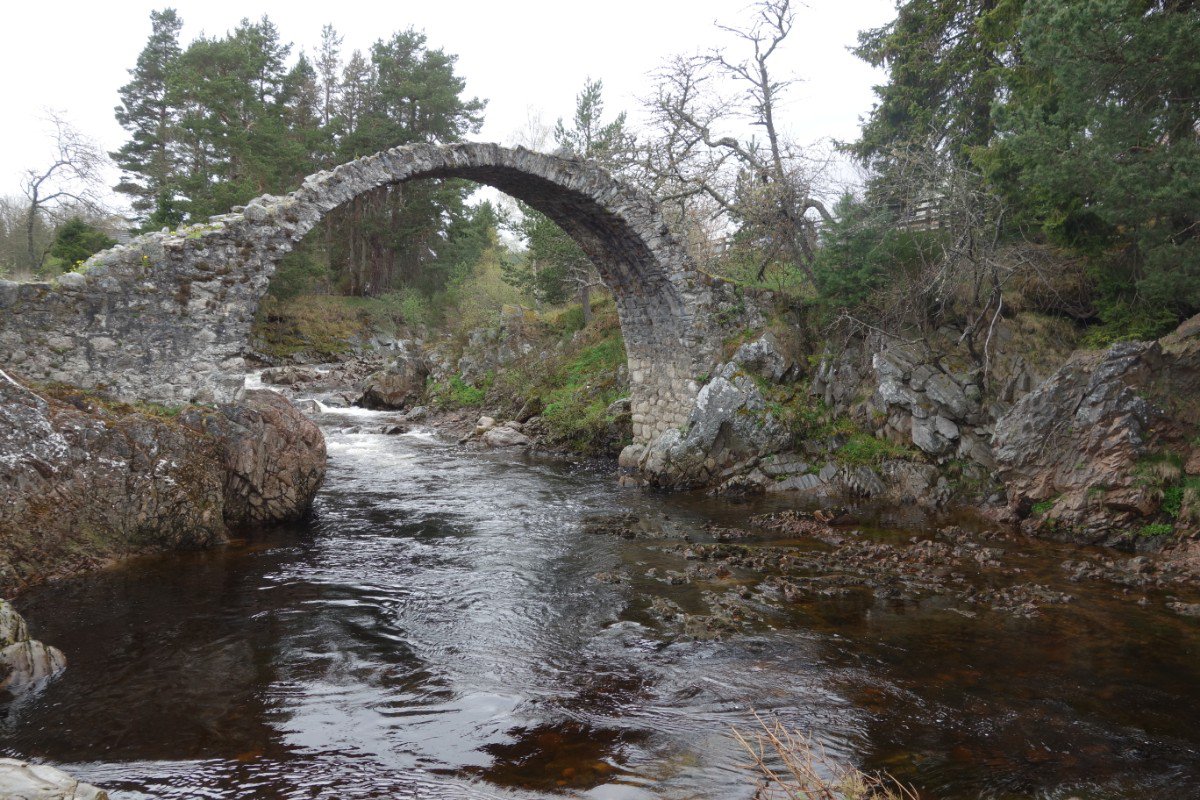 We plopped down in the lee of a radio tower at the top, where several pensioners were enjoying a break in the sun. We were somewhat amazed to find ourselves the youngest people on the trail by 20 or 30 years. It occurred to us that a country of walkers is a fine country to grow old in. We trundled back down, past stream-side cottages and into the picturesque town of Braeamar, where we had cider and stout and a plate of cheese at a timeless sort of place called Gordon’s Tea Room.

It was an hour’s scenic drive along the park’s single-lane “snow roads” to our hotel. The Muckrach is at the northern end of the Cairngorms. It’s a nice-looking conversion of a 19th-century shooting lodge, kitted out with plaid tub chairs and Chesterfield couches and a pair of resident Highland cattle named Dougal and Hamish. But when I asked the young bartender about local whisky, he suggested Glenlivet and Macallan. True, these are Speyside malts. But imagine being in Jalisco, Mexico’s tequila heartland, and having your waiter enthusiastically recommend Patrón.

I used to enjoy distillery tours. Now, having done a half-dozen or so in my lifetime, they rank as my least favorite way of earning a dram. So instead, we went thrifting in tidy Grantown-on-Spey. Dana bought what was presumably once someone’s grandmother’s silk scarf; almost too perfectly, I scored an aluminum flask wrapped in Harris tweed. At a high-end provisioner called Elephants In The Pantry, we found a suitably unknown Speyside malt to fill it with. 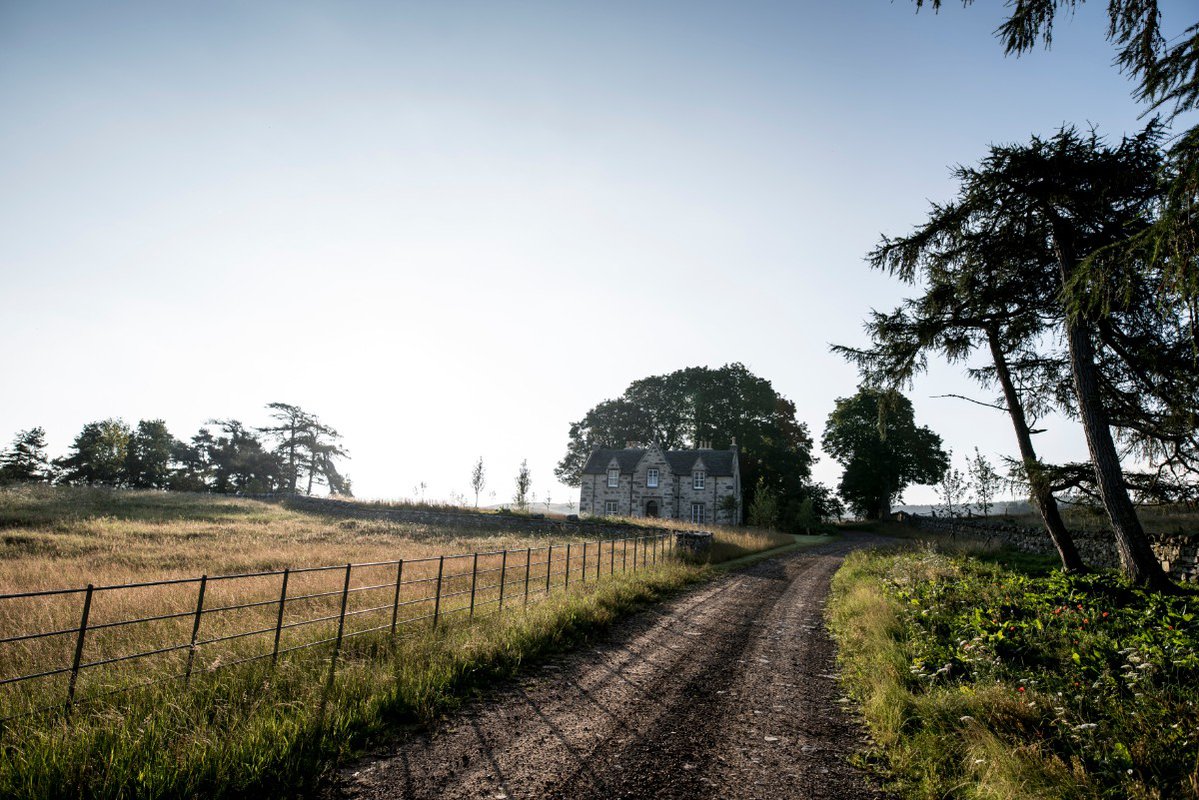 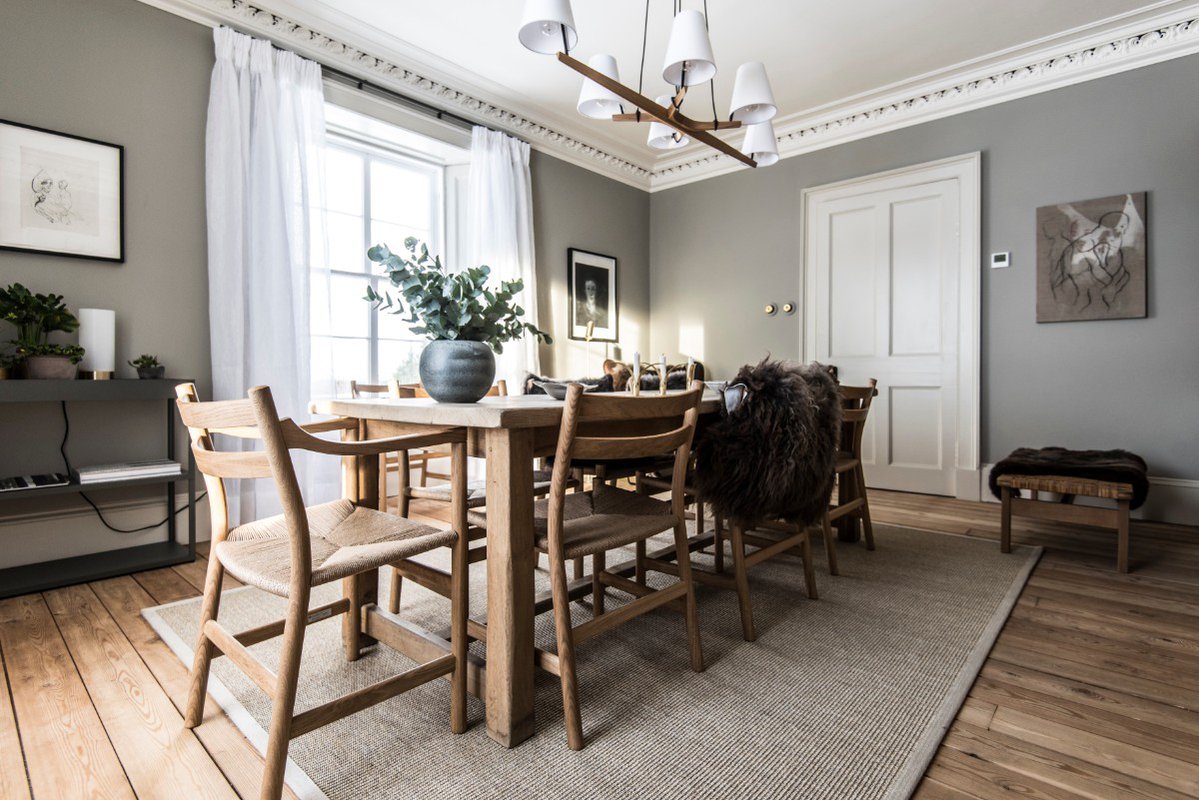 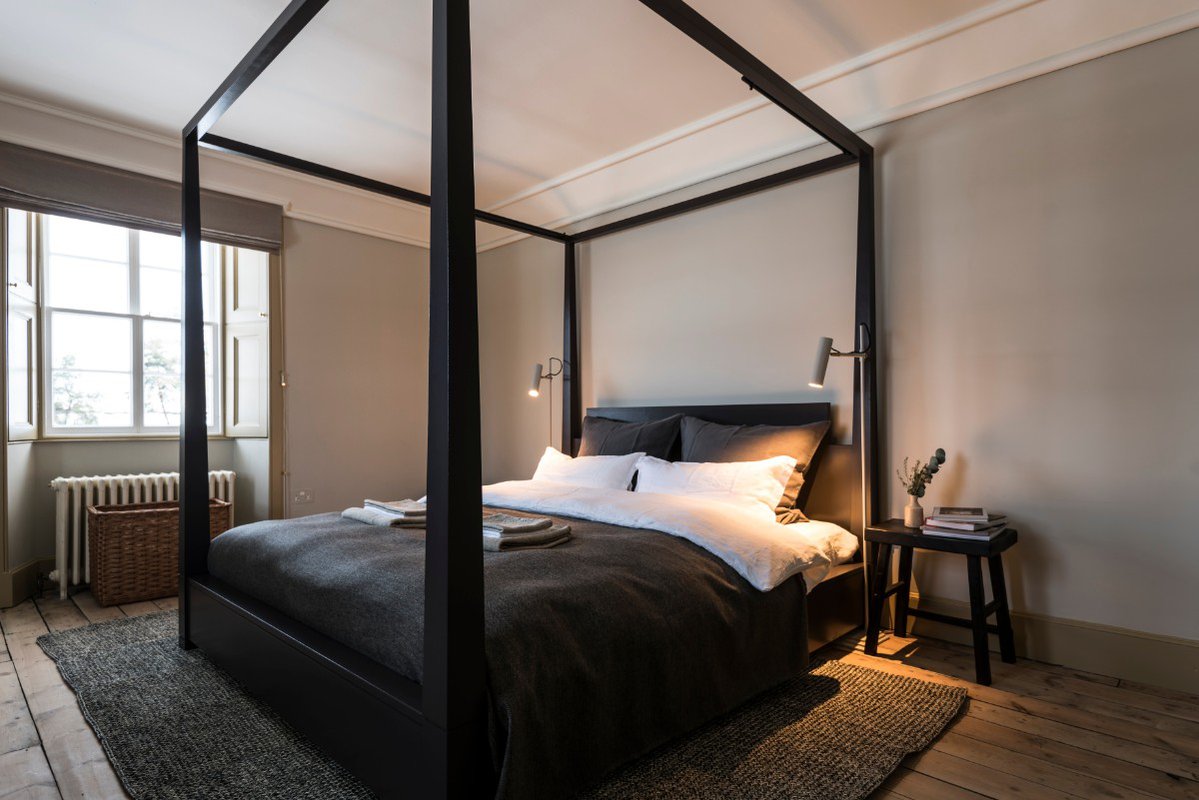 We had high hopes for our lodgings for that night, Killiehuntly, a beautifully restored 1850’s farmhouse on the western side of Cairngorms park. Researching it online, Dana and I had swooned at photos of its fleecy sheepskins, plank floors, and bread-and-cream palette. But the Instagram images hardly prepared us for the baking smells. We walked in to find the caretaker, a young American named Jenny, pulling a lemon-drizzle cake out of the oven. It was all pretty overwhelming, in the best of ways.

We dropped our bags, had fresh cake and tea, and borrowed a pair of fat-tire bikes to explore the farming estate’s 4,000 acres. Rarely have I seen miles of stone wall so perfect. A schvitz in the sauna yurt and a drink in the drawing room rounded out the pre-dinner routine. The cook, Verity, served new turnips in butter and a delicious roast lamb au jus. With us at the farmhouse table were three other couples: one English, one Australian, and one German, each at a different stage of middle age and equally happy to be there.

When they’re not on duty at Killiehuntly, Jenny and Verity live in a seaside town called Glenelg. We took their advice and passed through it en route to Isle of Skye, a drive remarkable for its fjord-like lochs and eyefuls of saffron-colored gorse. With this route we bypassed the popular Skye Bridge, which has linked the island to the mainland since 1995, and arrived via old-fashioned instead. Our boxy little Vauxhall rental was one of two cars on it. 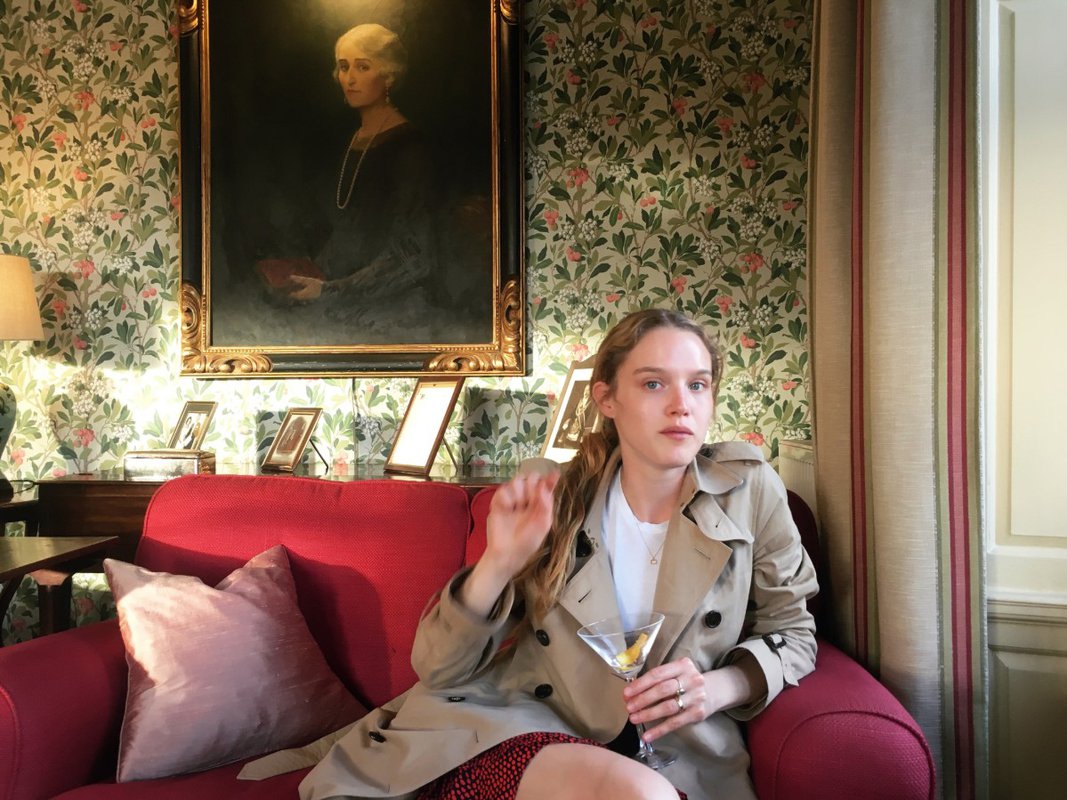 The author's wife, tippling in the parlor at Kinloch Lodge. Photo by Darrell Hartman. 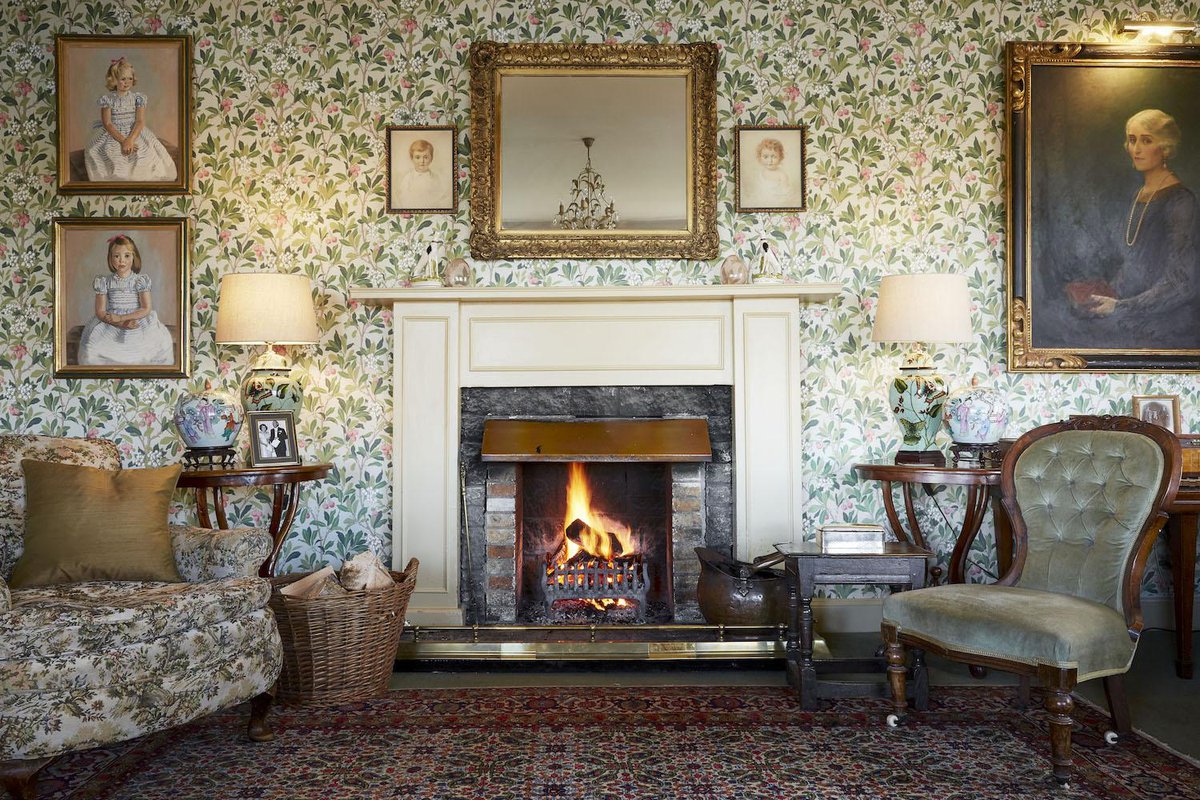 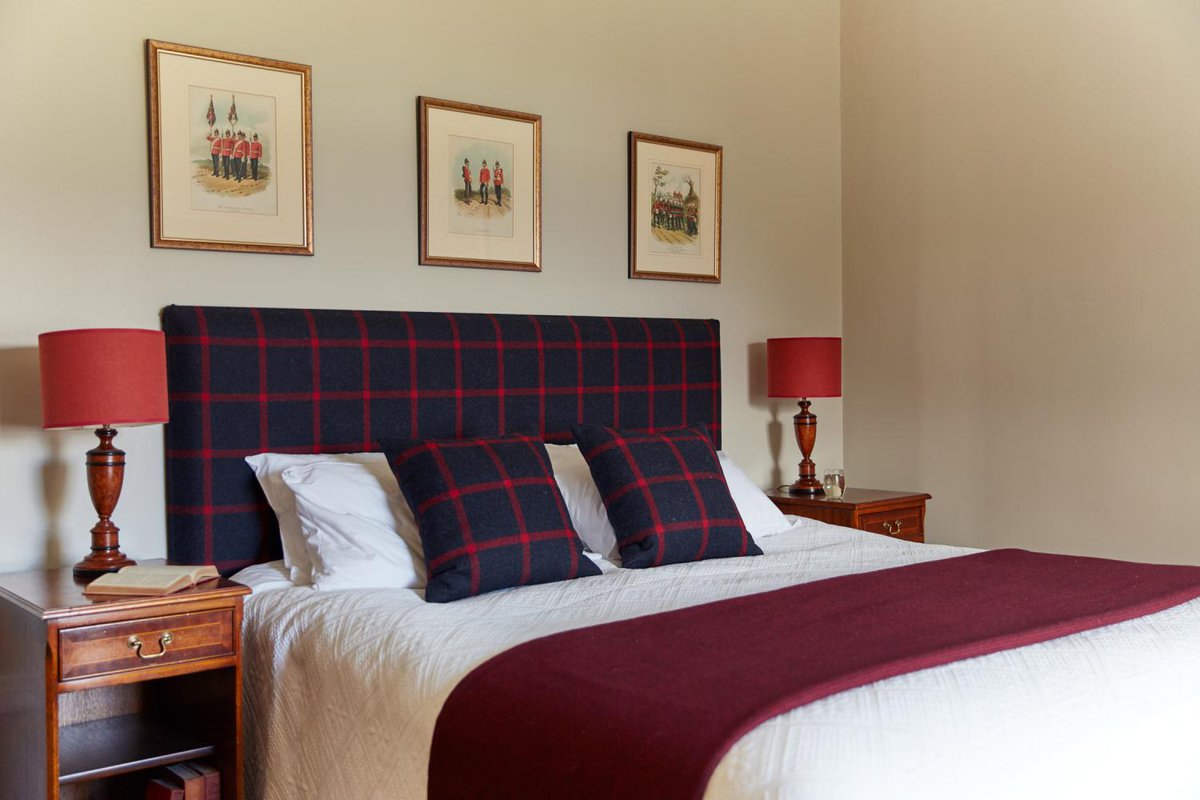 Scottish dreams are made of these. Photo courtesy of Kinloch Lodge.

The ghillie (Scottish for guide) at Kinloch Lodge, our hotel on Skye, was waiting for us when we got there. His name was Mitch, and he looked glorious in moss-toned tweeds and tattersall. Over the next hour, this stylish ex-military man walked us through the vicinity, explaining the many uses of the rain-soaked local vegetation. There’s cushiony silverweed, a moleskin alternative for lining boots, and deergrass, which makes for a comfortable sleeping mat. Kinloch’s bartenders use eucalyptus-like bog myrtle in cocktails and sometimes also scurvy grass, which has a peppery bite and a dose of Vitamin C. Who am I kidding? It’s this type of foraging, not the survival stuff, that’s more relevant to me.

Kinloch belongs to members of the MacDonald clan, which used to avail itself of the place as a shooting lodge. The decor is what you might expect of aristocratic Scottish owners, which was a nice contrast to Killiehuntly’s rustic Nordic chic.

Dana had made it a trip goal to avoid even a mention of haggis or black pudding, and it looked like she’d pull it off. In a portrait-lined dining room where the staff is far more buttoned-up than the clientele, Brazilian-born Chef Marcello Tully sweetens up Scottish fish and game with flavors of lime, coconut, parsnip, and Pertshire honey mousse. (For a look at some of his recipes, go here.)

For breakfast the next morning I ordered the kedgeree, a smoked-fish risotto of sorts that I’d had only a few times before. It came on a fragrant brick of saffron rice, topped with flecks of parsley and a poached egg. Dana ordered the porridge, which Tully makes with cinnamon, milk, and sugar, not the salt and water of austere Scottish tradition. This is not oatmeal that you would want to make a habit of. Dana declared it the best she’d ever had. 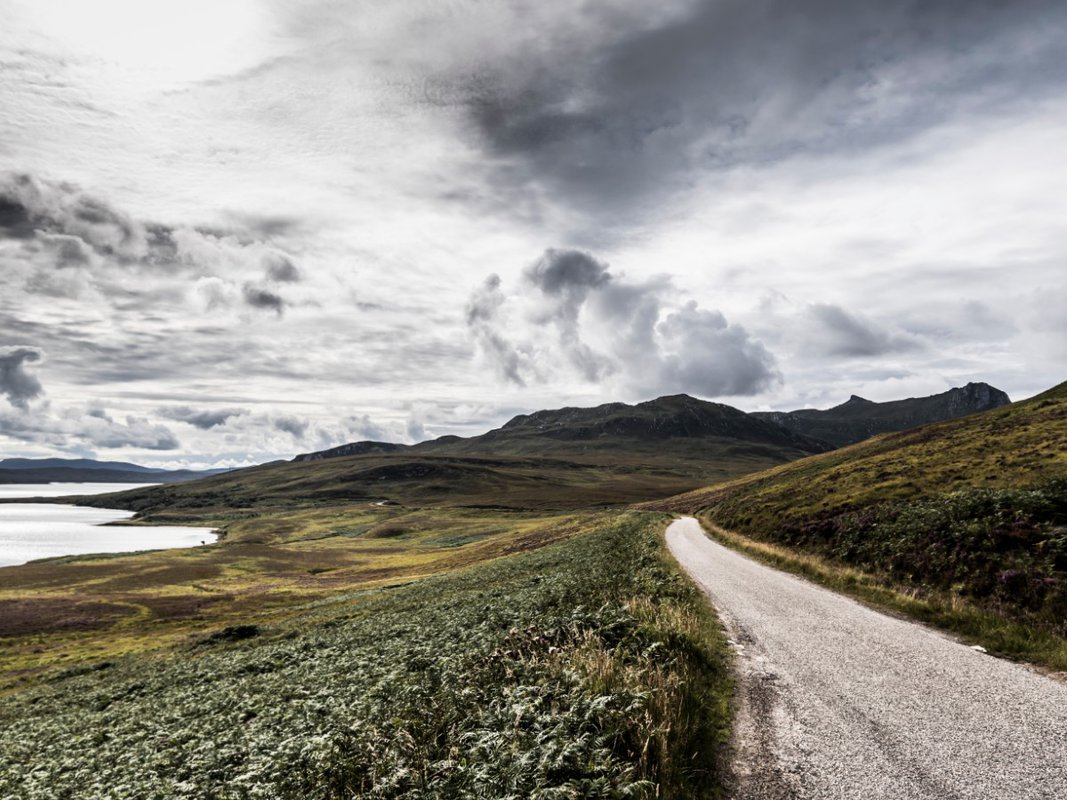 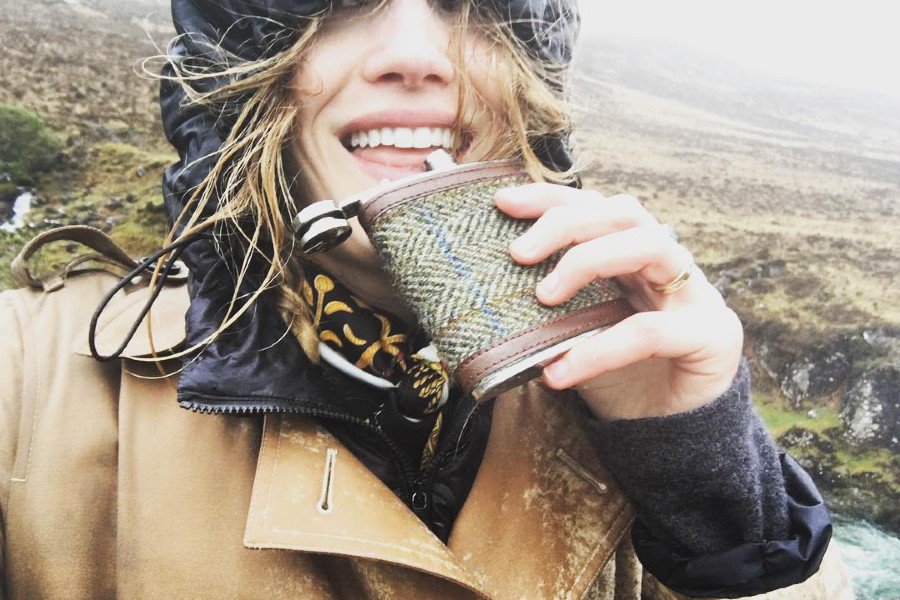 Fortifying with the amber stuff. Photo by Darrell Hartman. 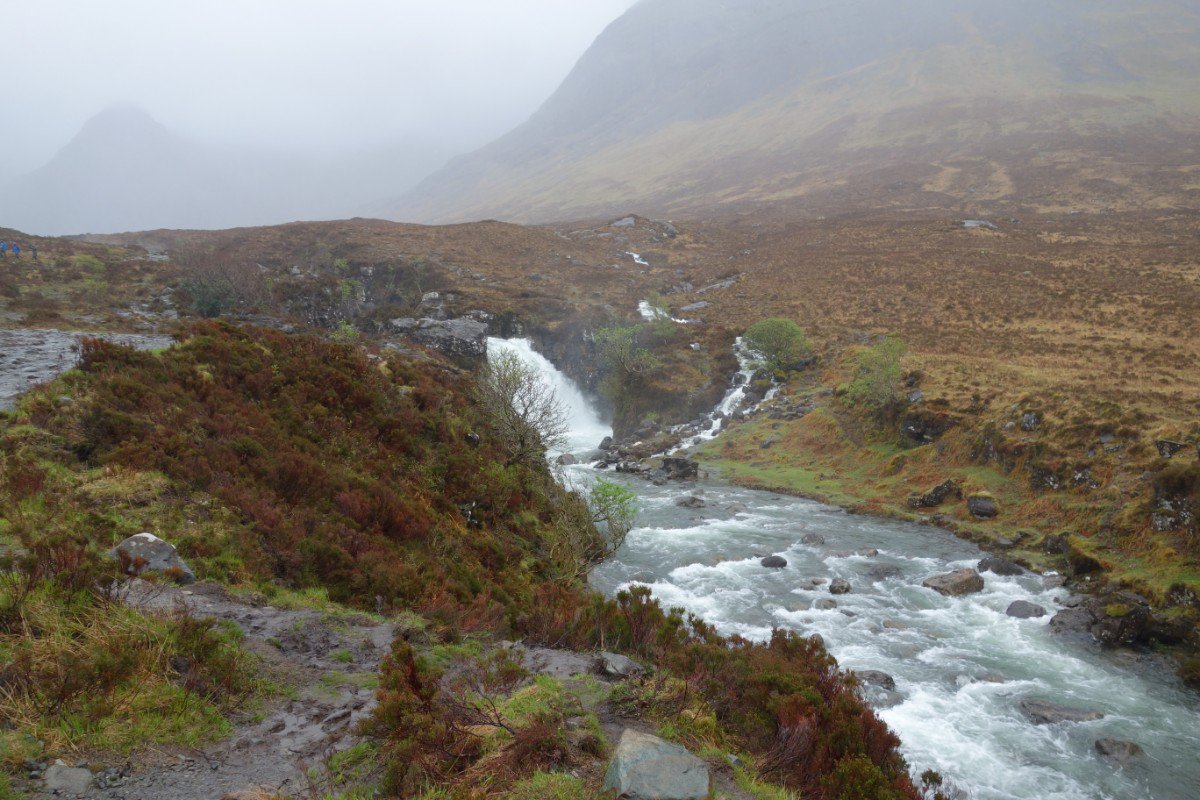 Feeling a bit heavy, we drove to Carbost, where the rain had forced everyone into either the Talisker Distillery (stunning location, spacious bathrooms) or the Oyster Shed, where we huddled around an upright whisky barrel and sampled fruits de mer from the half-shell.

The other totally entrancing photos we’d looked at while planning the trip were of Skye’s Fairy Pools, a tumbling natural sequence of small waterfalls. We decided to brave the elements and make the short, stream-hopping hike from the road.

Why be a wuss about the outdoor conditions in Scotland? Tomorrow we’d be leaving; it was now or never. We packed the tweed flask and strode into the rain. I really do love most things Scottish — on some days, even the weather.