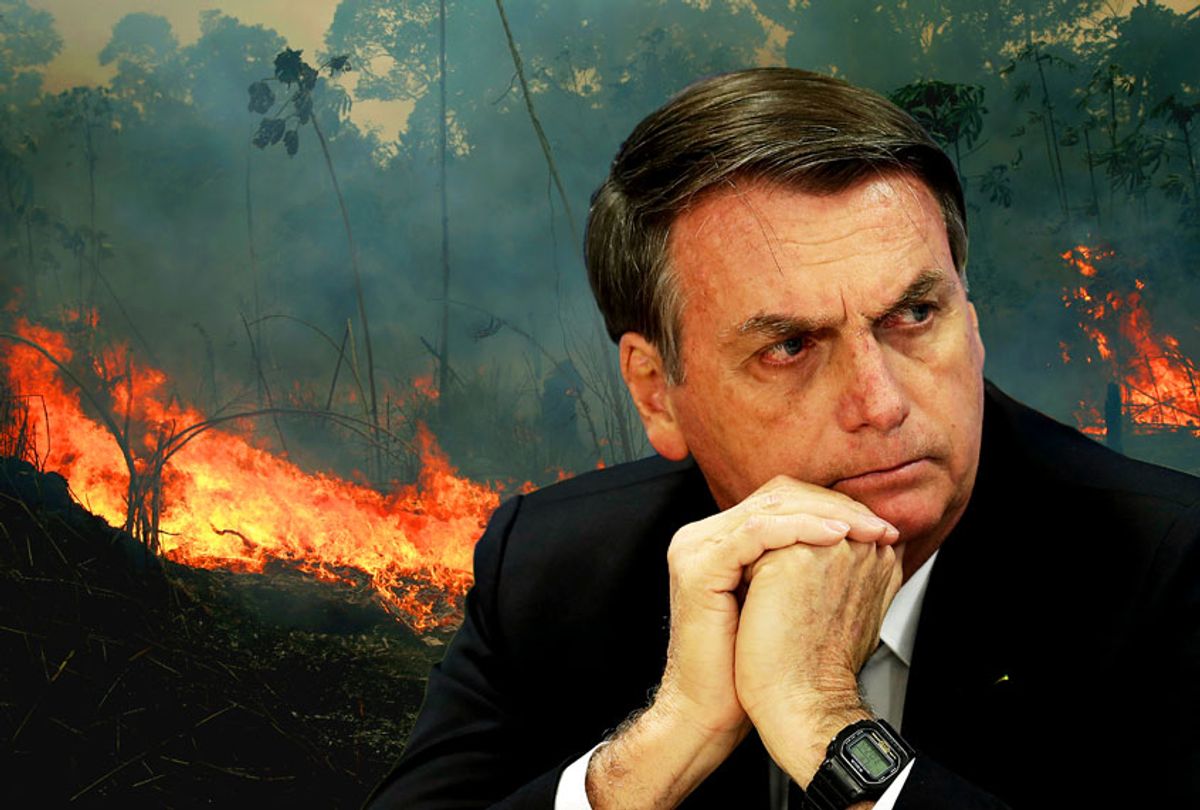 "Thank you, President @realDonald Trump. We're fighting the wildfires with great success," the populist leader, nicknamed "Trump of the Tropics," tweeted Tuesday. "Brazil is and will always be an international reference in sustainable development. The fake news campaign built against our sovereignty will not work. The US can always count on Brazil."

Earlier on Tuesday, Trump applauded the populist leader for "working very hard on the Amazon fires and in all respects doing a great job for the people of Brazil."

"He and his country have the full and complete support of the USA!" Trump added.

The exchange between the two world leaders came hours after Bolsonaro reversed course and said he would consider accepting a $20 million aid package from the Group of Seven nations (G-7) to help fight the wildfires. But Bolsonaro noted he won’t make a final decision until French President Emmanuel Macron apologized for his alleged "insults,” which Bolsonaro views as an attack on Brazil's sovereignty.

"First of all, Macron has to withdraw his insults. He called me a liar," Bolsonaro told reporters. "Before speaking or accepting from France, even if it comes from the best possible intentions, he must retract his words."

Bolsonaro's comments marked the latest escalation in the recent public war of words between the two leaders, which has come to the fore as the world's largest rain forest continues to burn at record rates.

Macron threatened last week to block a free-trade agreement between the European Union and South America, claiming that Bolsonaro had lied to him about his commitment to tackling climate change. Over the weekend, Bolsonaro appeared to mock the physical appearance of Macron's wife, Brigitte.

Earlier, Brazilian officials slammed the offer, with Bolsonaro's chief of staff, Onyx Lorenzoni, telling the nation's news outlet G1, "We appreciate it, but maybe these resources would be put to better use reforesting Europe."

"Macron can't even prevent a foreseeable fire in a church that is a world heritage site, and he wants to give us lessons for our country?" Lorenzoni added, referring to the massive blaze that damaged the Notre Dame Cathedral in Paris earlier this year.

That same day, Macron said an international statute protecting the forest would be "a real possibility if a sovereign state took concrete actions that clearly went against the interest of the planet."

"The challenge when it comes to climate is such that nobody can say, 'It is not my problem,'" he said, according to the Washington Post.

Bolsonaro, who took office in January, has faced mounting scrutiny in recent days for scaling back environmental protections which have paved the way for the illegal clearing of forests in favor of cattle farming, mining and agriculture. .Deforestation and wildfires have surged since his inauguration.

Bolsonaro, who like Trump is a climate change skeptic, has pushed back against the backlash, arguing that the international condemnations of his government reflect a "colonialist mentality."

"We cannot accept that a president, Macron, issues inappropriate and gratuitous attacks against the Amazon," he tweeted. "Nor that he disguises his intentions behind an 'alliance' of the G-7 countries to 'save' the Amazon, as if it were a colony or no man's land."

Last week, Bolsonaro called non-governmental organizations "the biggest suspects" in the wildfires, although he provided no evidence for the claim.

"The fire was started, it seemed, in strategic locations,” Bolsonaro told reporters at the time. "There are images of the entire Amazon. How can that be? Everything indicates that people went there to film and then to set fires. That is my feeling."