With deep-fried fake chicken, can Beyond break the link between health food and vegetarianism?

Can a marketing strategy that defies everything we know about consumer product marketing work? It's doubtful 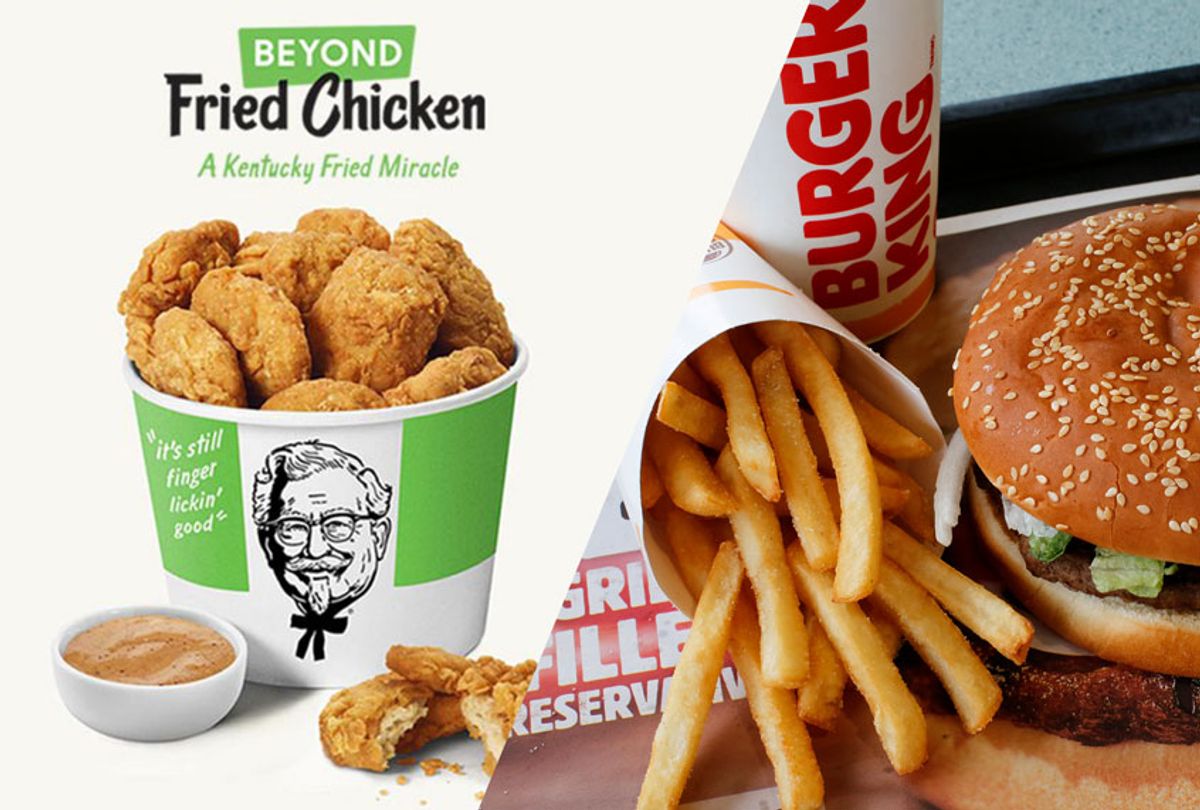 Beyond Meat, the company which introduced a veggie burger that tastes like real beef, has made a mission out of trying to remake public perceptions of vegetarian food. With its Beyond Burger, it set out to change the notion that vegetarian food is only for vegetarians — or that it's only a weak imitation of meat. Now, it appears that Beyond has moved to the next level: ending the association of vegetarian food with healthiness.

It was announced this week that KFC will begin testing "Beyond Fried Chicken" at a restaurant outside of Atlanta. The move indicates a total break with the long-standing associations between health food and vegetarianism. No one is under the impression that the health downsides associated with fried chicken come from the actual chicken part, and it's unlikely anyone is going to mistake deep-fried fake meat for a health food.

The announcement suggests that Beyond is ready to tackle what makes a food "good" versus what makes a food "bad.” Can Beyond really get Americans to rethink how we imagine food not just as an individual choice but in terms of the greater good? And can it really accomplish that through fast food restaurants, such as Burger King and KFC, which epitomize the individualistic, consumerist culture that capitalism creates?

Despite heaps of academic-style analysis and criticism of the American tendency to categorize foods into categories of "good" and "bad," those age-old colloquialisms show no sign of losing steam. Nearly all of us understand the basic — and very individualistic — parameters of what makes a food "good" or "bad.” "Good" food is low in calories, while "bad" food is the opposite.

Certainly, other qualities of virtue and vice become attached to these concepts of "good" or "bad" food. Unprocessed, organic, home-cooked, fresh — and yes, vegetarian — are qualities associated with "good" foods. Meanwhile, ultra-processed foods that include bread or meat are viewed as "bad."

However, these labels always come back to a food's caloric content. If you want to lower your calorie count, especially if you want food to taste good, eating whole foods cooked at home and purchased from a farmer's market is a better gamble than driving to KFC.  Vegetarianism has a long association, whether earned or not, with dieting. And there are a lot of reasons that women are exponentially more likely to be vegetarian or vegan. At the top of the list, whether we admit it or not, is the perception that not eating meat gives you an acceptable way to decline to eat high-calorie foods in social settings.

Not surprisingly, when vegetarians gather together to complain about places with bad food options for us, we tend to focus our ire heavily on restaurants that think a deep-fried eggplant is a good vegetarian option. Unspoken but understood is that few people become a vegetarian in order to increase the amount of fat in their diet.

Yes, it's an imperfect system. Heaven knows nearly all desserts you'll find are vegetarian, and there's a robust market in vegan junk food. However, the one thing that being a vegetarian buys you is that you now have a socially acceptable reason to order a salad instead of fried chicken.

But now Beyond has made it clear that it wishes to disassociate vegetarianism from this traditional framework of "health," which is another code word for "low-calorie."  Instead, it seems Beyond wants to associate vegetarian food with another virtue, which is not at all about waistlines and individual health concerns but rather the health of the planet.

As endlessly endlessly documented by the press in the face of the Beyond trend, these foods have almost as much saturated fat as red meat — and that's without the deep-frying process that will be added by KFC's new chicken-free chicken. The health incentive for ordering a vegetarian plate has been completely removed from the equation.

The only possible reason for ordering a Beyond meal is to reduce meat consumption, on the grounds that eating meat is contributing to the destruction of our planet. In other words, Beyond hopes that the concept of "good" food isn't about calorie count but rather about social responsibility.

I'm on the record as being skeptical of the Beyond Burger, because of my entirely selfish concern that it will replace the tastier and more diverse vegetarian options currently available at restaurants. But I'm even more skeptical that much will come from this attempt to teach Americans how to reimagine their moral framework of food away from individualistic notions of health and weight management and toward a more outward-facing morality centered around reducing our carbon footprint and the amount of suffering we inflict on animals.

Part of the problem is that food is so personal. It's all about the body, both in the visceral experience of eating and in our very personal concerns about how the food that touches our mouths affects our bodies.  Even sex, which often involves other people, isn't quite so personal. Even though we eat in groups — though less so, interestingly, with fast food, which is often consumed alone and in haste — it's difficult to think of food outside the parameters of our own bodies.

Perhaps the bigger problem is capitalist consumerism, which produces the markets which Beyond specifically targets in order to sell its products. Capitalist marketing thrives on individualism; it's about convincing the consumer that a product enhances his or her own individual life, and no where is that more potent than when it comes to food.

Beyond is trying to flip that notion on its head by marketing food as good primarily for the planet. They're not even really trying, as far as I can tell, to market their food as a status symbol in the same way stores like Whole Foods have done with vegetarian foods in the past. Instead, they're putting these fake meats into fast food joints which exist outside — and often, in direct defiance of — the status-seeking modes of eating. No one can tell your fried chicken isn't chicken at KFC. Nor is it a food aimed primarily at vegetarians, who learned long ago not to eat at KFC. It's a food that offers no real personal benefits at all to the person who picks it over the regular fried chicken.

Can a marketing strategy that defies everything we know about consumer product marketing work? I'm skeptical. Beyond is getting a lot of press now, precisely because it's so weird to think of a vegetarian product that's not for vegetarians, not for health and not for weight loss. But there have been previous attempts to revise our understanding of what constitutes "good" food away from the low calorie framework, and all have failed. As much as we may want to think of "good" food in terms of the planet, we will always want it to be about our waistlines first.