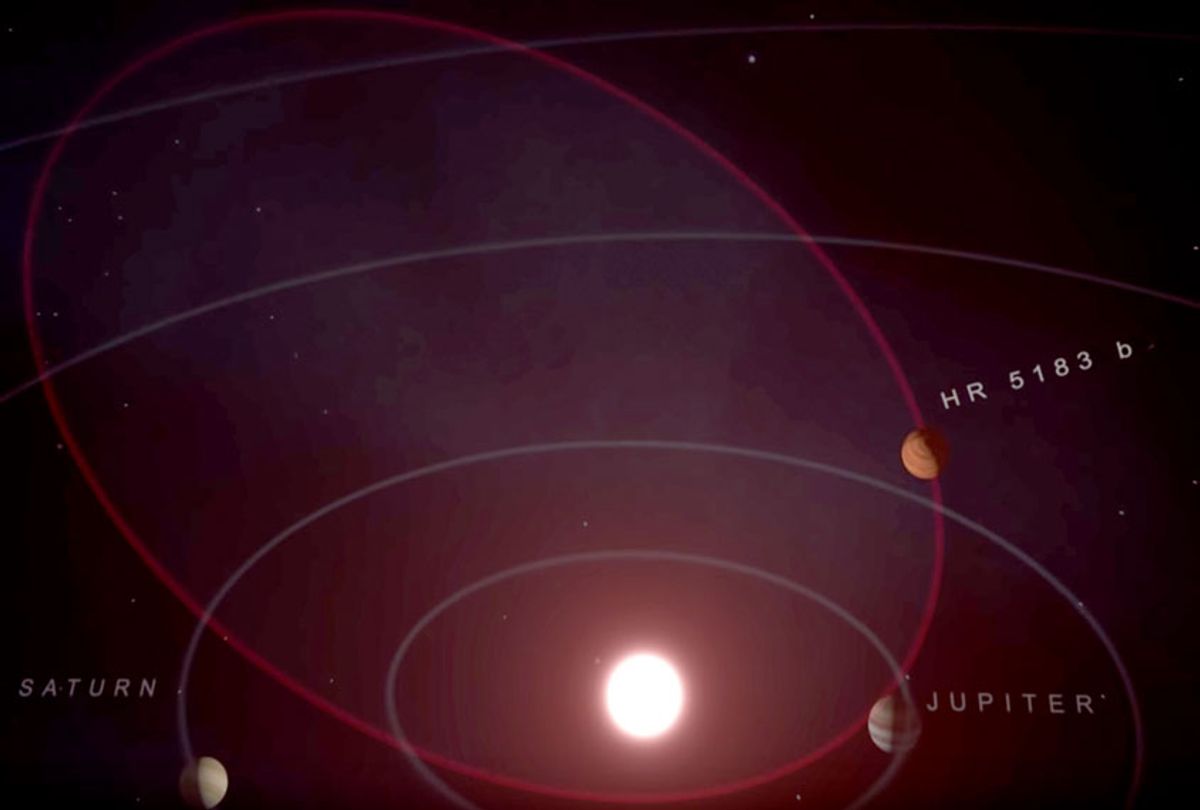 Astronomers have spotted a strange, first-of-its-kind exoplanet, meaning a planet that orbits a solar system beyond ours. Exoplanet HR 5183 b, a gas giant three times the mass of Jupiter, swivels around its parent star in a far-flung, egg-shaped path that oscillates from being near and then far from its sun. For comparison, if HR 5183 b was in our solar system, its orbit would take it from the asteroid belt to beyond the orbit of Neptune, our sun's most distant planet.

The planet is particularly unique given what we know about solar systems. Conventional wisdom and observational evidence dictate that near-circular orbits, like the ones occupied by the planets in our solar system (including Earth), are most stable in the long run and thus most often observed in mature solar systems. If planets oscillated wildly in their orbits, in a manner akin to HR 5183 b, collisions would be common; it is unclear if any other planets orbit parent star HR 5183.

The sun's planets — and the proto-planets that preceded them — may have had much more chaotic, elliptical orbits in the days of the early solar system. To wit: over 4 billion years ago, Earth was struck by a Mars-sized body named Theia. Owing the current stable orbits of solar system bodies, such massive collisions are (thankfully) no longer possible.

These findings will be published soon in a study in the Astronomical Journal. Other giant planets with slingshot-like orbits have been found around other stars in different solar systems, but none of those worlds were located at the outer edges of their star systems like this one.

"This planet is unlike the planets in our solar system, but more than that, it is unlike any other exoplanets we have discovered so far," Sarah Blunt, lead author on the soon-to-be published study, said in a media statement. “Other planets detected far away from their stars tend to have very low eccentricities, meaning that their orbits are more circular.”

Blunt added since this planet is so unique, it “speaks to some difference in the way that it either formed or evolved relative to the other planets."

"This new exoplanet is extreme and super-interesting in many ways," he said in a statement. "It has a record-long orbital period of over 50 years, which is much longer than for other planets detected by this technique. And, it orbits its host star on a very elongated, egg-shaped orbit.”

Researchers discovered the exoplanet using the radial velocity method, a discovery method that identifies new worlds by tracking how their parent stars “wobble” in response to gravitational tugs from those planets. Endl said “something dramatic must have happened to change the shape of its orbit.”

Since the 1990s, astronomers have been watching HR 5183, the planet's parent star. The planet is said to circle its star roughly every 45 to 100 years. HR 5183 b spends most of its time loitering in the outer part of its star’s planetary system, then it accelerates and slingshots around its star, consistent with Kepler's laws of planetary motion.

"For almost 20 years our data did not show any sign of a planetary companion.” Endl said. "And then we observed the 'slingshot' which only lasted about two years.”

It is odd to imagine a massive planet slingshotting around its star, not unlike a comet. When asked what this solar system could potentially look like,  Avi Loeb, chair of Harvard's astronomy department, told Salon via email: “In order to get a planet launched on such an elongated orbit from an initially circular orbit, it needs to cross the orbit of another giant planet or a passing star.”

As to why this has never happened in our own solar system, Loeb said the orbits of Jupiter and Saturn don’t come close enough for Jupiter to give Saturn a gravitational "kick."

“The force of gravity during the encounter of the two planets needs to exceed the force that keeps the kicked planet on a circular orbit around the Sun,” Loeb said. “Since the Sun is a thousand times more massive than Jupiter, the perturbing planet needs to pass very close to the kicked planet.”

He added: “If a passing star gives the jolt, the passage could be at a distance comparable to the separation of the kicked planet from its host star.”

Endl said we usually think planet form in circular orbits, but a “close encounter with another massive planet might have thrown this one on its elongated path around the star."

Researchers said this planet reiterates how little we understand about planets outside of our solar system. Prior to 1995, the year the first exoplanet was discovered, we did not even know if there were planets in other solar systems. Nearly two decades later, 4,000 exoplanets have been discovered.

"To understand the planetary systems throughout our galaxy, examples of the full range of possible systems need to be found and studied," Phillip MacQueen, technology lead and observer for the McDonald Observatory Planet Search, said in a statement. "While spacecraft have found thousands of systems, a system like HR 5183 is quite unlikely to be found by past or current spacecraft.”