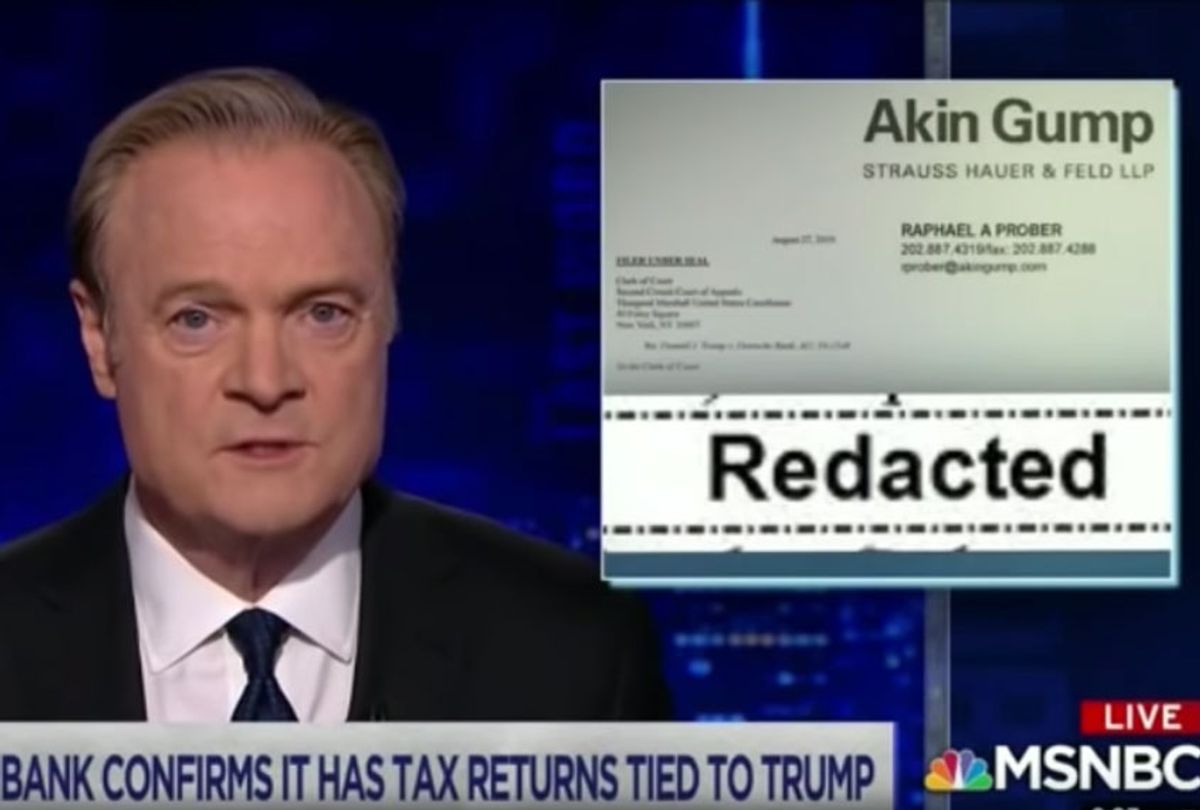 President Donald Trump lashed out at MSNBC host Lawrence O'Donnell in a series of tweets Thursday morning, less than 12 hours after newsman offered an on-air retraction of his thinly-sourced report alleging the president had obtained loans from Deutsche Bank that were co-signed by Russian oligarchs "close to Vladimir Putin."

"The totally inaccurate reporting by Lawrence O'Donnell, for which he has been forced by NBC to apologize, is NO DIFFERENT than the horrible, corrupt and fraudulent Fake News that I (and many millions of GREAT supporters) have had to put up with for years," Trump tweeted. "So bad for the USA!"

In another tweet, the president added: "Crazy Lawrence O'Donnell, who has been calling me wrong from even before I announced my run for the Presidency, even being previously forced by NBC to apologize, which he did while crying, for things he said about me & The Apprentice, was again forced to apologize, this time for the most ridiculous claim of all, that Russia, Russia, Russia, or Russian oligarchs, co-signed loan documents for me, a guarantee."

"Totally false, as is virtually everything else he, and much of the rest of the LameStream Media, has said about me for years," he continued. "ALL APOLOGIZE!"

O'Donnell admitted Wednesday that he had made an "error in judgment" and should not have reported on air Tuesday that Trump had received loans from Deutsche Bank co-signed by Russians — information he said he had obtained from a single source and was not verified by MSNBC or NBC News. O'Donnell formally retracted the statement on air.

"The Last Word" host opened his show Wednesday night by noting he "repeated statements" from a "single source" about the president's finances and loan documents with Deutsche Bank, which were not ready for broadcast. O'Donnell said he did not go through the network's "rigorous verification and standards process" before repeating the claim, adding that "had it gone through that process, I would not have been permitted to report it."

"I should not have said it on air or posted it on Twitter. I was wrong to do so," the MSNBC added. "Tonight, we are retracting the story. We don't know whether the information is inaccurate, but the fact is we do know it wasn't ready for broadcast, and for that I apologize."

Earlier Wednesday, O'Donnell tweeted that his earlier reporting, which cited a single unnamed source close to Deutsche Bank, did not meet "our rigorous verification and standards process."

"Last night I made an error in judgment by reporting an item about the president's finances that didn't go through our rigorous verification and standards," he wrote on the social media platform. "I shouldn't have reported it and it was wrong to discuss it on the air."

In his tweet, O'Donnell did not admit inaccuracy, retract his statements or apologize. He merely admitted he made an error by not going through the proper verification process.

On his program Tuesday night, O'Donnell reported that an unnamed source close to Deutsche Bank had revealed to him that loans taken out by Trump were co-signed by "Russian oligarchs" close to Putin.

In discussing his reporting, O'Donnell repeatedly said he wanted to stress that "if true," it would "explain every kind word Trump has ever said about Russia and Putin."

"I stress 'if true,' because this is a single source," O'Donnell said on his broadcast.

In closing his program Tuesday night, O'Donnell noted that neither MSNBC nor NBC News could not confirm his reporting. He said neither he nor his source had seen any documentation from Deutsche Bank supporting and verifying the claim.

"I want to stress that this is a single source — that has not been confirmed by NBC News," he said. "I have not seen any documentation from Deutsche Bank that supports and verifies this. This is just a single source who has revealed that to me, and that's where it stands at this point. It's going to require a lot more verification before that can be a confirmable fact."

CNN's Oliver Darcy reported Wednesday that MSNBC executives "were not informed about O'Donnell's reporting before he went to air with it," citing an MSNBC source. Darcy noted his source said that "had they known" about the host's reporting, it "would not have made it to broadcast."

MSNBC declined Salon's requests for comment regarding O'Donnell's reporting and whether he will face disciplinary action.

In response to O'Donnell's reporting, an attorney for Trump reportedly sent a letter on Wednesday to NBC News calling the host's reporting "false and defamatory." He demanded O'Donnell and NBC "immediately and prominently retract, correct and apologize" for the statements.

The attorney, Charles Harder, reportedly warned other news outlets against republishing the allegedly false statement, per The Hollywood Reporter. Salon is doing so, because it believes such republication is necessary to disclose what is a matter of public concern and protected by the First Amendment.

Additionally, Eric Trump, the president's son and executive vice president of the Trump Organization, tweeted Wednesday night that the company intends to take O'Donnell and MSNBC to court over the host's reporting.

"This was a reckless attempt to slander our family and smear a great company," Eric Trump wrote on Twitter. "Apologies are not enough when the true intent was solely to damage and cause harm. As a company, we will be taking legal action. This unethical behavior has to stop."

Eric Trump's message was shared to Twitter Wednesday night before O'Donnell formally retracted his reporting on air. In the wake of O'Donnell's retraction and apology, it remains unclear if the Trump Organization still plans to pursue legal action against the host and the network.

O'Donnell's Tuesday report came just hours after Deutsche Bank confirmed it possessed tax returns of at least one member of Trump's family in a letter to the Second Circuit Court of Appeals. The bank's statement was the latest development related to an ongoing effort by House Democrats to access the president's financial records.

During Wednesday night's broadcast of "The Last Word," O'Donnell noted the president's attorneys had demanded a retraction.

"Saying 'if true' as I discussed the information was simply not good enough," he said. "I should not have said it on air or posted it on Twitter. I was wrong to do so."