For millions of dogs, South Korea is hell on Earth

Summer in South Korea brings the brutal Boknal “dog eating days,” when more than a million dogs are slaughtered 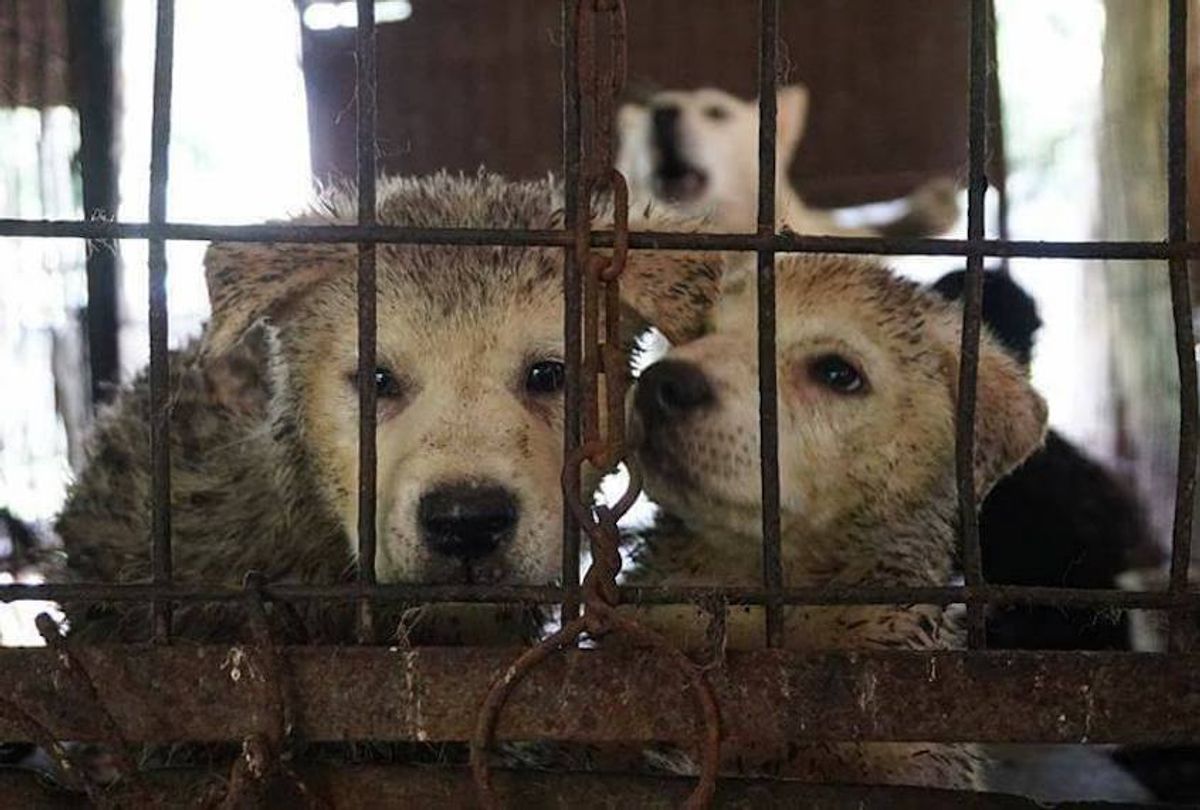 For dogs in South Korea, the sweltering summer months bring more than just brutal heat. The Boknal “dog eating days” — spanning the three supposed hottest days of the year in July and August — are when the majority of the 2 million dogs killed annually for meat in the nation will be tortured and slaughtered for bosintang soup.

Dog meat is falsely believed to have a “cooling effect” on the body, but there is no scientific evidence to back up this claim. In one study, the majority of bosintang soup consumers stated they ate dog for “health reasons,” and 33 percent of those surveyed believed it was good for men. These misguided beliefs are contributing to the needless suffering of millions of dogs.

It’s important to note that eating dogs has been a source of racial prejudice and stereotyping against Asians. “As recently as 2016, an Oregon senate candidate suggested that taking in Vietnamese refugees was a mistake because, in his words, they were ‘harvesting people’s dogs and cats,’”writes Soleil Ho, a Vietnamese-American chef who cohosts Racist Sandwich, a podcast on food and its intersections with race, class and gender, in the online magazine TASTE. “Dog eating has always been political for us.”

Clarissa Wei, a Hong Kong-based senior reporter for Goldthread, a digital publication focused on Chinese food and culture, who is based in Hong Kong, addressed the racist trope of eating dog meat. “Westerners have a tendency to see Chinese people as a monolithic mass,” she wrotevia email to Ho. “The people who do regularly consume dog meat are a small minority in a country with a population of 1.379 billion. Yet ‘dog-eating’ is a dominant topic when it comes to the Chinese.”

And while Asians must contend with this unfair stereotyping, dogs trapped in the dog meat industry must contend with hell on Earth. The animals are kept in cramped, filthy cages, their bones visible from starvation, and their skin covered in oozing sores from beatings and sickness. They are fed human waste and sometimes even other animals who have died from disease. Some dogs don’t make it until slaughter time, and are left for dead alongside their surviving cage mates. The animals are held in high, metal kennels, their feces dropping through the slats and piling up on the ground beneath them.

If the dogs manage to survive these conditions, a horrifying deathis waiting. Workers string up the animals by their necks and hang them, smash their heads open, or shock and burn them alive in the mistaken belief that dogs who are tortured as they die “taste better.”

South Korea is the only nation with large, commercial dog meat farms. In other countries, like China, the cost of commercializing the dog meat industry is too high, so it’s cheaper to steal companion animals and sell them on the black market. South Korea’s smaller size, collective adherence to traditional practices, absence of rabies and “stricter” regulations allow the slaughter to continue legally on an industrial scale.

But progress is happening within South Korea, with local, national and international activist groups changing hearts and minds. In June 2018, the city court of Buche on ruled that it was illegal to kill dogs for meat — the first ruling of its kind to determine that meat consumption is not a legal reason to slaughter an innocent canine.

The infamous Moran market, where 80,000 dogs per year were once brutally slaughtered, shut down in November 2018. And on July 1, 2019, Gupo market — South Korea’s second-biggest dog meat market and home to 19 dog vendors killing countless canines — closed its dog meat stalls in a two-year agreement that will hopefully lead to a permanent ban of dog butchers on the premises. In addition, numerous celebrities, such as Kim Basinger and Priscilla Presley, have used their platform to speak out against this abhorrent trade, raising awareness for the issue across the globe.

But as we mourn for the dogs killed in Korea, we must also realize a hard truth: Animal torture for the meat trade is also happening here, right now, in the United States. Western factory farms are often every bit as cruel as dog meat farms — sometimes even more so.

Of the billions of chickens and pigs raised for slaughter in the U.S., many are housed in filthy, disease-ridden crates and cages too small for them to turn around or spread their wings in. Chickens and turkeys are fattened until they can no longer stand under their own weight. And when it’s time for slaughter, they are electrocuted, have their throats slit, and are plunged into scalding water, sometimes while still conscious. Ultimately, the outrage over Korea’s horrific dog meat industry should serve as a gateway issue to force us to address and correct the abuse inherent in our own animal agriculture.

The global outcry against dog meat is strong — and growing. Earlier this year, the United States passed a ban on the human consumption of dog and cat meat, and Germany, Taiwan, Austria and Hong Kong have passed their own recent bans. A similar ban awaits vote in the U.K. Parliament, because as scarce as dog meat may be in the region, people are so incensed by the thought of eating companion animals that they are demanding laws against it.

While activists across Korea continue to push for change and local victories become more common, the South Korean Parliament has yet to vote on proposed legislation that would declassify dogs as livestock. Yet even without a national law, public perception may very well wipe out the dog meat industry in the nation soon.

“The Korean government is disappointing, but the younger generation does not eat dog meat,” said Nami Kim, founder of rescue and activist group Save Korean Dogs, a nonprofit based in Gimpo-si, a city in South Korea’s Gyeonggi Province, which has rescued more than 3,000 dogs from slaughter.

But as hopeful as the future may appear, there are still an estimated 3,000 dog farms operating in South Korea. We must continue speaking out until every single one of them is closed down, with the surviving animals sent to safe and loving homes.

Sign a petition urging South Korean Ambassador Cho Yoon-Je and President Moon Jae-In to work to end the needless suffering of millions of dogs, and officially ban the sale, breeding or consumption of dogs and cats for meat.